Convergence, or multiple features coming together, is one of the many things that’s made smartphones so useful, and now the same thing is happening in home security cameras. Cameras are being built into devices that watch for all sorts of other things, like the temperature in your house, or if you need to change the air filter in your furnace. And then there’s Kuna, a home monitoring camera-plus-intercom built into an outdoor light fixture.

Outdoor lights and home security are not a new idea, nor are outdoor lights with built-in cameras. However, most of those solutions record to a removable memory card, instead of streaming live video that you can watch remotely. That’s great for finding out details after someone’s broken into your house, but not for keeping an eye on it as it’s happening.

Kuna’s solution is to basically combine a streaming video camera like a Dropcam with an outdoor light. It has a speaker and microphone, so you can use it as a two-way intercom. And because it’s a light, you can use Kuna’s app to turn it on or off on a schedule, or when something — or someone — trips its motion detector. It’s $99 as part of an Indiegogo fundraising campaign, with an eventual plan to sell it for $269 early next year, bundled with a $5 per month service that lets you save footage to the cloud.

Most of the action is at your front door

Where most all home monitoring cameras have gone the indoor route, being outside is where all the action is, says co-founder and CEO Sai-Wai Fu. Citing data the company has collected on burglaries, Fu says that nearly all home robberies begin with people coming to the front door to see if people are home, which is why you want a camera there, he says. Most are working for a quick score, like empty houses.

“They’ll knock, then if they don’t hear anything, they’ll try the back door,” Fu says. “We learned from that pattern that it’s called ‘probable concern,’ and you can call the police and the police will come. You don’t have to wait until he’s [or she’s] busted something.“ By that logic, if you have two Kuna cameras set up to watch a front and back door, the company’s software will automatically send a high-priority alert when it sees this happening.

Most consumer-grade cameras are not rated for outdoor use, since life outside can be extremely brutal. There’s rain, snow, but also sun, which can bake the electronics and fry the camera sensor. Fu says that the company is still working out the weatherproofing technologies on the Kuna, but that the device has been tested to stand up to 100 degree direct sunlight as well as in humid environments. Fu says he’s working with a manufacturing partner in China to continue toughening it up before consumers get the first units next Spring.

Kuna’s camera records in 720p and has a 116-degree lens that can swivel (though isn't motorized). Instead of relying on battery power, it draws it from the 120 volt lines you’d use with a typical light fixture, and connects to the internet over Wi-Fi and to your smartphone over Bluetooth LE. By design, it’s about the same size as most fixtures, Fu says, so you probably won’t have to repaint the area or hire a contractor to install it. The company also designed the light in three different styles, with plans to offer more. The base itself, which includes the camera and all the wiring, has been designed to be “universal” so that you’ll eventually be able to attach just about any style of light that Kuna (or others) might offer later on down the line. 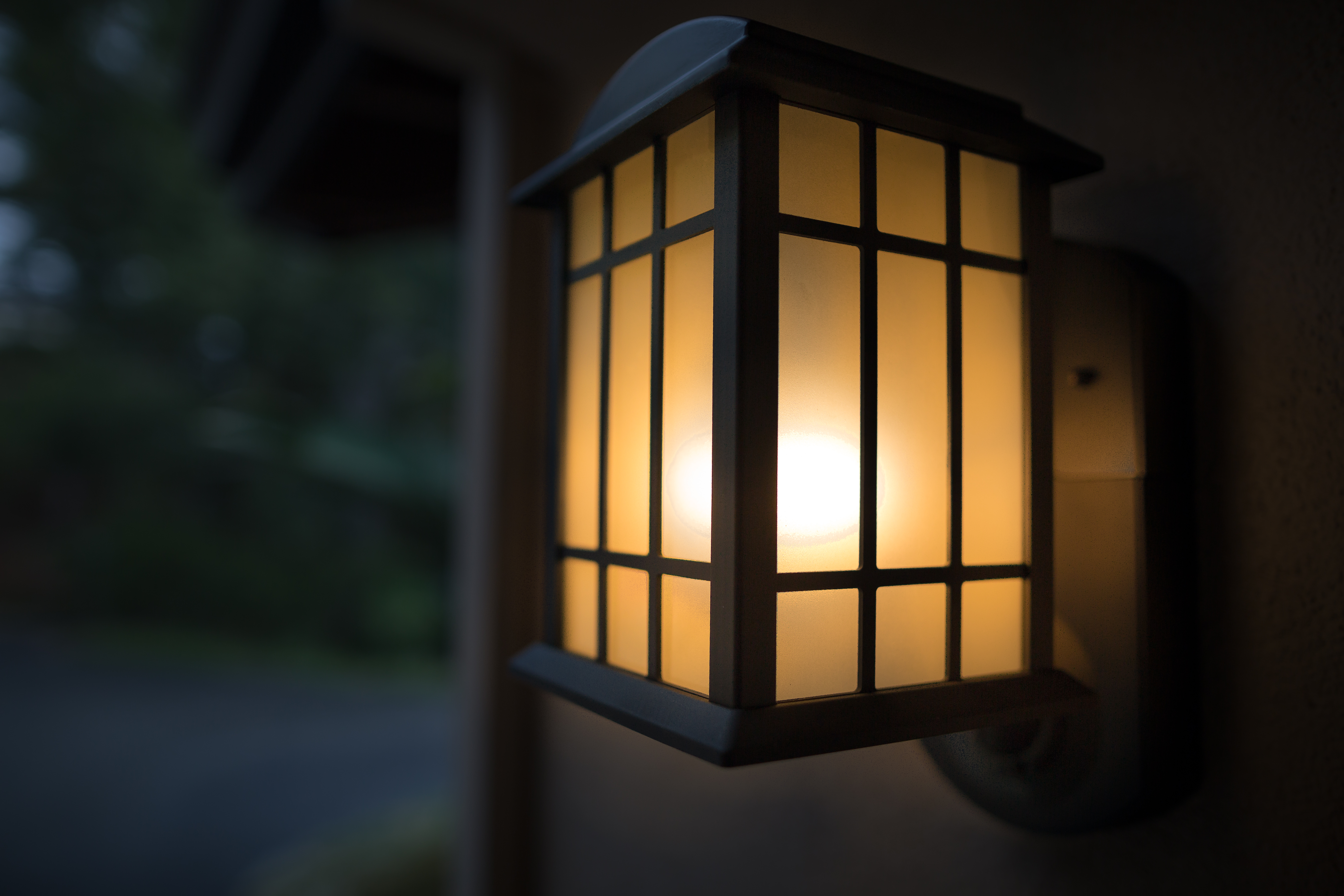 Even with these touches to the hardware, software is one of the most interesting things about Kuna. Fu’s co-founder Haomio Huang, who has a background in robotics and drones, created a way to record a number of responses you can use right from the app. That means that if someone were to come to your door, you could tell them to go away with your own pre-recorded voice, despite being in the middle of a meeting, or with a mouth full of food. Kuna sees these canned responses being used to tell a door-to-door salesperson you’re not interested, or asking a package delivery person to just leave a box.

“The base level is if it’s someone you don’t want to talk to,” Huang says. “The two inputs: ‘no thanks we’re not interested,’ and ‘we’re kind of busy right now, let me get back to you,’ let you deal with a lot of those kinds of situations.” In the future, Huang says, there might be the option to record entire possible trees of dialogue. But for now, the idea is just to let you respond without letting slip the fact that you’re not home.

It can tell if someone's loitering outside your house

On top of that feature, Kuna’s using computer imaging technologies that Huang says help it weed out types of motion, like telling trees and people apart. The same programming that’s watching what door people are going to also helps determine whether a person is just coming or going, or whether they might be up to something more malicious. This will be essential to keep people from being inundated with notifications.

“Some people like to know about everything; some people are like, ‘I only care about visitors and break-ins,’” Huang says. ”We can actually tell the difference of someone coming or leaving, or if they’re loitering there. We’ll be able to customize the alerts, get the visitor waiting, rather than leaving.”

The goal of the alert system, mixed with the option to talk to a person outside your house, is ultimately to keep potential home invaders from coming in, Fu says. He co-founded the company after nearly being a victim of home robbery by two men who he believes were there with a strong intent to enter his house. They began banging on his door in the middle of the day, asking for directions, which Fu says seemed incredibly odd. He ended up opening the door to talk to them, and then they left quickly when they saw that there was someone else in the house.

“When they started leaving, I said ‘whoa, that was really dangerous,’” Fu recalls. “I felt really exposed,” something he now says nobody should experience.