After having his home burglarized for a third time, Mark Richards decided that it was maybe a good idea to install a security system. It just so happened he had a background in low-powered Wi-Fi chips, as well as VoIP. So instead of buying one from a store, he decided to start a new company that makes security cameras. The result is a small, battery-powered camera called the Homeboy that records video and makes a terrible noise with a siren when it senses motion. It can be affixed to a ceiling or wall and run for a few months before its batteries need to be recharged. It also looks like a tiny spacesuit helmet.

Homeboy’s premise is to let you watch over your house with what Richards calls a "posse" of people, with everyone using their phones to get and manage alerts. Your posse can be family members or friends who can both arm and disarm the system. The company’s phone apps don’t show live video all the time, but will begin recording when the motion detector is triggered, and give the group a feed of that activity. Any video it records (while armed) is live within a few seconds so that you can check whether your TV is getting stolen or if it was actually just your cat that set off the motion detector.

The $149 camera has a built-in motion sensor, night vision, and the aforementioned screeching siren. The entire system, which goes on sale today, runs off a rechargeable battery for up to three months. To install it, you affix the small, circular base wherever you want, and the Homeboy attaches to it magnetically. You can then angle it, but there’s no panning or tilting like you’d get with some competing home security cameras that run around the same price. On the flipside, it’s a lot smaller than most cameras — cute even. 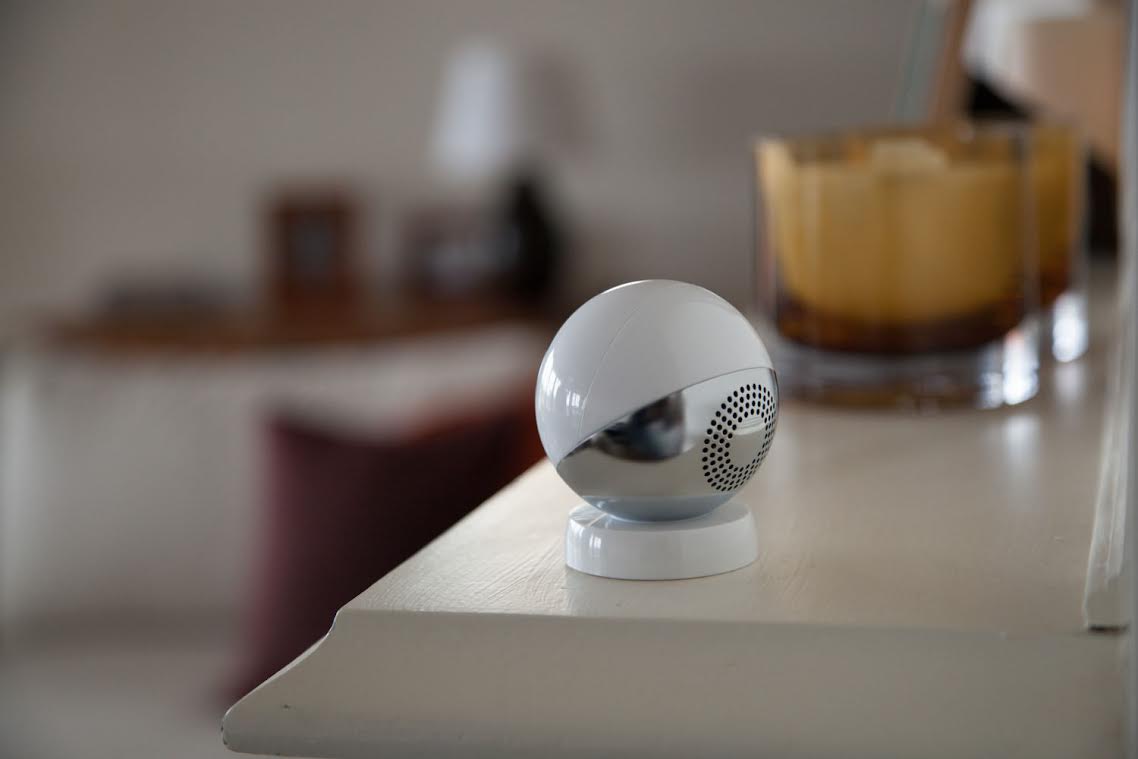 Homeboy joins an increasingly crowded market of home security and home-monitoring cameras, where there’s been a veritable arms race for video quality and to combine several features together. Products like Piper and Canary — which require being plugged in at all times — work as security systems, but also try to learn your schedule and double as companions to your HVAC system, telling you things like how hot or cold it is in any given room. There has also been a push from products like Dropcam and ArcSoft’s Simplicam to determine who or what something is by using computer vision technologies.

Richards is taking a more minimalist approach with Homeboy. The closest comparison is Netgear’s VueZone camera system, which also makes use of small, battery-powered cameras. Where the two are markedly different is that Homeboy doesn’t require a separate wireless base station; it connects straight to your Wi-Fi network. Also, most of Homeboy’s services are free, unlike Netgear’s, which charges for motion alerts, storage, and using more than two cameras. Any clips it records are stored for a month, and you’re free to send them directly to Dropbox, Google Drive, or some other storage service.

Richards says that beyond those distinctions, the camera was designed to be user-friendly for normal people, yet highly customizable for someone who is tech savvy. Out of the box, recorded video is stored on Homeboy’s servers, but you can also pipe it to a third-party storage service of your choosing. Advanced users can hook it up to If This Then That, so that it can post alerts to a Twitter account or connect with other smart home devices like Phillips Hue lightbulbs or a Nest thermostat. That means you could have a scenario where lights turn on somewhere in your house when it picks up motion by a window and you’re not home.

Richards eventually wants to make the device play nice with everything, going so far as to open it up to actual home security providers. Come next year, Richards says the company plans to let people pay a small fee to hire someone to watch over your alerts, so that when you’re sipping cocktails on some beach while on vacation, a security professional can check in remotely and call you, or the police, if there’s an actual issue. Right now, much of that actual security is limited to the siren for spooking intruders when the system is armed, as well as recording them in clips that can be shared with law enforcement.

Alerts, alarms, and video recording don’t happen unless you arm the system, which can be done manually in Homeboy’s app, or by tying it to your phone’s location so it will flip on when you're away from home. Otherwise, the Homeboy has been designed to just sit there, slurping as little power as possible. When the system picks up motion, it’s displayed in a chronological list that shows video clips and breaks up what kind of activity it spotted.

Most of the cameras in this space have been competing on video resolution and a 24/7 log of footage, which requires a steady power supply and lots of bandwidth. Richards argues that those two things combined kill the dream of having something you can set up and forget about for a few months at a time, and ultimately don’t really matter when you’re only using it as something to watch over your home when you’re away.

"The last thing you want to do is take down your camera to recharge it because you’re pushing 1080p video. When we looked at the use case, our use case is not browsing your pets, it’s security," Richards says. "You don’t need HD video to see, ‘Oh there’s someone in my house!’"