When Steve Jobs introduced Apple’s tablet in January 2010, he delivered an unequivocal answer. “The iPad, if you were to sum it up, is our most advanced technology in a magical and revolutionary device at an unbelievable price,” he said. The words appeared on the screen behind him as he said it, and then he repeated the line. Magical and revolutionary. It became one of Jobs’ most iconic phrases. What he was really saying was even simpler: the iPad is the future.

It’s hard to believe that it’s been nearly five years since Jobs introduced that first iPad, and even harder to believe how completely the iPad changed the way computers fit into our lives. The iPad brought tablets into the mainstream, upended the entire PC business, and for several years looked like a runaway success on par with the iPhone. The question wasn’t whether tablets would replace laptops for most people, but how quickly.

But pendulums tend to swing back, and the iPad’s rocket ride into the future seems to have slowed. Sales have flattened out and missed expectations, Apple’s Mac sales have held their ground, and phones themselves have gotten larger and larger — the iPhone 6 Plus is creeping right into iPad mini territory.

And now, just one month after releasing that larger iPhone 6 Plus, Apple is back with the iPad Air 2, an even-thinner reworking of last year’s iPad Air. It has a faster processor, a better camera, and a fingerprint sensor. You can get it in gold. It costs anywhere from $499 for a base model with a paltry 16GB storage to $829 for the top-end model with 128GB of space and a cellular radio. It is an iPad. It is the latest iPad. 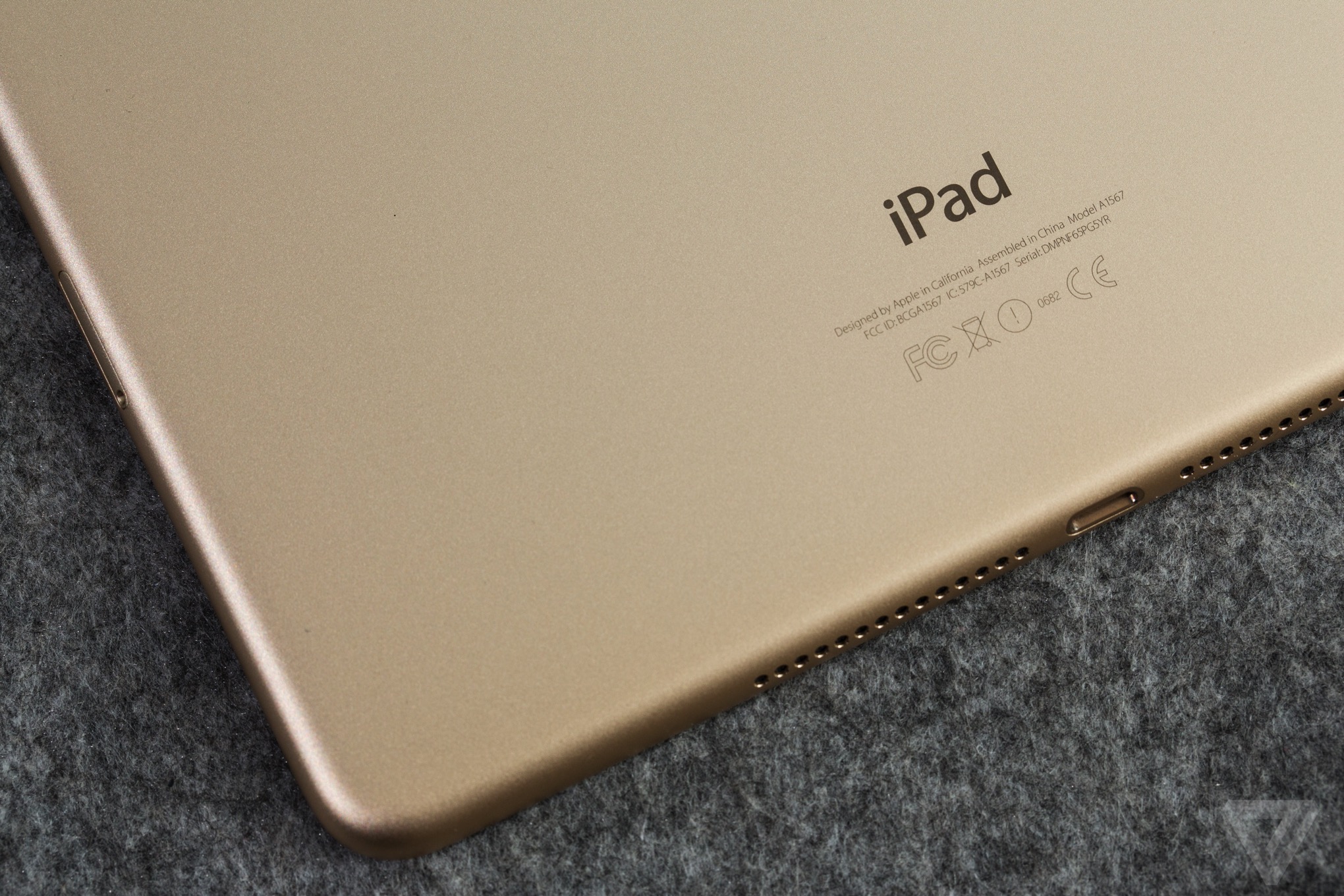 At the most basic level, the iPad Air 2 is a monumental achievement in the field of iterative improvement.

From a distance, it’s almost impossible to tell the iPad Air and iPad Air 2 apart. The basics of the design are exactly the same: the same proportions, the same polished chamfered edges, the same layout of ports and speakers and buttons. All that’s missing is the side switch, which was extremely useful as a rotation lock or mute switch. Locking rotation is now done with the control that appears by swiping up the Control Center from the bottom of the display; you can mute by holding to down volume button. None of this is easier or better than a switch, but so it goes with Apple’s ongoing quest for thinness. 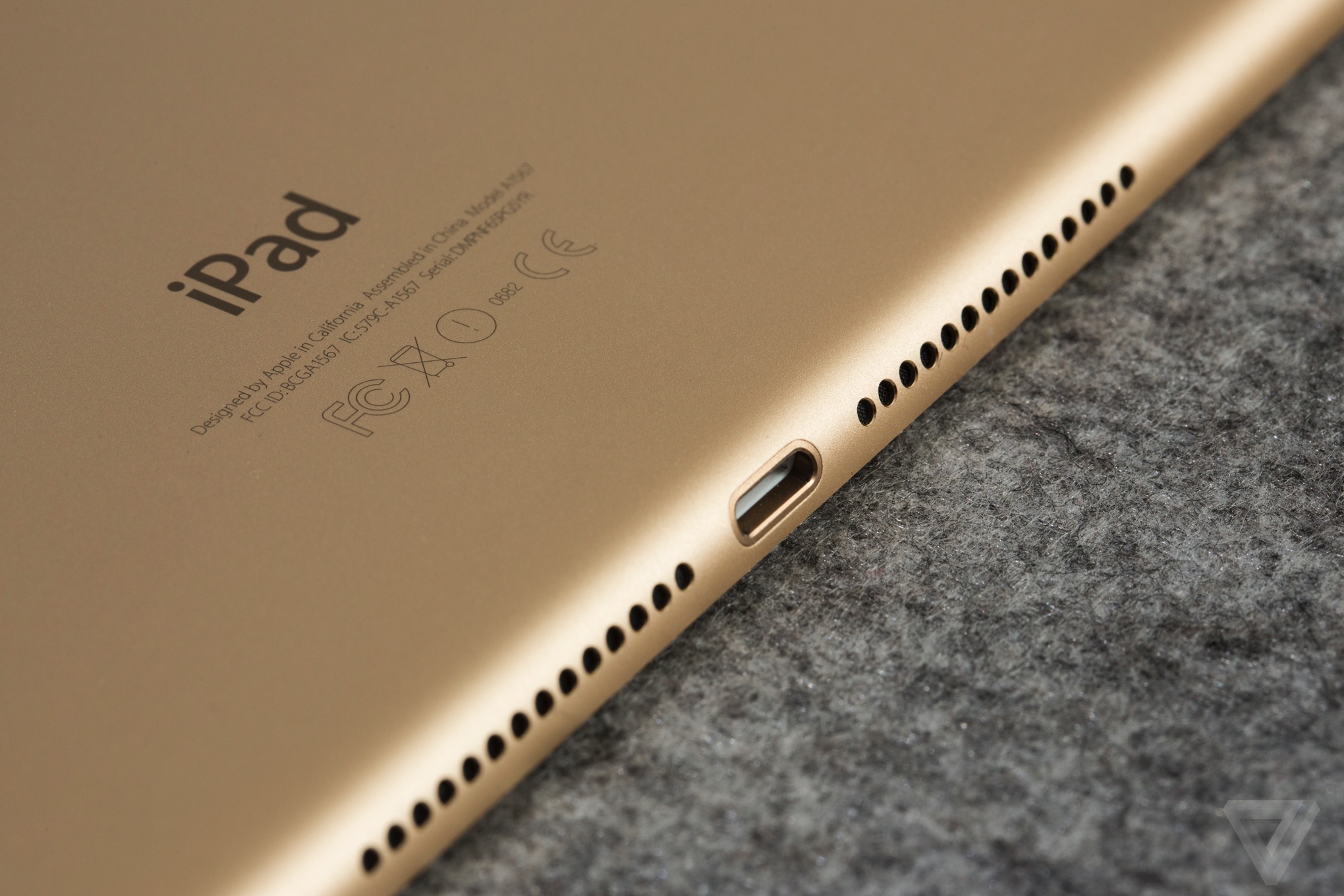 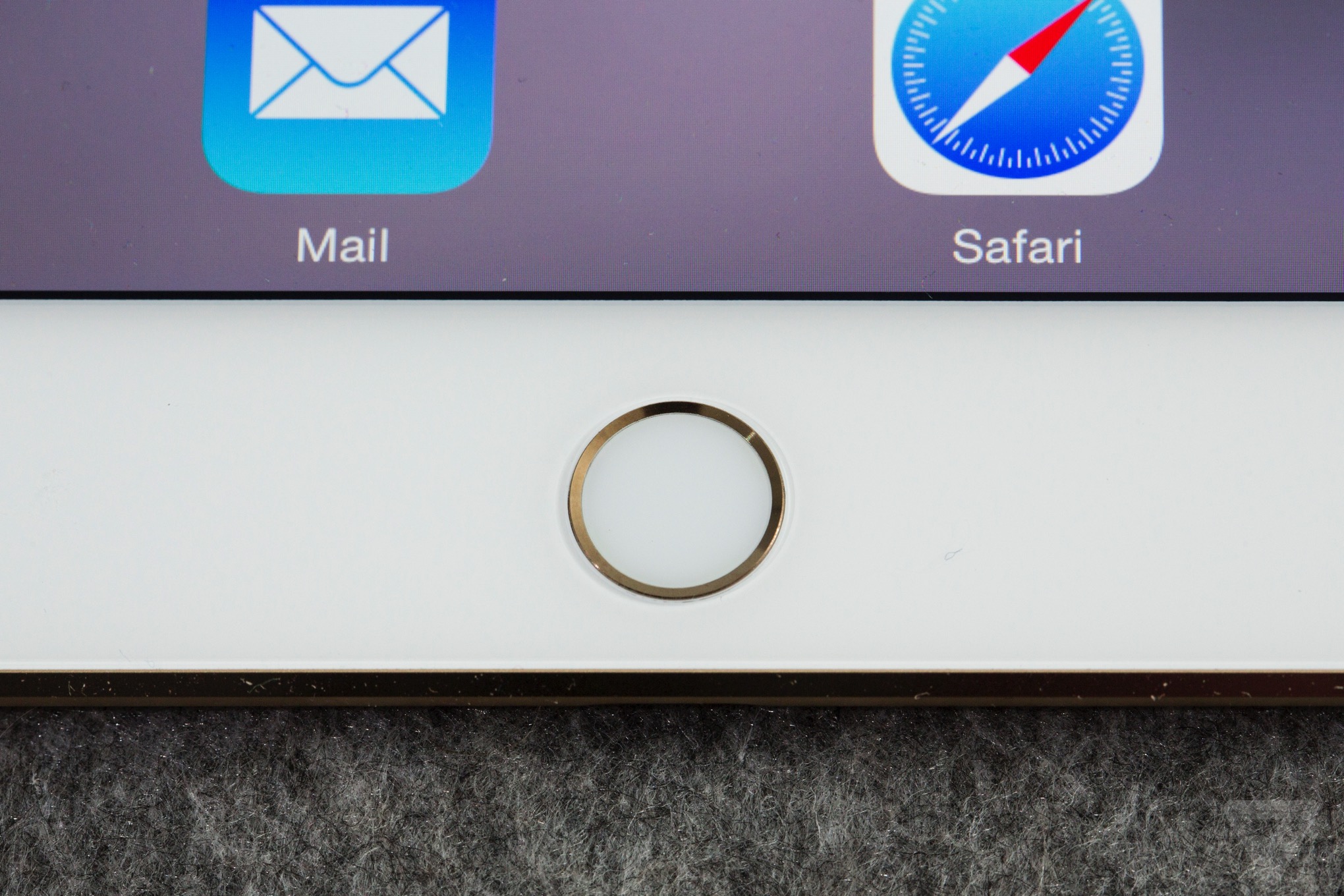 A monumental achievement in the field of iterative improvement

Pick up an iPad Air 2 and you’ll immediately understand why Apple pursues that thinness with such single-minded zeal. It’s so, so thin: 18 percent thinner than the older Air, and even slightly lighter. It’s hard to believe that there’s a computer back there, let alone a computer as powerful as the laptop computers of just a few years ago. If there is anything magical about this new iPad it is this, this feeling of impossibility. The Air 2 makes the original iPad look and feel archaic, like a horrible monster from a long-forgotten past.

That thinness is primarily achieved from a new optically-bonded display that virtually eliminates the air gap between the LCD and the top glass, making it seem like you’re touching the pixels directly. Apple’s making a big deal out of this, but it’s actually fairly late in bringing the technology to the iPad — every iPhone since the iPhone 4 has had a bonded display, the iMac has had one for a while now, and several competing high-end tablets have one as well. All for good reason: bonded displays look terrific. The Air 2 has a vibrant, sharp display that looks almost painted on. Apple says the new antireflective coating on the Air 2 reduces glare by 56 percent, but I didn’t really notice it making a huge difference; you definitely can’t use it in bright sunlight. My only issue was a pinkish cast on one of our review units when viewed off-axis; iPads have usually had near-perfect viewing angles and any inaccuracy is probably worth an exchange.

Just below the display you’ll find Apple’s Touch ID fingerprint sensor, which works as seamlessly as it does on the iPhone to unlock the iPad and pay for things using Apple Pay in apps. (There’s no NFC chip in the iPad Air 2, so waving it at credit card terminals is sadly not possible. Next time.) 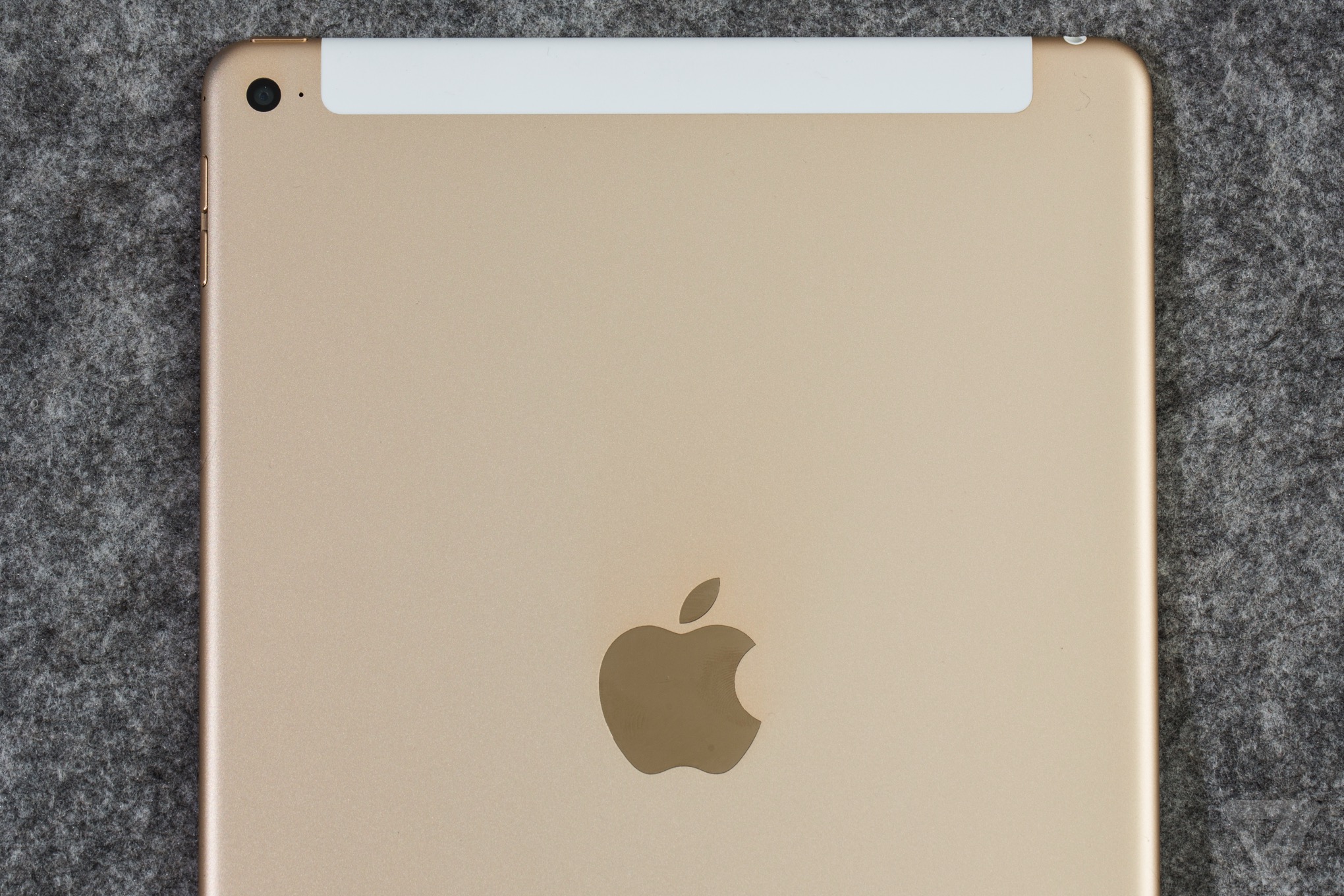 Inside the iPad Air 2 lies Apple’s new A8X chip, which is a variant of the A8 found in the iPhone 6 and 6 Plus with additional graphics capabilities. It’s ridiculously fast — noticeably faster to load web pages and launch apps than my iPad Air, and it has so much graphics headroom that I’m eager to see how game developers take advantage of it. But that might take a while: Apple still sells a full lineup of iPads with A7 chips (and the original iPad mini with an A5!), and it’s hard to see the incentive for developers to optimize iPad apps for the A8X until the installed base of Air 2s makes it worthwhile.

You’d expect a thinner device with a more powerful chip to take a hit on battery life, but the Air 2 lasted just as long as any of my other iPads — I went a full weekend of using it on LTE and Wi-Fi without charging it, finally plugging it in at 34 percent.

Lastly, the back of the new iPad features a new eight-megapixel camera, an upgrade from the five-megapixel shooter Apple’s used for the past few iPads. It’s a fine enough camera in bright light and just okay in low light, and nowhere close to the exemplary units in the iPhone 6 and 6 Plus — it's like a slightly worse iPhone 5 upgraded with iOS 8 tricks like slow-mo and timelapse video modes. It won’t blow any minds, but it’s a huge upgrade for the millions of people happily using the iPad as a camera — the steady wave of inevitable hardware improvement gently cresting over a nation of weirdos holding their giant viewfinders aloft, waiting for a moment worth sharing. 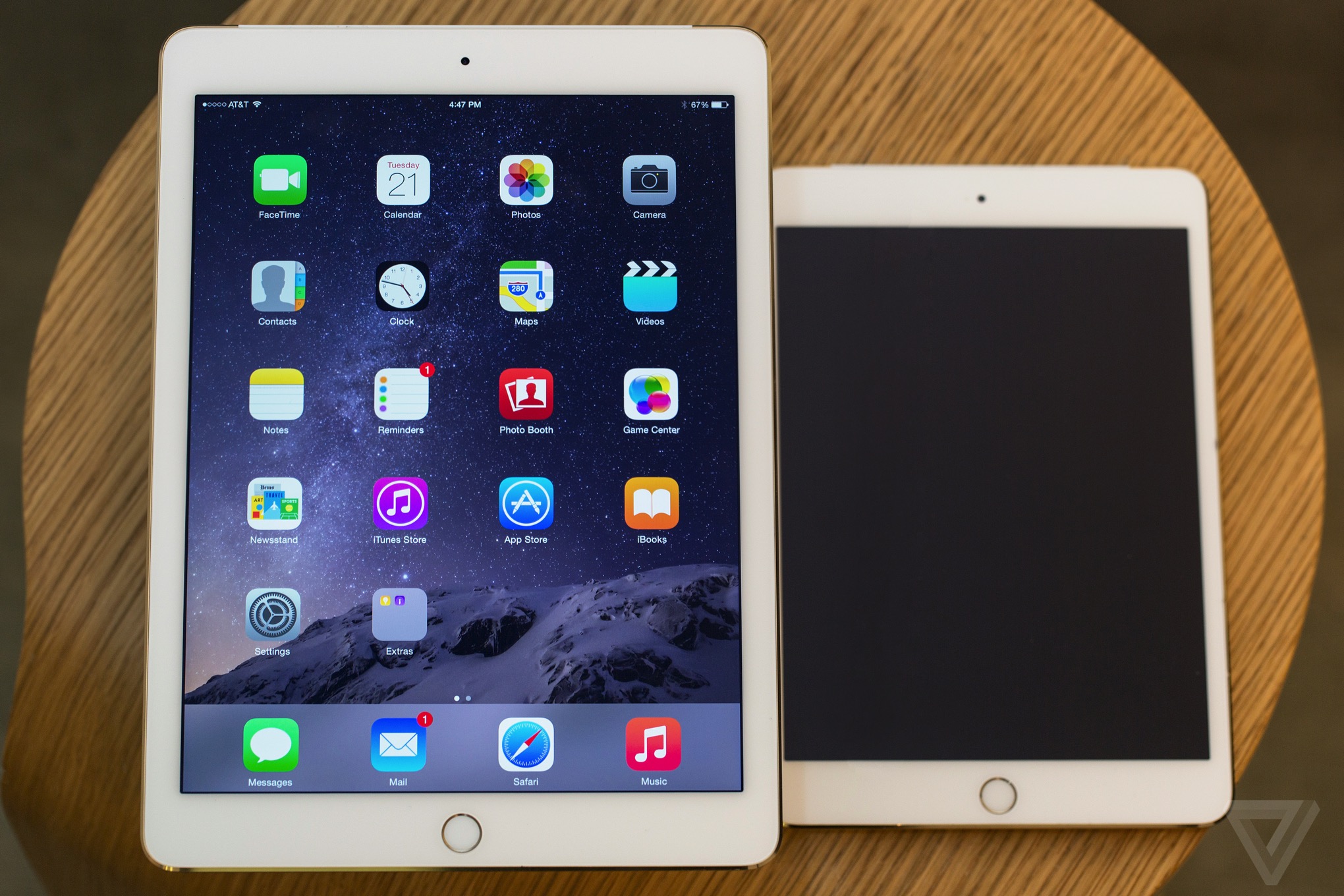 If the hardware of the iPad Air 2 demonstrates the overwhelming power of small iterative improvements, then the software represents the failings of that approach. The overall experience of using the iPad Air 2 in 2014 is a case study in missed opportunities and untapped potential. Apple has all but stopped adding tablet-specific features to iOS — the minor two-paned mode for landscape apps on the iPhone 6 Plus is a more significant rethinking of how to manage a larger screen size than anything added to the iPad Air 2 this year.

Just consider something as simple as browsing the web. On raw benchmarks the iPad Air 2 is comparable to a 2011 MacBook Air — which, again, is crazy — but the MacBook’s version of Safari is vastly more feature-rich and flexible. That MacBook will also allow me to run multiple apps alongside Safari and be far more productive than the iPad; we’re well past the point when Apple needs to figure out proper multitasking on its tablet. 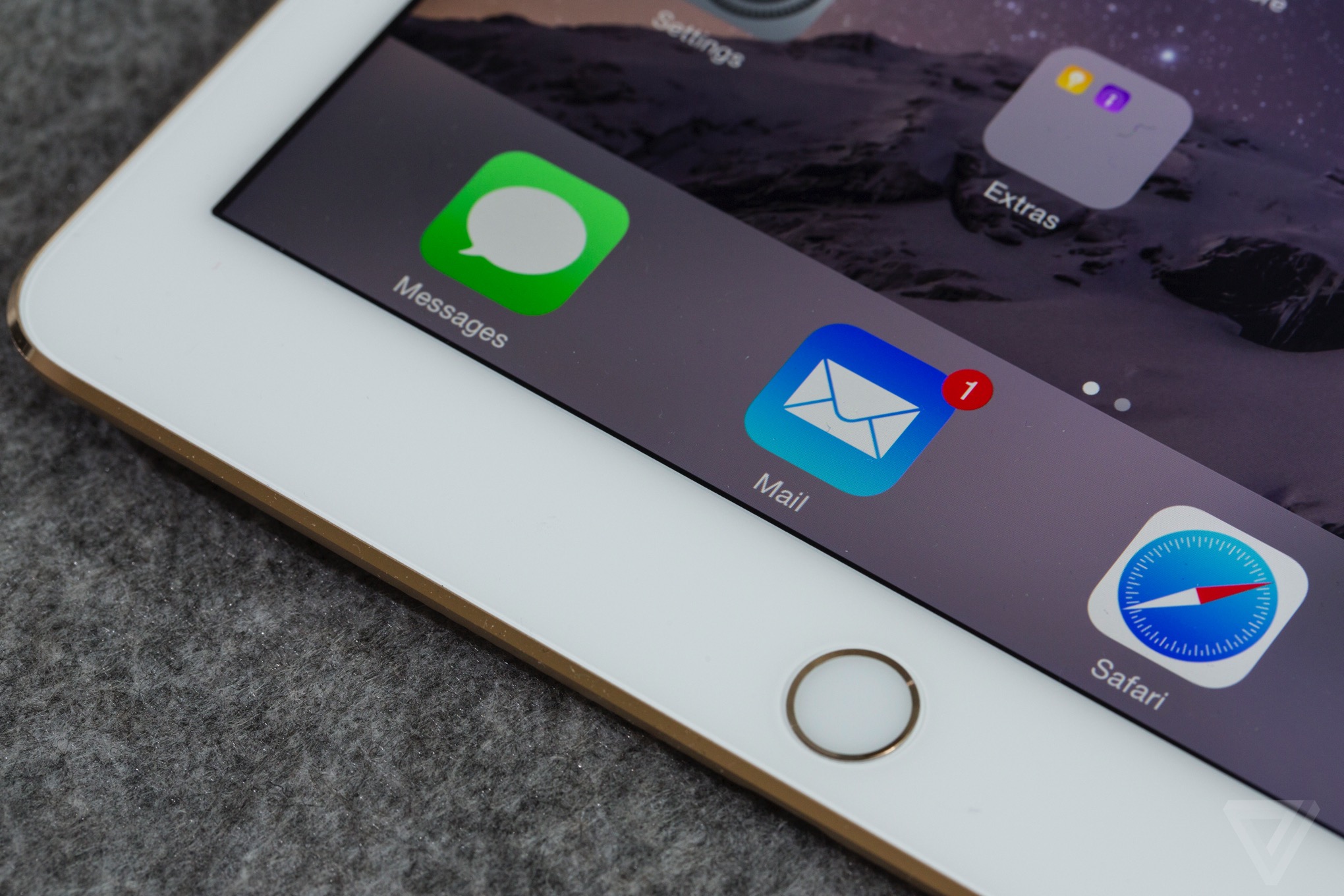 If I’m going to put down my large-screened phone and pick up another device, I want the cost of that switch to buy a dramatically improved experience, not simply a bigger screen. iOS 8 and OS X Yosemite are designed to make the transition from iPhone to Mac easier than ever with features like Handoff and Continuity; there’s hardly any reason to take a pitstop at the iPad along the way.

A case study in missed opportunities and untapped potential

And in moments when having an iPad does make sense, it’s missing things that would make it absolutely sing. My wife loves to borrow my iPad when she goes to the gym, but there’s no multiple-user support as with Android tablets or Amazon’s Kindle Fire line, so she can’t use it to check her email instead of mine. There’s no guest mode, so when I spent the weekend with friends passing the Air 2 around to pick songs from Spotify, I had to choose between telling everyone my passcode or just turning the lock off entirely. David Pierce had logged into his iCloud account on one of our Air 2 review units, and when I went outside to take photos with it I realized that I was shooting directly into his iCloud camera roll. We had literally programmed our fingerprints into it, but it couldn’t tell us apart.

I said it in last year’s iPad Air review and I’ll say it again: it feels like Apple is so content with its commanding lead in the tablet market that it’s willing to let the iPad’s superlative hardware sell itself instead of figuring out new places for it to go. For better or worse, Apple’s allowed the iPad to become the giant iPhone its critics have always insisted that it is, and in a world with giant iPhones that’s a tough spot to be in. 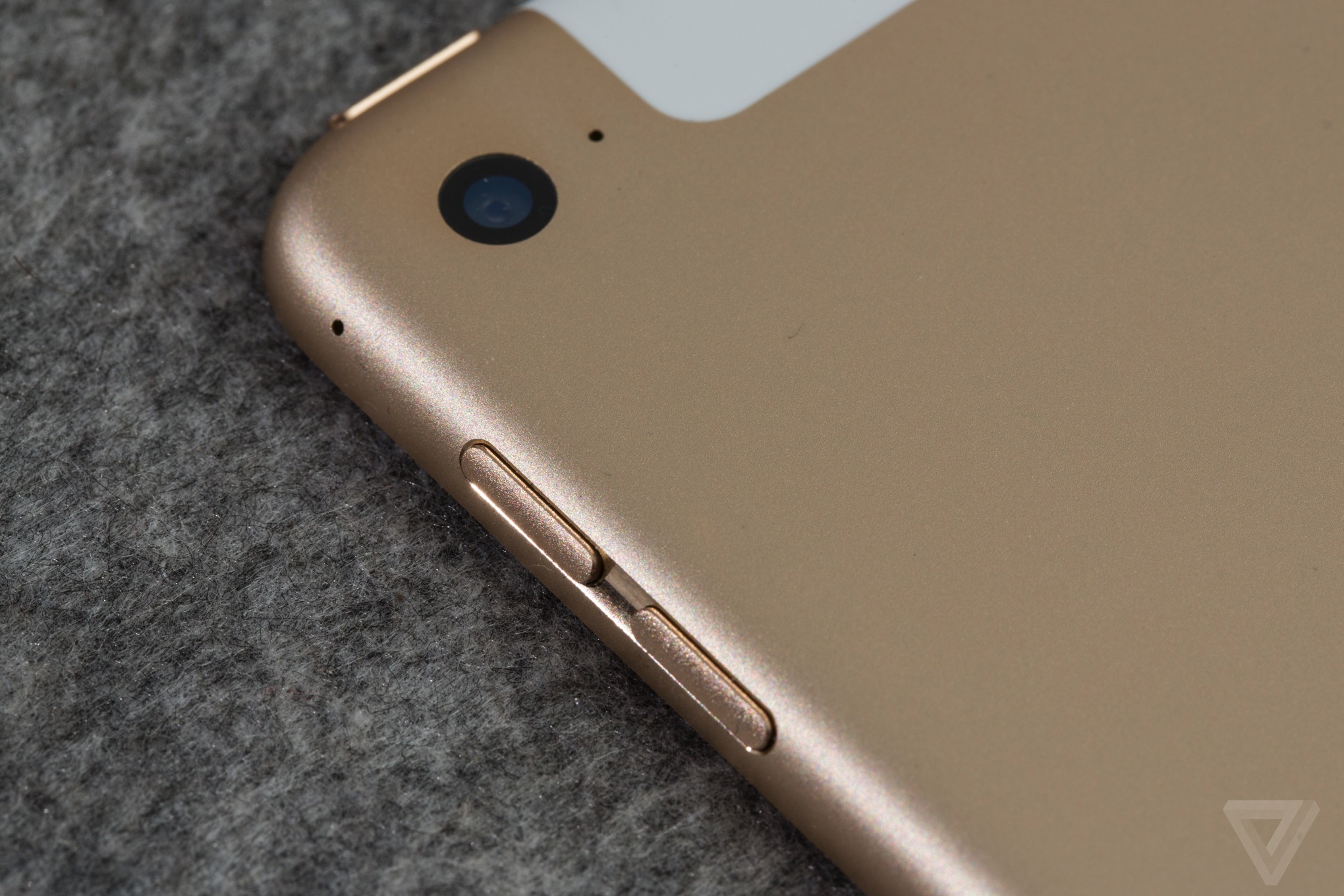 You think about all the things you’d like an iPad to do and it suddenly clicks.

Every single one of Apple’s other devices pulls you into a bubble — from the on-my-body Apple Watch to the always-with-me iPhone to the my-life-is-on-here MacBook. I don’t want to hand any of those things to anyone else; they’re mine. But every time I hold an iPad, I’m eager to show it to someone, to pass it off, to share the experience with the people around me. Tablets are social in a way that no other device except the television is social, but there’s nothing about the iPad or iOS 8 that recognizes this essential fact. It’s time for Apple to start pushing the iPad forward again; not just in hardware but in all the places it should fit into our lives.

There’s no question that the iPad Air 2 is the best iPad ever made. It’s also the best tablet ever made — its incredible hardware and enormous ecosystem of apps offer a commanding advantage over the competition. But it’s not Apple’s best product; it’s not the company’s most advanced technology in a magical and revolutionary device at an unbelievable price.

$499.00 at Apple Store$499.99 at Best Buy
How we rate and review products
Most Popular
From our sponsor
Advertiser Content From