This is how humanity ends. We've fought our way out of caves and from shorelines, built cities, built rockets, finally slipped the surly bonds of Earth. We've made it to a new planet and conquered it, we've tamed the wildlife — worms and krakens and monsters — and we've come to a new plane. A new plane of understanding, a new plane of being, a new plane of existence itself. Our minds have been opened. We have transcended our humanity. We step into the light, and we see four words that congratulate us on our new consciouness.

Civilization: Beyond Earth ends with something of a whimper, but this turn-based strategy game is more about the journey than the payoff. It casts you as leader of one of eight future factions, born from an Earth that's rapidly running out of resources, and recently landed on a new planet. Despite its extraterrestrial setting, Civilization: Beyond Earth follows in footsteps laid down by historical antecedents in the Civilization series. As in other "Civ" games, I chose a starting location for my capital city, I pushed out my borders by growing my food supply, my infrastructure, and my economy, and I built both new colonies, and a military force to protect those settlements as I expanded across the map. 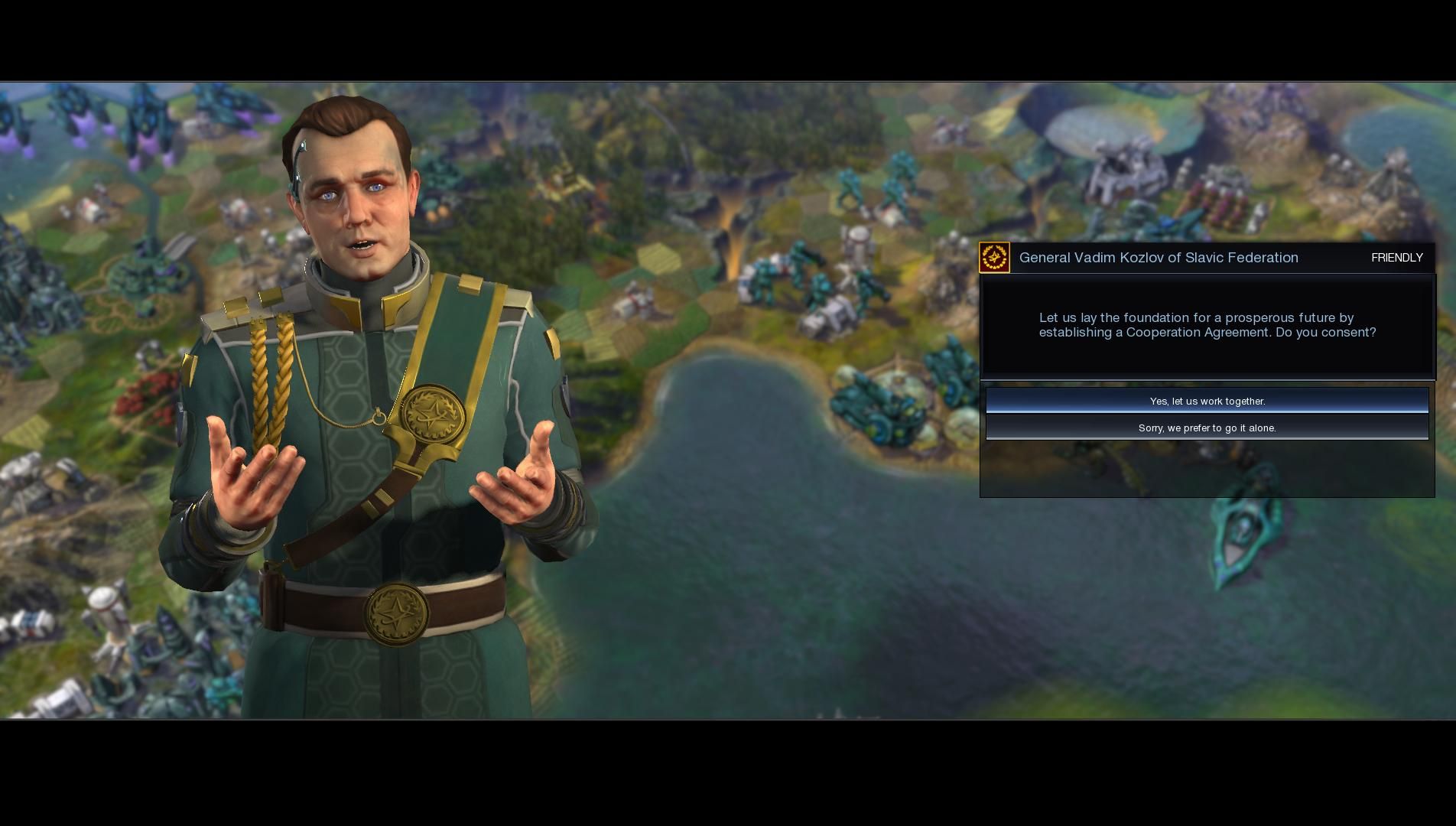 But Beyond Earth has big differences to other Civ games. Where they have been grounded in fact and history, Beyond Earth has a taken on a sci-fi aesthetic. My capital city wasn't built from the ground up out of mud and thatch, but plopped down as a big silver disc, unfurling after crash-landing from space. I wasn't beset by barbarian forces keen to knock down my timber gates; I was at the mercy of a gigantic marauding death worm who smashed up my bio-centers and geothermal power plants for fun.

Cities come crashing down from space

These cosmetic changes make mechanical differences to a series that's been about the same things — research, expand, prosper — since 1991. There's much more to do in Beyond Earth's first few turns than there was in the most recent major Civ game, Civilization 5. Alien nests close to growing cities mean a steady stream of chitinous monsters appearing at your doorstep, keen to see your new colonies and maybe eat your legs. Ignore them at your peril.

Colony units are how Civilization leaders build new settlements. Essentially space-age clown cars, they're crawlers that move slowly across the map, before unpacking themselves into small cities, complete with a ready-made human population. Landing on an apparently uninhabited island, I built one and sent it out into the wilds a few hexagonal spaces over. The armored car, and its unarmored passengers, were torn apart in one turn by a swarm of razor-clawed bug beasts.

The sci-fi setting also means that the stories Beyond Earth spits out can feel more personal. I wasn't George Washington laying down railroads right on schedule in the 1800s, I wasn't Gandhi researching theories of nonviolence on cue a few decades later. I was me, boss of a newly unified France and Spain, discovering how I could fire tiny robots into the bloodstreams of my citizens to keep them alive longer, or how I could build giant bipedal battlesuits in the year 2700-something. 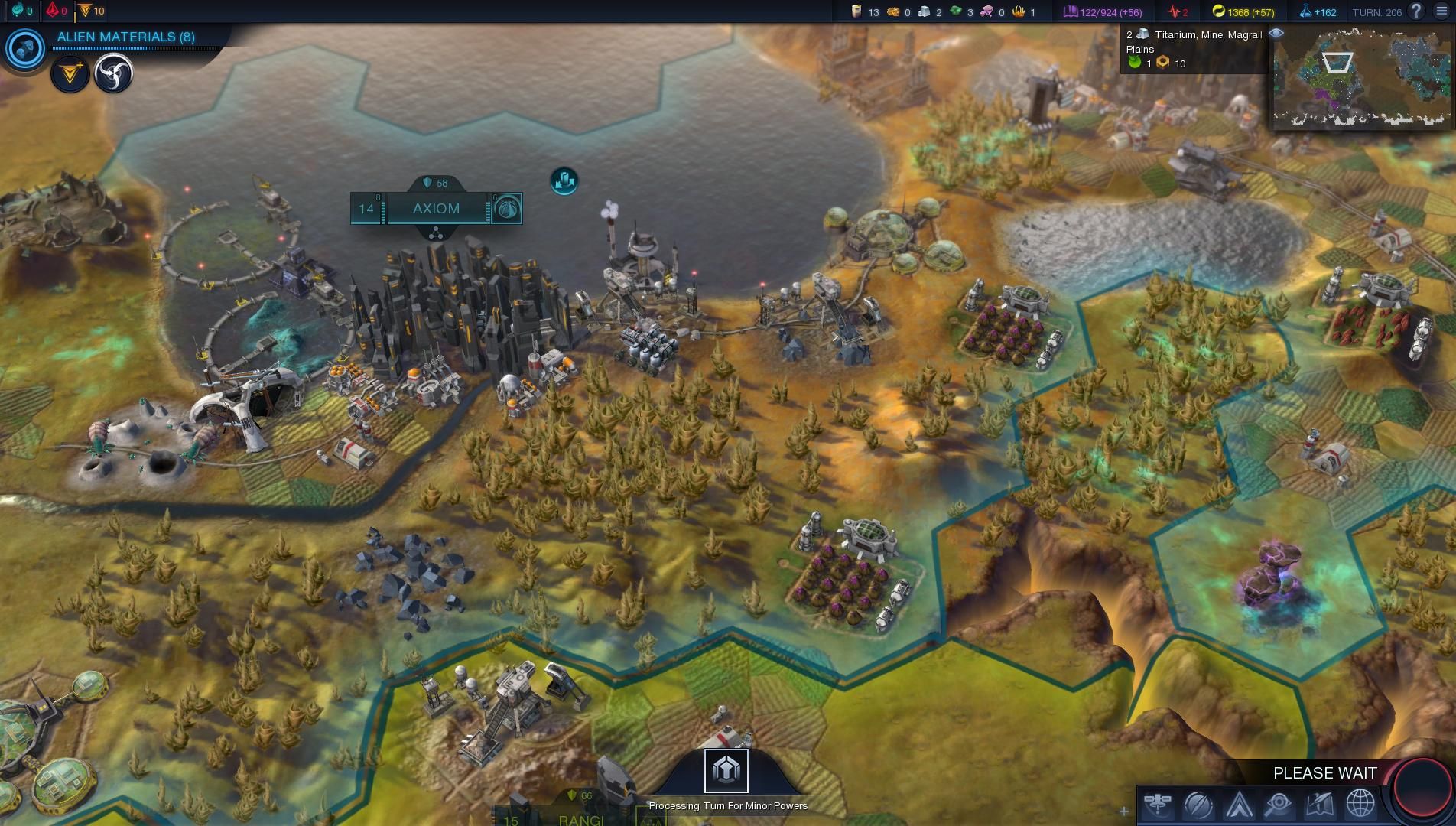 Not being tied to real history gives freedom to how you play Beyond Earth. Most strategy games have a tech tree that players climb, branch after branch, reaching the best toys and technology at the end of the game. In previous Civilizations it meant you won't invent the computer before you invent the printing press, or the jet engine before the wheel - but Beyond Earth has a tech web that radiates out from a central point. It let me race towards a future where I could upload my consciousness to the cloud before I had a thorough understanding of how boats worked.

This freedom means each of my campaigns felt very different to play. Dropped in the center of a continent between four wary opponents, I cultivated diplomatic ties with neighbors, built up reserves of petroleum, titanium, and hovering alien "floatstone," and made myself indispensable to those who would attack me. Placed at the far side of the map with a small ocean between me and my cohabitants on the new planet, I built up a powerful military in secret and launched an amphibious invasion, sweeping across the planet with mechanized forces.

But this sci-fi setting also makes Beyond Earth more abstract than previous Civilizations. When you research the wheel, you expect to be able to build a cart. When you research gunpowder, you can invent the gun — they're real technologies with obvious real-world applications. When you research hypercomputing, and then follow it up by unlocking the secrets of neural uploading, you can unlock Beyond Earth's ANGEL, a "highly-advanced walker" with "heavy armaments and exceptional agility." I spent a chunk of my tens of hours with Beyond Earth simply digging into its tech web, trying to remember the substantial differences between orbital automation and orbital networks, protogenetics and photosystems.

When you research neural uploading, you can build a super-advanced bipedal mech

This layer of obfuscation is present across Beyond Earth. The game should be an easy jumping-on point for Civ series first-timers: its resources are fairly easily defined and understood – food makes more people, production makes stuff faster, energy lets you buy things like buildings, and science makes you research ideas quicker. But that interaction is buried beneath a UI that muddles the clear links between these elements, hiding major distinctions between resources and strategic resources in a "Civilopedia" that's both deeply boring and incredibly abstract to read.

This problem is joined by a few other UI annoyances. When allies come knocking, asking me to join their wars against their rivals, I was unable to click away to check their target's strengths, weaknesses, and allegiances, without confirming I'd either join the war in 10 turns, or sit the whole thing out. I took to keeping a real-life notebook of my opponents, their previous actions, and their dispositions toward me. Polystralians, it says, are "total dicks." 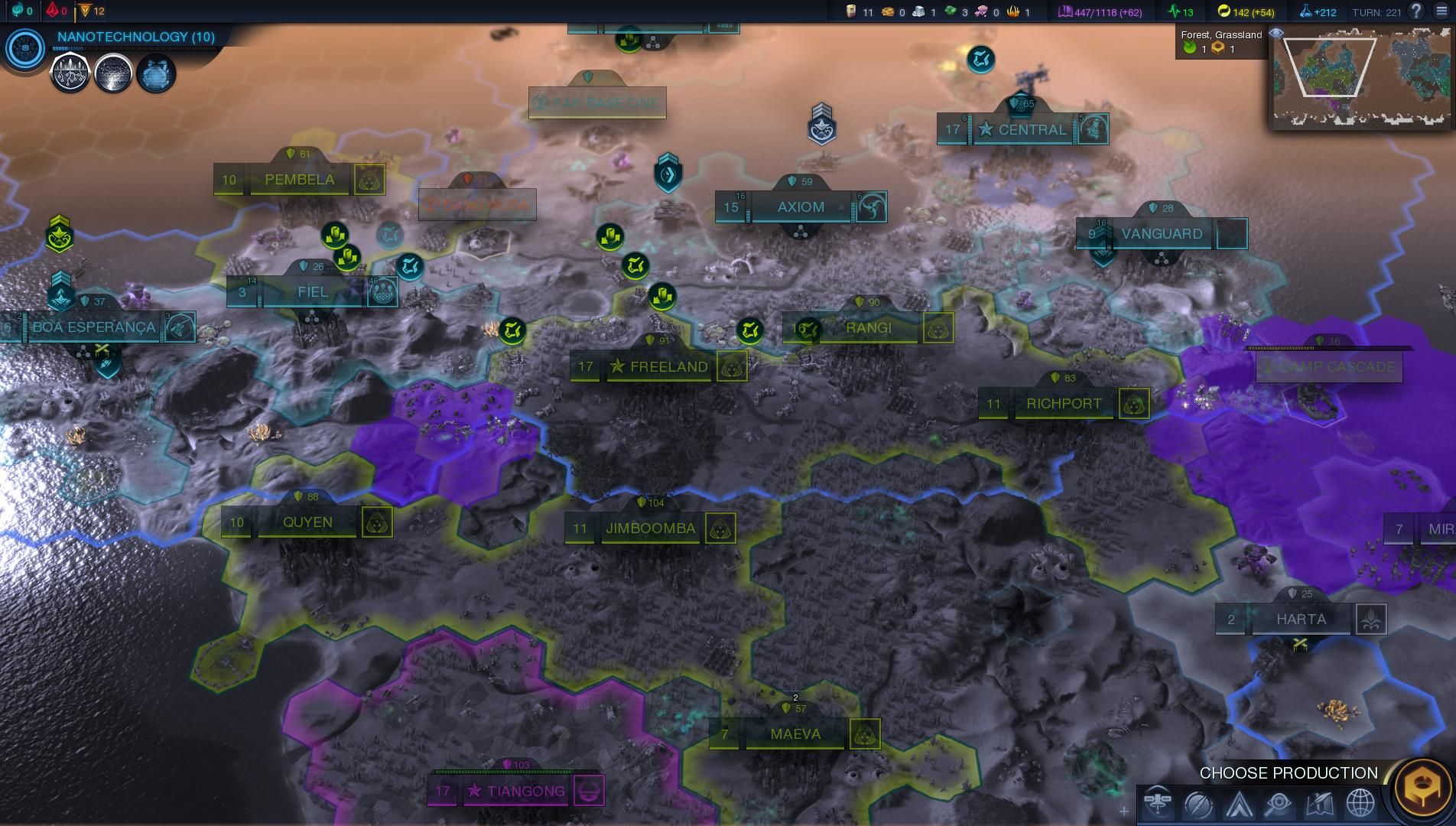 Those dispositions can change quickly, but open conflicts aren't too common. Beyond Earth has three distinct "affinities" that define a faction's culture. I seemed to gravitate towards the Supremacy group, who worked to combine alien and human influences to build a cyberpunk future of half-digital humans, whose late-game bonuses would turbo-charge my economy. Other leaders that share your culture are more likely to be friendly, but on lower and medium difficulties, war can still be hard to provoke.

I built a "mind flower" in one campaign, a gooey structure that if left unmolested, would end the game in 20 turns. I positioned it on an island, and panicked when a nearby opponent sent a fleet of boats toward it the turn after it was completed. The boats, a mixed group of destroyers and carriers, sailed close enough to the flower to get a good look at it, before promptly turning tail and sailing off. I won the game a few turns later. On harder difficulties, opponents gang up on those who've climbed to the top of the pole, conspiring to knock them off: I joined forces with my Polystralian neighbor during one match to smash a Franco-Iberian mind flower that was about to let the European collective win the game.

After 300 turns and multiple hours, I was hooked

The mind flower is just one of a number of ways to victory in Beyond Earth. All methods are a little underwhelming in payoff — they yield a static picture and two menu options, but after 300 turns and hours of careful political wrangling, military movement, and considered expansion, I had a vivid mental picture of my victorious civilization and, more importantly, my story. Once I'd delivered humanity from its limited understanding, turned us all into luminous beings, and started our transcendence beyond our frail, meaty frames, I could only keep going. I clicked the option next to "EXIT TO MENU."

Civilization: Beyond Earth launches October 24th on Windows. Linux and Mac versions are slated to launch later this year.

Read next: Surviving attacks from giant worms and evil Australians in 'Civilization: Beyond Earth'