What is the worst part of buying something at a sporting event? At AT&T Park in San Francisco, I think it’s paying $11 for a beer. But for Apple, here (and eventually in other places) it’s using your credit card to do it. You know, that small piece of plastic that you need to lug around in your pocket, and that has a bunch of sensitive information in plain sight.

The credit card is far from dead. But like with CDs and iTunes, Apple's trying to get rid of the pesky plastic part and take everything digital. And not just in online stores and in apps, but in the real world too. Its solution is Apple Pay, which lets you store those same cards on your iPhone, and soon on your wrist with the Apple Watch.

At AT&T Park, where the San Francisco Giants play, there’s been a scramble to get the new payment system up and running in time for The World Series so that people can leave their plastic cards at home. I did just that, or at least I tried to. 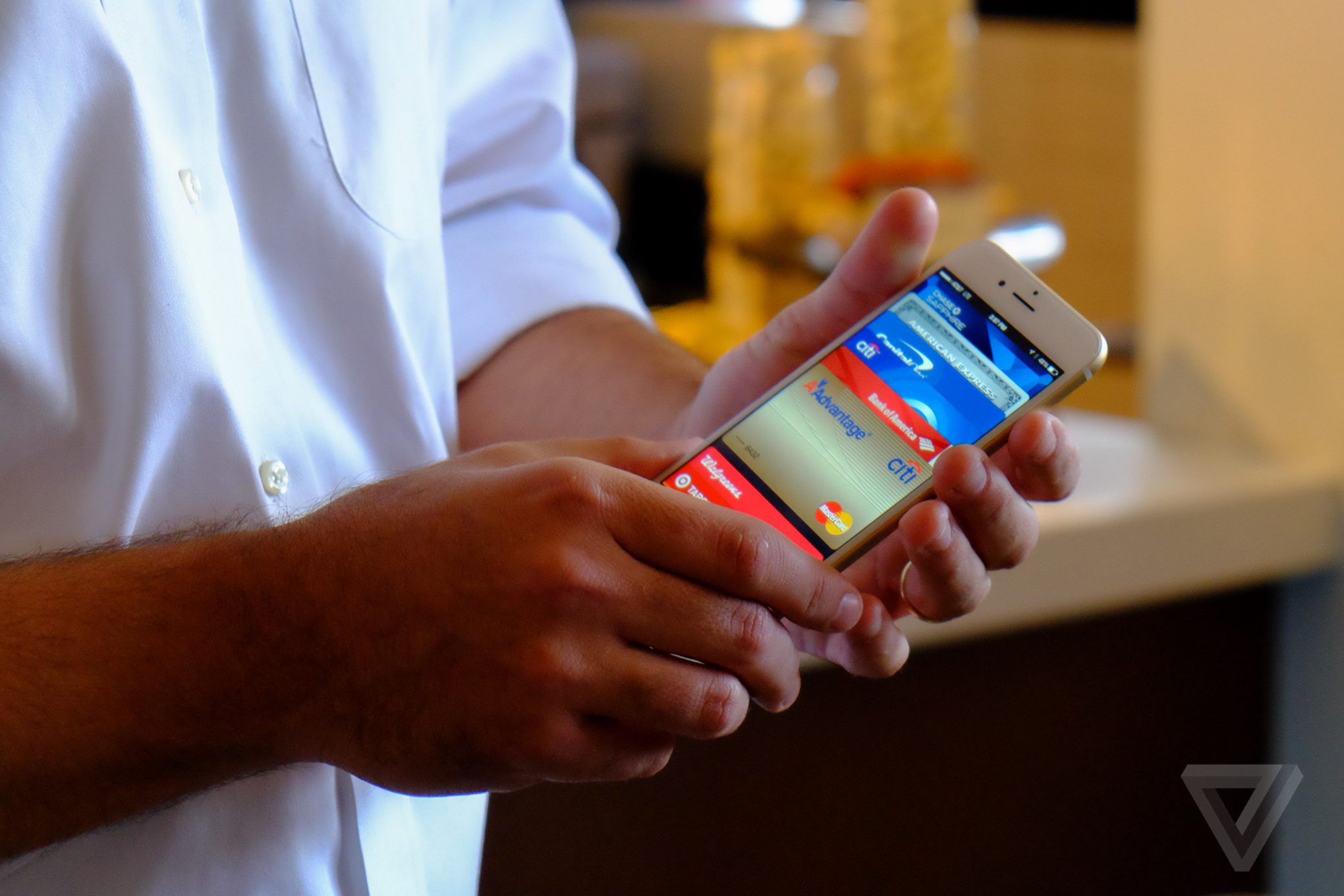 I went on to the game on Friday because Apple and MasterCard took a handful of journalists to show how Apple Pay works in a stadium that is completely packed with people who buy lots of things. Their own demo was buying garlic fries, though the broader vision is to let you buy nearly everything, everywhere. My own goal was to not only to see how well Apple Pay works (or doesn't) in a place these companies have designed as a showcase, but also one that let me compare that to using a plain old credit card for the same types of purchases.

As it turns out, Major League Baseball is doing something similar. It’s using these two top teams to demo the technology, so that other clubs will want to put it in their stadiums during the off season. The end goal is to make it easier for people to buy things at games. "This is why we do these things this time of year, so we can have these types of rollouts to get some experience so other clubs can take a look, and we’re confident that those clubs will be as into it as the Giants and the Royals are," says Adam Ritter, the SVP of Wireless for MLB Advanced Media.

Apple announced Apple Pay last month alongside the iPhone 6 and Apple Watch, but the league didn’t know which clubs would make it all the way here. "We had to start with the division series thinking about eight clubs," Ritter says. "Then we could narrow our focus." In a month’s time, the result is 114 terminals in the entire stadium that work with the technology. That’s about half as many as the 226 that were deployed in time for the first two games in Kansas City earlier this week, though Ritter says that the placement here has been strategic. You won’t be able to hold your phone up to the guy selling peanuts, but you will be able to use it when you’re buying food or memorabilia at some, but not all of the stadium’s vendors.

My Apple Pay shopping spree included spending $5.25 on a bottle of water, and another $5.25 on a hot dog. The items were purchased from different vendors in the stadium, with different cards that were in my Apple Pay wallet (both attached to my own personal credit cards, one of which is an embarrassing VISA card with Mickey Mouse on it). 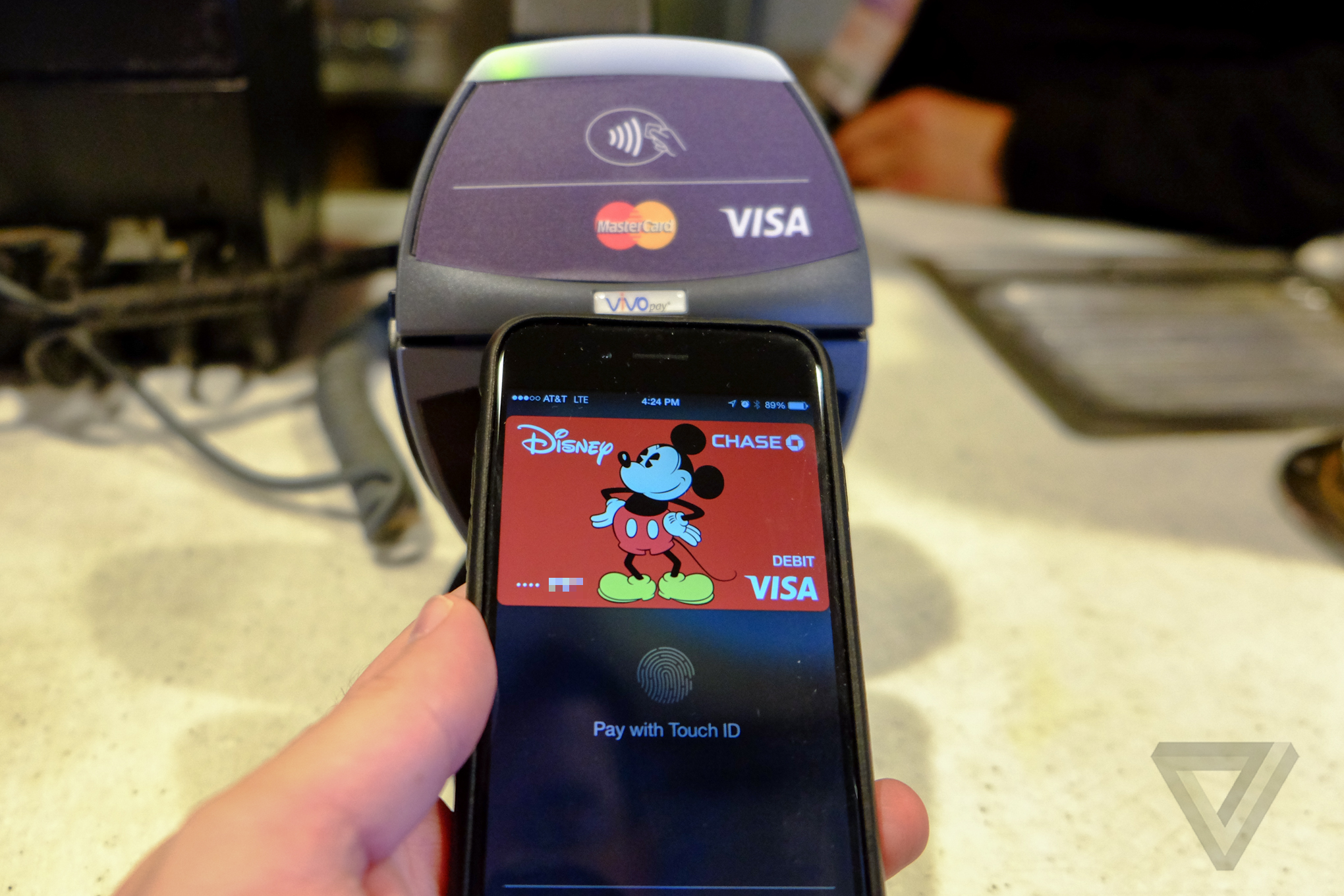 Just like using the technology in Apple's demos last month, and in stores earlier this week, Apple Pay took just a few seconds from the time I touched my phone to when the transaction was over. The entire experience was ultimately way less exciting (and memorable) than weaving through a packed crowd to put mustard on my hot dog. But that’s also the point of it. It’s supposed to be the shortest part of buying something. Each purchase was less than $25, so there was nothing to sign. In fact, the longest part of the whole experience was waiting for the Touch ID sensor to fully read my print, which took about two seconds.

The $11 beer and $7 Bavarian pretzel I bought later on with a normal credit card was another story. Along with having to break out my wallet for the credit card, I had to fish out my ID. It was perhaps a good example of how Apple Pay is not the perfect solution for everything. Even if I had used it here, the longest part of the transaction wasn’t the ordering and ringing it up, but waiting in line. And I would have still needed something besides my phone to get the job done.

There are lines, lines everywhere

Trimming down big lines are one of the things that makes Apple Pay and other mobile wallets so potentially useful. If you can cut down on the fussing at the checkout stand, you’re happy and so is the person behind you. That same experience cannot suddenly happen everywhere Apple Pay appears, including grocery stores, where the longest part is often tallying up everything in your cart. That’s true of other parts of going to a baseball game, especially this one, where waiting to buy food is just a small part of the experience. There are lines for everything. Lines to get in, lines while you wait for a play to end before you can go to your seat, and the bathroom line Apple Pay will never help out with.

Apple Pay also has many miles to go before you can get this kind of experience everywhere. So far its in 220,000 stores in the US, mainly in big chains like McDonalds, Subway, Walgreens, and Apple’s own retail locations. There's also a collection of big retailers like 7-Eleven and Best Buy that are working on a rival mobile payment service, and attempting to shut this one in the meantime. The system still has some oddities, too. For instance, you can’t easily tip people using Apple Pay. Apple’s expecting stores to manage that with typical paper receipts, or checkout software.

But for Friday night at least, it was time to forget all that. The stadium is Apple’s and Major League Baseball’s vision of how it wants people to live their lives. Everything, from getting to the ballpark, to getting inside, finding your seat, and ordering a hot dog can be done with your phone — and not your wallet. In fact, the only reason I needed my wallet was to get that beer. But there are still vestiges of the old way that are impossible to escape. Things like paper receipts, the need for an ID card, and those long lines which — even with Apple Pay — are inevitable.

And one problem Apple may never be able to solve? That $11 stadium beer.