A special screen on a proven phone — but is curved covetable?

I would very much like a flexible smartphone that I could scrunch up like paper and stuff into a pocket. I don’t quite know why I would like that, but it feels like something that the future should create.

Samsung’s wild Galaxy Note Edge is a tiny step toward that eventuality. The screen’s glass remains firm and immovable, of course, but it protects a flexible OLED display that curves around the side of the device. At first it looks like your phone has melted in some sort of Daliesque nightmare, but it’s like having two screens in one — the regular flat portion as found on any smartphone, and the crazy curved strip that shows anything from trending Twitter topics to a burger-flipping minigame.

Samsung reportedly considers the Galaxy Note Edge a “limited-edition concept” for now, due to its “technology-intensive” design. It’s not the first time the company has pushed out a high-tech product that feels like an experiment — witness last year’s concave Galaxy Round, or any of the six smartwatches the company has announced in the past 14 months. But Japan’s biggest carrier, NTT Docomo, released the phone last week anyway, and I’ve spent a good deal of time trying to work out the benefits of its bent screen.

So, here I am, with a Galaxy Note Edge stuffed into my pocket. I don’t quite know why it exists, but it feels like something the Samsung of today would create. 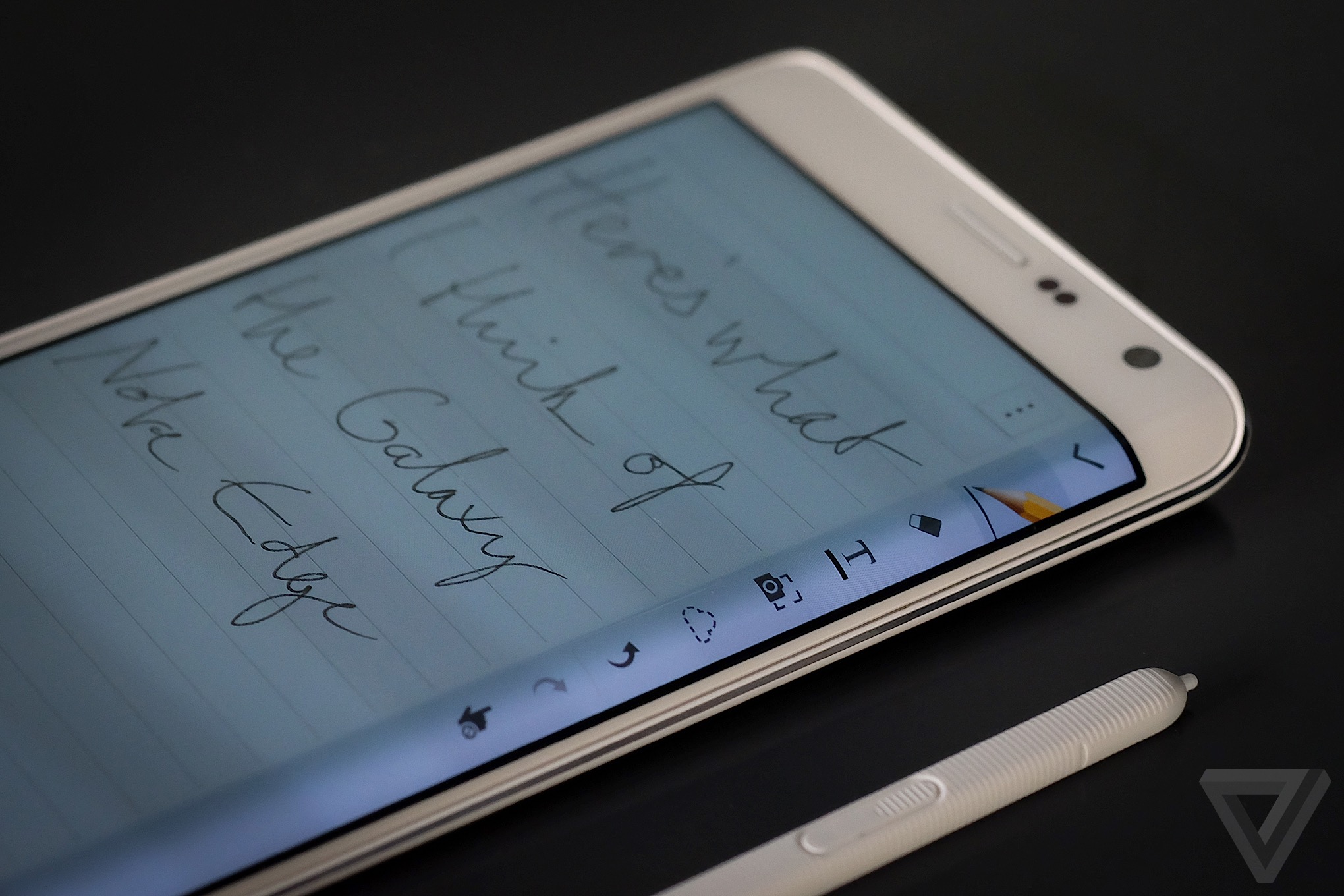 In almost every way, the Galaxy Note Edge is a Galaxy Note 4: mostly the same specs, mostly the same software, mostly the same design. But there’s one obvious difference — its curved OLED screen is an absolute knockout, even more so than the Note 4’s. It’d be hard to make the argument that this isn’t the best smartphone display to date, with amazing, vibrant colors and crazy pixel density. It’s also the most impressive element of the Note Edge’s design; the iPhone 6’s glass curves a little at the sides, sure, but the Note Edge takes the infinity-pool effect to the next level. Look at the phone from the left and the screen seems to go on forever.

The Galaxy Note Edge's screen seems to go on forever

The curvature of the Note Edge’s display feels a little odd at first, but the unfamiliar thumb movement soon becomes second nature. You can put the Note Edge on a table without it rocking, you can hold it in your hand without accidentally triggering the touchscreen, and you can slip it into a pocket without difficulty. The display is actually higher resolution than the Note 4’s; while it’s slightly smaller, the curved section adds an extra 160 vertical pixels, making for a 16:10 image at 2560 x 1600. This means there’s no compromise when using the Note Edge — even if you ignore the curved display area, you still have the same usable screen space as a Note 4.

Ignoring the curved display area is something you’ll soon get used to. While it does look impossibly cool at first, the concept doesn’t change the basic smartphone experience all that much. Here’s how it works: on the home screen, the curved area is taken up by one of a series of widgets that you can flip and swipe through. When you’re in an app, this column is shrunk down to a tiny strip with a customizable message written in a tacky font, and you can swipe in from the right to bring up the full-width widget over the edge of the app you’re using. 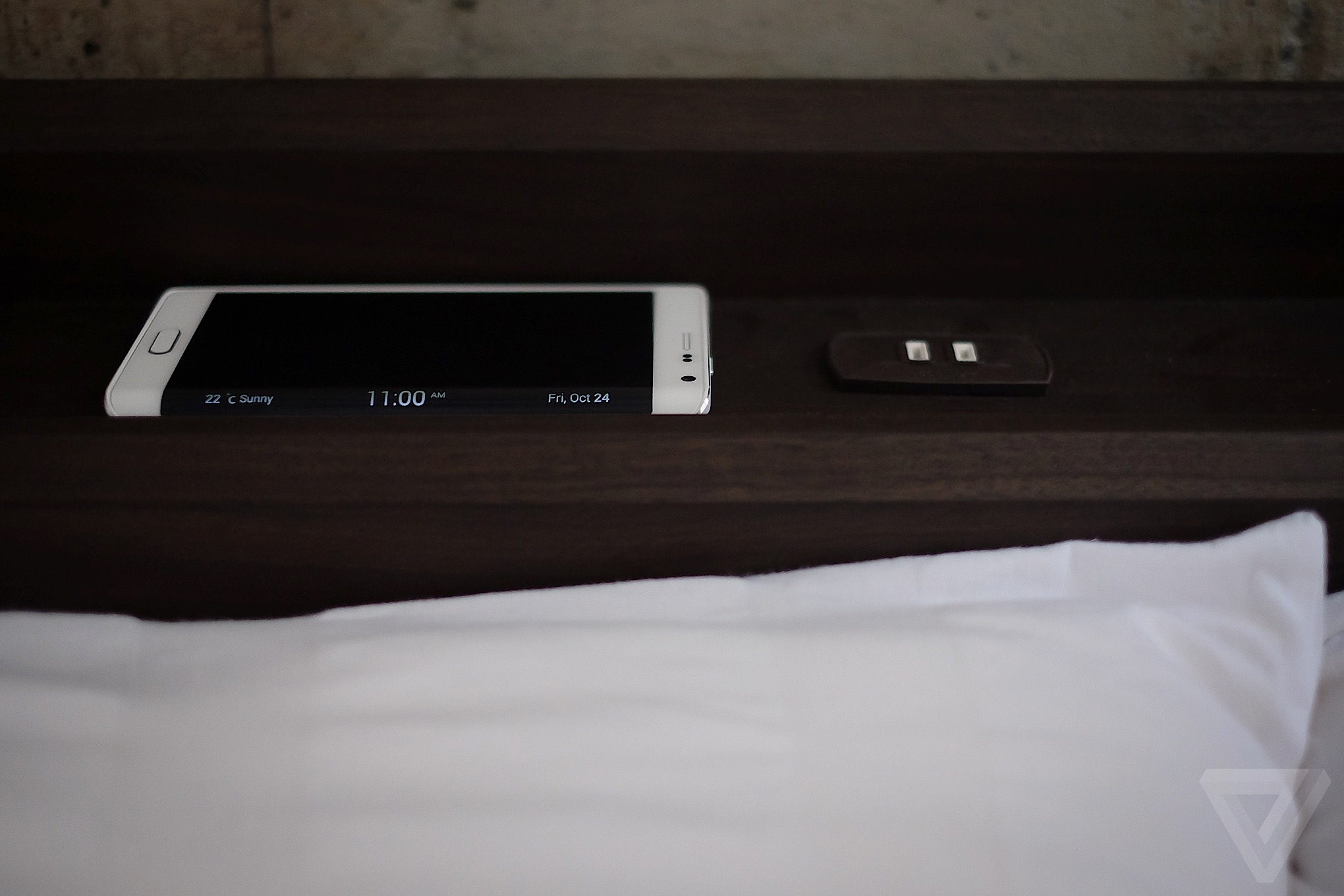 The widgets can contain a few things. The most obvious is a list of app shortcuts, letting you jump between apps with a swipe and a tap. The next default tells you the weather and displays the icons for any apps that may have unread notifications. The other two widgets that I’ve found myself leaving on are a location-based list of trending Twitter topics — cool, because it’s not something I’d usually check myself — and one linked to S Health, which reads out step and distance data from the pedometer. These are all simple tweaks that sometimes come in handy without blowing the mind. 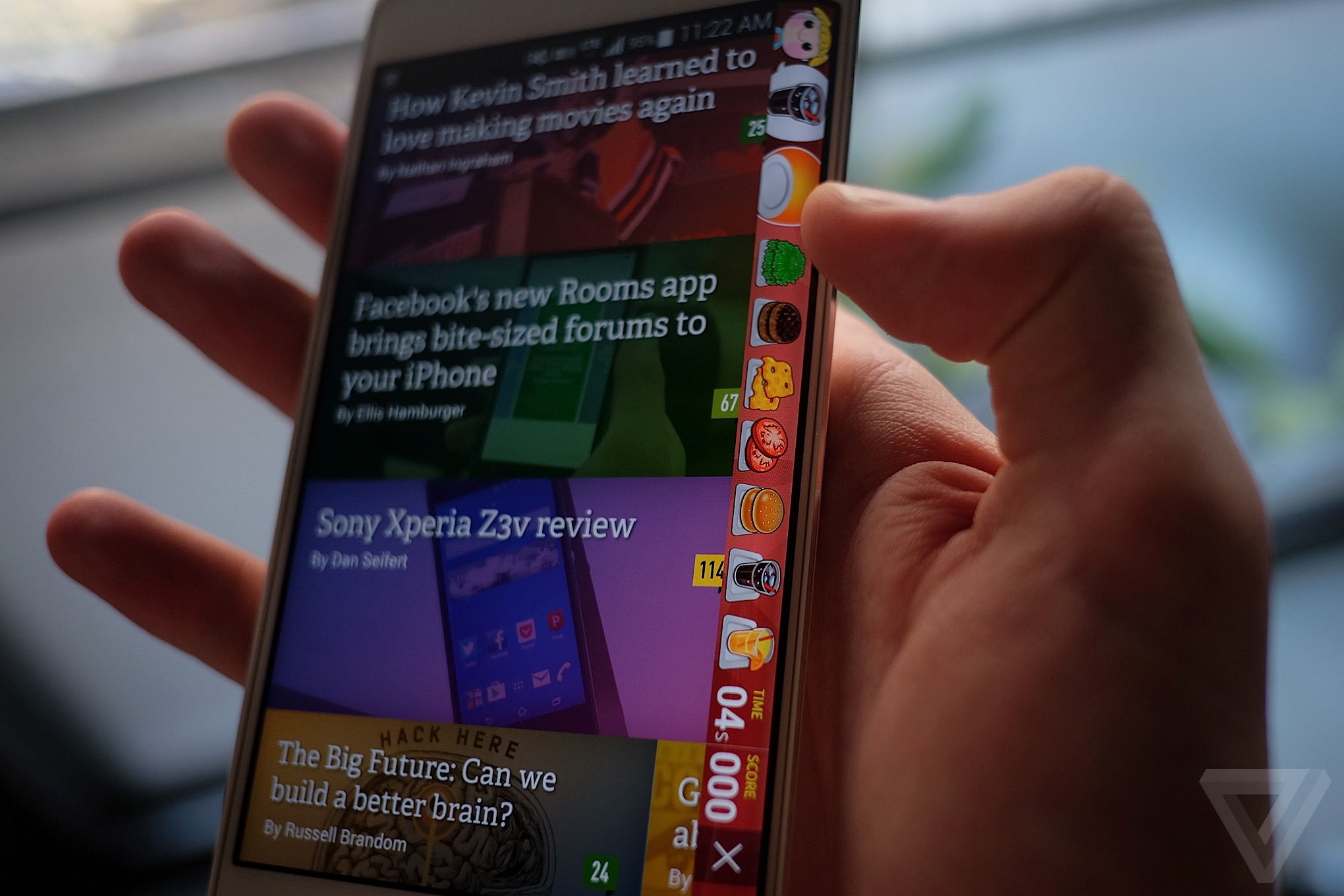 Other uses for the curved screen columns include a speed dialer, which might be a good feature for someone who makes more phone calls than me; a news ticker, which I didn’t use much because it works exclusively with a Japanese service called The News Cafe; and a disturbingly detailed weather ticker that I switched off because its ominous predictions of "discomfort" and "dry skin" were a little upsetting. Audio apps make use of the extra space by bringing up a column with play, skip, and pause controls whenever something is playing in the background.

There is an app store for the Edge screen, but at the time of writing it was populated with a grand total of two widgets. One is a Samsung-made game called Tiny Burger, where you have to stack your burger to the customers’ orders as quickly as possible; I can only assume the idea is that you secretly play it next to a spreadsheet when your boss is sitting to your left. The other downloadable widget is, hilariously, a single vertical bar that displays RAM usage and nothing else. If, after buying a phone with 3GB of RAM, you find yourself stricken with worry over how much of that remains free on a minute-to-minute basis, the Note Edge may well be for you. 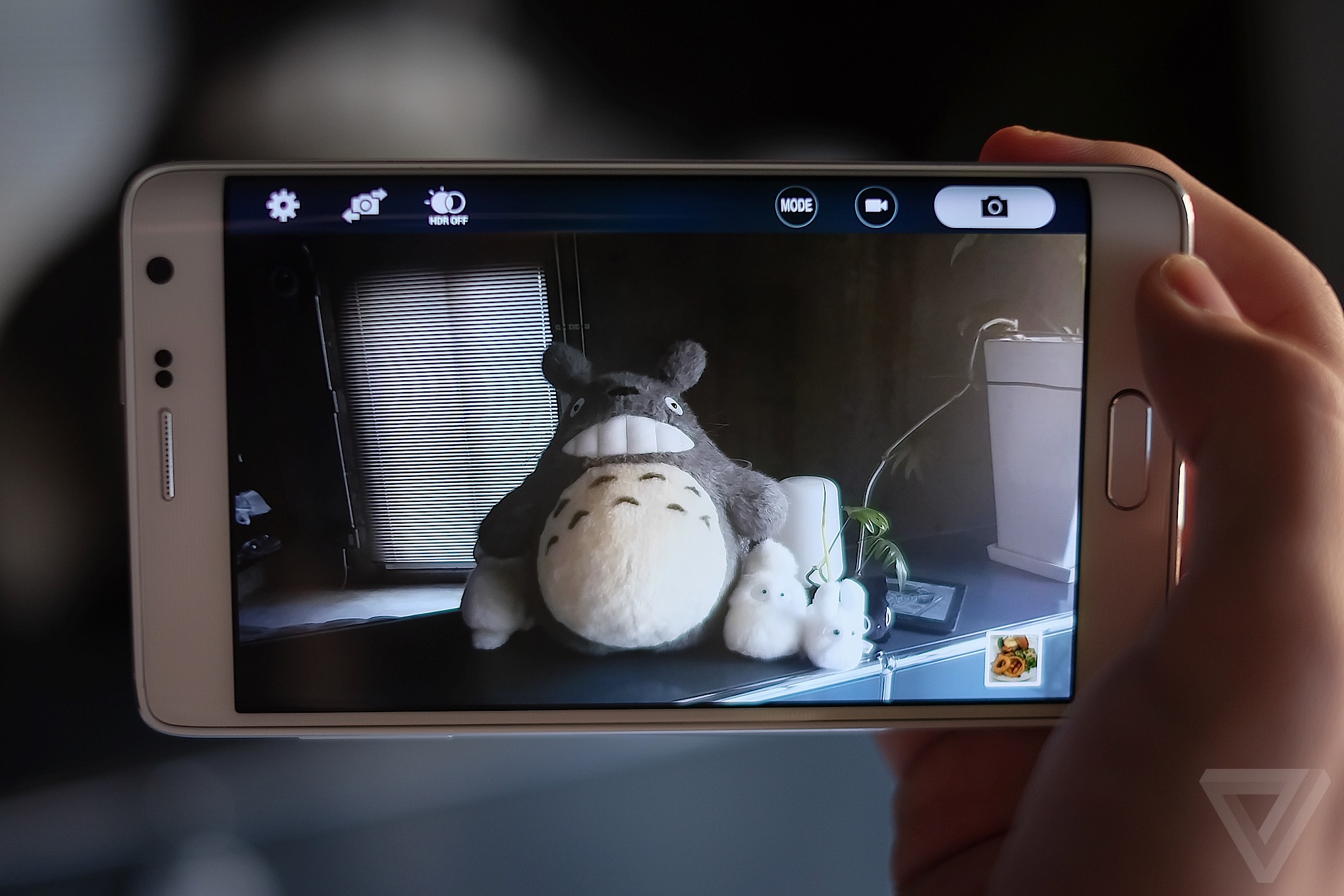 Samsung has also updated a couple of its own apps to work with the Note Edge’s screen. The camera app moves most of its controls to the curved edge, leaving an uncluttered viewfinder image. And S Note, the note-taking app designed for the stylus, does much the same: the various tools and features are shifted to the side, giving you more space on the virtual page. These are both good ideas that work well most of the time, but they haven’t been fully thought out — I missed a few good photo opportunities when notifications came in and overlapped the shutter button. In fact, displaying notifications on the curved screen is an all-around bad idea; you have to read them sideways if you’re holding the phone in portrait mode, and you’re still left with the typical Android clutter at the top of the screen afterward.

If you swipe down from the top of one of the Note Edge’s columns, you’ll get a list of quick-access tools as with Control Center for iOS. These include a flashlight, a stopwatch, a timer, a voice recorder, and — brilliantly — a ruler. Some of these can be pretty useful; I used the timer when cooking and, while on iOS I’d have to keep jumping in and out of the full-screen Clock app, on the Note Edge I could catch up on my Pocket queue while checking in on the time with a simple swipe from the side. And, in another reasonably sensible example of simple functionality, you can use the curved edge as a nighttime clock with the rest of the screen switched off. 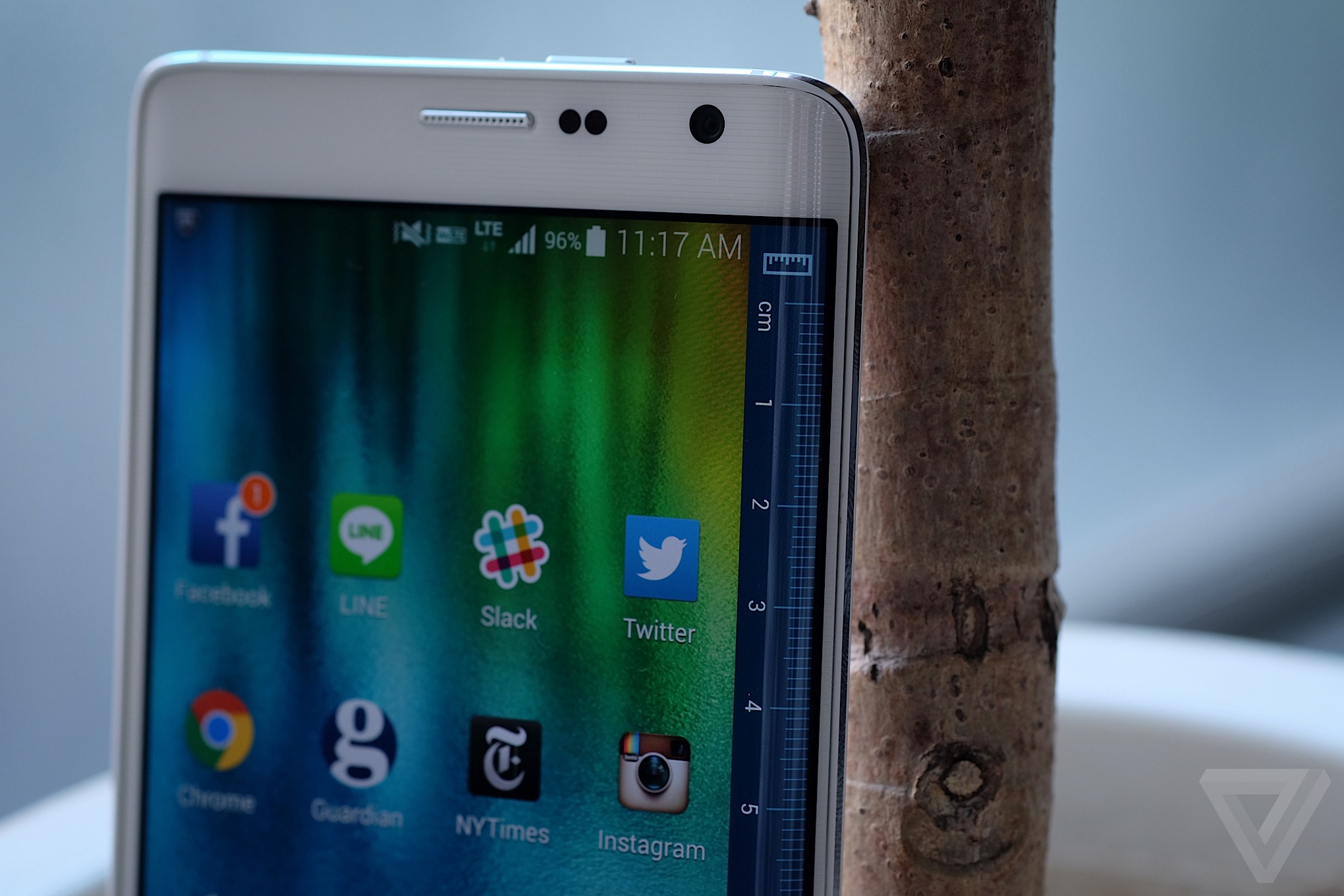 But beside all of this, the most important thing to know about the Galaxy Note Edge is that while it does feel like a crazy, experimental device, it’s also just a really solid smartphone. It’s based on the Galaxy Note 4, the latest in Samsung’s pioneering line of gigantic phones, and also the company’s best smartphone to date. There are a couple of differences: the Note Edge’s screen is a tenth of an inch smaller at 5.6 inches diagonal, and the battery is a little less capacious at 3000mAh. Although the Note Edge always made it through a full day, I wasn’t as impressed with its endurance as David was with the Note 4’s; this appears to have been an issue with some international versions of the Note 4, too, so mileage may vary worldwide.

Most importantly, the Galaxy Note Edge is just a really solid smartphone

Otherwise, everything is pretty much the same. You get Samsung’s latest software, which this year is a slightly more restrained blend of useful features and frustrating gimmicks. You get a 16-megapixel camera, which doesn’t quite match up to the iPhone 6’s but still performs better than just about any other Android smartphone I’ve seen. You have the trademark S Pen stylus and attendant software, a unique Samsung feature that I actually really like.

And you also get Samsung’s new part-metal design direction, which I’m not as enamored with as some of my coworkers. It’s certainly an improvement on prior efforts from the company; the metal frame makes the phone feel far more solid and look a lot less tacky than the fake plastic chrome trim of old. But the rear of the phone is still thin plastic, this time etched with a cheesy pattern that Samsung’s designers would have you believe emulates the finest leather from Togo. The absurdity of that statement aside, I suppose I should just be grateful that there aren’t any imitation plastic stitches this year. 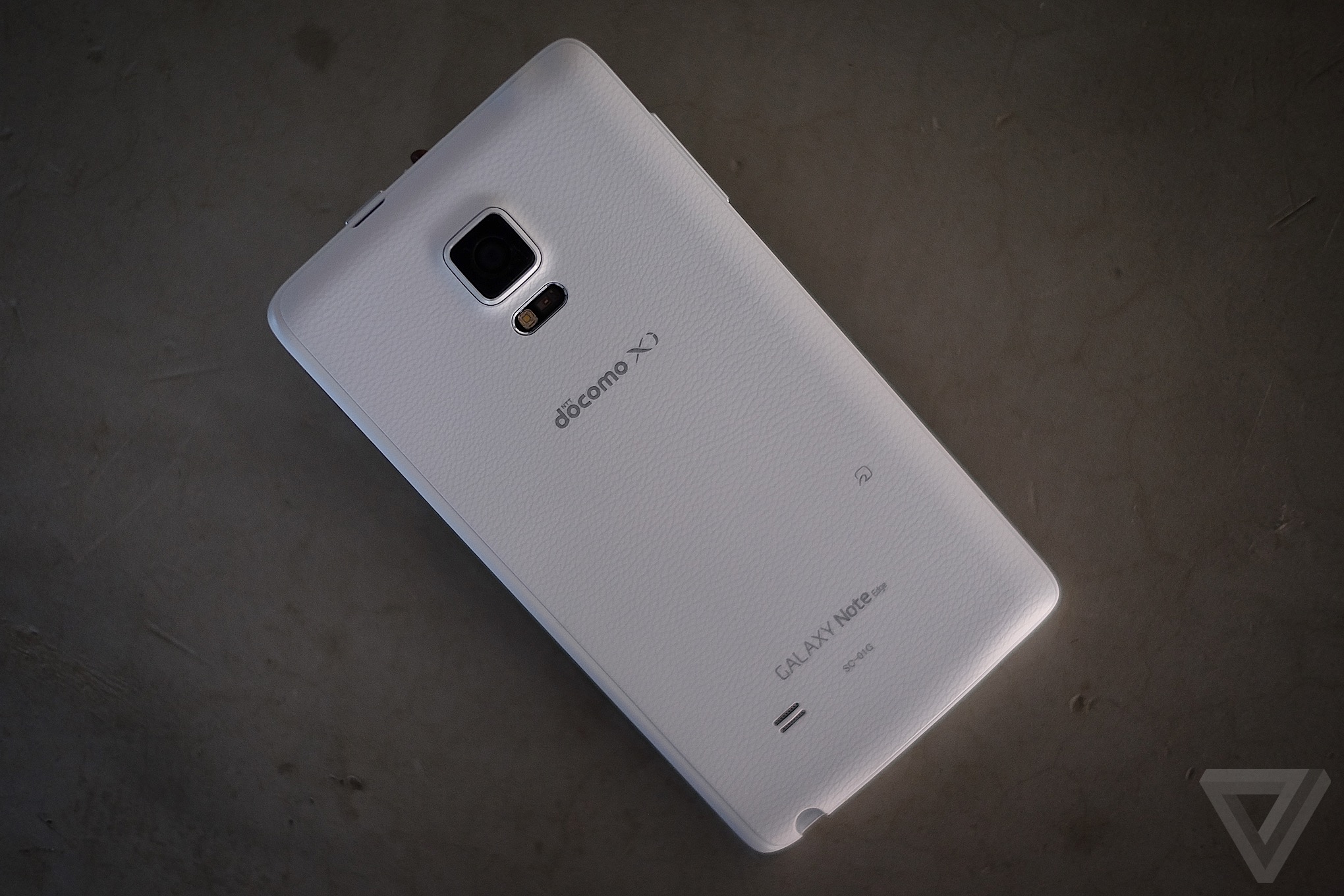 None of the phone’s exclusive features alone, or even in combination, are likely to be a selling point for most people. The Galaxy Note Edge is yet another example of Samsung iterating in public, releasing a product because it can flex its supply-chain muscle before deciding whether it should. And you know what? In this particular case, I’m okay with that.

The Galaxy Note Edge is a great phone because the Galaxy Note 4 is a great phone, and the head-turning gimmickry of the curved screen does very little to compromise that fact. Make no mistake — I don’t think phones with slightly bent displays are the future. If you buy the Note Edge now and ride out the two-year contract, at the end of 2016 you’ll probably still be the only person you know with a phone like this.

But there’s no reason to think that any other 2014 Android phone would leave you better off. The most pessimistic assessment possible of the Note Edge is that it’s a slightly cooler-looking version of the best Samsung phone yet. Assuming no major difference in price — which may be a bad assumption — I’d pick this over the Note 4 just because it’s more fun and interesting to use. I can see why others may prefer to stick with the known quantity of the Note 4, though.

So no, Samsung hasn’t proven the curved-screen concept to be anything close to essential yet. But if we’re ever going to get to a future beyond near-identical flat slabs of glass, we’ll need products like the Note Edge along the way. After all, it wouldn’t do for us all to be the same.