From the opening scenes of sprawling cornfields accompanied by a revelrie-like brass note, it’s clear that Interstellar is working in the tradition of 2001: A Space Odyssey. It has the grand scope of Kubrick’s classic, promising to take us from humanity’s past to its distant future, and proceeds with the same stately pace that encourages you to ponder the themes it offers along the way. It throws out plenty to think about — the nature of time and space, the place of humanity in the universe — but somewhat unexpectedly for this type of film, and for Christopher Nolan, whose work tends toward the cerebral, it explores these ideas in human terms. Interstellar is as interested in how general relativity would affect your family life, for example, as it is in the theory itself.

Before you proceed: this review has a few spoilers, but nothing beyond what you’d glean from the preview and the first ten minutes or so of film. Turn back now if you care about that sort of thing.

Directed by Christopher Nolan (Memento, Inception, the most recent Batman trilogy) and written with his brother and frequent collaborator Jonathan, Interstellar takes place in a near future that harkens back to the recent past — like the 1950s Midwest or maybe the Dust Bowl, but with laptops and drones. There’s very little exposition; through telling details and offhand comments, you get the sense that there’s been an environmental disaster followed by a famine, and that humanity has scaled back its ambitions to bare subsistence. People farm corn — the one crop left unravaged by blight — watch baseball games in half-empty stands, and flee towering haboob dust storms announced by air raid sirens.

Matthew McConaughey plays Cooper, a NASA pilot who has turned to farming — like everyone else at the time, an odd cut to faux-documentary footage informs us. He lives in a ramshackle house, complaining to his father (John Lithgow) about humanity’s diminished horizons and doting on his daughter Murph, played by Mackenzie Foy with a believably teenage mix of mischief and exasperation.

McConaughey eventually leaves Foy and Earth behind to scout out a new home for for the human race, but it’s their relationship that grounds the movie. As action-filled as Nolan’s films are, they can sometimes feel abstract, like symbolic sublimations of some offscreen mental trauma. So many of his characters get their motivation from some prior loss — the dead wives from Memento and Inception, the dead parents of Batman — that they then work through according to the game-like rules Nolan excels at, whether those rules are imposed by amnesia, consciousness, or a supervillain. But Foy is an actual character, not a cipher, and the relationship between her and McConaughey gives the film an emotional heft that Nolan’s other work sometimes lacks.

Interstellar features some of the most beautiful images of space I’ve seen on film. Space feels vast, with the spinning white vessel often relegated to a corner of the screen or lost against the rings of Saturn. The depiction of a wormhole accomplishes the seemingly impossible and makes, well, nothingness look dazzling, as light slides and warps around it like water off a bubble of oil. The black hole is even more amazing. Present throughout the movie, it’s in these lingering shots of a tiny spacecraft floating through the galaxy that the influence of Kubrick’s Space Odyssey is most clearly felt.

Not that it’s all languorous drifting through the galaxy. Nolan has a genius for landscape-scale action sequences, and the planets, with their alien weather and gravity, give him ample opportunity to stage them. The camera races and plunges and, especially in IMAX, creates classic theme-park pit-of-your-stomach thrills. There are gigantic waves, frozen clouds, and other dangers that feel threatening despite looking totally surreal.

The biggest danger the shuttle crew faces, however, is time. Time isn't just running out — it's compressing and stretching as they travel through space. The Nolans use relativity to create some original and urgent crises as the shuttle crew figures out how to best spend their shifting time. Time is a resource, like food or water, Hathaway warns. The time differential between the crew and those they left behind also gives rise to the movie’s most melancholy scenes. In this respect it feels less like Space Odyssey and more like Homer’s Odyssey, with McConaughey getting detained and delayed as time passes and things go wrong back home.

As in 2001, things get trippy toward the end. Without revealing too much, I can say that after a series of mostly comprehensible events, it swerves into either deeply theoretical physics or sentimental spirituality. Possibly both. The shift is jarring, but also visually interesting enough that I mostly went with it. 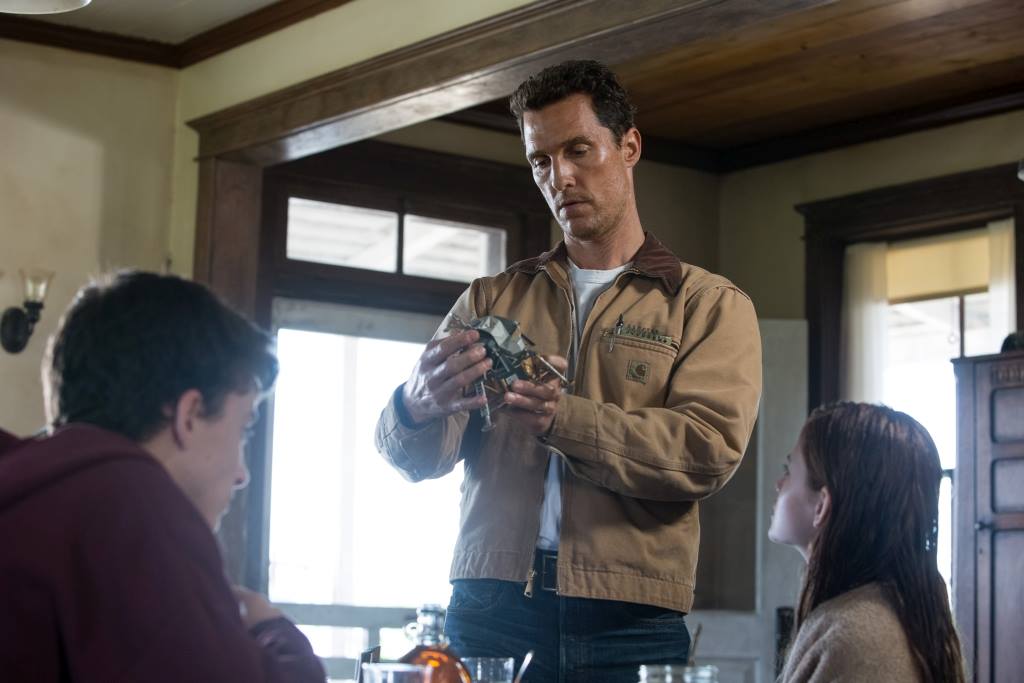 'Interstellar' is most powerful when it’s at its least abstract

There’s always the question with Nolan of what it all means. His movies tempt you to demand a thesis, partly because his characters always seem to be grasping for one. They talk almost aphoristically about the human condition, ghosts, time, evil, love, and other heavy but abstract things, and they quote Dylan Thomas a few too many times. Fortunately, McConaughey brings some wry levity to the role, as does the robot TARS, a toppling metal block with adjustable honesty and humor settings, voiced by Bill Irwin. Ultimately I took the grander bits of dialogue as thematic signposts, telling you to keep your head at the level of death and humanity and time but not meaning much in themselves.

Which is fine. The movie is most powerful when it’s at its least abstract — when it’s working through the messy decisions and sacrifices that actual interstellar travel would entail, finding dramatic potential in the laws of physics. Interstellar is sometimes confusing, melodramatic, and self-serious, but Nolan managed to make a space epic on a human scale.