You can order Taco Bell from a smartphone starting today

You can order Taco Bell from a smartphone starting today

Get ready to order FourthMeal with your smartphone. Taco Bell will today announce a new app that lets customers nationwide order food ahead of time and pick up their meal via drive-thru or by walking into the fast food chain. After several months of planning, the company has become the first big fast food player to offer mobile ordering at this scale and with two pickup options. Other huge chains including McDonald's have conducted pilot tests for smartphone orders and are likely to follow suit before long. Taco Bell is emphasizing that mobile customers will have access to every single ingredient on its menu, and the company even plans to offer some food items exclusively via the app. Special offers will also be integrated, and Taco Bell says reordering your last custom creation is as easy as rotating your phone.

"You'll be able to order products that no one else can," Tressie Lieberman, senior director of digital marketing and platforms at Taco Bell, told USA Today. The fast food chain plans to launch a loyalty program early next year for its frequent customers; that too will be tied to the new app. If you've already got Taco Bell's app installed on your Android or iOS device, expect to see an update that adds mobile ordering very soon.

Taco Bell hyped up today's big reveal with a rather unique and unprecedented strategy: the company temporarily blacked out its website and social media accounts on Twitter, Facebook, and Instagram. All of those accounts are now promoting Taco Bell's new app. While it initially seemed like Taco Bell had completely wiped out its Twitter history, the fast food chain's popular account was actually hiding at @totallynothere during the blackout — with its follower count (1.41 million) and nearly 40,000 tweets intact.

And the promotion extended beyond that. Taco Bell sent out press invitations for today's announcement that resembled something you'd expect from a major tech company. The invites didn't leave much to the imagination regarding the big news, but seeing something like this from a fast food company is still pretty novel. Taco Bell knows how to get its message out in a way that other fast food giants don't seem to understand. 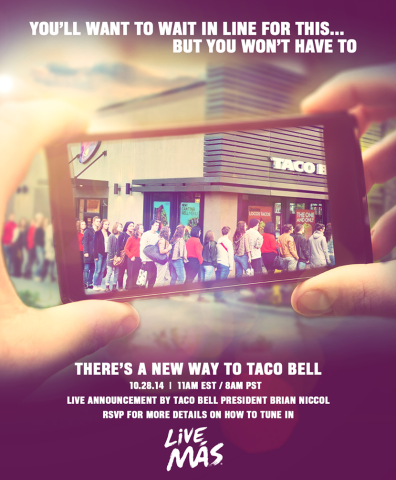