Flipboard debuts a big redesign and The Daily Edition, a morning news section

Flipboard debuts a big redesign and The Daily Edition, a morning news section

With a fresh coat of paint and a handful of new features, Flipboard targets competitors big and small

Finding the right news to read is hard. That’s why hundreds of companies have jumped into the game offering different takes on what you might want to read, and why you might want to read it. Some apps offer expert-level curation, like Yahoo News Digest, which bundles ten stories into a simple package that comes every morning and evening. Other services like Circa hope to actually rewrite the news into tiny, bite-sized pieces. Then, there's Flipboard, the comparatively ancient older brother that does a great job aggregating news your friends post across all of your social networks.

The app boasts 250,000 downloads per day, consistently tops App Store charts, comes pre-installed on a variety of Samsung and Microsoft Surface devices, and has deals in places with a large group of publishers to repackage and even monetize their content. (Disclosure: The Verge has such a deal in place with Flipboard.) Flipboard is pretty far along in its quest to redefine news aggregation, but do you have many friends who use Flipboard every day? The app has over 100 million users, but seems to have lost some of its buzz as people increasingly turn to Facebook for aggregated news.

Flipboard 3.0, which launches today on iOS and Android, hopes to turn the tables on its smaller competitors, like Yahoo News Digest and SmartNews, as well as its larger ones. The app now lets you pick from 34,000 topics to help narrow down what specific topics matters most to you, and presents curated, topical stories in a "Personal Magazine" that pops up when you open the app. This Personal Magazine includes stories shared by friends, but also the top stories from niche topics you've followed like "Fujifilm photography" — something Facebook can't do. On the flipside, the new app also includes Flipboard’s first-ever editorially curated news section called The Daily Edition, which gets pushed to you every morning at 7 AM. The Daily Edition is a quick list of general news stories across a variety of topics like Sports and Business, and is curated by an in-house team led by Josh Quittner, Time’s former director of digital editorial development.

"The Daily Edition is a really important use case that we weren’t serving well enough."

In total, Flipboard is now broader but also more personal than ever. It’s a risky move for Flipboard — which has made its name culling all of your social feeds into one tight package of photos, links, and videos — but it could potentially turn Flipboard into the one news app you use, which is the real holy grail. The new app’s Daily Edition competes head-on with SmartNews and Yahoo News Digest, while the app’s Personal Magazine aims to refine Flipboard’s existing formula to better compete with Facebook. Yesterday, Flipboard asked you to tap on tiles like "Tech" and "Rolling Stone," to get news. Today, Personal Magazine bundles it all into one feed, which also includes algorithmically chosen stories based on the topics you’ve picked.

"We do see different uses cases on Flipboard: people who want to get caught up in the morning, and some who are serendipity-oriented," says Flipboard co-founder Mike McCue. "The Daily Edition is a really important use case that we weren’t serving well enough, and that will also lead to people being reminded to go and use Flipboard, which isn’t just for fun and discovery." McCue outlines a problem facing many apps — that most users just don’t have much space on their home screens, and only choose to interact with a dozen apps or fewer per day. Push notifications for morning news in apps like Yahoo News Digest, or for timely content (Magic Recs) in apps like Twitter, have outstanding engagement numbers. 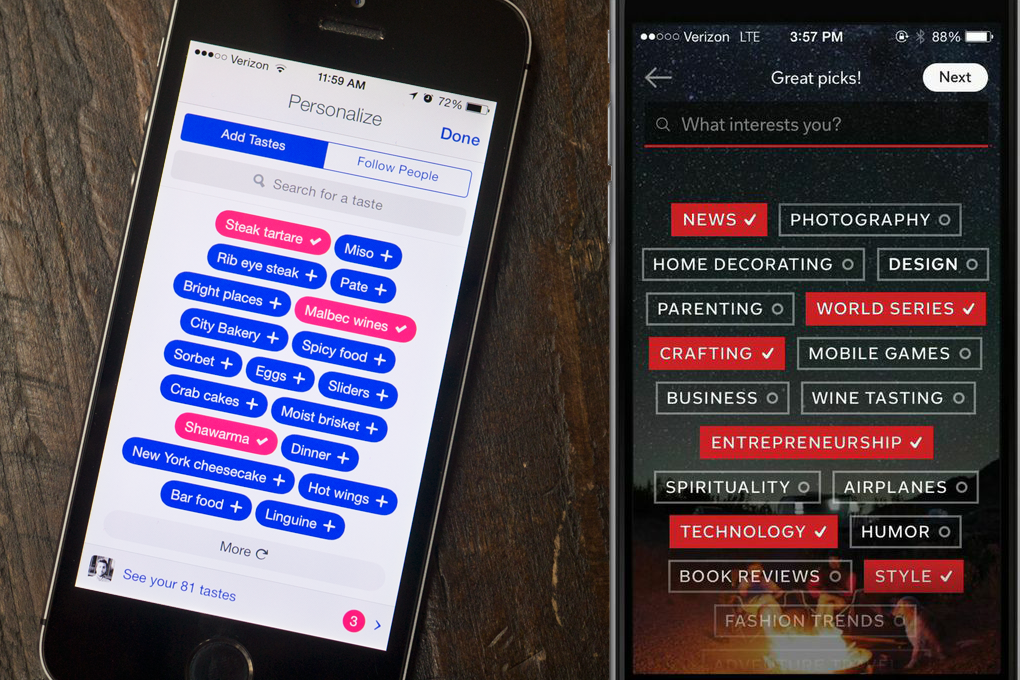 Flipboard 3.0 also introduces a fresh new design that emphasizes high contrast headlines and slick typography. The app also targets phones, specifically, where the company says 70 percent of its users reside. The iPad represents more of a lean-back experience built for browsing and discovery, McCue says, but the phone is a place for delivering important news as quickly as possible. This intuition formed some of the impetus for the app’s new keyword-based topic picker, which lets you choose specific topics (and even specific Flipboard users) that interest you the most. The app’s new focus seems heavily influenced by what we saw from the new Foursquare this summer — a company bursting at the seams with data and looking for new ways to cut through it.

Thus, Flipboard's new topics help you narrow down what you like, but also help surface content from the thousands of Flipboard "Magazines" people have made. "There are some people that are very loyal to specific publications and that is always going to continue to be the case," says McCue, "but the new generation of readers today are more topic-focused. Just tell me about the Xbox, I don't really care where it comes from." McCue says that the company’s acquisition of news app Zite back in March helped provide a good foundation for the app’s new algorithmic curation. Unfortunately, the new topics engine is only available in the US and Canada for now, Flipboard says.

Flipboard 3.0’s unique combination of algorithmic curation, daily news, and social media aggregation could be tough to beat — if it doesn’t prove too cluttered or unfocused for new users. On its third quarter earnings call yesterday, Facebook CEO Mark Zuckerberg said that smartphone users are shifting towards picking apps that do one thing well. So the question is, do we want just one app for all of our news?