Is there a more loved, yet deeply hated part of the iPhone than the speaker? On one hand, it lets you take your calls without holding the phone up to your face. You can also use it while watching videos or listening to music without headphones, and — of course — hear calls coming in from afar. On the other hand, it’s pretty terrible for listening to music, if you’ve ever tried to use it for music at a barbecue or, god forbid, on public transit.

Inventors Alex Selig and Varun Srinivasan have come up with a specialty iPhone case that they believe solves both these problems. It’s called the Amp and it’s one part speaker, and one part microphone. It listens to ambient noise and adjusts what you’re playing to compensate. It’s not really noise cancellation; think of it more like adaptive EQ.

Selig and Srinivasan, who met while working at Microsoft, call the feature dynamic noise reduction. It analyzes music and noise, and tunes elements of the music accordingly. It’s constantly listening to what’s around you using the microphone array built into the Amp case, and it compensates for what it hears during the last 10 seconds, making changes within 5 seconds of noticing a difference in ambient noise. How does this work in real life? Say you’re walking along the city street and bunch of cars and buses start driving by. The sound will get adjusted in a way that’s not louder, just more discernible, Srinivasan says.

This also works with any set of headphones — noise canceling, or not. An earlier version of this idea shipped inside an iOS app the pair released last July called SoundFocus, which is now the name of the company. From that, they were able to train the technology with thousands of songs, Srinivasan says. The only problem is that they were limited by software for where their sound algorithms could run. It was fine in places like Spotify or Apple's music app, but not Netflix. The answer was hijacking the audio, which is what this case does. 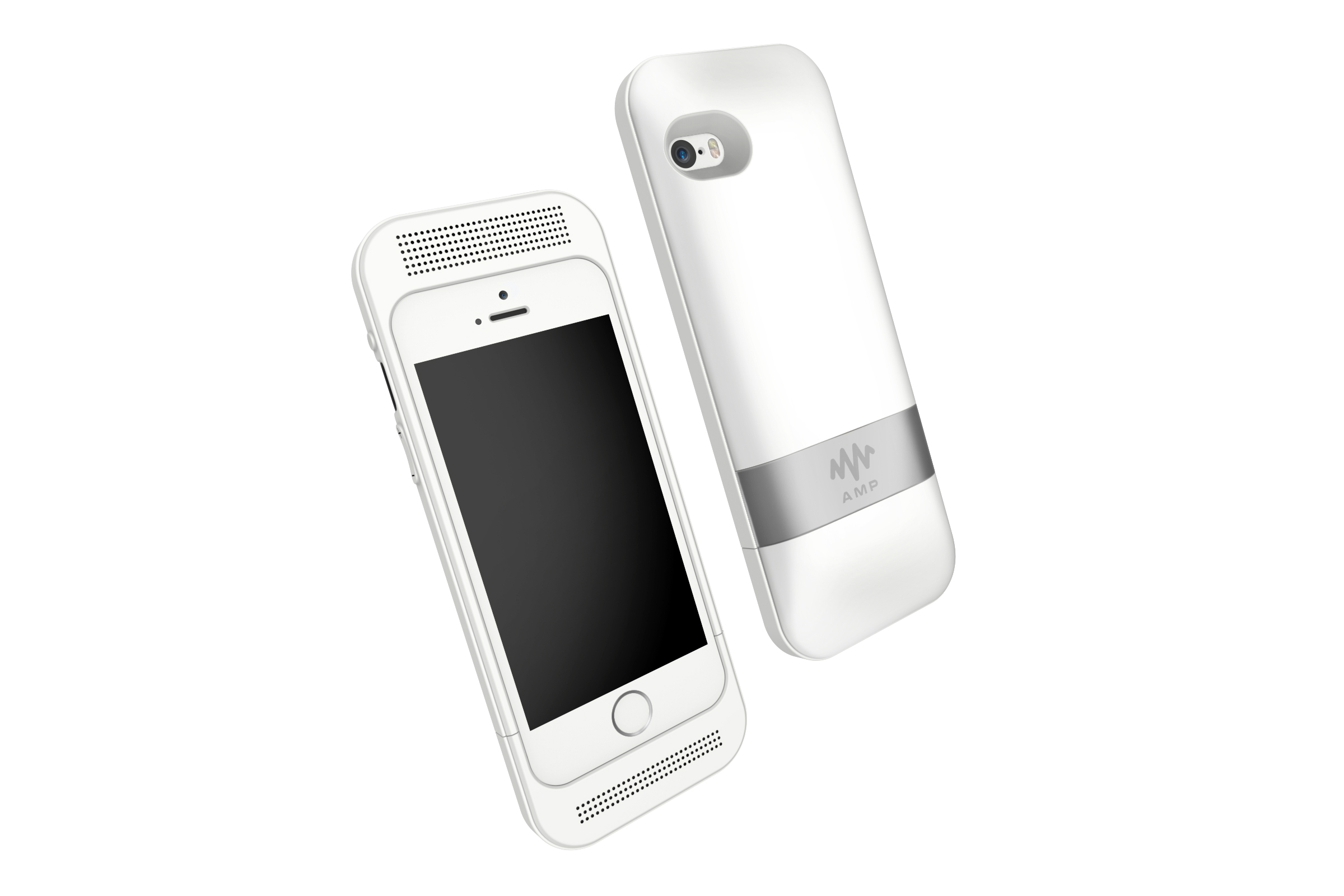 For times when you’re not out using headphones, the Amp does just what the name suggests. It can go twice as loud as the built-in speaker found on the iPhone, and with what the company describes as better sound reproduction at both the high and low end of the spectrum. The speakers are also designed to fan out in a cone shape, so that if you’re using a single phone for a conference call, people sitting across the table will hear the sound the exact same way.

In a brief demo of the case, both as a microphone and as a portable speaker, I found the sound to be less appealing than the sound coming out of an iPhone 5. I listened to the same song with the same set of headphones on two different devices, one using SoundFocus’ noise tuning, and the other without. This was after tuning the system to my particular hearing, with an easy-to-use wizard that has you identify when you can begin to hear sounds at different frequencies, something Srinivasan says has been done by about 150,000 people who downloaded the SoundFocus app. Even so, the SoundFocus adaptive filters sounded muffled.

It works better as a speaker replacement

The results were slightly better when using the case as a speaker in a large conference room with brick walls and a wall-to-wall carpet. It was discernibly louder and fuller than an iPhone alone, both at close and far distances, though not as clear as the phone on its own. In any case, it did not sound close to what you’d get in a standalone portable Bluetooth speaker, which is ultimately what you’d want to compare this to. 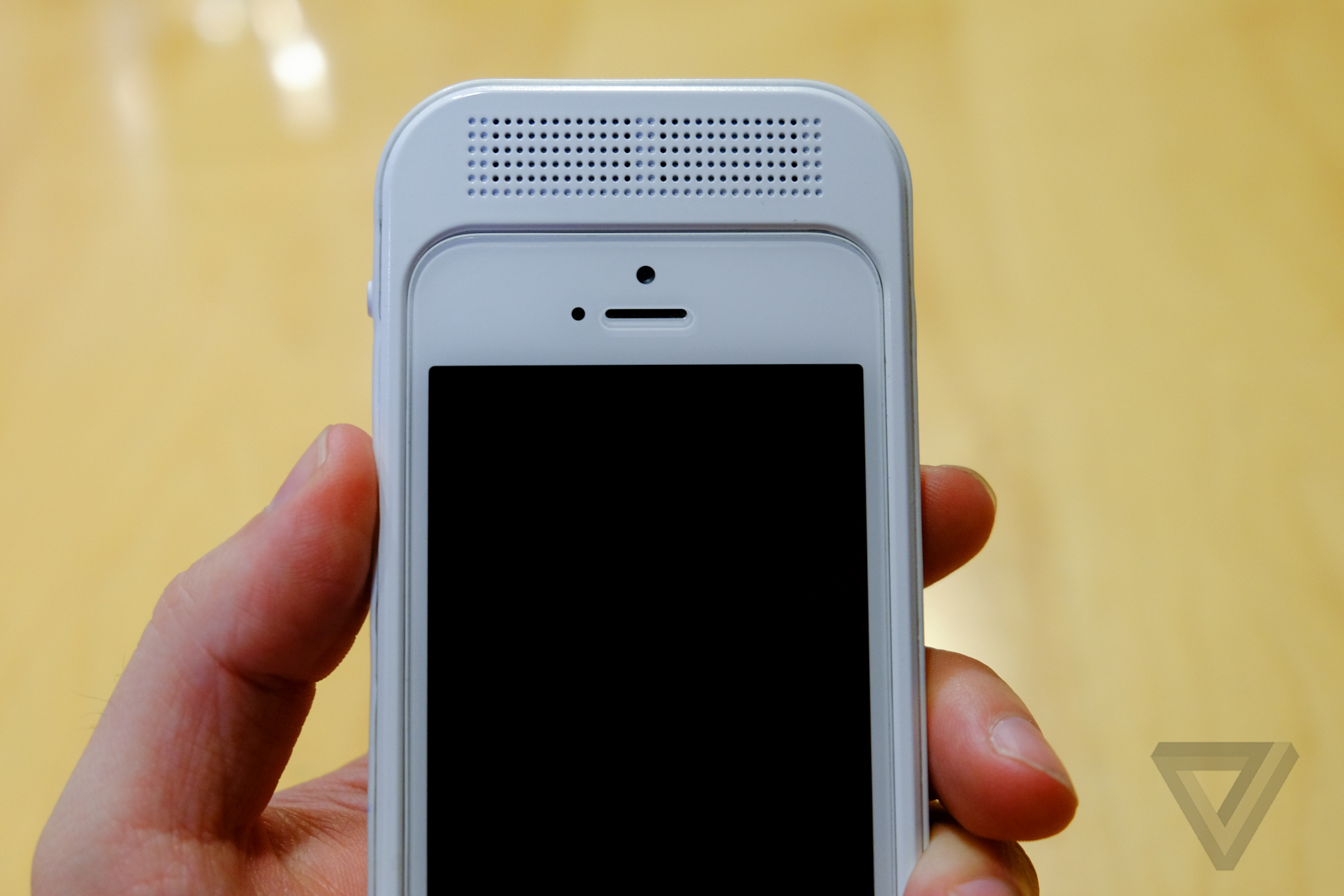 The version I tested was a preproduction model that features the same components, though was made with an aluminum backing. The version the company is selling today in both black and white as a $69 preorder (it will eventually cost $129 when it ships next spring) will be made out of a plastic that will cut the weight of the case nearly in half. Along with the audio features, it includes a battery that will give iPhone 5 / 5S owners an extra 25 percent capacity, as well as delivering power to the microphone and speakers without slurping it from your phone. The one being made for the iPhone 6 — which I did not get a chance to see — is expected to offer a slightly lesser 20 percent boost.

The Amp is just the first hardware product from SoundFocus, though others are in the works. Selig and Srinivasan are closely guarding what they’re working on next. Srinivasan only noted that he thinks voice is, and will continue to be, an incredibly important part of making wearables work as hardware continues to shrink. Pointing to the Apple Watch, for instance, Srinivasan says that touch still seems like a struggle, whereas voice seems obvious.

"As devices get smaller and smaller, one of the big natural interfaces is going to be audio: a seamless way you can talk to your devices that doesn’t take up a lot of space," Srinivasan says. "And we really see the company that’s able to build the next successful set of wearable devices is going to have to converge, and we really want to be there as the layer between you and the devices that you wear."