HTC's Desire Eye wants to be the king of selfies

It's no secret that taking selfies is a huge part of what people do with their smartphones today. Apps such as FrontBack, Snapchat, and many others have capitalized on this craze, and even Apple has made it easier than ever to send a selfie in iOS 8's Messages app. Other smartphone makers aren't oblivious to this phenomenon either: both Nokia and HTC have released phones in the past year with increasingly more capable front-facing cameras to cater to the selfie-loving crowd.

Now HTC is announcing the Desire Eye, a mid-range phone that the company says will be the selfie phone to rule them all. It will be available from AT&T later this year at a price that's yet to be determined. Where all other smartphones have their best cameras on the back of the phone, the Desire Eye has the same camera on the front as it does on the back. It's a 13-megapixel camera — the highest resolution front-facing camera to date — and features autofocus, a dual LED flash on both the front and back of the phone, and 1080p video recording. On paper, it's the most capable smartphone for selfies we've ever seen. But the Desire Eye's charms don't end with selfies: it's actually a rather impressive smartphone in its own right. 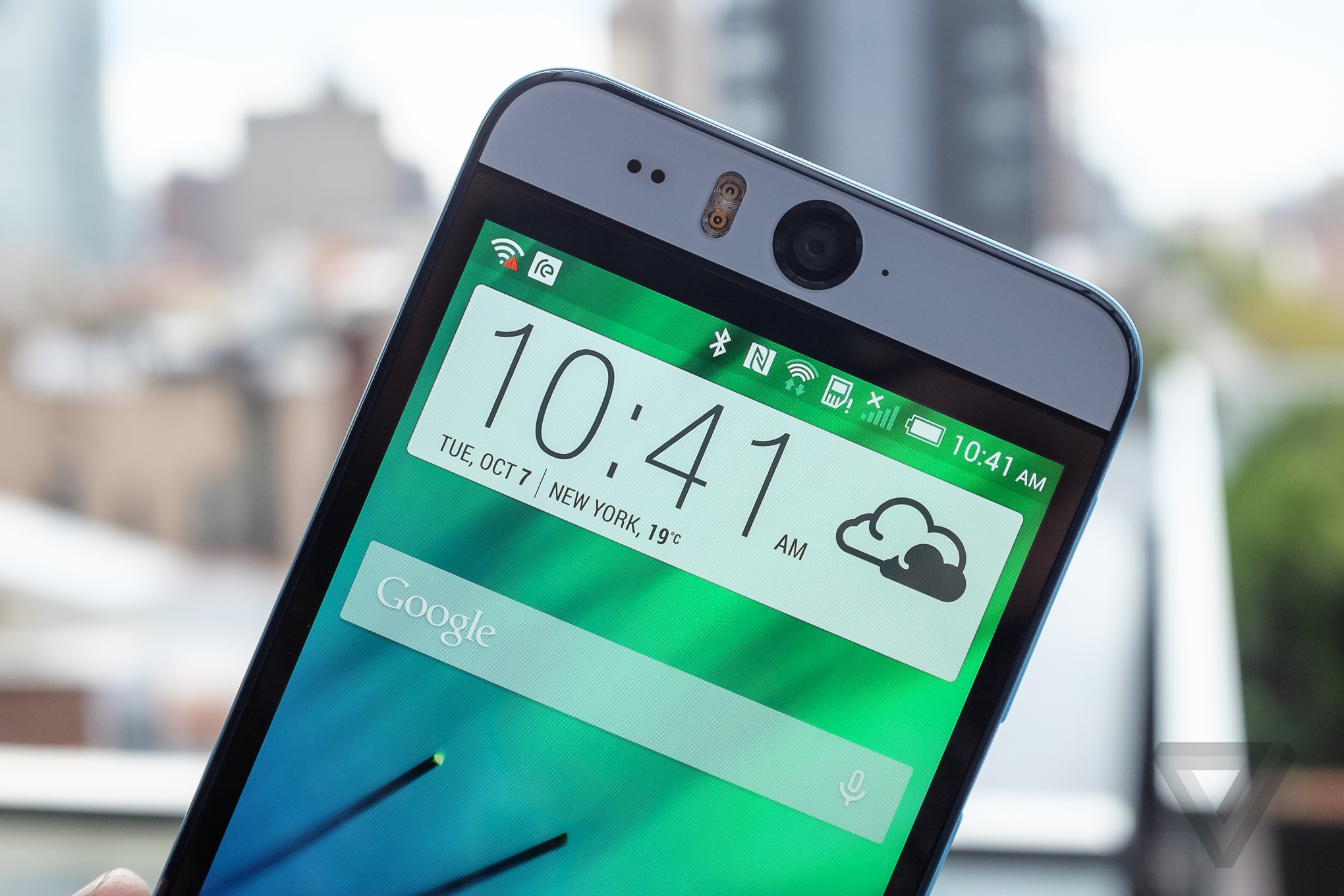 The thing about the Desire Eye is that it's just not that mid-range of a smartphone. It has a 5.2-inch, 1080p display that looks great and has wide viewing angles. It has the same Qualcomm Snapdragon 801 processor paired with 2GB of RAM as HTC's flagship One M8. Its soft-touch plastic finish isn't as premium as the all-metal chassis' of the M8 or iPhone 6, but it still feels great and is actually easier to hold on to than the more slippery metal phones. It's IPX7 water resistant, so it can be dunked under a meter of water for up to 30 minutes without issue. Its two color options — a white and red and a two-tone blue — are fun and attractive. All of those features are what you might expect from another maker's high-end smartphone, but the Desire Eye sits below HTC's best products in its lineup. While we don't yet know what the price will be when it hits stores in a couple of months, it's likely that it will cost less than the M8 and other high-end Android phones you can buy.

The Desire Eye was built for taking selfies

But the Eye was built for taking selfies, so it doesn't have the M8's Duo Camera features or Ultrapixel camera sensor on its back. Its 13-megapixel camera is fairly run of the mill — it's the same camera used on HTC's E8 and very similar to the cameras on many other Android smartphones you can get today. In our brief time with the phone, we noted that it took acceptable images in daylight and outdoor conditions, but couldn't hold a candle to the market leaders in low-light environments. We'll reserve final judgement on its performance until we have time to perform proper review.

Of course, no other smartphone has the same spec camera on its front as it does on the rear, and the Desire Eye makes its stated purpose very obvious when you first see it. The large camera is mounted dead center at the top of the phone, like an Eye of Sauron staring at you as you hold the phone. HTC has added a number of new features to its camera app to take advantage of the Eye's front camera. There's a mode to take a picture with both the front and rear cameras at the same time, a la FrontBack, and an ultra-gimmicky mode that lets you insert yourself into a scene using both cameras. You can also merge your face with another person's face to create a mutant selfie. There is a new face-tracking feature for video calls that zooms in and crop the image to a caller's visage and can support up to four different people in the same room. You can also take selfies or record video with your voice, and a new automatic mode will snap a selfie once the phone is held still and your face is in the right place. (HTC says all of these camera features, called the "Eye Experience", will come to the HTC One (M7), HTC One (M8), HTC One E8, HTC One mini, HTC One mini 2, HTC One max, HTC Desire 816, HTC Desire 820, and HTC Butterfly 2 in the coming months, as well.)

For the rest of the Eye's software, it's pretty much the same experience as the M8: it runs Android 4.4 KitKat with HTC's Sense 6.0 interface. The Eye's fast processor and lots of RAM ensures that it performs just as quickly as the M8, as well.

I tested taking selfies with the Desire Eye in a number of environments, ranging from bright outdoor conditions to dimly lit indoor environments. Despite all of the high-end specs packed into the Eye's front camera, it unfortunately didn't do remarkably better than the iPhone 6 when it came to taking selfies. Outdoor images looked good, with plenty of detail and great colors, but as soon as the light levels dropped, images became dark, soft, noisy, and just plain terrible. Contrasted with the images from the iPhone 6's front camera, which were grainy and noisy, but much brighter and sharper, the Eye just wasn't that impressive. We'll be putting the Eye through a proper review process once it's available for purchase, and HTC tells me that it's still adjusting and fine-tuning the software processing ahead of the phone's launch.

It's not clear exactly how HTC plans to position the Desire Eye in its portfolio: it's a better phone on paper than the Desire 820, but it's not up to the flagship level of HTC's One line. HTC says it will be priced higher than the 820, but it was hesitant to call the Eye the flagship of its mid-range Desire lineup. Either way, if you're looking for a good smartphone at a price less than most high-end phones sell for, the Desire Eye is an interesting proposition. Even with that giant camera staring at you all of the time.