HTC announces the Re Camera, an action camera for the rest of us

HTC is best known for its Android smartphones, but today the company is announcing the Re Camera, a device that's not a smartphone at all. The Re Camera is a standalone digital camera that pairs to either Android or iOS smartphones and is designed to make it easier to take quick photos and video. It's not unlike the ubiquitous GoPro in that respect, but HTC says the Re Camera isn't supposed to be an extreme sports action camera and is for people that are just living normal lives.

The $199.99 Re Camera has a pared-down, minimalist design, a button on the front and a button on the back, and a couple of LED indicator lights. There's no viewfinder, no display, and no graphical user interface. Its 16-megapixel sensor is set behind an ultra-wide angle (146-degree) fixed-focus lens and can shoot 1080p HD video at 30 frames per second or slow motion 720p video at 120 frames per second. It will be available in orange, blue, teal, and white in the US later this month. 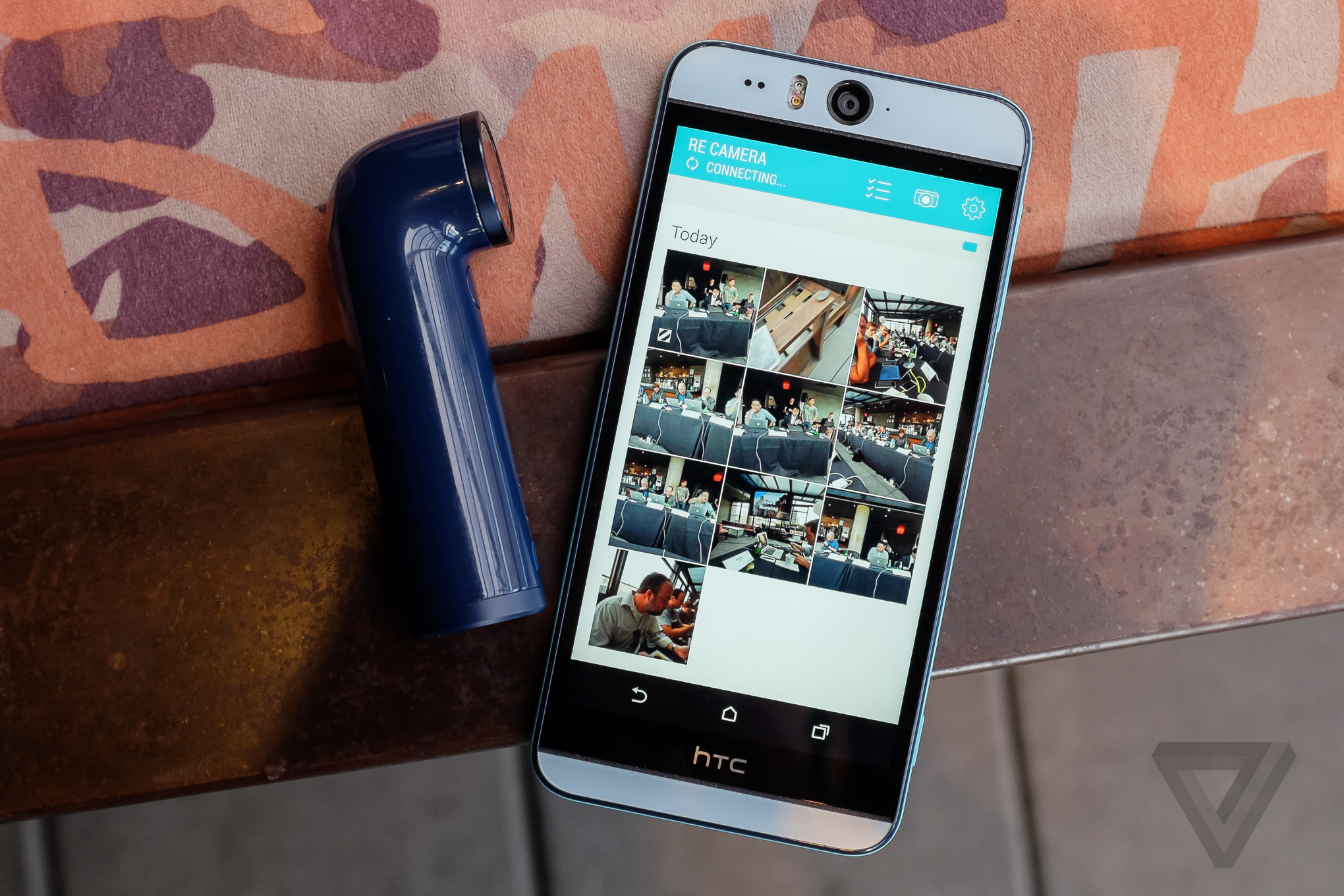 The Re Camera's design is about as basic as it can get: it looks like a miniature periscope, upside-down asthma inhaler, or a pipe used to smoke various substances. It's about as different from GoPro's blocky designs as HTC could get, and depending on who you ask, it's either cute and charming or just weird (I'm leaning towards weird). It is small enough to slip into a pocket or bag and forget about it and it's more comfortable to hold and shoot with than a GoPro. It's all glossy plastic, which makes it a fingerprint magnet, but it's solidly built and can be submerged under a meter of water for up to 30 minutes. HTC is also offering a range of accessories for the Re Camera, including a handlebar mount for bikes and a case for better waterproofing.

The Re Camera's design is as minimalist as it can get

There is no power button on the Re: it's designed to turn on automatically when you pick it up. The shutter button rests under your thumb and takes pictures with a single press or starts recording video with a long press. The button on the front of the device is used to put the Re Camera into slow motion mode. There are LED lights to indicate video recording (blinking red) and slow motion (blinking blue). You can pair the Re Camera with HTC's app on an iPhone or Android phone to transfer images and video over Wi-Fi or use the phone as a remote viewfinder and set up time-lapses. The 820mAh battery can shoot up to 1 hour and 40 minutes of continuous 1080p video, or up to 1,200 still images before needing to be recharged. It comes with an 8GB microSD card, and it supports cards up to 128GB in capacity.

HTC says the Re Camera is easier to use than your smartphone because you don't have to frame a shot or worry about opening a camera app before you take pictures. Its ultra-wide lens is supposed to capture everything in the scene for you, so you don't miss anything. And since you're not staring at your phone to take the pictures, you can still enjoy what's going on while you preserve memories for later.

But after using a pre-production version of the Re Camera, I'm not convinced that it's a better option than just using your smartphone to take pictures. On the units I tested, the Re Camera took too long to wake up from sleep, took too long to capture an image, and didn't match the image quality I can get from a good smartphone. The fixed focus lens means that anything taken in a close range tends to be out of focus, and the ultra wide-angle field of view can capture a lot of unwanted detritus that you might not want in your photo.

A timelapse captured with the Re Camera

HTC says it is constantly improving the software on the Re Camera, so it could improve the speed of operation and image quality by the time the device is available for purchase later this month. But the harder part might be convincing people why they need a $200 camera in addition to their smartphone to take pictures. And for those looking to capture their wild adventures, there are GoPro cameras that are better designed for that and cost less.

The Re Camera will be available in the US from retailers such as Best Buy first, before HTC will bring it to other parts of the world. It's the first in a line of HTC devices other than smartphones or tablets, and it's a big first cross platform step for the company. But convincing anyone to buy a not-quite-GoPro for $200 could prove an even bigger challenge than winning the Android market has been.