#Brands are killing the 'Dad Joke' one tweet at a time

#Brands are killing the 'Dad Joke' one tweet at a time

What happens when a joke is meant to make money

Do you know what bae means?

That’s not what bae means. The real definition of bae is cuter, albeit less monetizable. The noun is a popular slang term used to lovingly identify someone you’re in a relationship with, or would like to be. Some corners of the internet say it's an acronym for "Before Anyone Else." 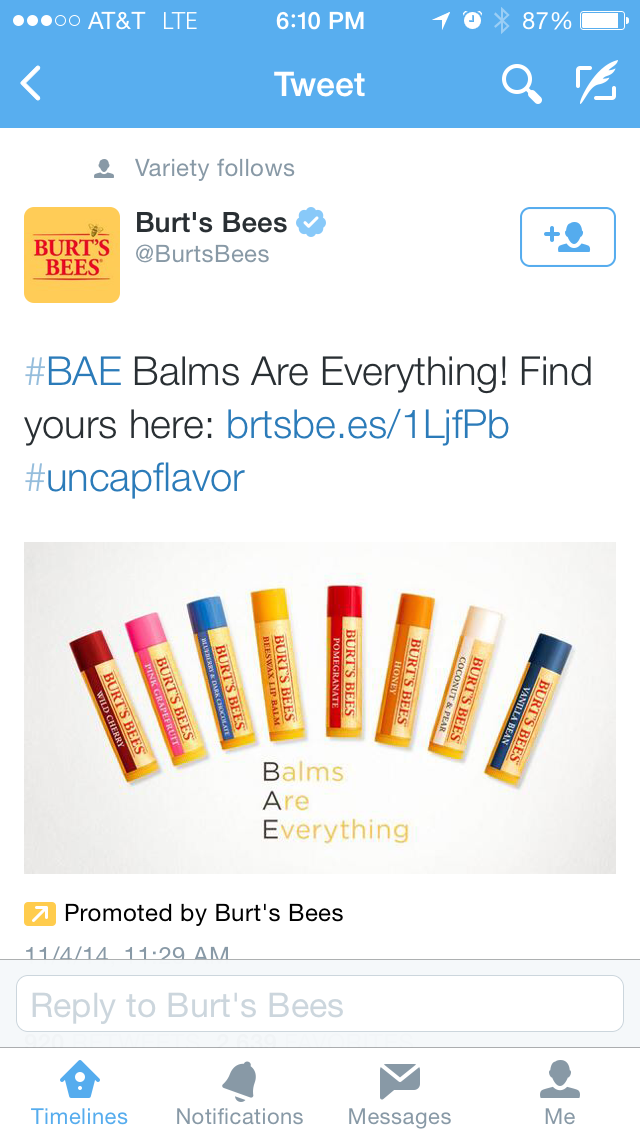 "Bae" has inspired a meme, written like "When bae [does something]" and accompanied with a reaction image or video. Here are some examples.

When bae goes ghost and then hits you with that "I miss you" text pic.twitter.com/Re6n1zRkX7

when you and bae break up but you still have them as a friend on snapchat pic.twitter.com/y9OTRP7niB

When you see bae flirting with someone on twitter ! pic.twitter.com/6LRdAwpSsU

So why did Burt’s Bees butcher bae?

For the chapped among us, Burt’s sells lip balm. Because #BAE was trending, and because #BAE has the letter b in it, and because balm begins with that very letter, the company — specifically its social media attendant — took the opportunity to co-opt a non-commercial movement with a nonsensical advertisement. They took something sweet, and made it soulless. It's fadvertising and trend trolling.

This isn’t the first time it's happened, nor is Burt’s the first company to do it. The tweet is merely one incident in the sudden, mind-numbing rise of the weaponized dad joke.

They took something sweet, and made it soulless

For decades, humanity has suffered the dad joke, a brand of humor protected and perpetuated mostly by fathers. The dad joke is unique amongst other jokes in that it doesn’t require an understanding of its subject. All you need to make a dad joke is the basic understanding of puns. For extra dadness, you might include an additional phrase that young people used within the past decade.

In the age of Twitter, the dad joke has been deconstructed by #Brands.

#Brands lack style, taste, and maturity. #Brands see the internet, and its strange and beautiful power as an agent for communication, as little more than a vessel for marketing. #Brands co-opted and contort trends for selfish purposes. #Brands are ruthless in their commoditization of culture. With a humorless social media guru and a marketing budget that could pay buy a nice home in Manhattan, they consume moments and memes, and evacuate them as 140-character piles of shit.

You came to Twitter to grieve the tragic death of a beloved celebrity, but if #Brands have their way, you’ll leave hungry for pizza bites. Burt’s Bees is a #Brand, one of thousands.

Example of a brand using a trending topic without understanding the context #Advertising #SocialMedia #WhyIStayed pic.twitter.com/iTSmfaT6Xv

.@HillaryClinton's out-of-touch idea of "dead broke" is some mansions & $200,000 for a few hours work. pic.twitter.com/4axjdvtK9k

#Brands are destroying the dad joke, a brand of humor as light as a feather and as warm as a Cosby sweater. A dad joke is a sign of love by someone, not just a dad, to connect or relate with what interests young people — even if the joke tellerdoesn’t quite understand it. The dad joke is a casual reach across the generational aisle.

But for #Brands, the commoditized joke serves a different purpose: to take what interests you, and turn it against you. A #Brand doesn’t care about you or your bae, so much as it cares whether you and your bae buy lip balm.

UPDATE: In the original version of this post, I incorrectly claimed bae isn't an acronym. Credit to Thom Atkinson for the fix.