Cat genome may explain how we got such ferocious pets

Cat genome may explain how we got such ferocious pets

Domestication appears to have driven changes in genes associated with learning

The ordinary house cat, best-known for its sleeping habits and hunting prowess, is smarter than its feral peers, according to scientists who have mapped the cat's genome. An analysis of the the domestic cat genome suggests changes in genes associated with memory, fear-conditioning, and learning. Those genetic changes may reflect cat owners breeding tame animals over our 9,000 years of coexistence.

Scientists sequenced the genome of a female Abyssinian cat named Cinnamon, and compared it to genetic assemblies of six other domestic cat breeds, two wild cat species — the European wildcat F. silvestris silvestris and the African wildcat, F. silvestris lybica — and four other mammals, including humans and cows, according to a report in the Proceedings of the National Academy of Sciences. 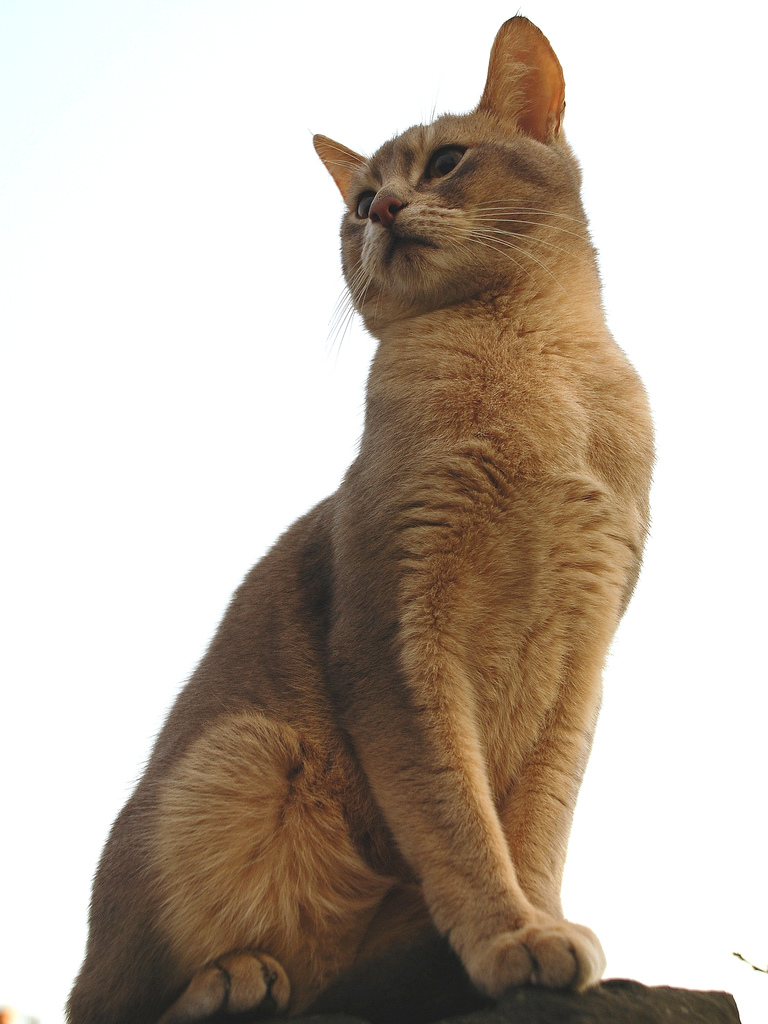 Cat breeds emerged relatively late, compared to dog breeds, says Wes Warren, an associate professor of genetics with the Genome Institute at the Washington University of St. Louis's medical school. Most cat breeds are only about 150 to 250 years old, differentiated mostly by coat patterns. In contrast, dog breeds are widely differentiated, based on function: some were bred to herd animals, others to hunt, and still others to sit in the laps of human companions. And about 14 breeds of dog are considered "ancient," or older than 500 years.

Unlike dogs, which have a common ancestor in the wolf, domestic cats aren't a separate species from their wild counterparts. That means ascertaining differences between domestic cats and feral cats can be difficult, since the two populations routinely interbreed, says Warren, who was also a study author. Their domestication process was also different, since dogs are social animals and cats are mostly loners.

"We thought, maybe we won't see clear domestication signals," Warren says. "We were surprised to see the signatures we did, and are even more upbeat to discover they're involved with neuronal processes."

Unlike cats, living with humans appears to have made dogs dumberThe genetic clues that suggest our domesticated cats are better at reward-motivated behavior may explain how cats were tamed. Cats probably started prowling around early granaries to feed off the mice drawn to human harvests. Ancient cats who were willing to remain docile with humans for food rewards were probably the origin of tame felines, Warren says.

That's decisively different from dogs, who were already settled in European villages 10,000 to 13,000 years ago — in their modern form. And unlike cats, living with humans appears to have made dogs dumber than their wolf cousins. That's probably because domestication process was very different, since dogs are social animals. Cats, however, "prefer solitary lifestyles, if you can say cats have lifestyles," Warren says. That may mean that dogs "piggybacked" humans onto already existing social cognition; with cats, though, domestication may have resulted in genetic changes to their brains, with the animals most likely to respond to rewards the ones most likely to have been tamed.

"Carnivores are such a fascinating group of species."Other changes found in domestic cats weren't obviously linked to their human admirers. Genes involved in metabolizing fats changed to support a hyper-carnivorous diet — that is, a diet that's more than 70 percent meat. "If we humans were to employ that same diet, we'd have complications like coronary heart disease," Warren says. Further study of how obligate carnivores, animals who eat only meat, process their diet may lead to breakthroughs for human health, he says.

His group also found genetic changes may be associated with hunting, such as better hearing and vision, and larger chunks of genes that give cats the ability to sense pheromones. Cats have the broadest known range of hearing and an extremely keen sense of sight, especially in dim environments.

"Carnivores are such a fascinating group of species," Warren says. "We need to go deeper and sequence more carnivores to learn more about which of those changes are due to the domestication process."