I caught the thief who stole my iPhone

I caught the thief who stole my iPhone

My iPhone 6 Plus got stolen at a bar. I got it back using Find My iPhone.

You often hear about phones getting stolen, but I never thought it would happen to me.

Earlier this year, my 5S was stolen because I placed it on a bench while I was skating. Stupid me, I know. This time, though, in my second phone theft, my iPhone 6 Plus got taken right out of my back pocket. Unlike my 5S, my 6 Plus has the Find My iPhone app set up properly. Here’s my story.

It was like any other Saturday night out in New York City, where bar-hopping and seeing shows is the norm.

I ended up at a local bar pretty late, around 3AM, and was having some beers with my brother. Shortly after arriving, I noticed that I didn’t have my iPhone on me. I hastily patted myself down, feeling each of my pants and jacket pockets, but there was no iPhone. I didn’t remember putting it down anywhere, and my mind began to race; I asked myself over and over, "Where is my iPhone?"

The panic settled in

Over the last week or so, I’ve been experimenting with keeping my 6 Plus in back pocket because it’s so damn huge. Skating or even just walking with a pancaked brick in the front pocket of your tight jeans is less than ideal. Our reviews coordinator William Savona keeps his iPhone in his back pocket, and after reading Dan’s piece and discovering that he too keeps it in there, I gave the back pocket a chance. That night in the bar, I had it in my back pocket. Someone must have taken it without me noticing. The panic settled in.

My brother immediately pulled out his 6 and called my phone. The call went through, but no one answered. Thankfully, I had Find My iPhone set up on my 6 Plus, so I grabbed the phone from him, went to the App Store, and downloaded the Find My iPhone app.

My heart was racing, and I was feeling terrible, angry, and overall confused. "Did I leave my phone somewhere?" "Did I even have my phone at this bar?" "I don’t remember putting it down for a second." Thoughts like these flooded my brain as the app was installing. I signed into my iCloud account as soon as it was done. There it was, a flash of hope — my phone was somewhere in this bar.

When you track your iPhone using Find My iPhone, you are given three options: play a sound on the device, put the device in Lost Mode, or erase the device completely. You’re also shown a map with the device’s last known location, which seems to update every 30 seconds or so, as long as your phone is still on.

So there I was in the bar, holding my brother’s 6 with Find My iPhone open. I began hammering the Play Sound button, hoping I’d hear the ringing somewhere in the bar. I decided to walk around and look for it using the phone’s flashlight, but the bar was packed, the music was loud, and people were drunk. 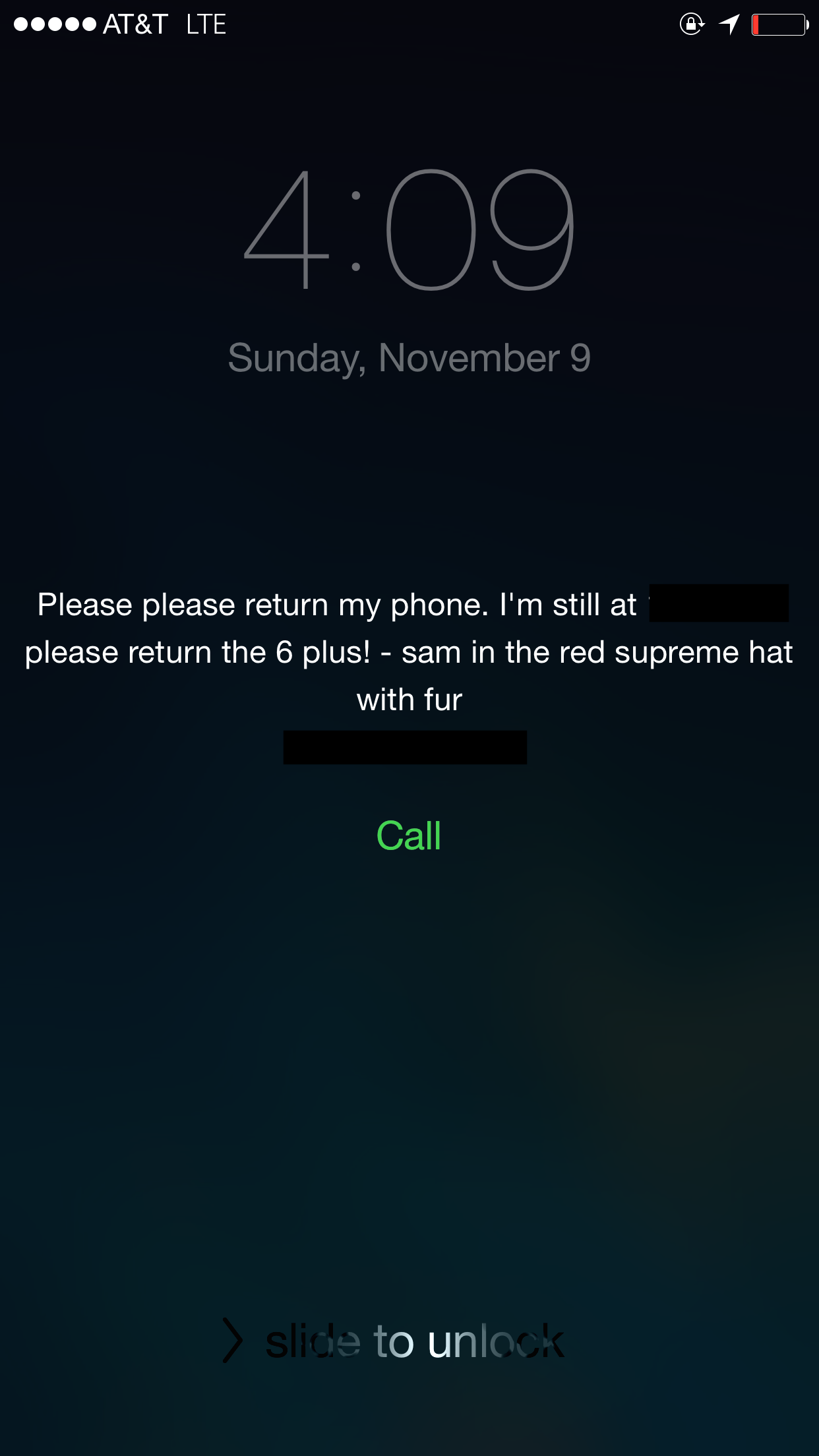 I put my phone in Lost Mode soon after that, because frankly I didn’t have many other options. I wasn't even sure what Lost Mode did, but I went with it anyway. When you enable Lost Mode, you’re asked to enter a phone number you can be reached at (I entered my brother’s phone number), and you can enter a message. I wrote something along the lines of "Please please return my phone!" Maybe someone had my phone, or maybe it had fallen on the ground somewhere. I also had no idea if the message I typed out was going to be sent as an iMessage, shown on the phone somewhere, etc. But again, there wasn't much else I could do.

Earlier that night, I had seen a show with my brother in Brooklyn. He found a phone on the ground during the performance, and after the show ended, someone was hastily searching the ground for — guess what — that exact phone. My brother returned the device and his good deed was done for the day.

Fast forward, and we’re back in the bar. The thing about Find My iPhone, is that it’s not 100% accurate to the point where you can track it to the inch, or even foot — the icon kept shifting around every so often, and there was one point where I thought the thief had left the bar. I ran outside and continued smashing the Play Sound button, but the icon jumped back to the bar. I went back inside.

It was nearing closing time, 4AM, and I had been pressing the Play Sound button for 45 minutes straight. As people were exiting the bar, I began asking if they had seen a 6 Plus on the ground somewhere. I was very careful not to accuse anyone of stealing it, because that wouldn’t have been a smart idea.

I was about to give up. I went over to the manager (who knew my situation) to let him know that I hadn’t found it yet, and then it happened: the phone icon jumped across the street. The person left the bar. This was my chance.

This was my chance

The manager apologized again and wished me luck. I got my brother and told him with my sternest face, "They’re across the street; let's fucking go."

We exited the bar and ran across the street. As I was crossing, the blip moved again, appearing to be on a sidewalk corner a block away. My phone was near, but I didn’t see anyone at the exact location Find My iPhone was directing me to.

I then noticed group of people on the street — a man waving a handkerchief at a cab, perhaps trying to flag one down, and three younger guys. The man didn’t get in the cab and instead walked back onto the sidewalk. Something came over me. I cannot explain exactly what, but I knew this was the guy.

How do you approach a thief?

In my 24 years I’ve never been in a fist fight and I’ve never confronted someone in a situation like this before. How do you approach a thief you know for a fact stole your $900 cellphone? What do you say? What do you do?

This is the moment my instincts took over. I didn't feel fear. I felt confident. I had absolutely no intention of starting a fight. I just wanted my phone back.

The man who had my iPhone suddenly stopped on the sidewalk. I heard the ringing myself. My brother and I swiftly approached him. There were no words exchanged, just the blaring sound coming from my iPhone in his jacket pocket.

"My iPhone! You have my iPhone! Holy shit man you found it! My iPhone! It’s ringing in your jacket!" I said all of that with the biggest smile on my face, acting as if I had just won the lottery. (I pretty much did.)

Without saying a word, he pulled out my 6 Plus from his jacket pocket, and I took the phone out of his hands. Find My iPhone worked.

My brother and I exchanged some words with the thief, and we joked and laughed about random things — mind you, it was after 4AM, and we had been drinking.

The thief claimed he was at the bar when he came across the phone. I don’t remember his exact words, but he says he was going to wait by his car for a minute, hoping someone would come and find it.

It’s crazy to think about the tiny window of opportunity I had to get the phone back. Had I not run across the street the second I did, had I not been stricken with a divine instinct that that was the thief, had my brother’s iPhone not been charged, I may have never seen my phone again. But I did. Persistence is key. Karma is a real thing.

Here’s what you should take away from this story:

After I got home, I had realized something critical: the thief never turned off the phone. Why? Usually, the first thing someone does after they steal a phone is power it down to cut off any location tracking. Why didn’t he turn the phone off? My theory is that he simply didn’t know how to. Maybe he wasn’t familiar with the new power button placement on the 6 and 6 Plus. Maybe. I don't know. All I know is that he didn't turn it off, and that's what saved me.

If you’re wondering why I didn’t get the cops involved, I was so determined to get my phone back that I don’t remember the thought ever crossing my mind. As soon as the blip moved across the street after the bar closed, I had a feeling I’d see my phone again. Unexplainable and crazy, I know, but it happened. And I have my iPhone back.

Obviously, if you ever find yourself in a situation like this, you should alert authorities and stay back — the guy who stole my phone could've easily had a weapon. I could've gotten hurt. I'm glad I have my phone back, but don't do what I did.