A professional-wrestler-turned-comic-book-writer? To some people, that might sound utterly ridiculous. Watching wrestlers try their hand at acting is bad enough. Dwayne Johnson and Dave Bautista have successfully made the rare leap from the ring to Hollywood stardom; most grapplers embarrass themselves trying. But writing superhero stories? That's an entirely different type of challenge. Thankfully, if you're familiar with the name CM Punk, you know he's more than qualified for the task of conjuring up a killer comic plot line. And that's exactly what he'll be doing for Marvel.

Today the company announced that Punk (whose real name is Phil Brooks) is handling writing duties for February’s Thor Annual #1. He's been paired up with Rob Guillory, a friend and artist who's also new to Marvel, to produce "a story about young Thor." Punk seems to appreciate the fact that he's been given control over one of Marvel's "heavy hitters," and he's dead-set on making the most of this writing gig.

"I think we’re kind of under the radar, and there’s not really a whole lot of pressure on us to deliver some sort of a magnum opus as a 10-page backup story in an annual, so I think we have a lot of freedom that could be really fun," he told Marvel in an interview. Punk said he's leaning towards choosing the "Marvel Model" for his first time out, where the writer and artist collaborate on a story, but specific dialog isn't added until after the comic's been illustrated. As for what's to come in the story, Punk gave an outline of sorts:

So the idea was, let’s do a story about young Thor as kind of a brash, bratty teenager who’s like, "I’m totally worthy of this hammer. My dad’s full of [expletive]. I don’t know why I’m not ‘worthy’ of the hammer. Look at all this cool stuff I did." And it’s more or less like a drinking story. He’s gonna be sitting around with a few choice characters from the Marvel Universe, and they’re all gonna be drinking, and Thor’s gonna basically be complaining about essentially why his dad won’t give him the keys to the car.

It's been about 10 months since Punk, one of the more gifted performers to rise up through WWE's ranks in the last decade, abruptly walked out on the company. He held Vince McMahon's top title for more than a year, but that's nothing compared to CM Punk's lifelong affinity for comic books. The tattoo of a G.I. Joe Cobra sigil on his right shoulder is just one clue pointing to Punk's passion. When he was still entertaining wrestling fans, Punk would shout, "It's clobberin' time!" as he approached the ring — borrowing The Thing's pre-brawl catchphrase — and he'd often tweet about the trade paperbacks that served as reading material between his WWE appearances. ("I travel so much that single issue comic books never really held up," he explained in the Marvel interview.) 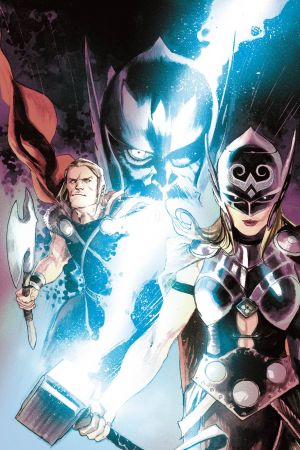 The cover art for Thor Annual #1.

But now, outside of intermittent appearances for Chris Hardwick's Nerdist and one-off gigs, Punk has largely disappeared from the public eye — a change of pace he seems to be enjoying. Thankfully, for fans eager to reconnect, he's got bigger ambitions for the future: Punk said his dream is to write a story for The Punisher that's been kicking around in his head for years. "So until they let me do that, you’re gonna get all kinds of other stories about all kinds of other characters until they satisfy this need I have to write Frank Castle."