Biological fungus drone melts into a puddle of goop if discovered

Biological fungus drone melts into a puddle of goop if discovered

Everything except the rotors and battery, anyway

A biodegradable drone made mainly of mushroom material has completed its first flight. The quadrotor drone was built at NASA's Ames research center, and is the first step to producing an unmanned aerial vehicle that operators can use to explore remote locations without potentially contaminating them with old electronics, or to spy in sensitive areas before allowing the device to melt away into the ground. 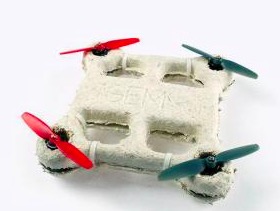 The drone's chassis was made of mycelium, a fungal material that can be grown into specific shapes, from packaging to surfboard cores. That mycelium was given a covering of cellulose "leather" sheets grown by bacteria, before being coated in the same proteins that paper wasps use to coat their nests, cloned from the insect's saliva. Even its circuits were printed with silver nanoparticle ink to aid biodegradation.

The drone's body was made of fungal material mycelium

While the majority of the drone will break down into organic waste, some parts of it were less environmentally friendly by necessity — the device's propellers and controls were taken from a standard quadrotor drone. Crashing a biodegradable drone in enemy territory could eventually let governments feign ignorance of spying programs, but plausible deniability might be tricky if the puddle of mushroom goo is accompanied by a set of four brightly colored plastic rotors.