Windows Phone users are used to waiting for Microsoft to deliver on its promises, but the company has been testing their patience recently. Microsoft has abandoned its "first and best on Windows" strategy in favor of cross-platform apps that are nearly always better on Android and iOS than their Windows tablet and phone counterparts. Office is the latest proof of a continuous trend that’s leaving Microsoft’s most-loyal Windows customers out in the cold.

After shipping Office for iPad earlier this year, way ahead of a touch-optimized Windows release, Microsoft followed up with an even better version for the iPhone last week. While the initial Office for iPhone app, released last year, offered basic editing like its Windows Phone counterpart, the new app goes way above and beyond the functionality Microsoft ships on Windows Phone. Comparing the two almost feels unfair at this stage. Microsoft is working on new touch-optimized versions of Office for Windows tablets and phones, but the company won’t deliver them until Windows 10 is ready next year. It’s another period of waiting for Windows fans.

Skype for iOS is a much better experience than Windows Phone

Windows Phone owners have also been waiting for years on improvements to the Skype experience. During that time, Microsoft has released an overhauled version of Skype for iPhone alongside some big improvements to Skype for Android. Both Skype for iOS and Android are better than the slow and sloppy app on Windows Phone. Microsoft had the opportunity to deliver its best Skype experience on its own platform, but it's the iOS app with its beautiful animations that wins hands down.

Skype for Windows Phone vs. iPhone

It’s not just Skype and Office where Microsoft is failing to deliver a good Windows experience for its services and apps. OneNote is far superior on Android and iOS, and Microsoft’s latest OneDrive update for Windows Phone has been met with a lot of negative feedback. Microsoft was forced to acknowledge this and promise "we’re in the process of improving the usability and polish of our app." Likewise, Xbox Music has struggled to be a reliable app on Windows Phone recently after Microsoft separated it from the core operating system. The old promise of built-in Windows Phone features like Office was originally desirable, but this bundling has hurt Microsoft as it struggles to now separate them out to accelerate app updates.

There are exceptions, though, and Xbox One SmartGlass is an example of a cross-platform app that’s practically identical on Android, iOS, and Windows Phone. That could be because Microsoft has largely abandoned its unique "Metro" design principles to create apps that look the same across Windows Phone, Android, and iOS. There’s still a wait for the Windows functionality to match across most of these apps, though. 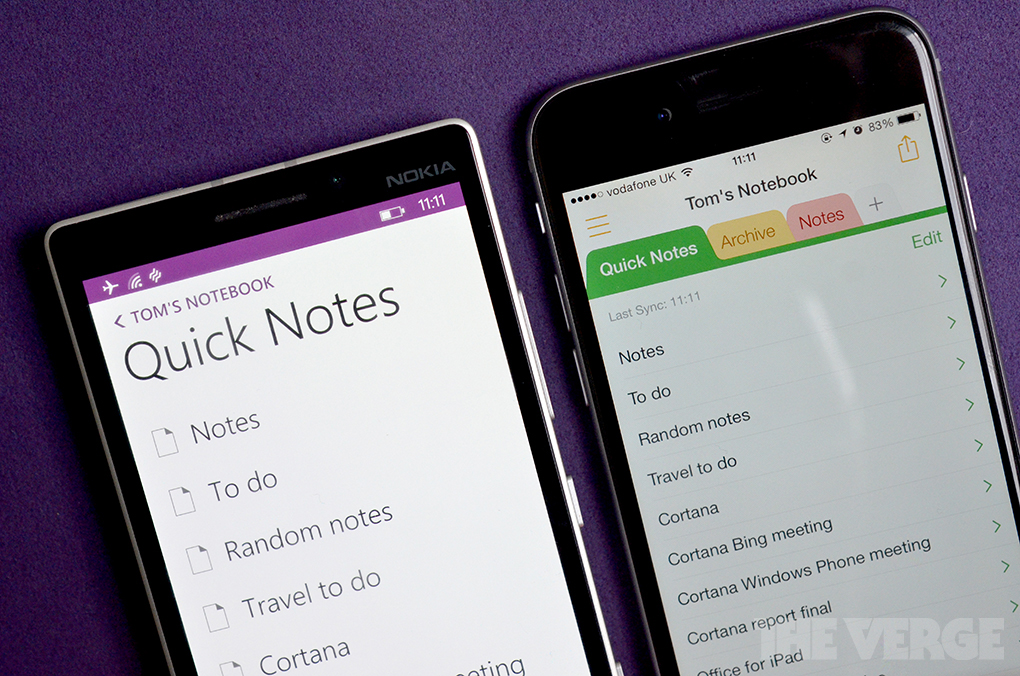 That waiting game has been common across Windows Phone’s lifetime. Windows Phone 7.5 (Mango) added some much needed features but didn’t go far enough, Windows Phone 8 (Apollo) was an overhaul with new hardware support and no upgrade path for existing devices, and Windows Phone 8.1 finally delivered on features with a promise of universal apps that haven’t really materialized from Microsoft let alone third-party app developers. Apps that run well across Windows tablets and phones is the eventual goal, but rival platforms are seeing the benefit of Microsoft's apps right now.

There's only so long Windows users will remain loyal

Microsoft is sending a clear message that it wants to reach consumers on popular mobile platforms. That’s an understandable move, but with a lack of a true Windows Phone flagship this holiday and hints that unique features like Cortana will make their way to Android and iOS, it leaves Windows Phone in an odd spot. If all of Microsoft’s core apps and services work better on Android and iOS, it makes Windows Phone a lot less appealing. If Microsoft can’t even make good apps for Windows, there's not a lot of hope left for third-party app developers to build for Microsoft’s mobile platform. Couple that with the Windows tablet and phone app gap, and the future looks increasingly bleak. Appealing to Android and iOS users might be Microsoft's goal, but there's only so long Windows users will remain loyal.