The first official Batmobile ever built is headed to auction

The first official Batmobile ever built is headed to auction

If you're a fan of old-school Batman comics, there's really only one Batmobile for you. It's not Zack Snyder's brand new model, nor is it Christopher Nolan's tank. Not even Tim Burton's slick version or the legendary customized Lincoln used in the ’60s TV series will do. No, this recently-discovered Batmobile built from a 1956 Oldsmobile is the only real option for lovers of the original comics.

The hand-built car is said to be the very first officially-licensed Batmobile ever made, and it's up at auction now for a starting price of $90,000. Unlike all of the other Batmobiles, it evokes the original design used in the 1940s comics: a massive center tail fin, long swooping lines, and a bat face for a front end. 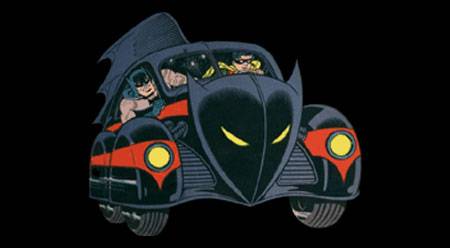 According to Heritage Auctions, the Batmobile was built and designed by 23-year-old Forrest Robinson in a barn in 1960. He completed the project in 1963 after replacing the body of a 1956 Oldsmobile 88 with his own custom design. For the next three years it toured the country as an official promotional vehicle before the George Barris-customized Lincoln Futura concept from the TV show took over. The ’63 Batmobile was relegated to obscurity and spent nearly 50 years in a field before it was rediscovered and restored in 2008. Now it's looking for a new home.