Anabolic steroids have been used by athletes, bodybuilders, and others for years to get bigger, go faster, and last longer in competition. They often work — fantastically so — but not without detrimental effects to the user’s health, mood, and general well-being. Unsurprisingly, the use of steroids is banned from virtually all athletic competitions all over the world.

I’m not saying Verizon and Motorola injected the Moto X with anabolic steroids to create the $199 Droid Turbo, but they may as well have. The Turbo takes the Moto X and pushes it to its extremes: it has a faster processor, a higher-res screen, a higher-res camera, and perhaps most importantly, a much larger battery. On paper, the Droid Turbo is everything the Moto X is, only bigger, faster, and longer-lasting.

But just as you can’t get juiced up on steroids without any consequences, the Droid Turbo provides a very different experience than the beloved Moto X does. Oftentimes, it’s not any better. 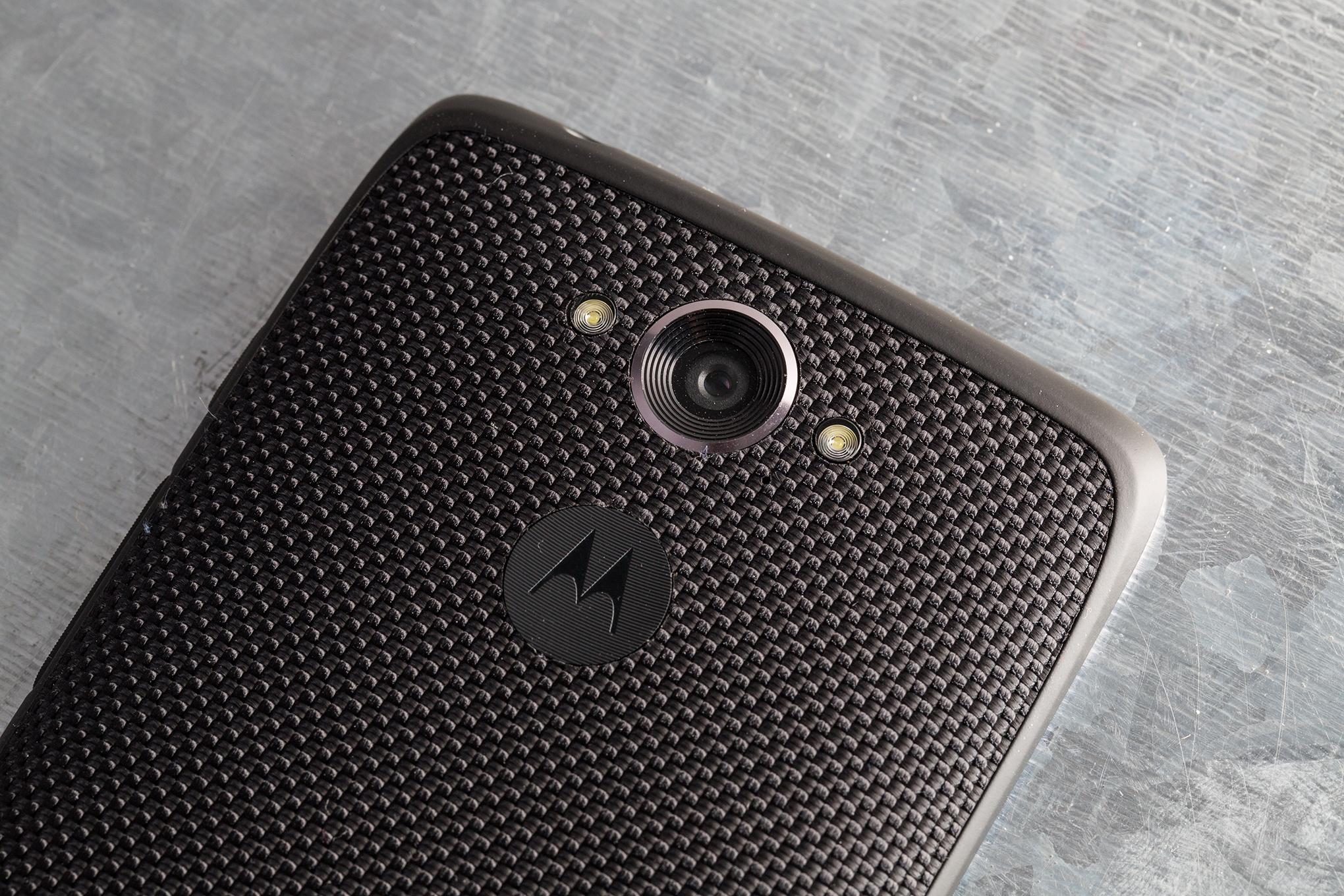 The Moto X that Motorola released this year was a fantastic refinement of last year’s design. It’s slim in all the right places, has premium materials, and can even be customized with wood or leather finishes. The X’s design is a big part of what makes it my favorite Android phone of the year.

When I look at the Droid Turbo, I struggle to see any of those design refinements. The Turbo is chunky, heavy, and just plain ugly. (Some of that comes down to the greater weight and thicker profile of the Turbo, both of which are due its massive battery.) The X’s metal frame is gone, replaced by a mundane soft-touch plastic, and the useful on-screen navigation buttons have been swapped for outmoded capacitive keys. Where the X curves, the Turbo is sharp. 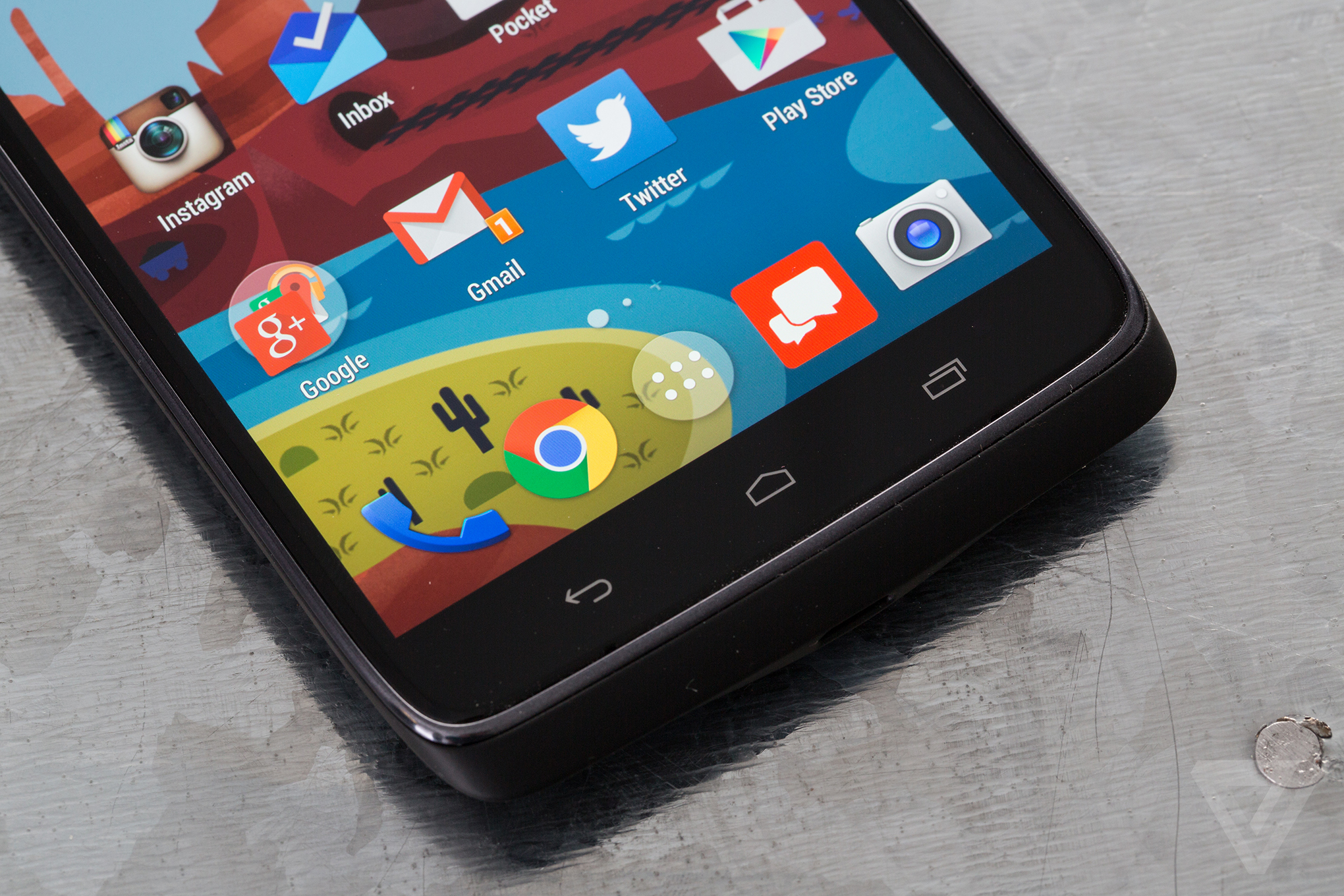 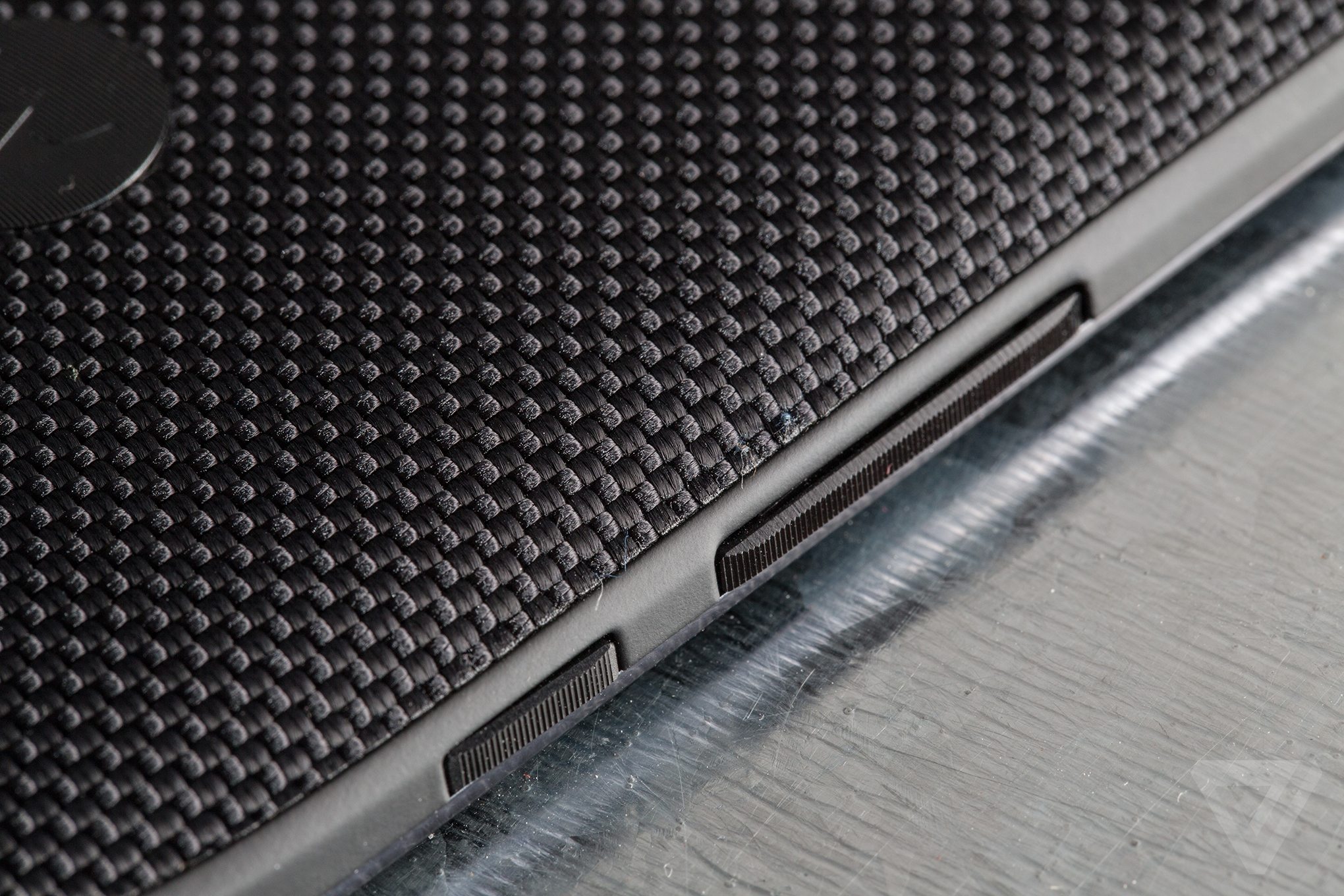 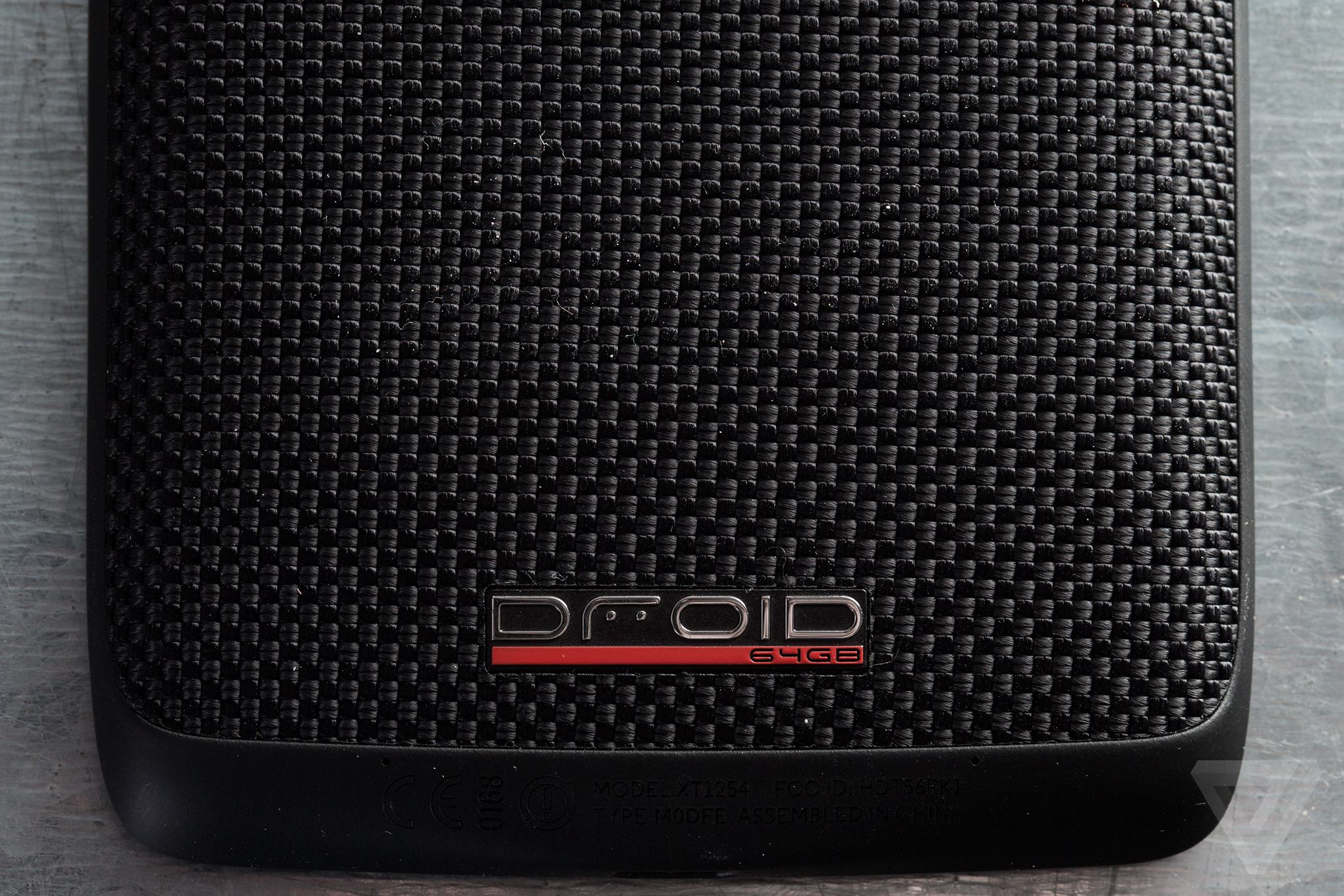 There aren’t any customization options — no wood backs or leather finishes — for the Turbo, but Verizon is selling it in three different colors. The first two (a glossy black or glossy red) are just ugly, but the third one is unique. Verizon calls it Ballistic Nylon, and it has a textured fabric finish that reminds me of the nylon straps on a backpack. It’s almost like the Turbo is wearing a bulletproof vest, which is probably exactly what Verizon wants you to think based on the ultra-aggressive marketing campaigns for the Droid line. The textured finish provides a little grip and resists getting scratched or dented like other materials, but I’m concerned the fibers will fray over time (and some already have on my review unit). It’s clear Verizon thinks this phone isn’t for the dainty — it’s heavy and tough and aggressive and projects a far more masculine appearance than Motorola’s other phones.

Where the Turbo does seem to take a step forward over the X is with its 5.2-inch display. It’s the same size as the screen on the X, but has a much higher 2560 x 1440 pixel resolution. It’s a lot of pixels, but the screen isn’t noticeably sharper than the X’s 1080p display. I can’t see the individual pixels on either of them, even when I strain my eyes to find them, and I bet you can’t either.

The screen is still AMOLED and comes with all of the quirks related to that technology. It has some tinting issues and color shifts, and it could stand to be brighter outdoors, but only the most discerning people will actually have a problem with the Turbo’s screen. Using AMOLED also enables Motorola’s super useful on-screen notifications, which are one of the best parts of Motorola’s smartphones.

The Turbo has a front facing speaker, infrared motion sensors, and minimal branding, just like the Moto X. But it lacks all of the personality of the X: the nifty design features, the ergonomic shape, the great-feeling natural materials. It just looks like a phone. 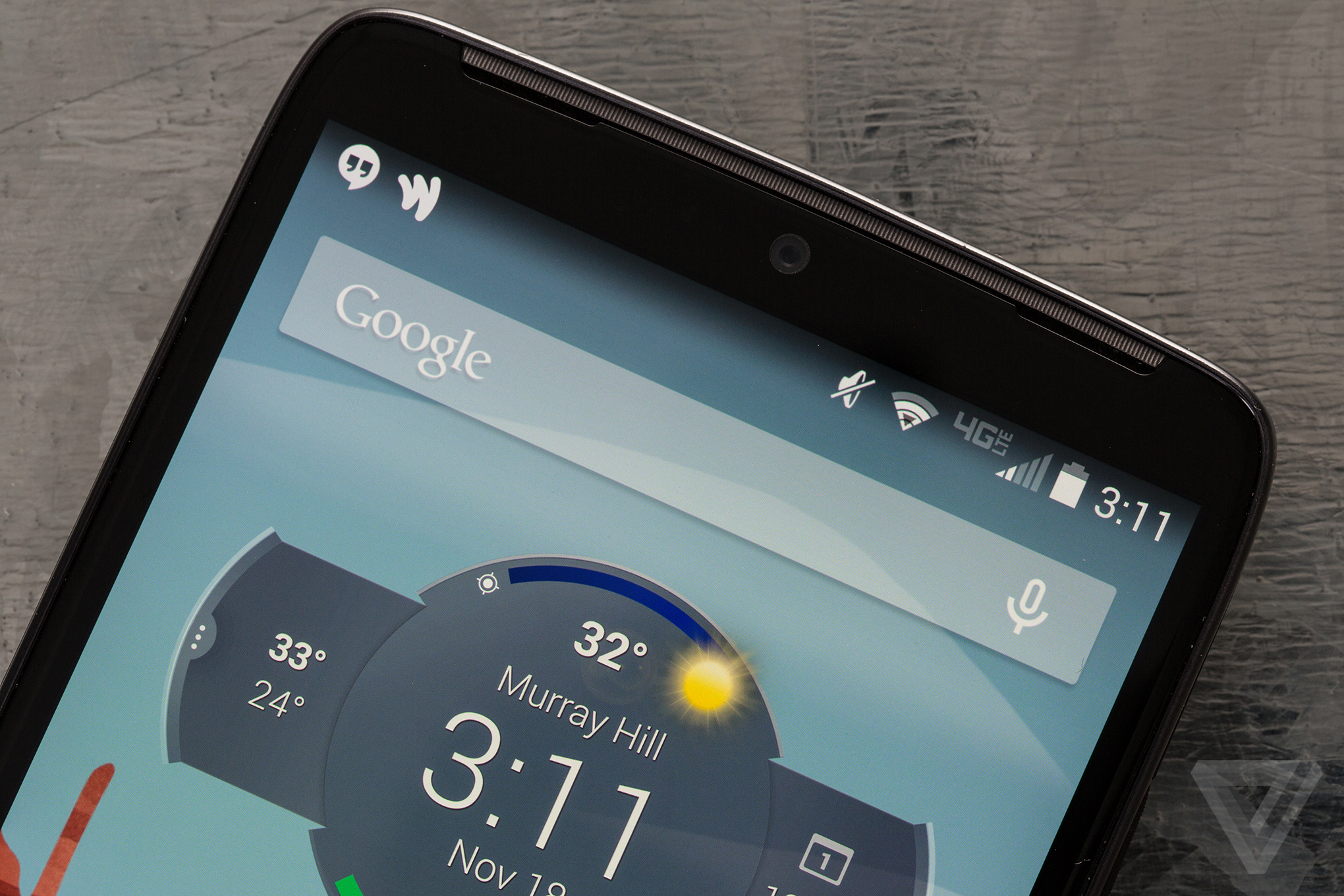 Motorola and Verizon swapped out the Moto X’s perfectly acceptable 2.5GHz Qualcomm Snapdragon processor for a slightly faster 2.7GHz chip in the Turbo. It’s paired with 3GB of RAM, and you can get 32 or 64GB of storage (for a $50 premium).

In theory, those upgrades should make the Turbo perform noticeably better than the X, but that hasn’t always been the case. Apps open quickly enough, and the Droid Turbo is certainly fast, but it’s not significantly better than the already-quick X, which makes me wonder why anyone should bother. More troubling is the weird jelly-like effect on the Turbo when scrolling within apps that isn’t present on any other smartphone I’ve used this year.

An example of the jelly-like scrolling on the Droid Turbo

The Turbo’s camera is significantly higher resolution than the Moto X’s — 21 megapixels vs. 13 — and it often takes sharper, better photos than the X. But it’s oddly slow: slow to launch, slow to focus, and slow to actually take a picture, which makes it annoying to use. I missed countless shots because my subject (usually my toddler) moved out of frame before the Turbo finally took a picture. Contrasted with the X’s lightning-fast camera, the Turbo is frustrating to take pictures with, even if they often come out looking good. I’d rather have a faster camera that takes decent pictures than a slow camera that takes better ones.

The real reason most people will consider the Turbo over the X is for its giant battery. The Turbo has a 3,900mAh cell, one of the largest I’ve ever seen and certainly the biggest among phones in the Turbo’s size class. Verizon and Motorola proudly boast 48 hours of mixed usage between charges, but my real-world tests didn’t quite match that. Over a quiet weekend, I got the Turbo to stretch to 31 hours before kicking the bucket, and on busier days its stamina was closer to 24 hours. Those aren’t shabby numbers by any means (and they are notably better than what I get on the Moto X), but they aren’t exactly mind-blowing or even up to what Verizon and Motorola claim. The Turbo’s battery life is comparable to what I get from a good phablet, like Samsung’s Galaxy Note 4.

Included with the Turbo is Motorola’s Turbo Charger, which promises to provide eight hours of life from just 15 minutes of charging, similar to what the Samsung Note 4 and Motorola Nexus 6 also offer. I put that claim to the test, completely draining the Turbo and then charging it back up while powered off. It went from zero to 15 percent in the 15-minute window, which correlates to 7.2 hours of use based on Motorola’s 48-hour claim. Going by my real-world best of 31 hours, that’s closer to 4.65 hours of use from 15 minutes of charging. Neither are bad results, but they also don’t match Motorola’s claims. A full charge from zero took roughly two hours with the Turbo Charger, which is perhaps more impressive.

Like many of Verizon’s smartphones, the Droid Turbo supports wireless charging, which the Moto X lacks. It’s super convenient to plop the Turbo down on a wireless charger and top it off, but it will take much longer to charge than with the Turbo Charger. 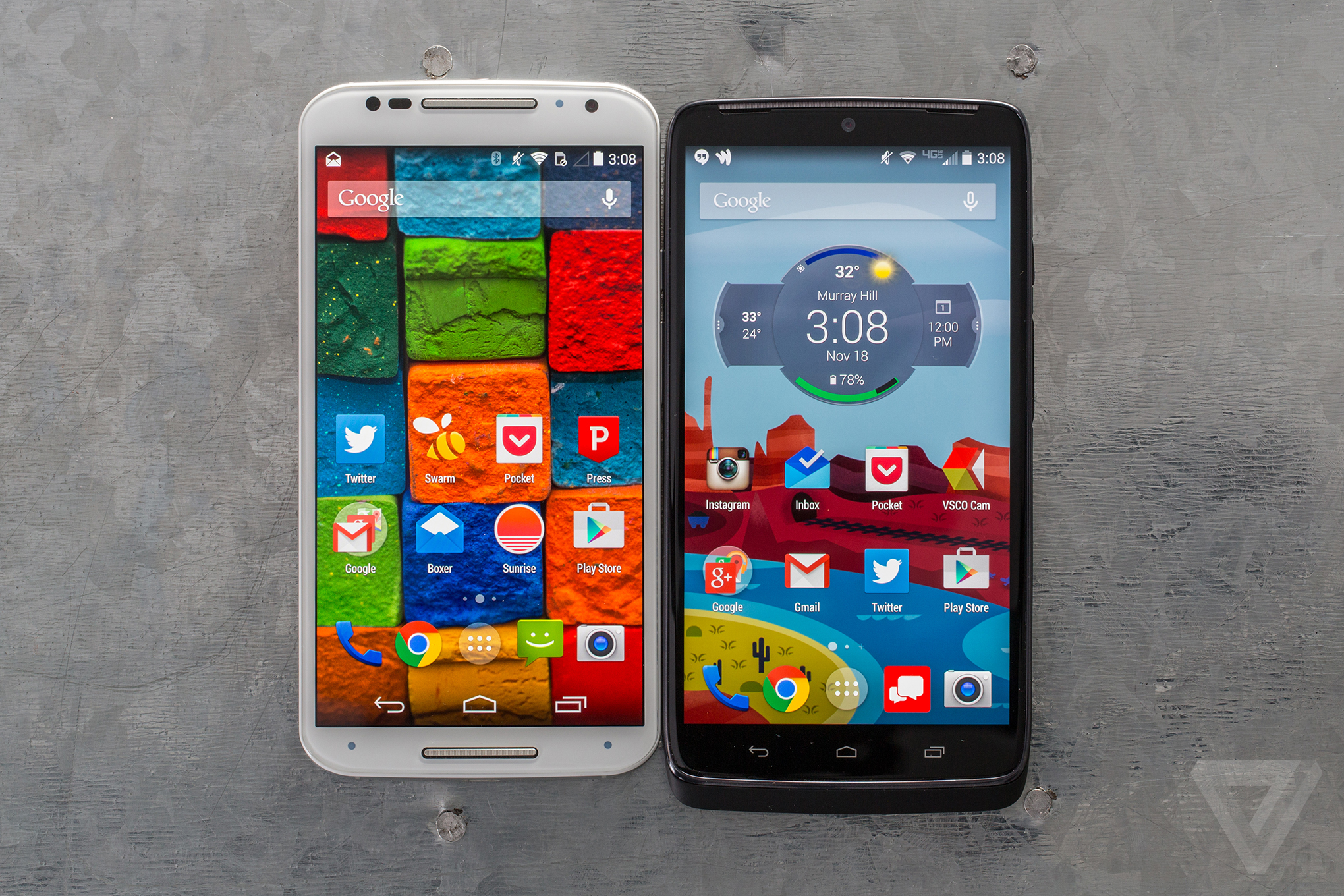 The software on the Droid Turbo will be familiar to anyone that has followed Motorola’s work over the past year: it’s Android 4.4 KitKat with just a handful of software enhancements from Motorola. (Motorola and Verizon have committed to updating the Turbo to Android 5.0 Lollipop, but there’s no specific timeline for that.) There’s no skinning, few app redundancies, and none of the cruft that other Android manufacturers often pile on top of the base system. The Moto Voice and Moto Display features from the Moto X are carried right over, as well as the quick launch gesture to bring up the camera.

Unfortunately, and perhaps unsurprisingly, Verizon has loaded up the Droid Turbo with tons of crapware (I counted 18 preinstalled apps not from Motorola or Google). There’s everything from Verizon’s own messaging app, to NFL Mobile, to the carrier’s entirely redundant (and expensive) navigation app. The Turbo also comes with Amazon’s entire suite of apps preinstalled. You can disable pretty much all of these apps no one asked for, but it’s a chore to do so and really shouldn’t be necessary.

Do yourself a favor and get the Moto X instead

As is so often the case with steroid use, the unintended side effects outweigh the performance benefits they bring. And with the case of the Droid Turbo, you have to overlook a lot of things to justify its limited benefits over the less expensive Moto X, which are mostly just longer battery life and more consistent pictures.

The Turbo doesn’t have any tangible performance advantages over the X, and the compromises made in design and software aren’t worth the premium for most people. If battery life is your only concern (and you’re a Verizon customer), the Turbo is probably a better option for you than the X. But for the rest of us, the Turbo’s raw specs don’t make for a better overall experience than the Moto X — and that’s what you buy a phone for. Do yourself a favor and get the Moto X instead.