Top Shelf: Quantum of the Seas is the cruise ship of tomorrow

The two robots are perfectly efficient, fast bartenders. They always select the perfect amounts of Bulleit borboun, ice, and lime, and shake it just so before dumping it carefully into my plastic cup. They move in fluid, full gestures, almost as if they're human. (Their programmers studied an Italian dancer, strapping sensors to him as he moved and using his movements to teach the robots how to operate.) They pick from 127 bottles arrayed above them, and at one point, they stop pouring drinks and they dance.

Right now, though, they're broken. It's not even the robots' fault: a piece of the ice-maker broke and dumped a metal slab into the cup alongside the one part ice and three parts liquor. We'll be up and running again in a minute, I'm told, but for now the most futuristic bar on the open seas is closed. 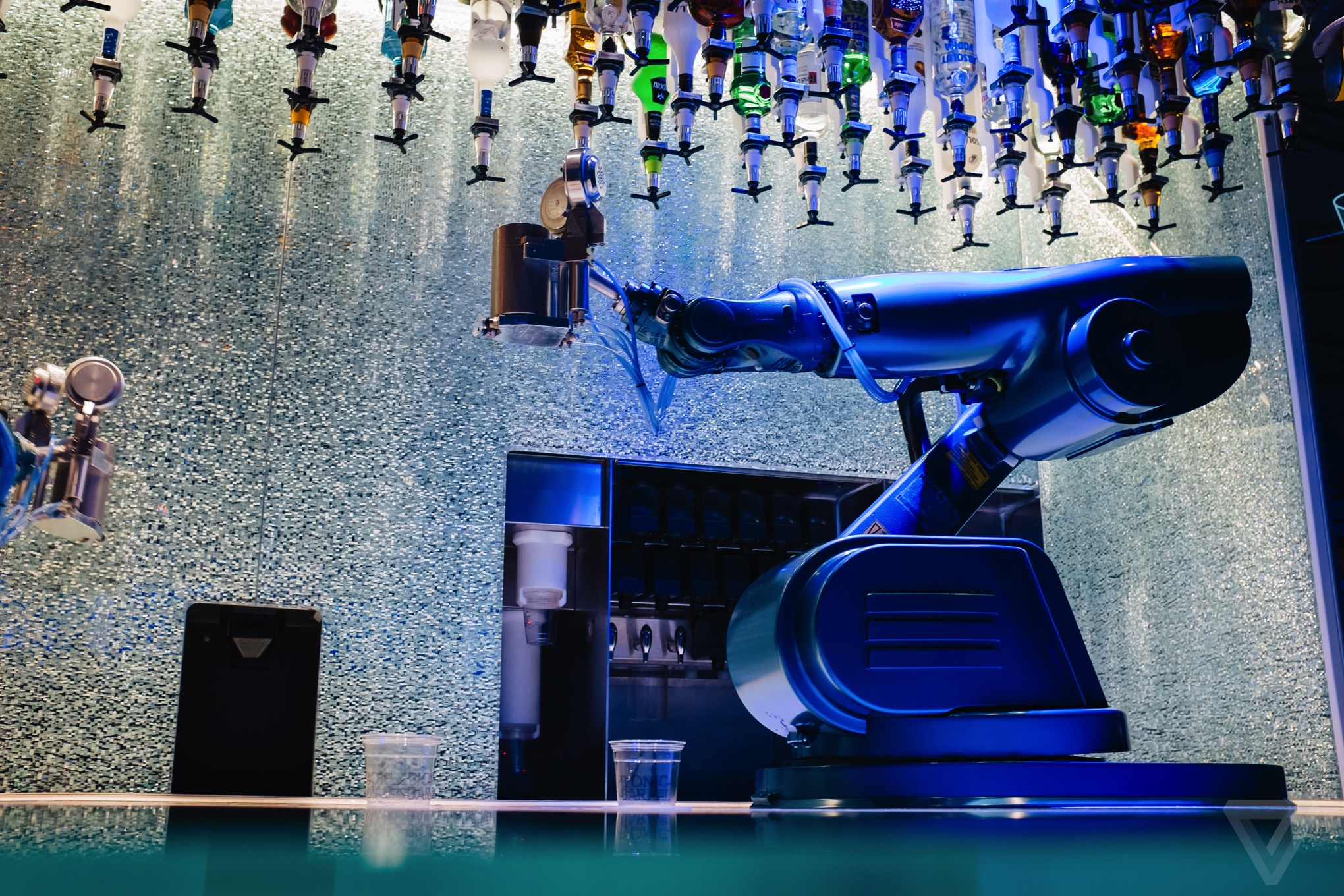 I'm standing in the Bionic Bar, on the fifth deck of the Quantum of the Seas. I've been on board Royal Caribbean's ultra-futuristic cruise ship for about 24 hours now, and I'm just starting to adjust to the constant rolling and pitching happening underneath my feet. (Technology apparently hasn't yet solved for constantly feeling like you're drunk as you walk around a gigantic ship and crash periodically into walls.) The Bionic Bar's centerpiece is the army of these bartenders, two car-manufacturing robots repurposed by a group at MIT to tend bar. The idea, I'm told, came out of a desire to explore digital intent and physical production; how do you turn something I create on a screen into a real thing, on demand, right here and right now? It didn't have to be a bartender, but of course it became a bartender. Everyone likes drinking.

Quantum of the Seas is full of things like the Bionic Bar. Things that Royal Caribbean did not because it had to, or because it saved or made lots of money (though the company certainly hopes to do plenty of both), but because it could. Because those things just seemed better, and because Quantum of the Seas is meant to be what the company calls "a before-and-after" ship. This is supposed to be the first of a new kind of ship, the one that resets the bar for everything that comes after it. With it, Royal Caribbean seeks a different kind of cruiser, a person who would never before have considered spending their week-long vacation on a boat.

On one hand, that's about making everything easier. You wear an NFC-enabled wristband that lets you into your room, lets you pay for drinks, and lets you book meals and entertainment just by tapping your wrist. You can check in before you ever get to the ship and track your luggage as it makes its journey to your room. Company CIO Bill Martin told me that Royal Caribbean never loses luggage, so it didn't need a system like this one – but waiting for luggage made customers nervous, and a tracker brings peace of mind. Oh, and there's Wi-Fi. More Wi-Fi than has ever existed on a cruise ship before, at a price anyone can afford. (Think $15 a day, not $1 a minute.) You can Instagram your cruise to your heart's content. 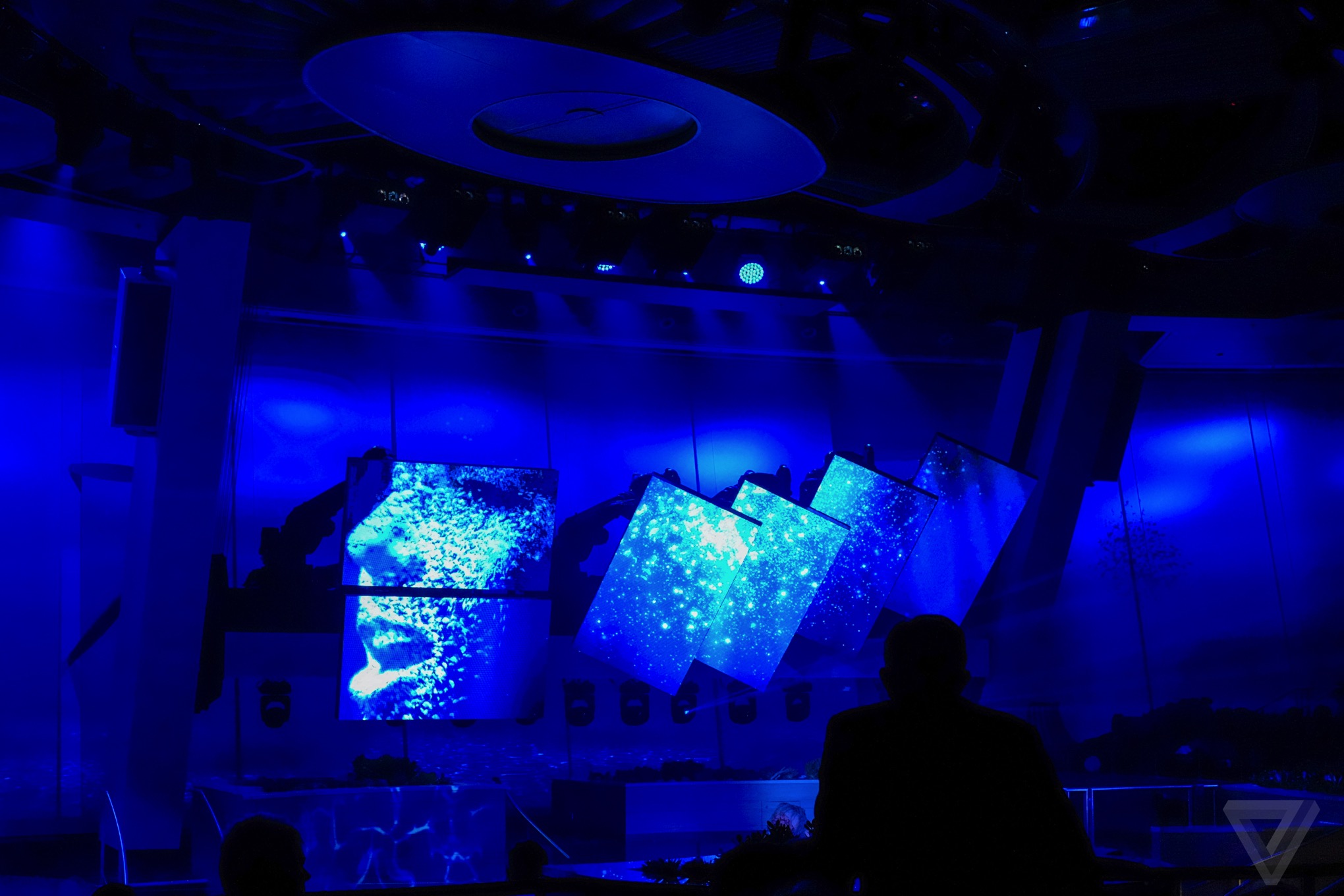 Then there are all the things for you to Instagram. There are bumper cars, trapezes, a skating rink, and a big magenta bear named Felicia. There's the North Star, which lifts you 300 feet above sea level to give you a view of the sea and the ship you've never seen before. It feels like a ride, like you're in the world's slowest rocket ship taking off from the open water. There's Two70, the shape-shifting "living room of the ship" that houses concerts and bars and a 12K screen lit up by 18 projectors. Rooms without real balconies get "virtual balconies," 80-inch screens hung vertically and fed a constant stream of footage from outside the ship.

And there's Ripcord, the skydiving simulator. That's where I found myself on a freezing cold Saturday afternoon, in a blue suit that made me feel like the frumpiest member of the Top Gun cast, with earplugs in and goggles on. I was the last of the dozen members of my group to fold my arms and trust-fall forward into the tunnel, where I was thrust upward by 75 miles per hour of constant wind. For 60 seconds, on the 15th deck of a 1,141-foot-long ship, I flew. My instructor, a 20-something guy named Ben with a heavy Scottish accent and altogether too little sympathy for the most worried of his students, made sure I didn't fly away. He directed me toward the camera, too — Quantum of the Seas is a ship made for taking pictures, and even when you're flying you'd better be selfie-ready. (I was not, not that it stopped anyone.)

Quantum of the Seas will open to the public in 2015 and will sail across the globe. It will connect a new generation of travelers to the cruise industry. It's still a cruise ship — there are only a few restaurants, only a few shows, and believe me when I say you never forget you're at sea — but it's a different kind of cruise ship and a different kind of cruise. A better one. How could it not be? It has skydiving.

This is North Star, which lifts its passengers 300 feet above sea level.
Most Popular
From our sponsor
Advertiser Content From