First-person shooters are notorious for the paper-thin motivations of their heroes — typically, muscular bald men who will execute an entire continent if someone puts their country in danger or stuffs their female colleague in a fridge. To step around the moral glue trap of a genre that relies on casual murder, many game developers quickly bury their excuse in a compact expository monologue, or they just make the villains Nazis or zombies. Because those, culturally speaking, are equally subhuman and okay for the killing.

In the latest Far Cry, a franchise set in exotic locations where you kill exotic cultures, dozens of hours of thrill-killing are justified by a comically grim internal logic: you wish to spread your dead mother’s ashes, showing respect to her final wish. Which is to say, you kill hundreds to show respect for one.

What makes Far Cry 4 unique is how the characters in the world itself seem to understand the real reason you’re here, the true motivation: you want to kill a lot of people for fun. Unlike Far Cry 3, the new game doesn’t bother with an explanation for why you’re so good at slaughtering humans by the village-full. It simply provides you the necessary materials, and dozens of missions and random moments to be a hero and shoot a man.

And yet, there’s a chance Far Cry 4 will be the game I recommend as my Game of the Year because its world is so grand and beautifully crafted, and I want to spend days floating through its sky, gliding across its rivers, and, yes, shooting countless humans and animals. Which is just so fucked up whenever I spend more than five seconds thinking about it. And I can’t stop thinking about it. 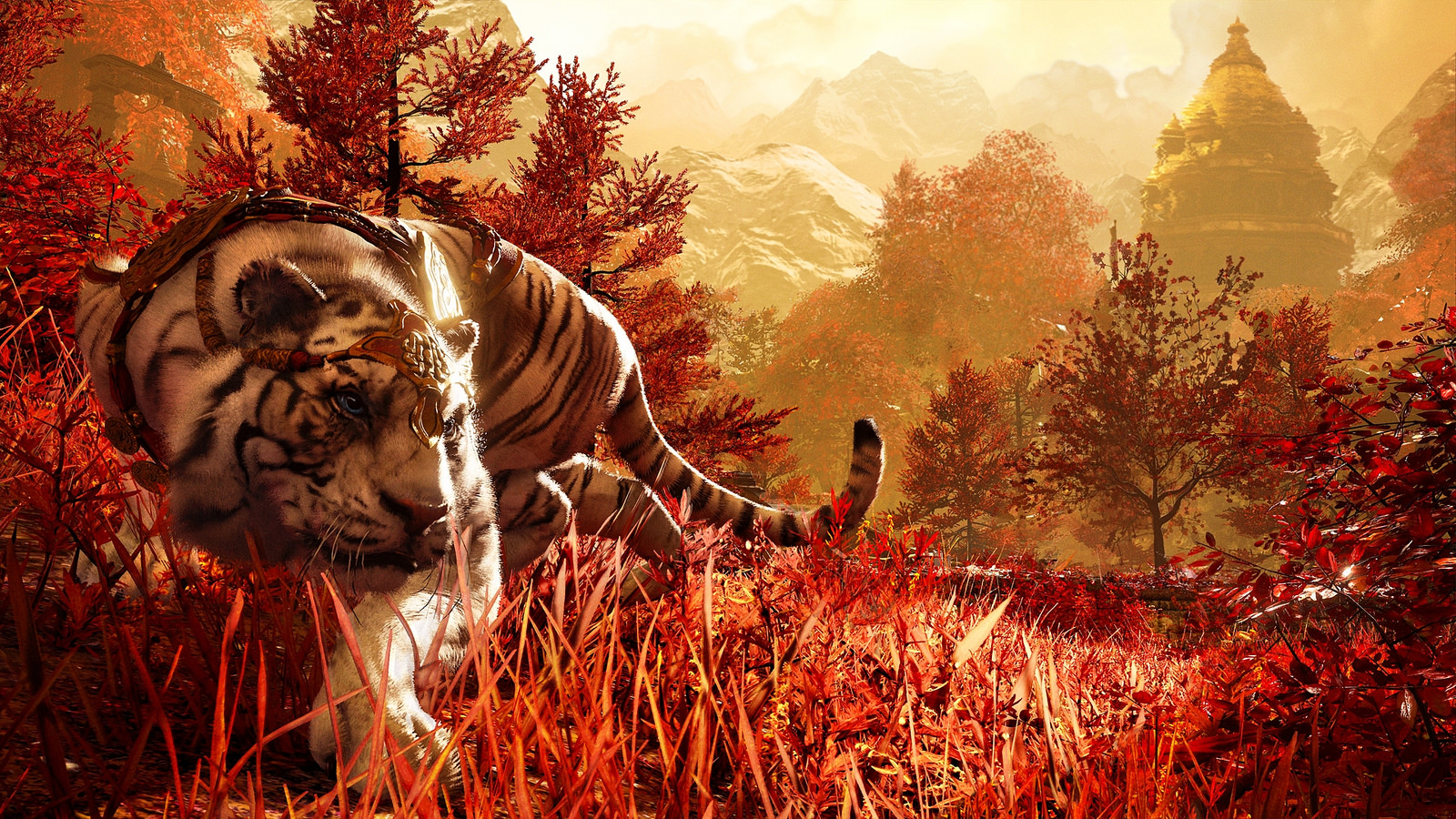 As an American named Ajay Ghale, you return to your presumed birthplace of Kyrat, a fictional stand-in for the nations of the Himalayas. The country — composed mostly of rich forests and mountains, spotted with temples, villages, and shrines — has been pulverized by decades of political unrest. In the place of an ancient age of posterity there is now a power vacuum waiting to be filled by one of a half dozen or so morally questionable women and men.

Far Cry 4’s warmest, most morally justified characters are still violent, selfish, and power-hungry, each of them drawn from the BioShock school of thought where all sides of an argument are equally bad, and there’s no real winning, just losing less. They’re shrewd parodies of philosophical ideals.

A franchise set in exotic locations where you kill exotic cultures

Everyone in this world lives to be judged: a pseudo-pastor obsessed with guns, as if they’re divine objects; a philosophical guru who wants to heal the land, but not before showing you a bloody animal sacrifice; the would-be empowered female heroine determined to save her country with an industrialized drug trade. No one can be trusted, screams the game with the caffeinated nihilism of Nietzsche lecturing at the X-Games.

Ajay, our voice in the game, takes a patronizing tone when he speaks to these people who provide him the guns, ammo, and reason to kill hundreds of people in an incredibly confusing civil war. He doesn’t ask for questions or details, nor does he make the obvious point that none of this has to do with his very simple desire to respect his dead mom. Occasionally, he scoffs at their requests and wacky logic. These people are crazy, he’ll say in so many words. Then he’ll reload his rocket launcher and shoot a helicopter out of the sky.

It’s hysterical, because despite Ajay’s scorn and snobbish tone, there’s a clear reason they’re coming to him: he’s a psychopath who can kill better than anyone else. 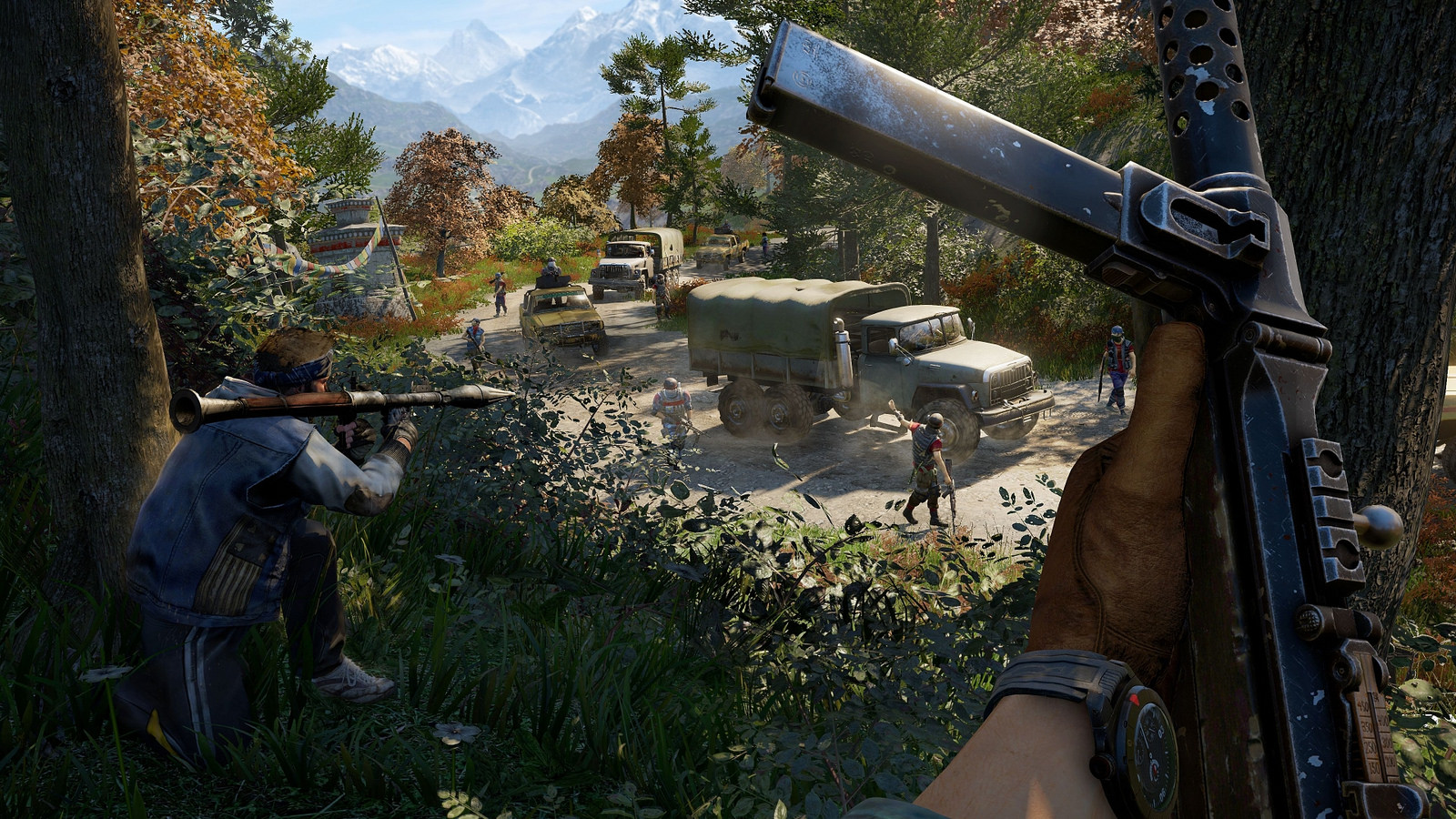 As the game progresses, it hints at details about Ajay’s personal life, but they’re mostly buried in bits of text, where a game puts something it doesn’t find interesting enough to tell you in its story. Ajay’s family drama takes a backseat to Ajay’s kicking ass and taking no names, because taking names would imply a fleck of humanity, of which Ajay has none. He was built to be boring, to get out of the player’s way.

One character in particular has really stuck with me as a weird inversion of Ajay. A powerful woman, you learn, is running a violent gladiatorial pit in which dozens if not hundreds of people and animals have died. Her motivation: the dwindling hope that she can save her parents who she believes have been taken captive. In an early scene, we see how heavy a burden this bloody job is on her sanity as she weeps and allows herself to be vulnerable.

I want to know what keeps me coming back

Ajay, ever the pragmatist, chides the woman. But her behavior — killing in the hope she’ll save the lives of her family — is far more justifiable than killing to scatter some ashes in the right spot. Of all the people in Kyrat, you are the quickest to kill in the coldest, most gruesome ways, but you have the flimsiest justification. That’s why you’re in the middle of this. It’s as if the characters know if you’re on their side, they’re guaranteed to win.

I’m beginning to get the sense that some people who make games about shooting people have anxiety about the very experience of playing them. And that this anxiety is expressing itself, intentionally or not, in the games’ characters and stories. Since Spec Ops: The Line, we’ve seen more and more narratives that can be reduced to, "The only way to win is to not play." From Grand Theft Auto V and The Last of Us to the Call of Duty franchise, you can assume one scene where the game forces you to do something particularly grim, tacitly implicating you as accessory in its bloody enterprise.

But I want to play. I love first-person shooters, despite my disgust with their jingoistic themes, their general support of unfettered militarism, and the obvious fact that you spend most of their campaigns trying to shoot people in the face so you can conserve enough ammo and shoot more people in the face. I just can’t stop playing them, and so I’ve become increasingly fascinated with their bizarre, interior logic that seems to hypnotize me into a state of comfort.

Simply, I want to know what keeps me coming back.

I’ve written about the shallow ultra violence of BioShock Infinite and the mind-numbing consistency of the Call of Duty franchise. But both have a blunt almost purposeful stupidity to them, clearly meant to feed a meathead market. Far Cry 4 is quite incredible in its gruesomeness, in that it seems both naively at peace with the paper-thin justification it gives the player to kill with such regularity, and yet also utterly exhausted with itself and violent video games. It’s as if the game was built by two teams on opposite sides of the planet, which, to be fair, it was in some degree, as the publisher Ubisoft is notorious for spreading development on its big budget titles across the globe.

Halfway through the game, a mission required me to kill a man who I later learned was a decoy. A voice came over the radio, trying to make me feel bad for killing the wrong man. Finally, the game was judging me, but I didn’t feel much of anything. What option did I have? All I could do was follow the script.