Okay Google, show me movies from 1999 that were shot on rainy Wednesdays

The story of the Google Nexus Player isn’t really about a set-top box. It’s about Google, about the fact that no tech company has yet figured out the perfect way to insert itself into the four-plus hours a day we spend watching television. It’s about Android TV, a new direction for Google’s phenomenally successful software that is made to work on any device with a screen. It’s about Google learning from its past mistakes, and meshing what it does best with what it’s never done well before. It’s about getting Google on input one.

Google already has its Trojan Horse in my living room, the $35 Chromecast that I bought on an Amazon whim and now use every day for streaming HBO, Netflix, and whatever dumb YouTube video my girlfriend needs to see. (Today: this one.) Now it’s trying to open up the gates.

A quick overview of how Android TV works

It’s now trite to refer to a set-top box as a "puck," so I won’t. The Nexus Player is a discus. It’s a flattened cannonball. It’s… a big black cookie. Whatever: it’s a puck. It’s a flat, round object about as big around as a coffee can (think more shuffleboard puck than hockey), with a notably larger footprint than the Apple TV. With power and HDMI cables connected to its rear, from a birds-eye view it looks a little like the Starship Enterprise.

Like virtually every other set-top box, it’s designed to be used and not seen, and it’s basically successful. It’s not nearly as unobtrusive as the Chromecast, which plugs directly into an HDMI port and is completely hidden, but it’s not nearly as obvious as my Kinect or even the thin layer of dust that covers my whole TV stand.

It's made to be used and not seen 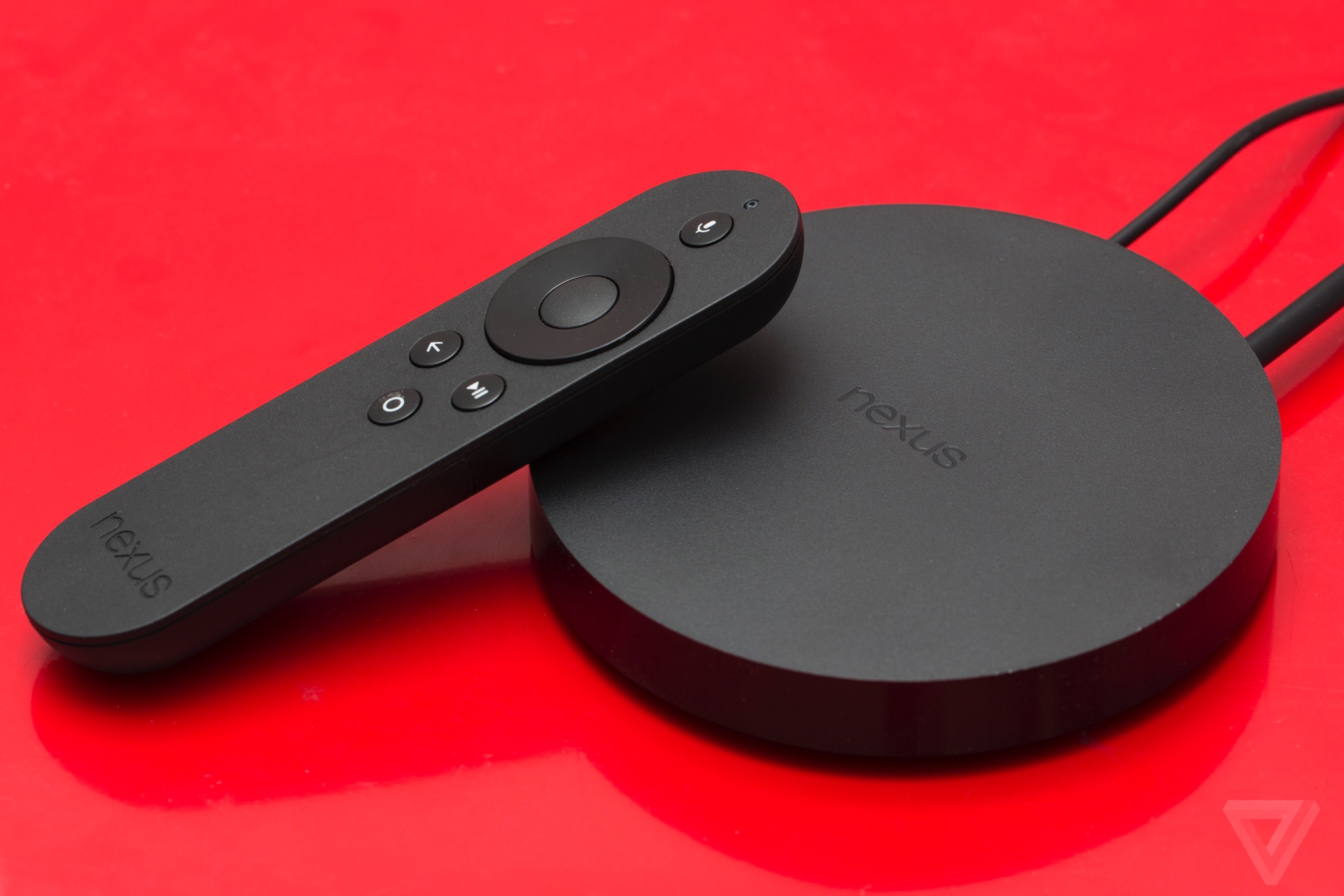 The included plastic remote connects via Bluetooth, so you don’t need a line of sight to the box to get it to work. If you’re somehow offended by the Player’s visage, you can hide it — so long as it’s connected to power and your TV, it can be anywhere.

Ultimately, that remote is a far more important piece of the set-top box equation than the box itself. So it’s a shame that the Nexus Player’s is a cheap, plastic toy of a clicker. There’s a five-way directional pad, a back button, a play / pause button, and a circle that I can’t imagine most people will ever figure out means "go home." All the buttons are plasticky and harsh, forever feeling as if they might crack on the next press. Even the textured remote itself feels cheap. Google basically made an uglier version of Apple’s ultra-simple remote, and a cheaper and less useful version of Amazon’s. And it takes AAA batteries. I hate using companion remote apps on my phone, but I’ll use Android TV’s a lot. 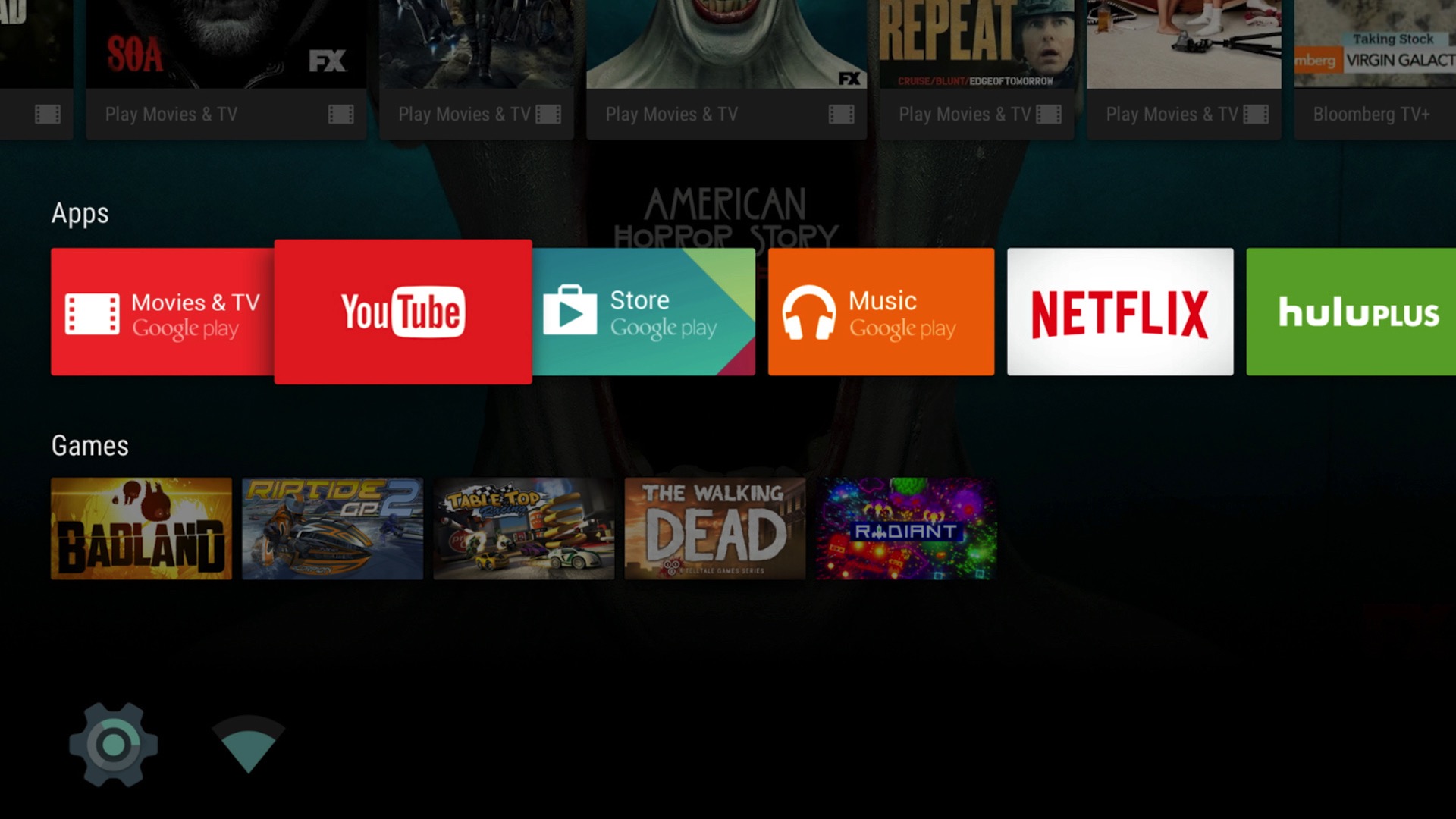 In all likelihood, the button you’ll use most on the Nexus Player is the one at the top, the one that activates Android TV’s Voice Search. This is the best feature of Android TV, that you can simply ask for whatever you want to see. That doesn’t just have to be movie titles, either: you can say "Oscar-winning movies from 1993" or "movies directed by Christopher Nolan starring Christian Bale" or "funny movies" and Google will always return… something. Sometimes it’s right, sometimes it is very much not so. For instance: 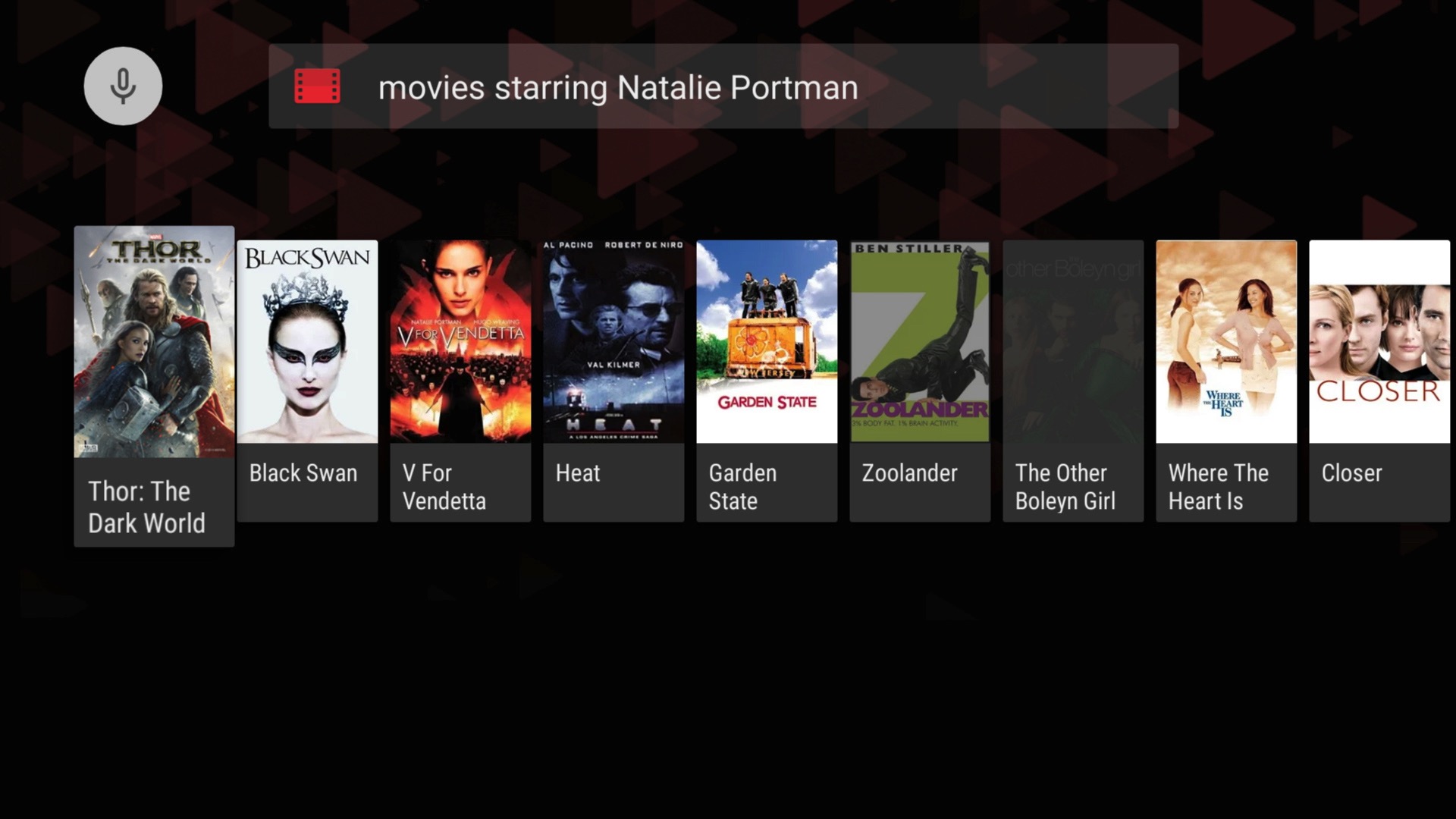 Quirks and confused ideas about comedy aside, voice search easily ranks among the Nexus Player’s best features. So does its basic interface, which is refreshingly attractive and intuitive next to the clunky text menus of the Apple TV or the many competing designs you’ll encounter on a Roku. The homescreen is made up of four rows, each scrolling left to right. At the top: a running chronological list of the things you’ve been watching. Below, a list of the apps you’ve installed, followed by the games you’ve installed, and finally two icons for changing settings. 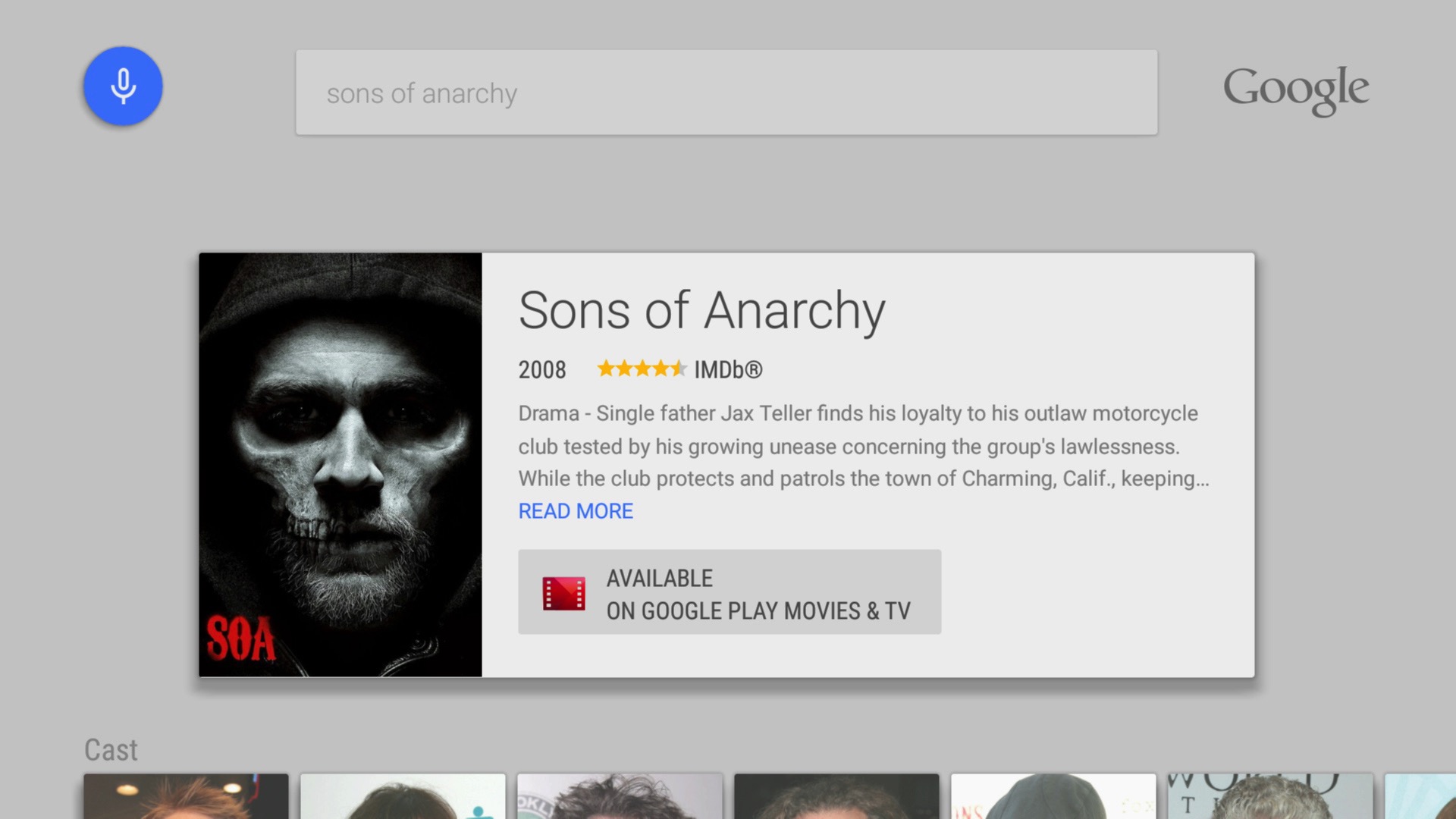 It’s all built on Android Lollipop and Google’s Material Design, the fictional element that warps and moves and animates as you move around. The content makes up the backgrounds and icons throughout the interface, and everything moves smoothly and cleanly as you navigate. It can be slow in spots, especially when there are a lot of thumbnails or photos to load, and there are certainly places where Google doesn’t take great advantage of screen real estate, but it’s a beautiful and intuitive interface that trumps just about any set-top box or smart TV on the planet.

This is an interface I wouldn't mind having on my TV

That said, Google has lots of work left to do. There are bugs with the recently-watched list, like the way it never shows me the YouTube video displayed on the icon — I always got a different video than I thought. There’s obviously plenty of tuning left to do in the voice search. I also really dislike that when you click the home button, the Android TV interface simply pops up over whatever you’re watching without pausing or stopping it. That might make sense with cable TV, like popping up the TV Guide over the game you’re watching, but it feels wrong when I’m watching Netflix or a rented movie.

The app and games lists on your homescreen are fairly straightforward, and neither is likely to ever get very cluttered. That’s because other than Google’s own apps (Play and YouTube) there are fewer than two dozen apps you can download onto the Nexus Player. Netflix and Hulu and Crackle are here, as is Pandora and iHeartRadio, but there’s also one for Dramafever and HaystackTV and HGTV. There’s no Amazon, no HBO Go, no Spotify, no WatchESPN. Many of those will surely come to Android TV — they’re all available on Android, and the whole point of Android TV is to make it trivially easy for developers to support every screen size including this one — but they’re not here yet. After about an hour, you get the sense that you’ve done everything there is to do on the Nexus Player. 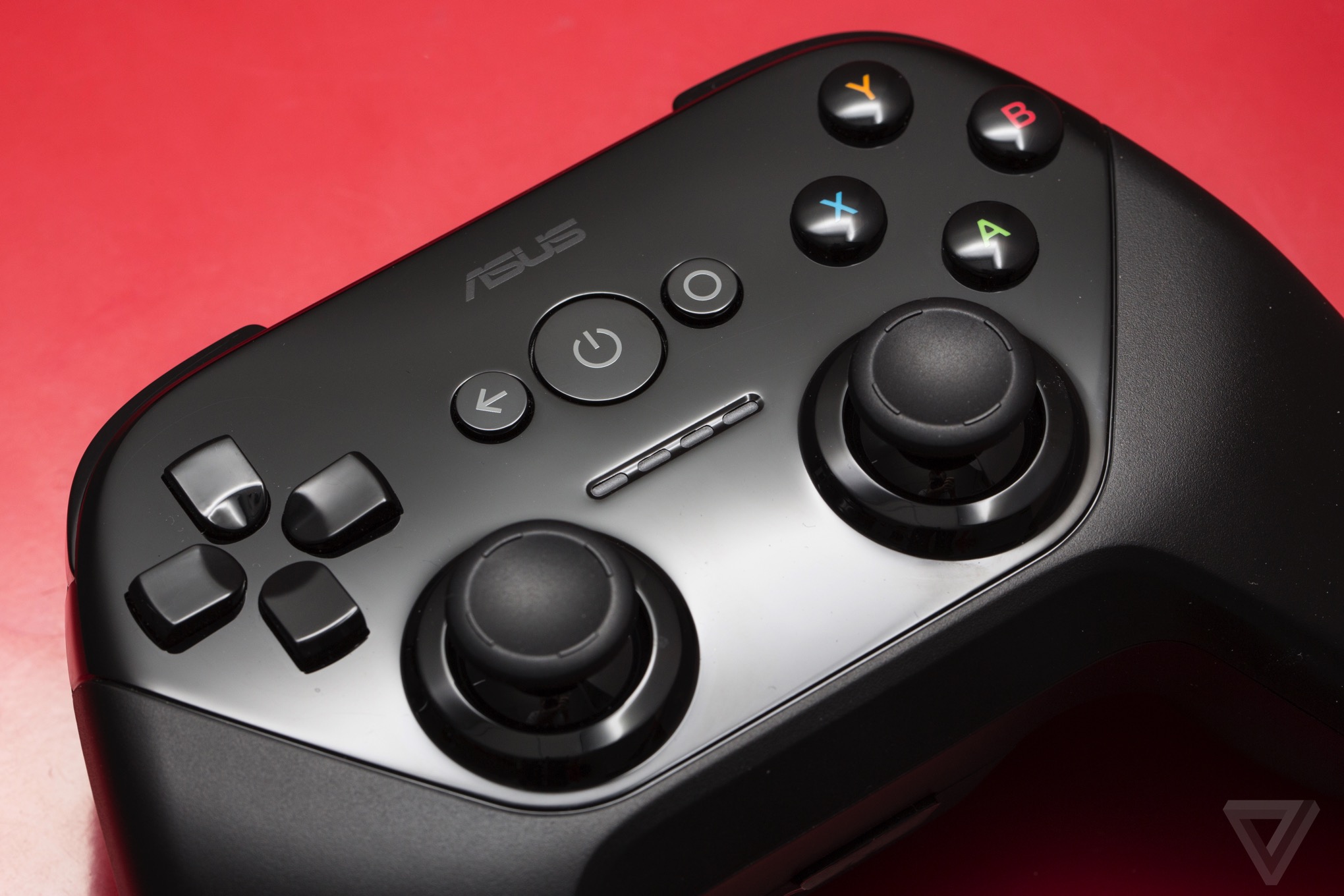 Just being present won’t be enough for these apps, though, at least not if Android TV wants to be great. There are plenty of ways for developers to treat TV as more than just another screen size. They can integrate into the voice search: Google hopes you’ll be able to search for a movie and then see all of the places you can buy, rent, or stream it. (Roku and Amazon both offer something similar.) They’ll be able to tap into the cards Google displays in each title, with information about the production and people in it; the cards even work with scenes and shots in movies, the way X-Ray shows you more information any time you hit pause on Amazon’s Fire TV.

The same goes for games, which Google clearly deems important to Android TV. It even sells a full gamepad controller, for $39.99, that lets you play much more complicated games than the up-left-down-down-click kinds of motions you can do on the remote itself. Even complicated and intensive games work well on the Nexus Player, and I quite like the controller, but there simply aren’t many to play.

Not that there’s much room anyway. There’s only 8GB of internal storage in the Asus-made box, which doesn’t matter much for watching movies since you’ll almost certainly be streaming rather than downloading, but it feels paltry when there are already a few games in the store over 1GB. There’s a USB port on the back, but it’s just USB 2.0, and connecting a hard drive to the Nexus Player hardly seems ideal anyway. 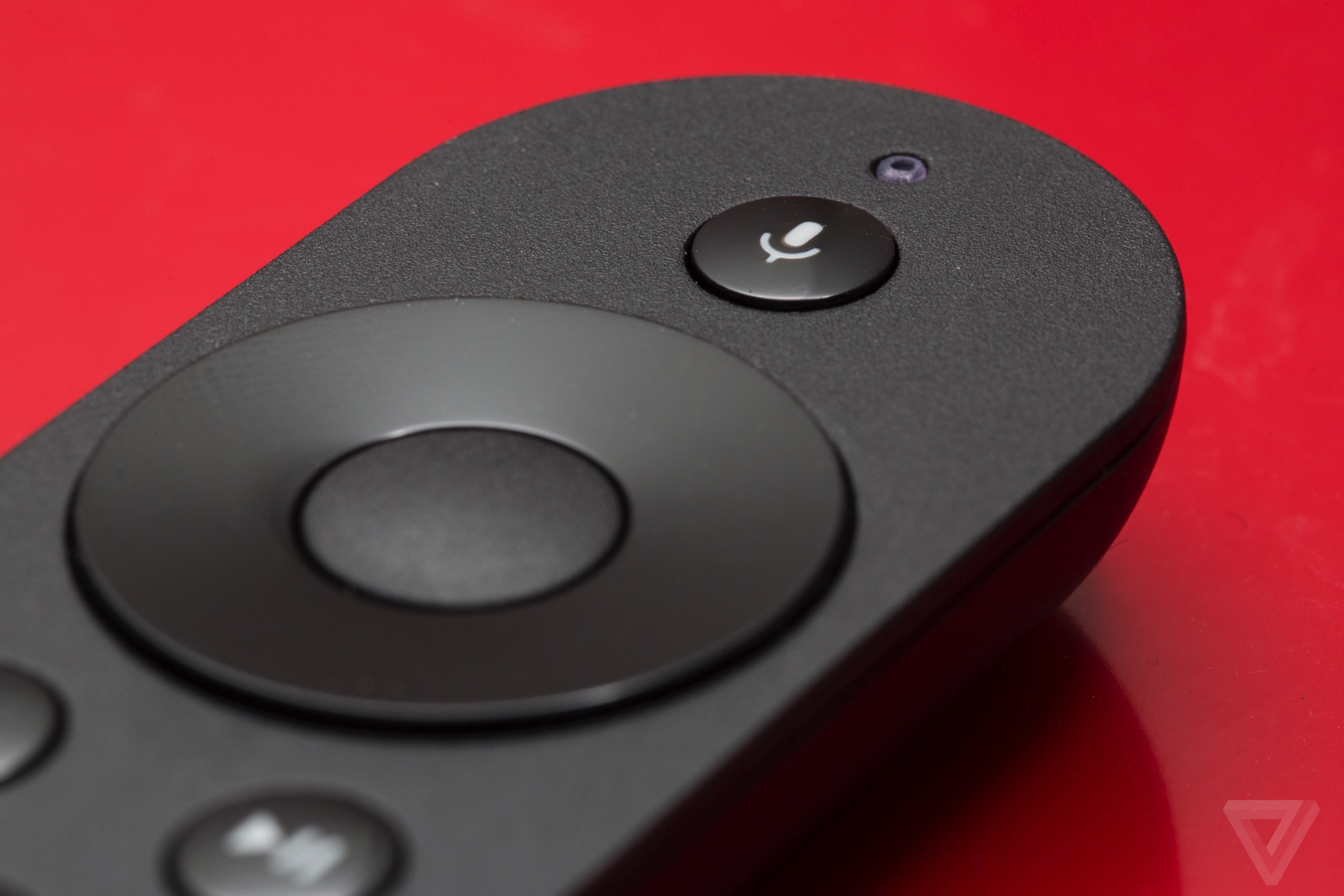 The Nexus Player’s saving grace, though, is that it’s a Chromecast. That means all the apps that let you use your phone or tablet to stream video to your TV, or even mirror a browser tab, also work on the Nexus Player. That’s how I’ve been watching Eastbound and Down, and how I cope without a Spotify app. Of course, the Nexus Player is $64 more expensive than the Chromecast and works exactly as well and no better, so there’s not much of a case for upgrading right now.

That, actually, is the story of the Nexus Player. It’s a glimpse at a different, more palatable future than Google TV ever offered. It may maybe even the actual future — Sony and Sharp are already signed on to make Android TV their smart TV platform — but it’s not a terribly compelling purchase right now. Google’s plan is to marry the power and flexibility of Chromecast with the communal, lean-back experience of flipping through Netflix genres on your TV. The bones of that are here. Now Google needs more: more content, more games, more apps, more everything. The Roku 3’s content selection simply embarrasses the Nexus Player (it even has Google Play now), Amazon’s voice search is superior and its interface is much faster, and the Chromecast offers virtually all of this functionality for a third of the price.

It's hard for a set-top box to stand out, and the Player doesn't

I have no trouble imagining the day, a few years from now, where I turn on my TV and am greeted by this colorfully tiled interface. It’s certainly an improvement on the heinous, ad-riddled messes we allow on input one today. But the TV is a difficult code to crack: we do a million different things when we’re in front of the TV, and we do it a million different ways. Google needs to build software that is at once powerful and simple, customizable and intuitive, that can work for anyone in any situation on any device and any screen size.

That’s hard. It’s proven all but impossible in the living room. But the good news for Google is that it made software like that already. It’s called Android, and it dominates the smartphone industry all over the world. All Google has to do now is think a little bigger.