But don't expect much from those cameras

Share All sharing options for: HTC's Desire Eye is a killer mid-range smartphone

HTC’s marketing its new phone all wrong. The newly launched Desire Eye — available exclusively on AT&T in the US — is being positioned as the ultimate selfie phone. In reality, the pictures you’ll get from it are just okay. But everything else about the Desire Eye is pretty fantastic. In HTC’s lineup, the Desire Eye sits beneath the flagship One M8. But in many ways, it’s a better buy for plenty of people.

As with any HTC phone, the first thing you'll notice is design. Critically, HTC hasn't tried to recreate the One M8 here, as it did with the uninspired One E8. The unit I've been using is white with a maroon red band running around the frame. It looks great, and everyone who held it immediately had nice things to say about the design. No, it's not metal, but in many ways the soft touch finish makes the Desire Eye easier to hold — and lessens the odds that you'll be dropping it onto pavement. Up front, the white bezels are matte, which creates a nice contrast against the glossy screen. HTC's signature BoomSound speakers are here, though audio isn't quite as powerful as what the M8 puts out. They're almost impossible to spot thanks to some pretty clever engineering work.

A huge plus that comes with the Desire Eye’s design is that it’s waterproof. IPX7 water resistant, to be specific. The phone can take a swim in 1 meter of water for up to 30 minutes and come out totally unscathed. We never recommend taking those claims to the extreme, but you can use the Desire Eye in an unexpected downpour without any worry whatsoever. That’s a great feeling, and it’s one that iPhone users still haven’t experienced. Samsung has also steered away from waterproofing with its most recent devices like the Note 4. But if you’re buying HTC’s "mid-range" phone, you’re getting a phone that can withstand the elements better than the One M8.

A 'mid-range' phone that sacrifices little

Looking deeper, the Desire Eye packs all of the M8’s power — a quad-core Snapdragon processor, 2GB of RAM, and a gorgeous 5.2-inch 1080p screen — into that plastic shell. The display is particularly impressive, with wide viewing angles and vivid colors. The Desire Eye ships with 16GB of flash storage, but you're not handcuffed to that; there's a microSD slot that takes cards up to 128GB in size. Opening it can be an exercise in frustration though, since it's tightly sealed due to the waterproofing. Same goes for getting into the SIM tray. We can't yet speak to battery life, but you should expect it to fall somewhere in the vicinity of the One M8. (The Desire Eye has a 2,400mAh battery versus the One M8's 2,600mAh capacity.)

As for software, there are really no surprises to be found. The Desire Eye runs Sense 6.0 overtop Android 4.4.4. And here again is where it leaps out ahead of HTC’s last plastic phone. Unlike the One E8, the Desire Eye makes no sacrifices in terms of performance and speed. This thing absolutely screams. It handled just about everything I threw its way without a stutter or noticeable pause. AT&T has loaded the Desire Eye with tons of bloat. Thankfully almost all of those apps can be disabled so they won't clutter up your app drawer. HTC signatures like BlinkFeed and Zoe are also here, with the latter now broken out as a standalone app. 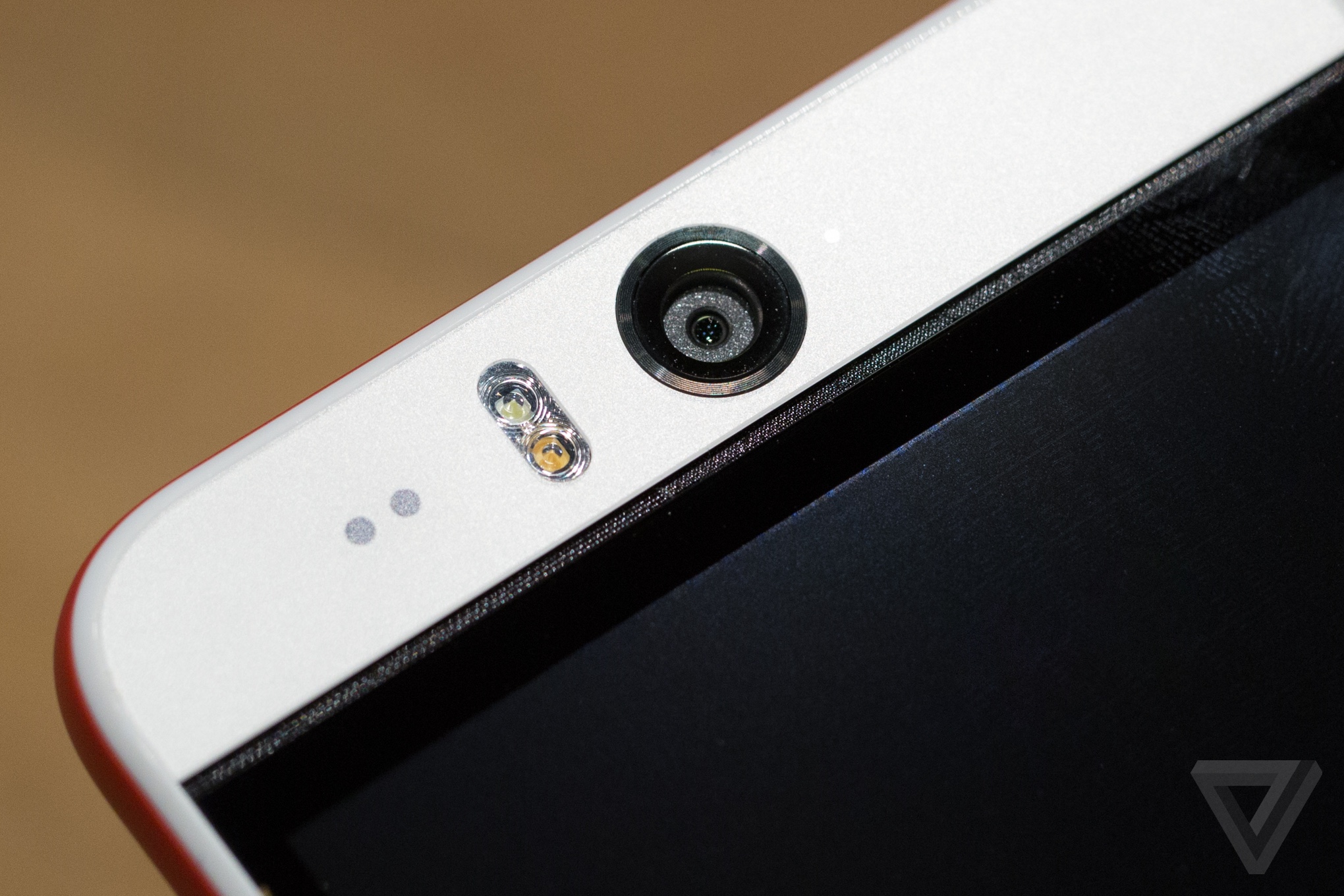 So that leads us to the cameras. HTC has crammed nearly identical 13-megapixel cameras into the front and rear sides of its Desire Eye. They're very similar to what shipped inside the One E8, and both move away from HTC's UltraPixels approach. There's also no Duo Camera here for sensing depth, so don't expect to refocus shots after the fact. No big loss. That's a gimmick we're fine living without. It's impossible to miss the front-facing camera. Really, it's so big that it sometimes proved distracting and pulled my eyes away from the screen.

Unfortunately, size has no bearing on quality, and these cameras just aren't worth much praise. They'll do fine in strong daylight — just like most smartphones these days. That's bare minimum. But in more unfriendly environments, the results are often muddled and lack fine detail.

I didn't get a ton of time to test out the Desire Eye, so I got caught taking most of these shots on a rainy day. That obviously didn't do the camera any favors, but my iPhone 6 Plus still took better shots in every instance. And that's a shame, since HTC's manual controls are probably the best I've seen on Android; the options for tuning your shot are endless. The camera is also lighting fast when capturing images. So there's no shutter lag and the software's there, but none of it matters when HTC's hardware rarely delivers anything more than average results. And no, your selfies won't look discernibly better with all those extra megapixels. 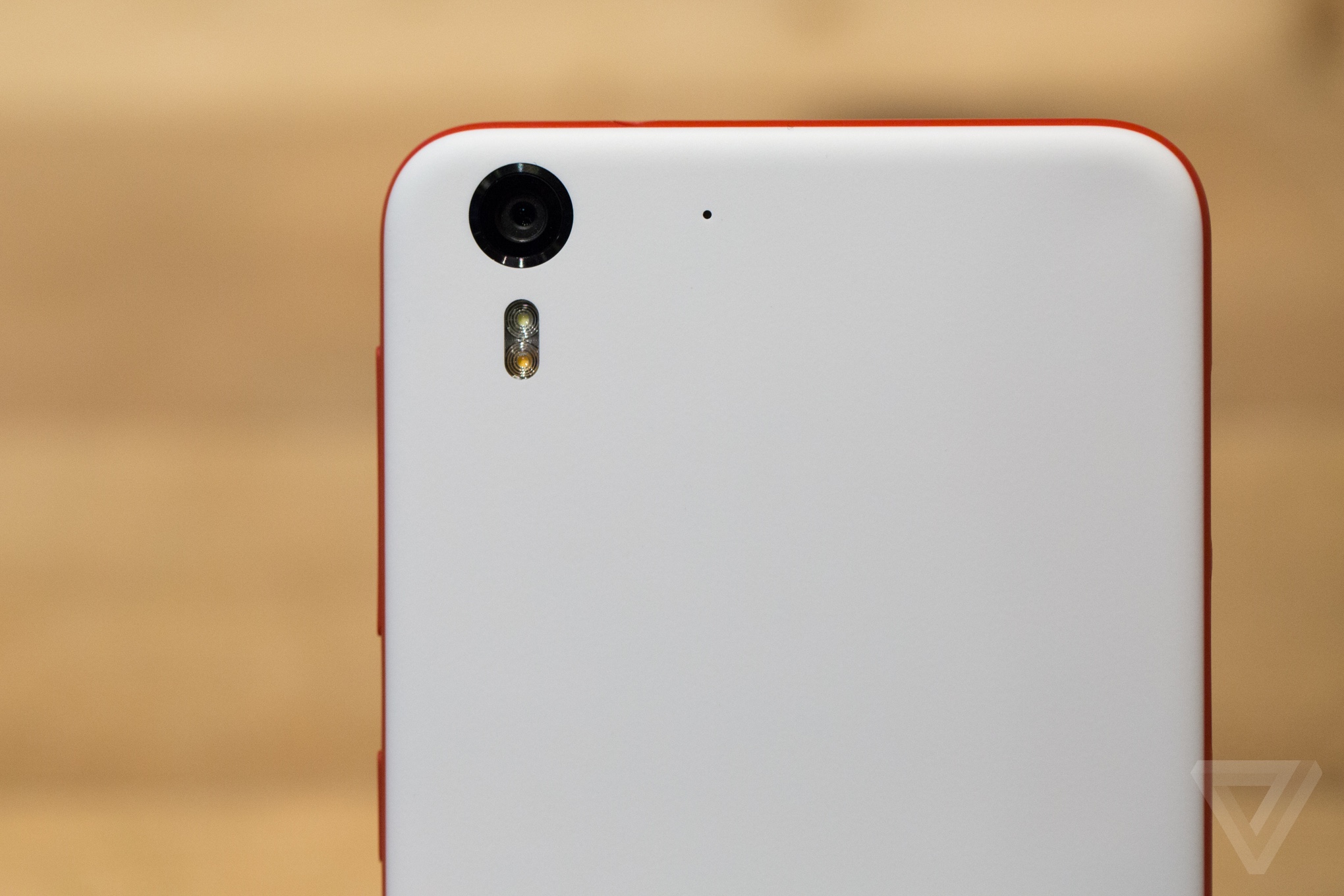 So don't buy the HTC Desire Eye for its cameras. They're fairly run of the mill. But there are plenty of other things to like about this phone. It's got a great, waterproof design. I've got zero complaints about the crisp, vivid 1080p display. HTC's Sense software is fast, light, and rarely gets in the way. And above all else, this is a "mid-range" phone with specs that make it plenty capable for almost all needs. For an on-contract price of $149.99 ($550 unsubsidized), that's not terrible.

Your selfies will still look fine once they're uploaded to Facebook anyway.

Scroll down to see photos taken with the HTC Desire Eye's front and rear cameras.

Save $20 on several Pokémon games for Nintendo Switch