Track all of your home's energy hogs with this $249 box

Track all of your home's energy hogs with this $249 box

Energy use is one big, nebulous thing that most people get in the form of a bill at the end of the month. You might have an idea of what appliances cost to run, including things like heat and air conditioning, which can make your bill go sky high if you leave them on all the time. But everything else in your house can be a big mystery, which is something a company called Smappee is trying to solve. It's designed a $249 device that clamps into your fuse box and will attempt to itemize each and every appliance, set of lights, and even things like a vacuum cleaner, giving you an idea of what's using energy in real time.

The box went on sale in Belgium and the Netherlands late last year and expanded to most of Europe and the UK this summer. Today the company's releasing a version for the US, with the hopes of eventually getting utilities companies and solar power installers to help sell it to customers as a way to track what energy is being used.

Most appliances have an electronic signature

Perhaps the most noteworthy part of Smappee is how it works. Unlike a smart meter from your utility, which is reading the entire flow of energy at the curb, Smappee does it from inside your home using a small clamp that goes around your breaker box wiring and measures the current through a magnetic field (competing products from Energy Inc. and Powerhouse Dynamics do that too). Not all electronics and appliances are the same, so the system is able to identify when anything, or at least most of the electronics you use, turns on by its unique electronic signature.

Each time an appliance turns on or off, you can see it in real time in Smappee's app. The system also groups together types of activity, including the amount of electricity you're always using, and how much you're consuming when certain things are on. The system's even been set up to give you an alert when something gets turned on or off, a feature Smappee's CEO Stefan Grosjean says can be used to set up simple alerts for things like your garage door, coffeemaker, and motion-activated flood lights. 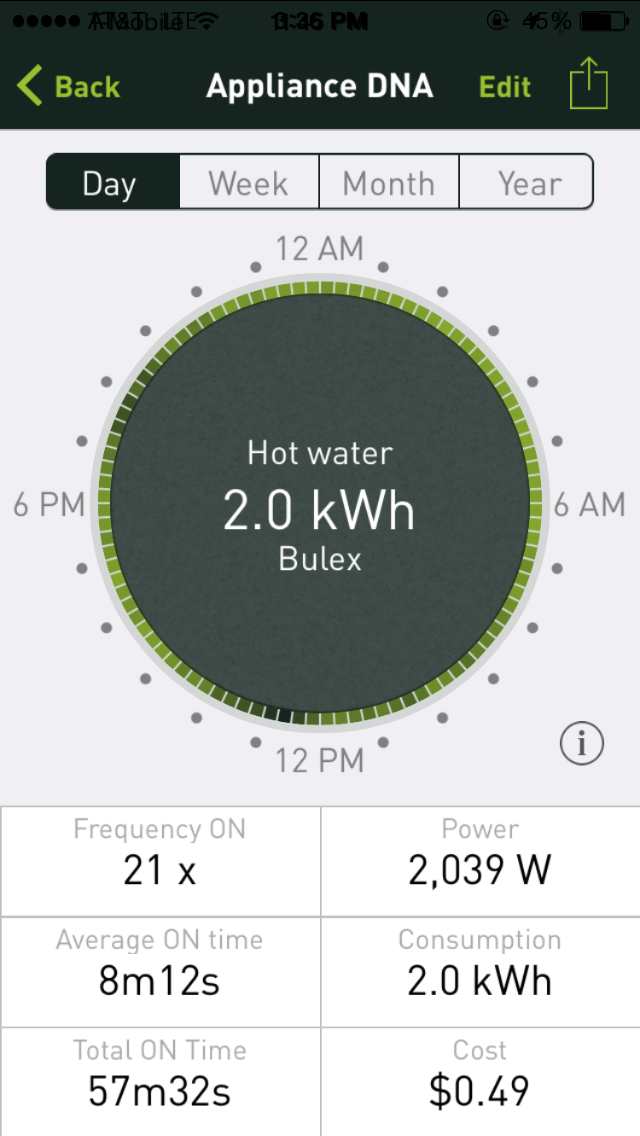 "Once you start seeing what each item is doing, you become an energy manager," Grosjean says. "Without even realizing, you start thinking ‘why is the TV using that amount of energy?'"

Grosjean's previous work involved installing similar systems inside of commercial spaces to provide analytics for companies like Walmart. Instead of doing it at the main power source, that project involved adding sub-meters and even metered power outlets to specific departments, something that's possible but extremely expensive to do in homes, says Smappee's business development manager Richard Morgan.

The big difference is that the kind of system that's tracking every plug is extremely accurate, whereas Smappee leaves a little wiggle room for the precise number of devices using electricity. Grosjean says the system will pick out about 80 percent of a person's appliances, but cannot identify anything that uses less than 40 watts. That means something like a TV or a refrigerator is pretty simple, but your phone charger is basically invisible. You also need to train it to recognize each and every device by its energy signature. When something pops on for the first time, you have to name it. It won't guess for you, but Grosjean says the company is building up a database of devices so that it can begin to autocomplete product names for you, and speed up that process.

"The principle we have is a bit like Shazam."

The other 20 percent of mysterious activity is still an issue though, something Grosjean acknowledges. The system also has trouble when multiple things turn on simultaneously. "We won't find 100 percent, we'll find the big energy guzzlers," he says. "The principle we have is a bit like Shazam. If there's a lot of other music around, it will mix it up ... we always have something like 5-10 appliances on all the time, so the difficulty for us is to make a combination of songs, to say ‘okay, if I were to combine those music, those things does it match?' And sometimes we're in trouble."

Beyond energy tracking, Smappee includes a plug that lets you remotely trigger its power on or off. It's controlled through Smappee's base station using the 4.33GHz band. That connection can be toggled manually or by setting up rules to do things like turn off your home entertainment system's power strip when you leave a geofence around your home. You can buy more of these in packs of three for $40, which is less than many standalone remote-controlled plugs.

What took so long? There's been tweaking

So what took the company more than a year to bring this over to the US? Grosjean says it was basically beta testing when it did its limited European launch, and ended up fine tuning things over the past year. "It's one thing in the lab, but in real life it's very different," he says. "We found a lot of difficulties, which we've overcome." When it first launched, for instance, the range of the Wi-Fi was poor, something Grosjean says has been improved with software updates. That extra time has also given the company time to fine-tune its integrations with If This Then That, and to do programming beyond its own app's capabilities, like turning your Phillips Hue lights a certain color when your coffeemaker turns on.

Next on that list are things like support for Apple's HomeKit, and potentially premium services that people can pay for to help keep an eye on their home, like if your refrigerator breaks and leaves a puddle of thawed ice buildup all over your kitchen. But by then, Grosjean jokes, you might have already used Smappee to realize you need a newer, more efficient model.