Smartwatches have a pretty bad reputation for being ugly, mini computers that prioritize function far above form. Much of that criticism is deserved — just look at the first two Android Wear watches released this summer. There have been a few bright spots in the otherwise dreary world of smartwatch design (Pebble’s Steel and Motorola’s Moto 360 come to mind), but if you care about how your watch looks, you’re probably not wearing a smartwatch.

That’s why I’m excited about Asus’ ZenWatch. The $199.99 Android Wear-powered watch has a slim stainless steel design complemented by a nice brown leather strap, complete with a fancy metal clasp. Asus talks more about the ZenWatch’s heart tracking, and the mood-measurement features that inspired its name, but I don’t really care about any of that. This looks like a watch I actually want to wear, regardless of its features.

Of course, the reason you buy a smartwatch instead of a traditional watch is for what it does, so good looks alone won’t cut it in this world. A smartwatch needs to do a number of things to earn its title: provide quick access to notifications, tell the time, and last through the entire day without needing to be recharged (at the bare minimum), among other things. You can choose from any number of smartwatches to do those things, but if you want something that looks good on your wrist at the same time, you’re going to want to check out the ZenWatch. 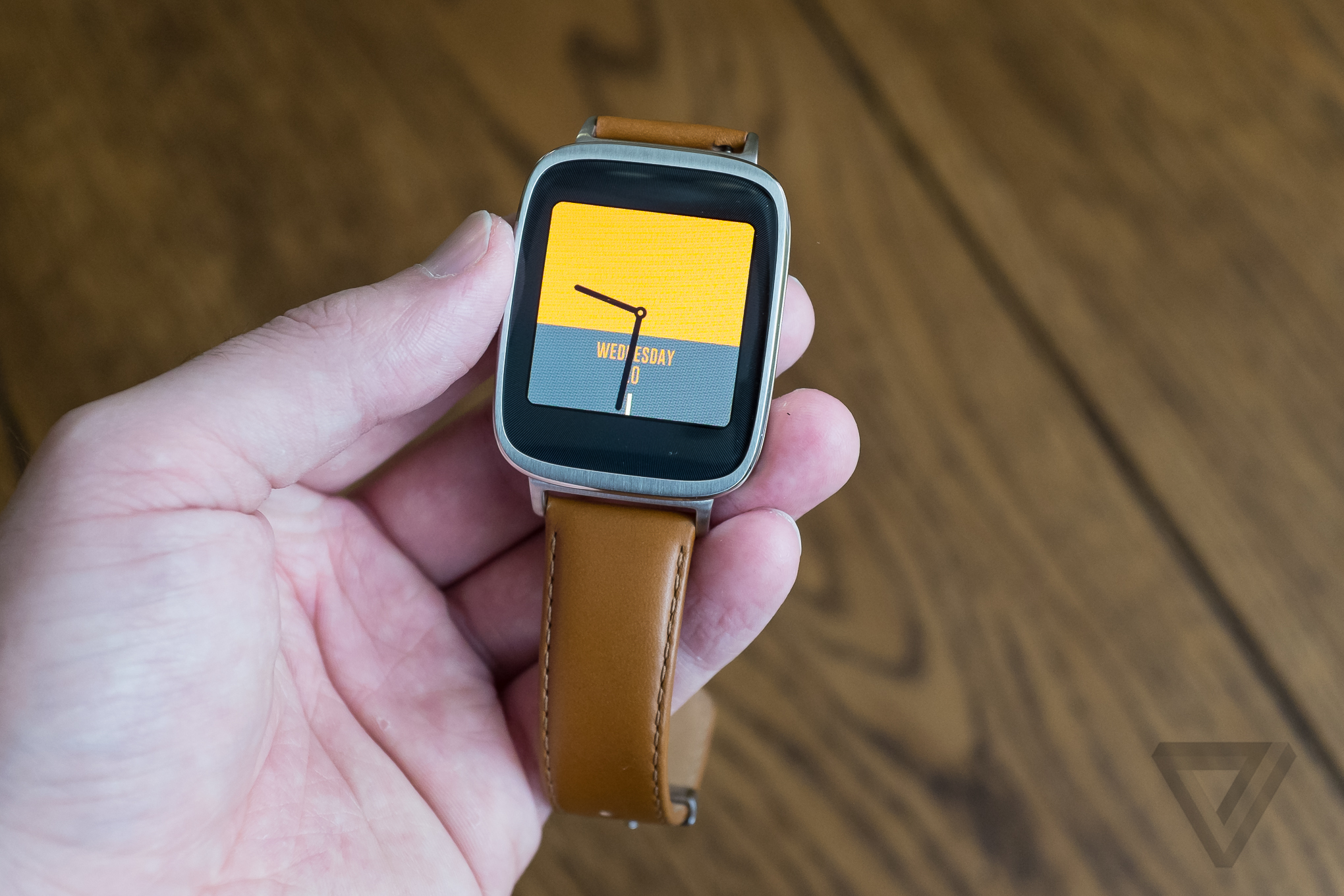 Survey the field of Android Wear watches available right now, and you’ll see a lot of plastic and a lot of rubber. The ZenWatch is refreshingly devoid of either of those materials. It has an attractive brushed stainless steel body with a copper-colored band (Asus calls it "rose gold", but it’s more like copper to my eyes) sandwiched between the two layers of plain steel. It’s a good look that works with both casual and formal attire, which is a rarity in a sea of mostly dorky-looking smartwatches. The ZenWatch’s design reminds me more of Apple’s upcoming Watch than prior Android Wear watches. 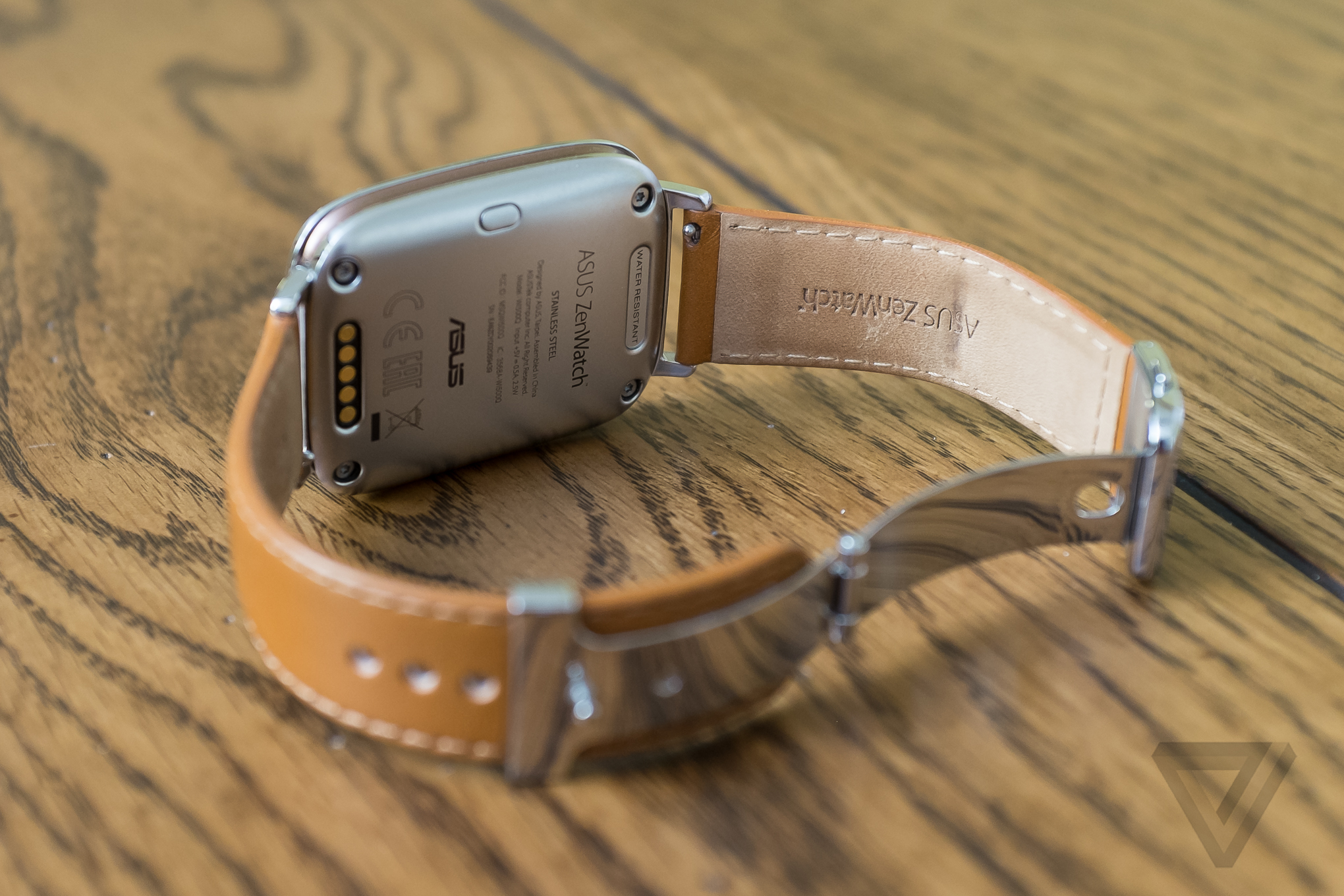 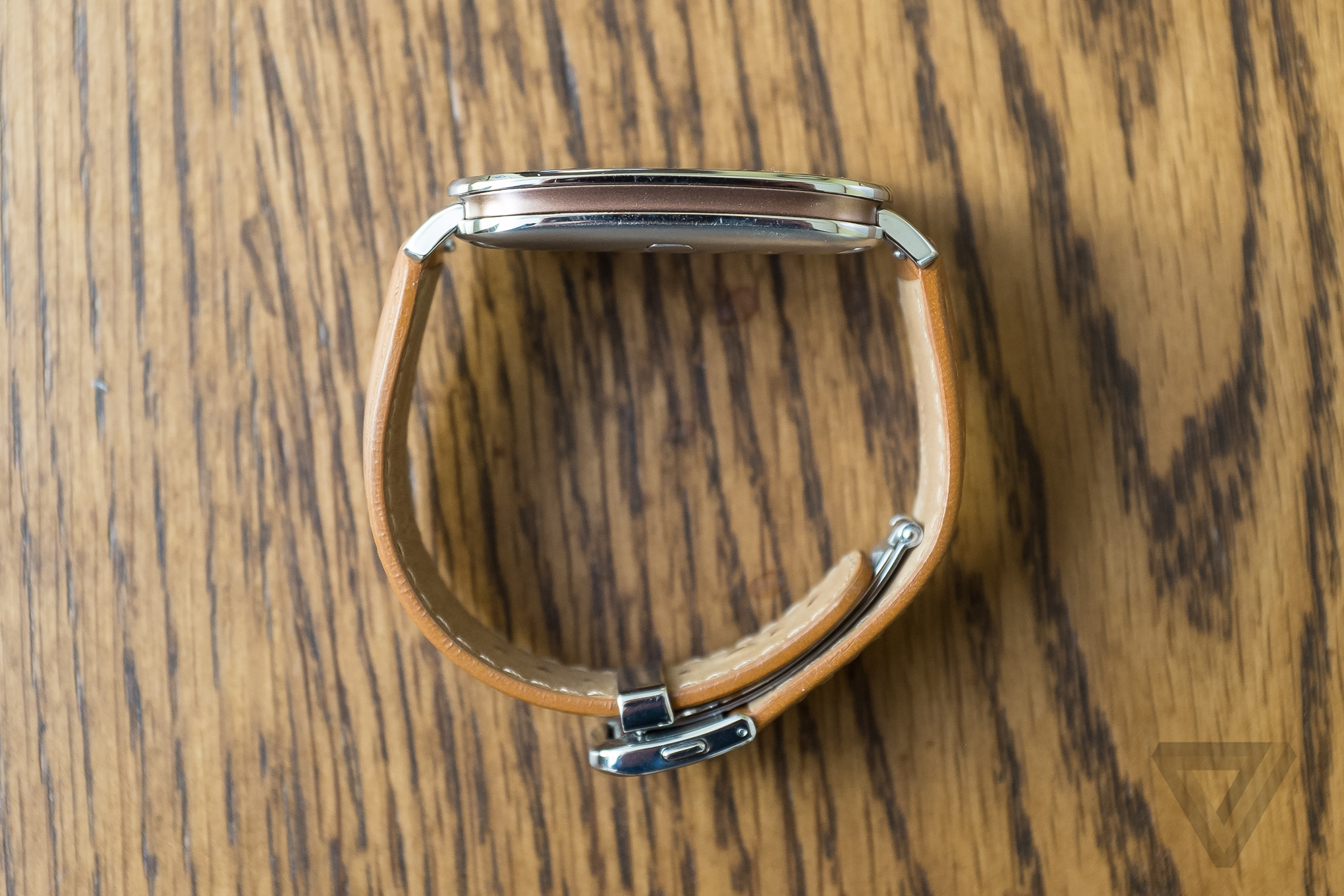 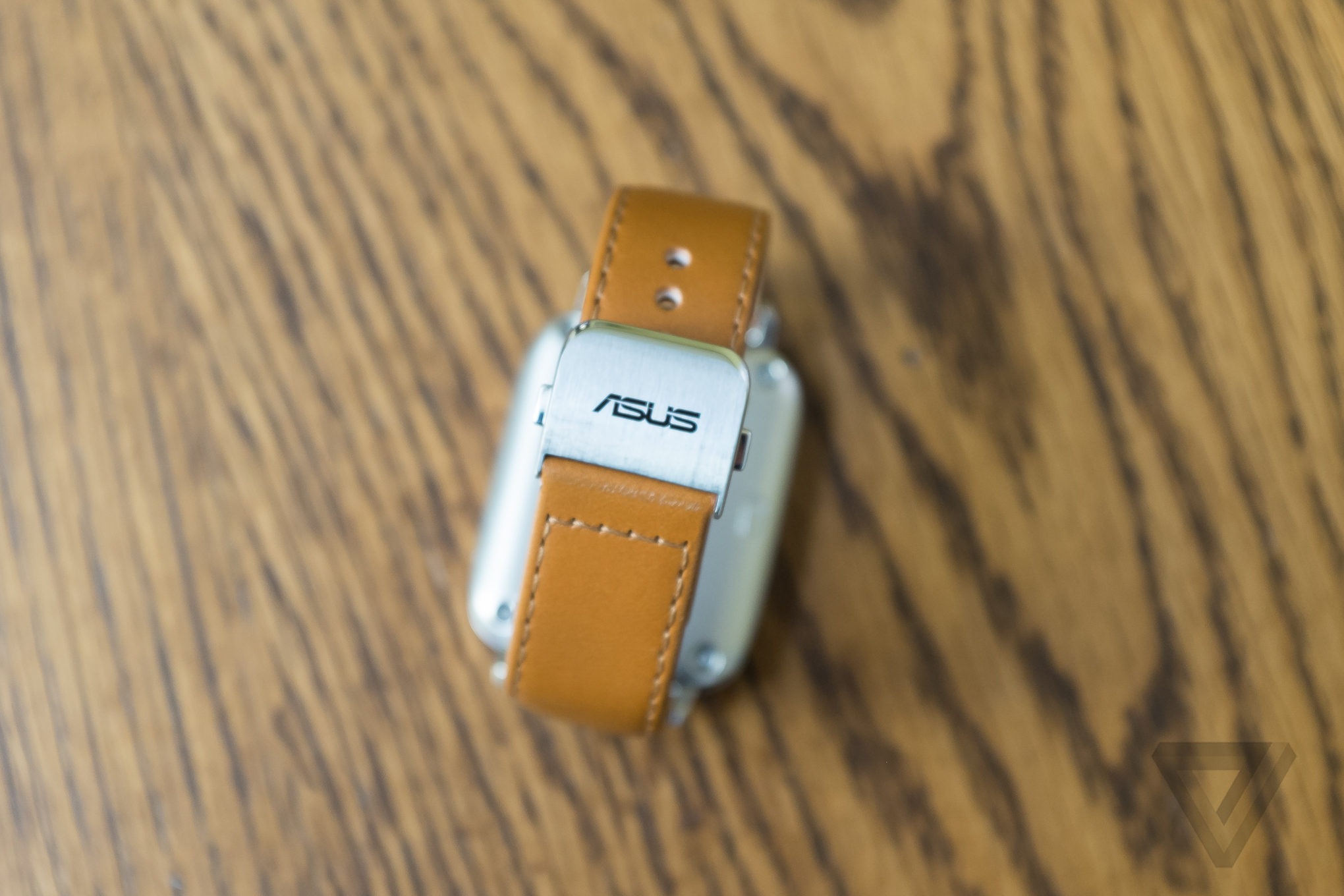 The watch itself is thinner than most other smartwatches, and though the ZenWatch is bigger overall than the Pebble Steel, it’s not uncomfortably big on my wrist, unlike the rather bulky Moto 360. It’s still closer in size to a large men’s watch than a unisex design, so those with smaller wrists might still find it too large.

Like the Samsung Gear Live and LG G Watch, the ZenWatch has a square display. But the frame around the display is judiciously rounded, and the top even has a slight curve to it, softening the watch’s appearance. The screen is a 1.63-inch, 320 x 320 pixel AMOLED panel, with good viewing angles and acceptable brightness levels. It’s similar to the Samsung Gear Live’s screen, but works better outdoors. My only real complaint with the ZenWatch’s design is that the border surrounding the screen is a bit too large. I wish Asus either made the display larger or the watch smaller to eliminate it.

There’s a single button on the underside of the watch to power it on and quickly access the Settings menu, but it’s not really designed to be used often. The main points of interaction with the ZenWatch — and any Android Wear device — are through its touchscreen and with your voice.

The ZenWatch’s strap is soft tan-colored leather, with a metal deployant clasp. You can quickly swap it for another band if the color or style isn’t your fancy. The folding metal clasp is a nice touch: it looks nice, makes the watch easy to take on and off, and doesn’t damage the strap the same way that traditional loop clasps do. On the downside, it adds thickness at the point of closure, so I often found the ZenWatch uncomfortable to wear while typing on a laptop. The strap is more durable than the Moto 360’s, but it’s still as pliable and comfortable as any other leather strap.

The ZenWatch doesn’t have wireless charging, but requires a clip-on charging cradle for a Micro USB charger. You’ll have to use that cradle every night. Like most Android Wear devices, I was able to get a solid day out of the ZenWatch before it needed to be recharged, but not much more. Turning off the convenient ambient display feature (which makes the ZenWatch practical as an actual watch) stretched battery life into the next day, but I was never able to go two full days without needing to charge it. 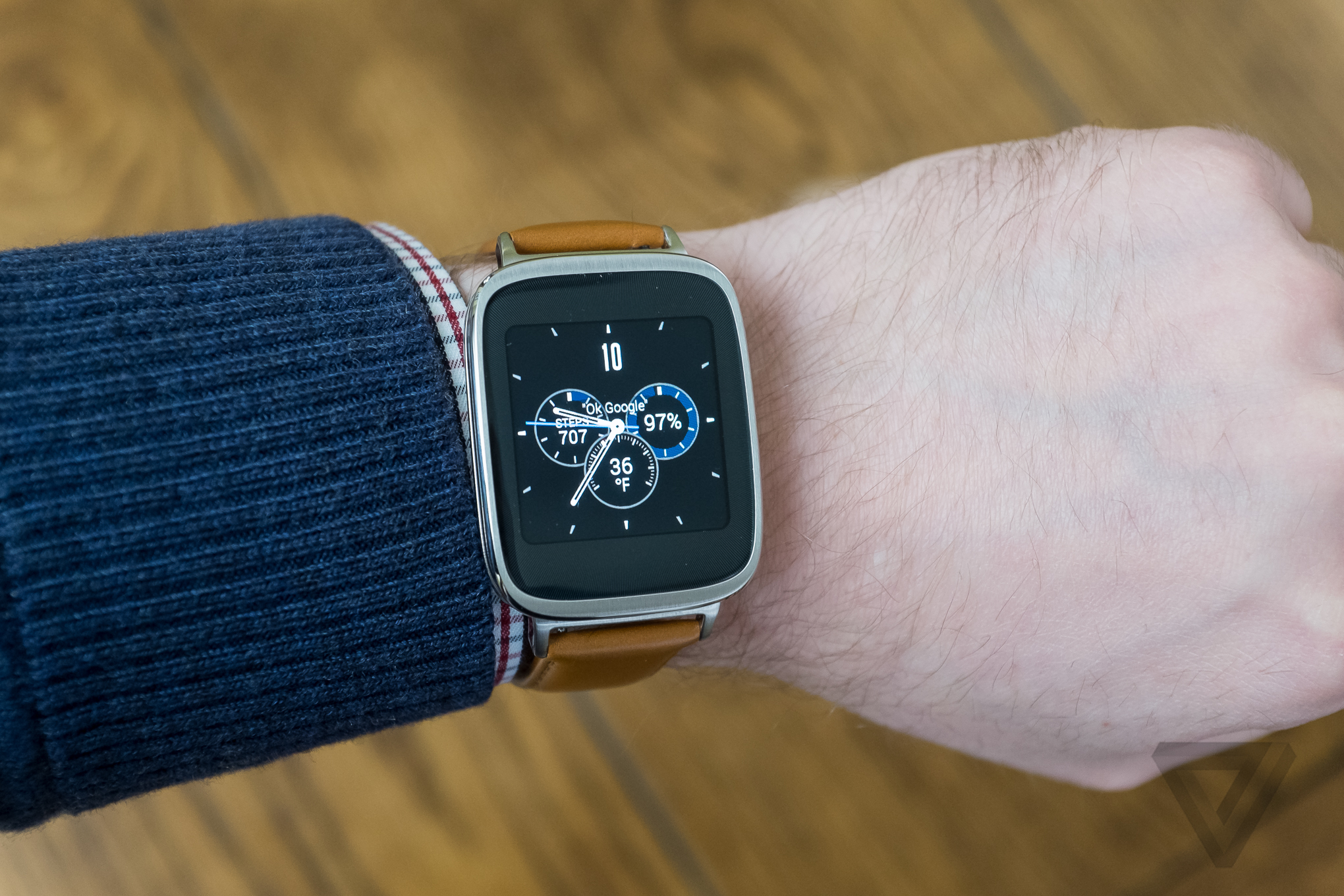 The ZenWatch runs the same Android Wear software as smartwatches from LG, Samsung, Sony, and Motorola, and it has the same set of features and limitations. We’ve already gone in depth on Android Wear numerous times, so I encourage you to check out those earlier reviews if you’re not familiar with it. Basically: you can see all of your phone’s notifications on your wrist, send messages or perform Google searches with your voice, or do things like control your smart lights with one of the many apps that have been developed. It’s a powerful platform, but still has a number of usability and reliability issues, which prevents me from recommending it to anyone without reservations.

For better or worse, the ZenWatch’s performance is on par with other Android Wear watches, meaning that it’s mostly fine, but can be annoyingly slow at times. It isn’t as responsive to voice commands as the Moto 360, but that didn’t prevent me from sending messages to my wife without touching my phone. More frustrating to me is the ZenWatch’s poor response to the wrist motion to wake up the display.

The ZenWatch performs as well as any other Android Wear watch

Asus isn’t able to change the main interface of Android Wear (Google doesn’t allow it), but it did add a few apps of its own for both the watch and your smartphone. The ZenWatch has a number of attractive exclusive watch faces that complement its more elegant design. Some of those can be customized to display extra information such as step count, watch battery life, phone battery life, or current weather conditions using Asus’ smartphone app. I’m particularly fond of the large digital face that I’ve set to also display the date, my step count, phone battery, and weather. There’s a camera remote, which turns the watch into a viewfinder for your phone’s camera, along with a compass and a flashlight app that displays a solid color on the ZenWatch’s display. (That last one’s not very useful.) 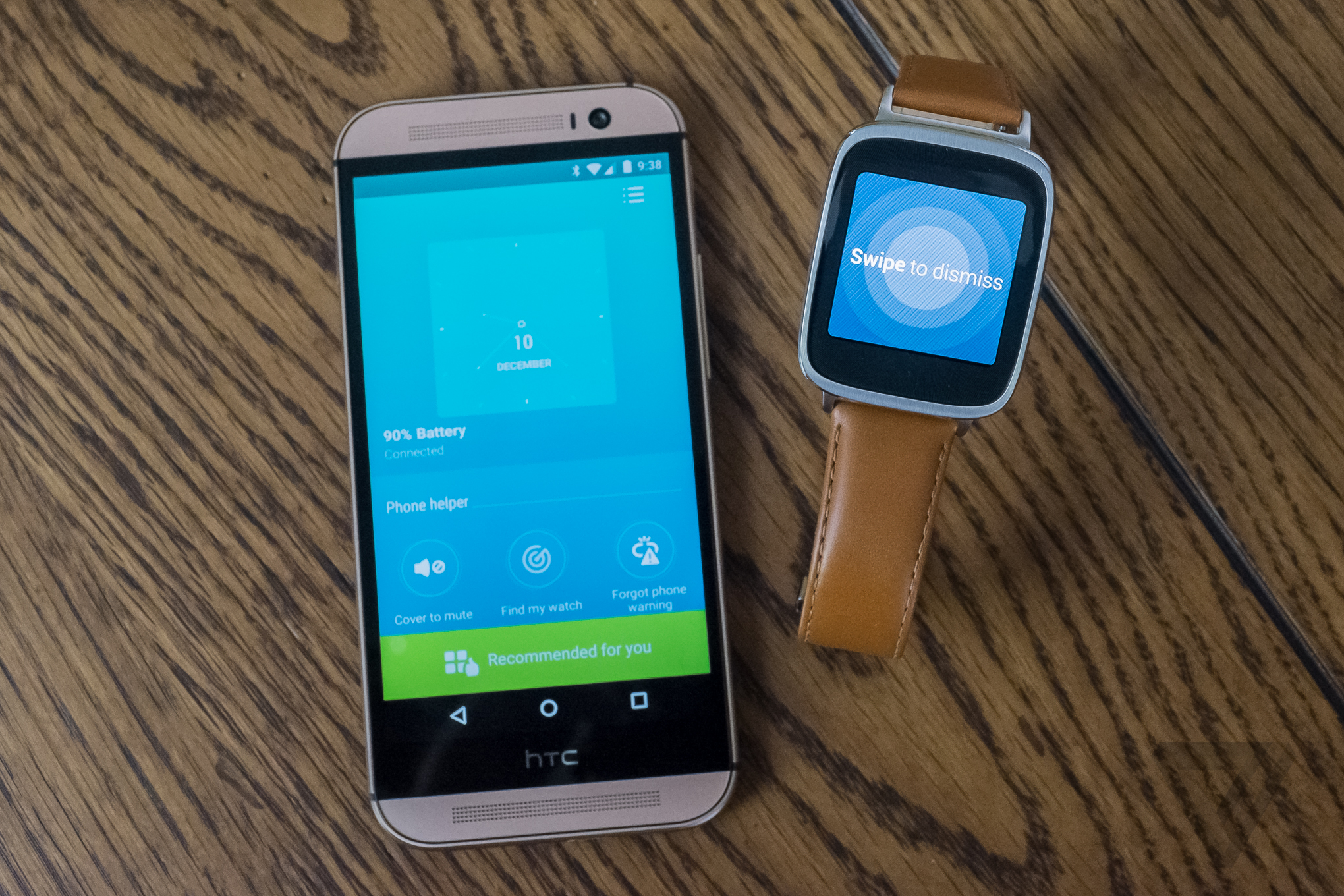 The ZenWatch Manager app offers a few exclusive features that other Android Wear watches lack. It lets you set the ZenWatch as a trusted device on your phone, even if you don’t have Android 5.0; sound an alarm on the ZenWatch in case you lost it in the couch cushions for some reason; or set up an alert on the watch if you leave your phone behind somewhere.

Asus also offers a health and fitness app for both the watch and the phone that logs step counts, heart rates, and mood as measured by the ZenWatch. It’s supposed to be the "zen" part of the ZenWatch. The Wellness app wouldn’t work on my Android 5.0 Lollipop phone, but the watch portion still measured my steps and vitals.

The larger problem is the ZenWatch just isn’t good for counting my steps or measuring my heart rate. Step counts varied wildly and were never in sync with the Fitbit I wear on my other wrist: sometimes they were thousands of steps higher, sometimes they were thousands of steps lower than what the Fitbit reported. The ZenWatch isn’t a device I’d wear at the gym anyways (the leather strap and metal body pretty much put that out of the question), but it’s not too much to expect reliable step counting for my day-to-day activities and the ZenWatch fails in that regard.

Step counts and heart rate measurements were all over the place

Measuring your heart rate on the ZenWatch isn’t like with other smartwatches, which use a light underneath the watch to read your pulse. Instead, you place two fingers on the metal frame at the same time, completing an electrical circuit. Unfortunately, this isn’t any faster than the other method, and like the ZenWatch’s step counter, can be all over the place with its readings. I’m pretty sure my heart rate doesn’t shift 100 beats per minute in two minutes of standing still, but that’s often what the ZenWatch told me. 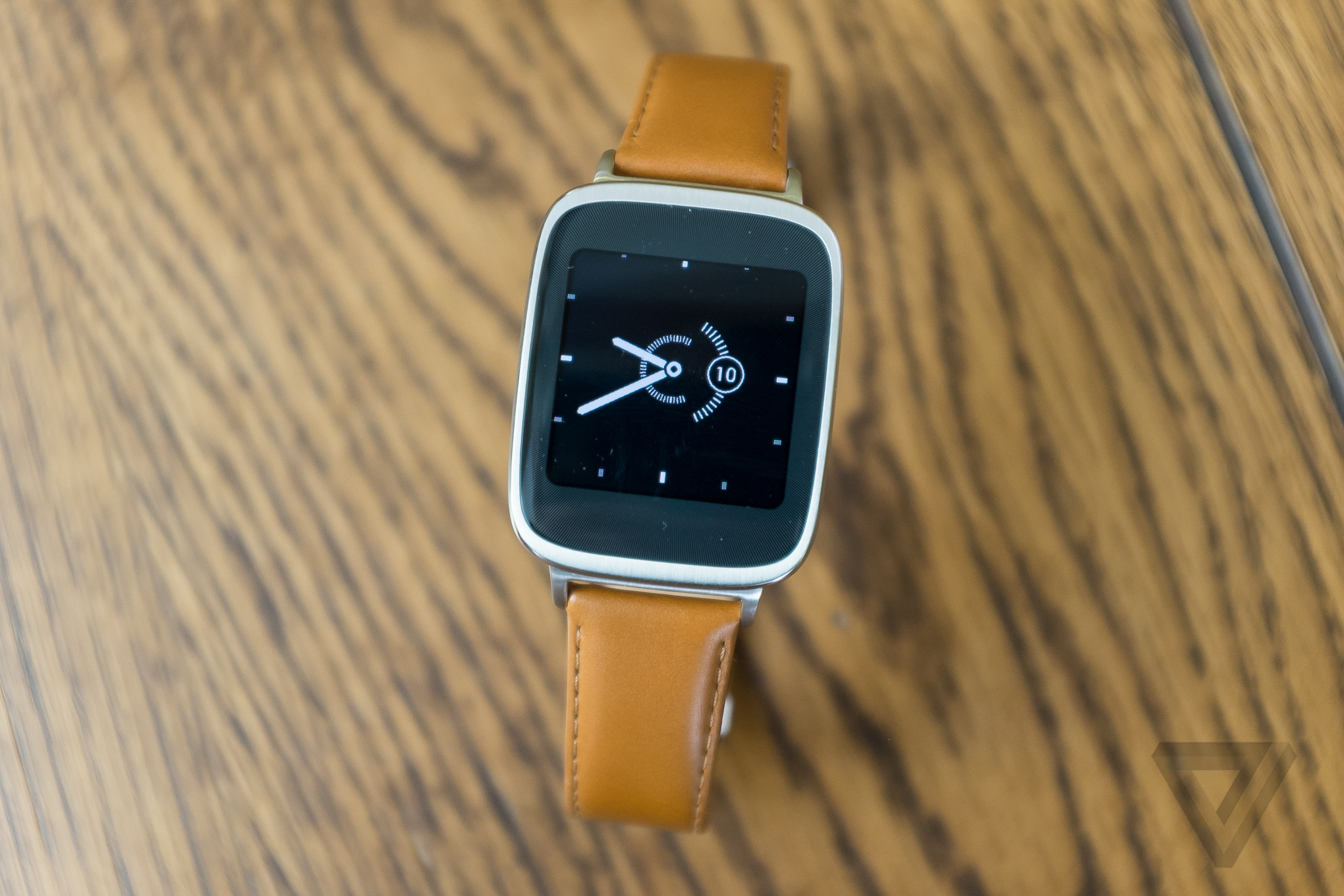 For all its faults and imperfect features, though, if I had to choose an Android Wear watch to wear every day, the ZenWatch would be it. It’s less expensive than the LG G Watch R or Moto 360, but looks nicer and is more comfortable than either of those on my wrist. It’s something I could just as easily wear out to a formal event as I would to work every day. Even my wife said it was a nice-looking watch, and she hasn’t been too kind to other smartwatches in the past.

I’d love to have more accurate step counting and better battery life, two things which could potentially be improved with software updates. I’d also like Android Wear to be easier to use and more reliable, but that responsibility falls on Google more than Asus at this point. The ZenWatch makes the best of what’s available with Android Wear right now, and I can’t really ask for more than that.

If I had to choose an Android Wear watch, the ZenWatch would be it

$199.99 at Best Buy$199.99 at Google Play
How we rate and review products
Most Popular
From our sponsor
Advertiser Content From