In a move straight out the Hollywood playbook, the BBC has licensed its most popular franchises to be "brought to life" at a theme park in southeast England. Rides inspired by the likes of Doctor Who, Sherlock, and Top Gear are all expected to be on show when the £2 billion ($3.14 billion) London Paramount opens its doors in 2020.

The project is being built in Kent (an hour's train ride from London) with the help of US film studio Paramount Pictures. Developers plan to lure foreign tourists away from the capital with hotels, theatres, and rides based on a mixture of BBC shows and Paramount films with currently-licensed titles including Star Trek, Mission: Impossible, and The Godfather.

Licensing some of the nations most "iconic and cherished characters" to sell roller-coaster rides and hotel rooms might seem like an unusual move for a public service broadcaster such as the BBC, but the intellectual property involved is being sold by BBC Worldwide - the corporation's commercial arm.

It's another sign that the BBC's properties have graduated to Hollywood-sized marketing, joining the ranks of big budget blockbusters like Harry Potter, Star Wars, and more in getting the theme park treatment. Many of the BBC's hits already attract sizable foreign audiences that dwarf those at home. The third series of Sherlock, for example, is estimated to have attracted some 69 million viewers in China alone and with Chinese tourists estimated to spend $1.57 billion in the UK by 2017, it's no wonder the BBC are keen to join the dots of fandom and tourism. 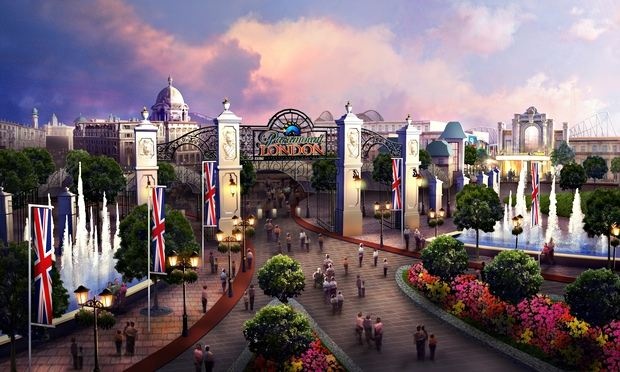 An artist's impression of the London Paramount theme park.

The project is also being funded by foreign coffers, with money for the overseeing body (the London Resort Company Holdings or LRCH) supplied by the Kuwaiti European Holding Company (KEH) — a holding investment firm run by Kuwait's rich Al-Humaidi family. In a press statement regarding the project David Testa, director of the LRCH, hailed the BBC's "iconic and cherished characters" before promising that the resort will "combine the glamour of Hollywood with the best of British culture." All at a price.