HP Stream 11 review: meet the next generation of cheap laptops

Share All sharing options for: HP Stream 11 review: meet the next generation of cheap laptops

Netbooks were actually a great idea.

When you boil it all the way down, it’s simple: build a computer that does all the things an average user needs and doesn’t try to do anything else, and sell it as cheap as possible. The problem was in the execution: netbooks were poorly made, slow, ugly, thick, hard to use, too small, didn’t last long enough, and were just generally a mean thing to force upon anyone you care about.

Windows manufacturers ran away from the netbook after it was attacked on all sides. By tablets, which were longer-lasting and easier to use; by smartphones, which became powerful enough to do most things; and by Chromebooks, which quickly ate up the ultra-cheap laptop market. But a Chromebook is just a netbook with a better sense of timing. Google got into the $200 laptop game only when there was enough cheap computing power available that it could offer a decent experience in an inexpensive package. It’s actually not hard to build a good, cheap laptop anymore.

Microsoft has also been working for years to make Windows 8.1 into a platform that works on any device, in any situation. Even as computing power became commoditized, Microsoft began to offer desktop software that doesn’t need much power at all.

Put it all together and the next step is obvious: Microsoft is back into the cheap laptop game. I’ve been using the first attempt, the $199 HP Stream 11, for a few weeks. It’s an 11-inch laptop, with everything a Windows device should have except for the high price tag.

The work’s not over yet, for Microsoft or anyone, but I think it might be time “netbook” stopped being a bad word.

I have a hard time imagining the Stream 11 in a Fortune 500 board room or in one of those British Airways first class seats that reclines all the way down. This just isn’t a particularly professional-looking device. It’s the colors: the Stream 11 comes not in black or silver, but in pink and blue. Neither is what I would call business-friendly. Or subtle. My blue review unit shifts in color from a royal blue on the lid to a sort of sea-foam blue on the palm rest; I like how it looks on my coffee table, but I don’t think I’d be terribly intimidating using it to engineer a hostile takeover.

Do you run a Dave & Buster’s? This’ll fit right in

It’s made of smooth plastic, matte on the outside and a speckled polka-dot design on the palm rest. It’s mostly very well-made, its sturdy and cohesive design flecked only by the occasional lip where two pieces of plastic don’t come together quite right. It’s both thin and light, at 2.74 pounds and little over three-quarters of an inch thick. It feels noticeably bulkier than the thin, sharp-edged MacBook Air or any of a number of Windows ultrabooks, but among $200 laptops, this one is hard to beat. Even the small scuffs on its plastic lid tends to accrue come off with a little spit-shining.

Other than the color, there’s exactly nothing strange or even interesting about the Stream 11’s design. It has USB and HDMI ports on one side, an SD card slot on the other, an overwhelmingly mediocre set of speakers on the bottom, and a bad-but-usable webcam.

It has an 11.6-inch, 1366 x 768 pixel display that is exactly the same as almost every other screen like it — it’s pixelated and dim, and has terrible viewing angles. (Getting a better screen is always why I recommend spending a little more than the bare minimum on a laptop.) It gets between five and six hours of battery life, which isn’t deal-breakingly bad but isn’t exactly impressive either.

It has a good, clicky, island-style keyboard that I got used to very quickly, that has a surprising amount of travel and feedback for a device this thin. It also has, much to my sadness and not at all to my surprise, an infuriating trackpad. It recognizes a clicking finger as a swiping finger, and a swiping finger as nothing at all. It works if you’re careful and slow and delicate with it, but the Stream 11’s trackpad was always the thing that slowed me down while I tried to use it. That’s actually still the best reason to buy a Chromebook instead: your $200 might buy you a decent trackpad.

Bad screen, bad trackpad, mediocre battery life – those are all the standard complaints with Windows laptops, especially cheap ones. The Stream 11 isn’t a new thing, or a different level of thing. It’s just a laptop.

That’s the whole point, actually. The Stream 11 is just a laptop. In the history of netbooks, that’s the best thing I’ve ever been able to say. After spending time with this device, I can’t for the life of me figure out why you’d spend, say, $500 on a Windows laptop anymore unless you’re desperate for a larger screen. No, the Stream 11 doesn’t play games well, or often even at all, but neither does your average $400 Windows machine. This computer runs Photoshop poorly, as does any other cheap laptop, but it does basically everything else as well as it needs to. I get why you’d spent $800 or $1,000 on a laptop, because it’ll do more or look better, but it seems to me that $200 and $500 now buy basically the same thing in slightly different sizes.

The Stream 11 is powered like a Chromebook, with an Intel Celeron N2840 processor and 2GB of RAM, and it performs like one. The upside is that it’s quiet and cool, and there’s not even a fan inside. The downside is that it can often be a beat behind as I work — I click an icon and count “one mississippi” before anything starts to happen — but it’s right in line with what I expect from a $200 computer. More importantly, it’s at least fast enough that I’ve never wanted to heave it out the window onto the pile of netbooks I just couldn’t wait for anymore. It browses the web well enough, plays Netflix movies well enough, and runs Office well enough.

“It runs Office.” That is, in a nutshell, why Microsoft and HP think you might want to buy a Stream 11 over your choice of Chromebooks. It comes with a year of Office 365 (which is itself half the price of the Stream 11), and promises a much more practical kind of productivity for most people. I do most of my work in Google Docs, Sheets, and Gmail, but I’m an anomaly; most professionals use Word, Excel, and Outlook. For those people, Office is everything. Just as the Chrome browser is the lifeblood of a Chromebook, its entire purpose and animating principle, so is Office to the Stream 11. This is an Officebook.

Deciding between a Chromebook and a Windows device like the Stream 11 comes down to how you wish to use it. Chromebooks are primarily single-use devices, just a browser and nothing more — that’s partly due to bad multitasking controls and offline support, but also to Google’s clear sense of Chrome OS as a simplified kind of workspace. The Stream 11, on the other hand, attempts to do all the same things as laptops hundreds and thousands of dollars more expensive. It just does all those things a little bit worse. Would you rather have a laptop that does a couple of things really well and nothing else? Or a laptop that does a couple of things pretty well and a lot of things badly? There’s no wrong answer, but picking a side makes picking a platform easy.

The HP Stream 11 is what Windows netbooks were always meant to be. It’s the most computer, in terms of sheer functionality, that you can buy for $200. It offers to many users all of the apps, services, features, and tools they need to get work done when they’re not sitting at their work or home desktop. It offers all that in a small, affordable package. To many of the people looking at a Chromebook as a way to get email and simple work done on the road, I’d now also tell them to look at the Stream 11.

I keep coming back to the colors, though. HP didn’t make a blue and pink line of laptops because it’s hoping SVPs will throw them into their Samsonite briefcases and take them into the Delta lounge. It made the Stream 11 for a different kind of user, the one Microsoft doesn’t currently have but hopes to obtain: the students, the young professionals, the people who, like me, use Google Docs and Gmail instead of Word and Outlook.

To win those users, Microsoft and HP needed to do more. They can’t win by offering the same experience and a few more apps — many people do everything in a web browser anyway, and that’s easy to get anywhere. The Stream 11 needed to win by offering spectacular battery life, or a killer display, or an insanely thin or beautiful body, or some piece of software or functionality that you can’t replace inside a web browser. The best cheap laptops, and the best Chromebooks, offer at least one of those things. (Let’s not forget, either, that Office Online works just fine on a Chromebook.)

If you’re looking for the cheapest viable way to work on Office documents while you fly, you need an Officebook, and the Stream 11 is the only real option. (Just maybe paint it black before you get on the plane.) There’s a market there for Microsoft and HP, but there’s work to do before it can turn a low-end Windows machine back into something everyone wants to buy.

The problem with netbooks was never the idea. It’s still the execution.

Our review of HP Stream 11 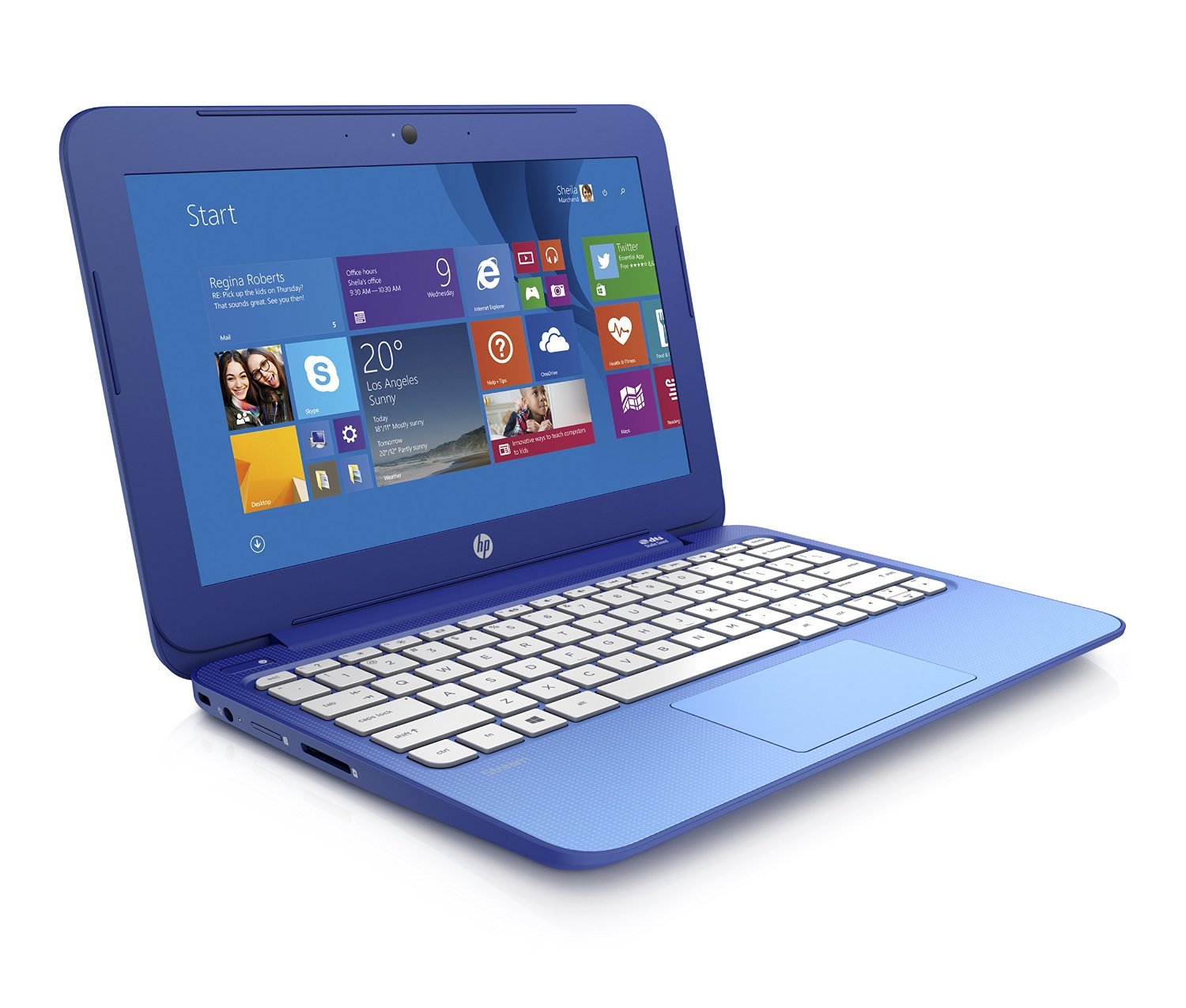