I sometimes romanticize the idea of being a "power user," someone who can get done in one click things that would take everyone else five or six. But that status often comes with a lot of time spent setting up apps and scripts, which often require very specific knowledge. That's why services like If This Then That (IFTTT) are great — they make being a power user accessible by mixing customizable functionality with a passionate community and an easy-to-use interface.

New to iOS devices today, however, is an app called Workflow. It takes the approachability of IFTTT and tries to one-up it with a colorful drag-and-drop interface. Unlike IFTTT, which essentially can only program two parts to each "recipe," Workflow lets you program seemingly endless chains of instructions that can do everything from simple actions like "tweet what song you're playing" to gathering the addresses of all of your day's meetings in an email.

Compatibility is important when it comes to apps like this, and Workflow already works with a few key ones like Venmo and Dropbox. But the best thing Workflow has going for it is its integration with iOS. You can take your favorite shortcuts and add them to the homescreen or — even better — apply action on a specific file in another app via the share sheet button.

I spent a few hours diving into what Workflow already has to offer, as well as trying to come up with my own concoctions. Some of the existing shortcuts that Workflow features in the "Gallery" (the name for the app's marketplace) are already pretty great, like being able to batch-airdrop recent screenshots taken on your phone, quickly make and tweet into a GIF, or being able to summon an Uber to the next event on your calendar.

All of these are started with one tap, but they will sometimes prompt you for more information as the action is working through the steps involved. Workflows downloaded from Gallery can be tweaked to your liking, all you have to do is open one up and you can add or remove steps, or change the values of each. That's also a good way to get started with the app — just take one that works and see what else you can add until it breaks the process. 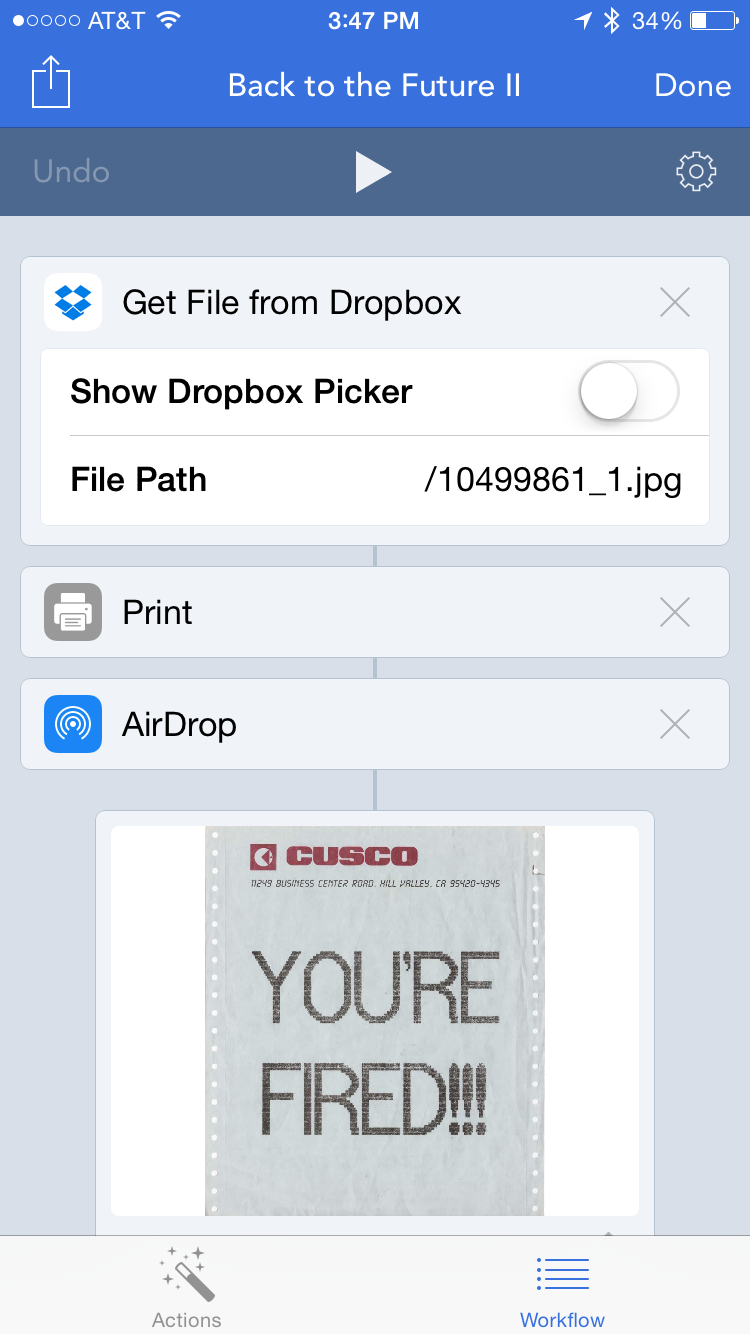 It goes deeper, too. With only a half-hour of familiarity I was able to set up a workflow that can find the locations of meetings I might have on any given day, pull images of the buildings they're in from Google Street View, and email them all to me. The app can call on over 150 actions, which can be a little overwhelming at first, but it's worth taking the time to explore them all. It can even let you script actions bit by bit if you wish, but that leads to one of its biggest problems — it needs to do a better job of telling you where and why things are going wrong when a workflow doesn't work. When a workflow breaks, the action typically just stops, and even when an error dialogue does pop up it doesn't necessarily nudge you in the right direction.

Workflow will be even better with a robust community behind it

It's clear the team behind Workflow wants to foster a community around it that creates and shares great ideas. But it's not obvious how easy it will be interface with all of that. Right now, the Gallery is too simple, and reminds me a lot of what I don't like about Pebble's app marketplace. Different workflows are separated into categories, but it's hard to tell if you're actually seeing all there is to see in any given one. And unlike IFTTT, there isn't a web interface, which could allow for more granular searching.

Hopefully those things will develop as more people find out about the app, because it's already very capable. As clever as we all like to think we are, it never hurts to have experts setting a high bar. Until then, I'll be buried in my phone, trying to set better workflows for requesting money for tacos.

Workflow is available in the App Store for $2.99.