'They look like punk rockers in the '70s and '80s and they have purple blood.'

There are five new species of snail in town, and one of them is a little punk rock. According to a new study published in the journal Systematics and Biodiversity, a group of researchers decided to name a spiky-looking sea snail after The Clash's Joe Strummer, because of its "hardcore" nature and appearance. Thus, a snail named Alviniconcha strummeri gets to join the ranks of previous rock star animals, such as Dendropsophus Ozzyi — a tree frog named after Ozzy Osbourne — and Phialella zappai — a jellyfish named after Frank Zappa. 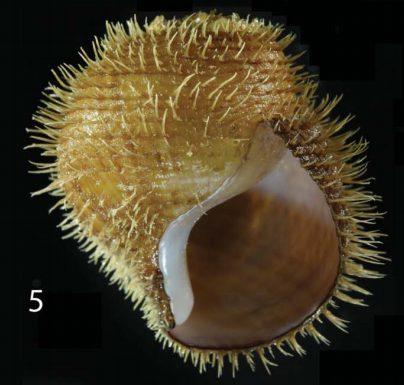 "Because they look like punk rockers in the '70s and '80s and they have purple blood and live in such an extreme environment, we decided to name one new species after a punk rock icon," Shannon Johnson, a researcher at the Monterey Bay Aquarium Research Institute and a co-author of the study, told the Santa Cruz Sentinel.

"the name highlights the ‘hardcore’ nature of Alviniconcha snails."

The study isn't just about the Strummer snail. It describes five species of sea snails that were previously thought to belong to a single species. All five live at the bottom of the ocean floor, near hydrothermal vents, in the Western Pacific and Indian Oceans — harsh environments where most oceanic creatures can't survive. But given the Strummer species' name, the parts about Alviniconcha strummeri make for a particularly delightful read. For example, the researchers write that "the name highlights the ‘hardcore’ nature of Alviniconcha snails," and that "the spiky periostracum resembles the fashion of punk rock bands."

It might not always appear that way, but scientists can't just name new species however they want. There are international rules to follow that ensure that connections are made between a particular animal's name, and its genus or family. But once those rules are taken care of, there's more than enough room for a little whimsy, or in the case of a particular new species of sea snail, for a little punk rock. And the truth is that for many researchers who work on less "popular" species, staying away from conventional names means that they can drum up a bit more publicity and attention than a regular snail taxonomy study might normally attract.

"In our culture, it is one sure way to get species noticed," Quentin Wheeler, director of the International Institute for Species Exploration at SUNY, told the Santa Cruz Sentinel. "Some scientists frown on the practice, but [if] their science is in trouble, and if a little humor helps, why not?"