If you've ever wondered what would happen if you told a bunch of architects to design a building without worrying about the realities of budgets, bylaws, or building codes, here's your chance to find out. A competition run by Helsinki Design Week and a Finnish construction company called Ruukki asked architects from around the world to submit their plans for Santa's "logistics center" — a center from which Santa can run his toy operation. Despite the corniness of the task, close to 250 designers went ahead and did just that, and the buildings they imagined are actually pretty cool.

a building that's "invisible" during the day and visible at night

The competition's winners, for instance, devised a building that's "invisible" during the day and visible at night — "just like Santa," they write. This is achievable thanks to two-way mirrors and facade projectors that transform the mirrors into a screen at nighttime. Now that they've won, the winners — two Romanian architects named Alexandru Oprita and Laurentiu Constantin — will receive $1220, and a 10-week internship at Snohetta, an international architecture office in Norway.

The runners-up were just as imaginative. Two Polish architects, for example, designed Santa's workshop as a giant, public climbing wall that sort of looks like an icy hockey puck. The building is powered by a slew of solar panels that they placed on the roof. "Finland is mostly flat country," the architects write in their proposal. But Finns love winter sports. So, "the building will give them opportunity, not only to climb in the summer, but also to iceclimb in winter." 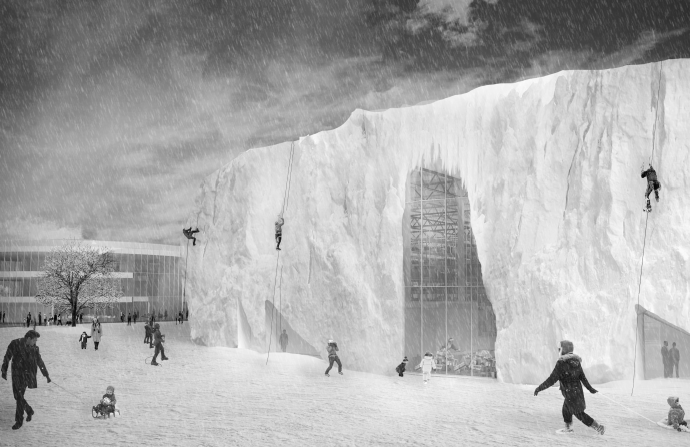 The jury also gave an honorable mention to a team that completely ignored the competition's guidelines. Instead of building Santa's workshop, they came up with "Santa Claus' Planetary Garden." The honorary mention, the jury explained, was given to them because the environmental message behind the building was "so strong."

honorable mention to a team that completely ignored the guidelines

In their description of the building, El Hadi Jazairy, Chen Lu, and Kelly Koh explain that Santa has quit his job and has traded "his red-and-white outfits and expeditions around the world selling hyper-sugared carbonated refreshments for the costume and life of a planetary gardener." Thus, Santa's Logistic Center no longer represents consumerism, but Kris Kringle's willingness to tackle the threat that human development poses to the world's ecosystems. "It is up to humans to organize their territory and life, to consume without defacing, produce without depleting, to live without destroying," the architects explain.