Whenever I’m wearing some new gadget on my wrist, people ask about it. Co-workers are idly curious about which smartwatch or fitness band that is; my girlfriend asks why it’s so ugly and when I’ll take it off. A few, like the Moto 360, prompt strangers to stop me on the street or subway and ask if that’s what they think it is. (Yes, it is. Yeah it’s cool, I guess. No, sorry, I can’t let you wear it.)

No one asked about the Withings Activité. I don’t think anyone knows they should.

I’ve been wearing it for a week. It’s one part standard wristwatch, one part fitness tracker. It tracks your sleep, steps, and activity. It costs $450. It’s beautiful: made of carefully machined sapphire, calf leather, and stainless steel. It looks like a watch in the most traditional sense.

It’s exactly what you think it is, exactly what it should be. It’s not the future of smartwatches — it’s not even a smartwatch. It’s just a watch, with more in common with century-old chronographs and calculator watches than the Apple Watch. And the Activité, or something like it, is almost certainly the future of watches. 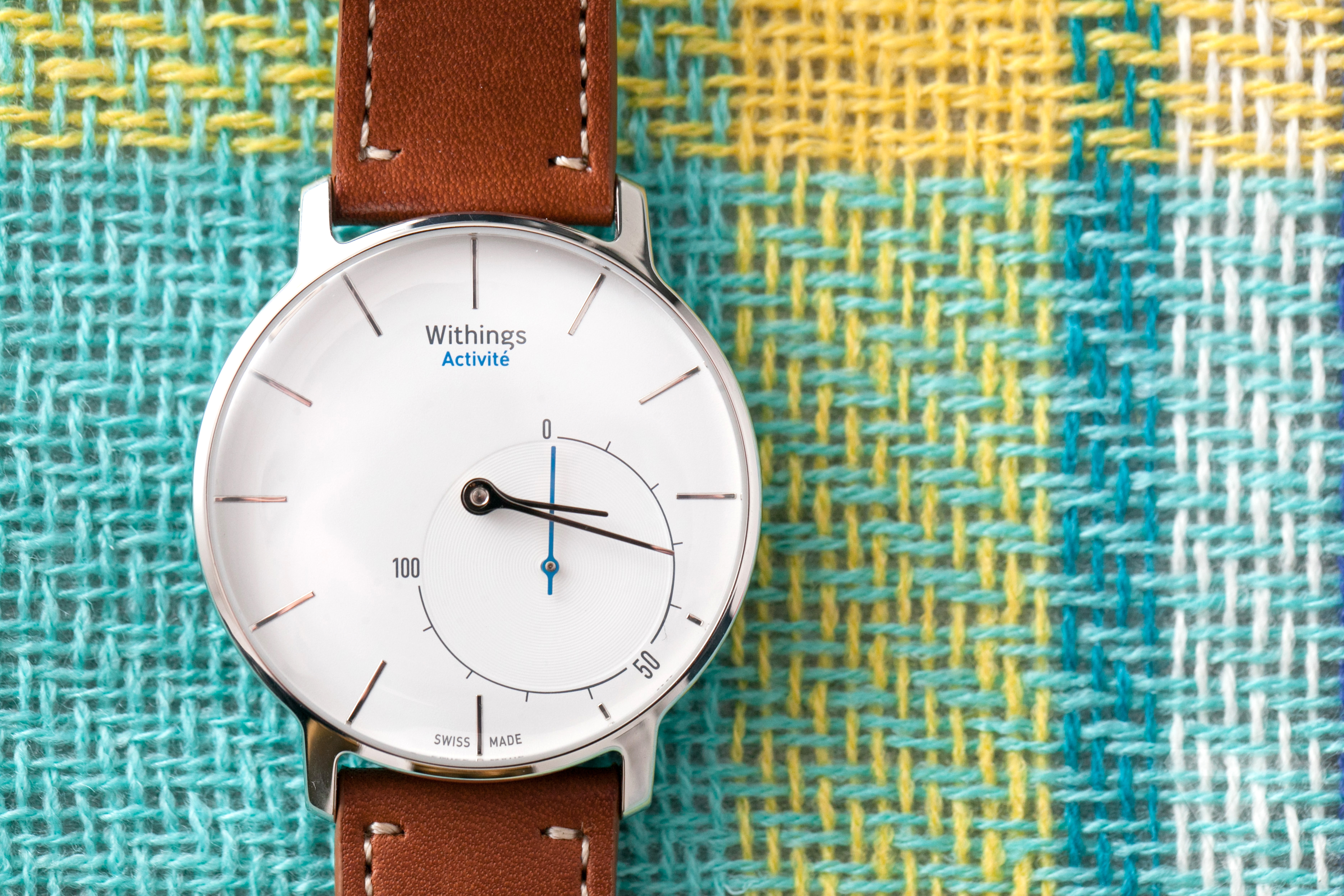 The Activité (pronounced Ac-ti-vi-TAY) is made in Switzerland. It’s Swiss Made. I know this because it’s written three times on the long, slender white box the watch comes in, and because it’s also written twice on the watch itself. Despite the in-your-face overpromotion, Swiss Made is actually a big deal. It’s a phrase carefully regulated by the Swiss government, one designed to make sure that the "Swiss watch" label is given only to timepieces of the highest quality.

The Activité certainly earns its label. It’s beautiful, carefully assembled, and yet ruggedly ready for anything you throw at it. Its stainless-steel case is almost invisible from the front, which is given almost entirely to the dome-shaped sapphire glass above the dials. When I spoke to Withings CEO Cedric Hutchings in June, he raved about what he called the double-curved glass, saying it has "a very tiny reflection." There are moments, when the light catches on the glass just-so, when I get what he means. For the most part, though, the reflections on the domed glass just make it harder to tell the time unless I’m looking at the watch exactly head-on. I don’t mind the look, and I love the way the watch’s face feels to my fingers — smooth, sleek, organic. I’d just rather the Activité be a little thinner and a little flatter. 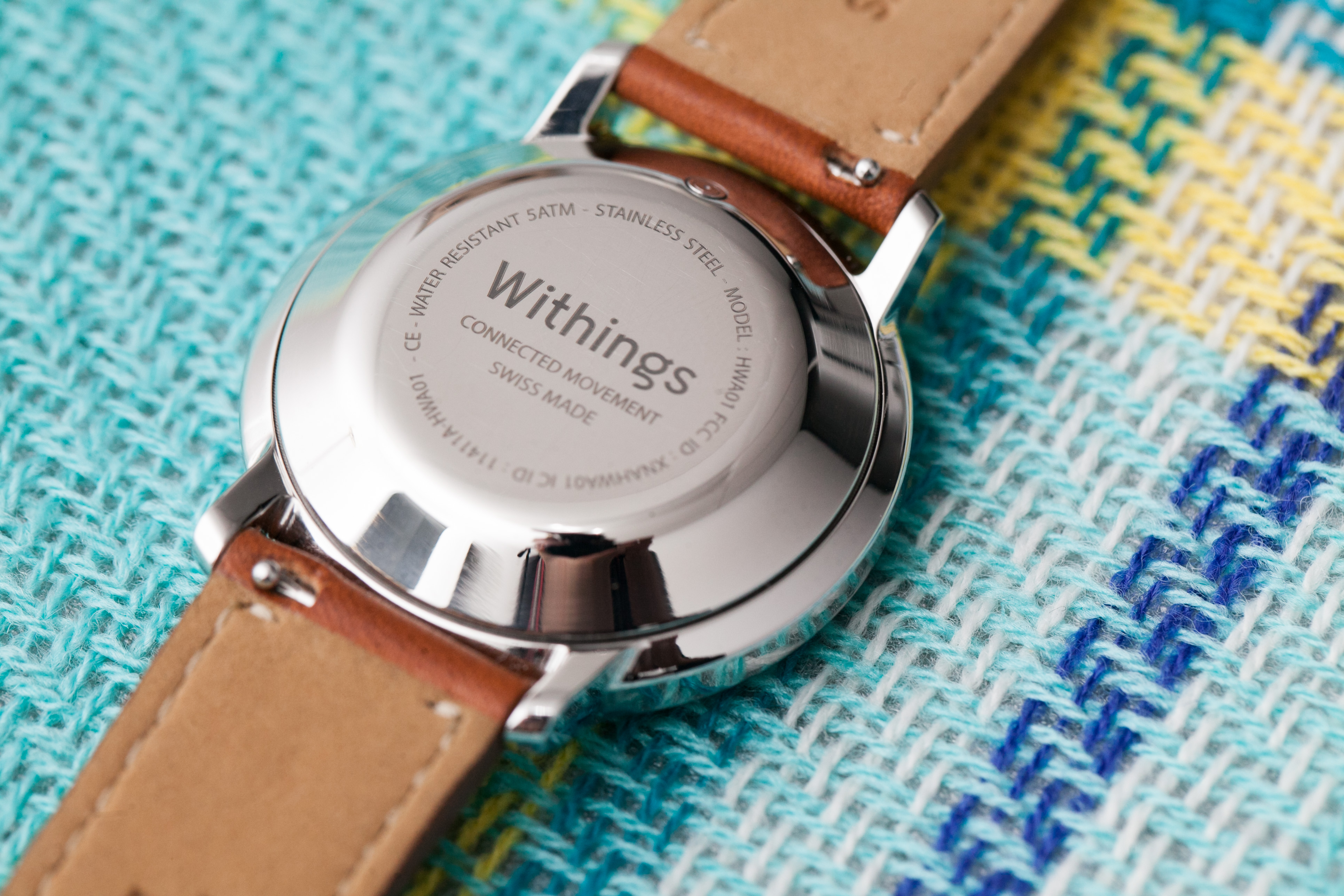 One size doesn't quite fit all

That’s my only real complaint about the Activité: it’s just thick enough to catch on my shirtsleeve, or my coat, or the headphone cord of the unlucky guy standing next to me on the subway. It’s not a big watch, just a tall one. Actually, at a decidedly unisex 36.3mm in diameter and 1.3 ounces, I suspect buyers are more likely to complain it’s too small.

Ditto the brown leather strap that came with my review unit, which is thin, finely stitched, and measurably nicer than the leather band I bought for my Seiko last year. It’s also available in only one unisex size, for now, and my decidedly average-size wrists were just barely small enough to fit. Withings was actually surprisingly successful in making a single device that men or women can wear, but there are plenty of people for whom the small included strap just won’t work. 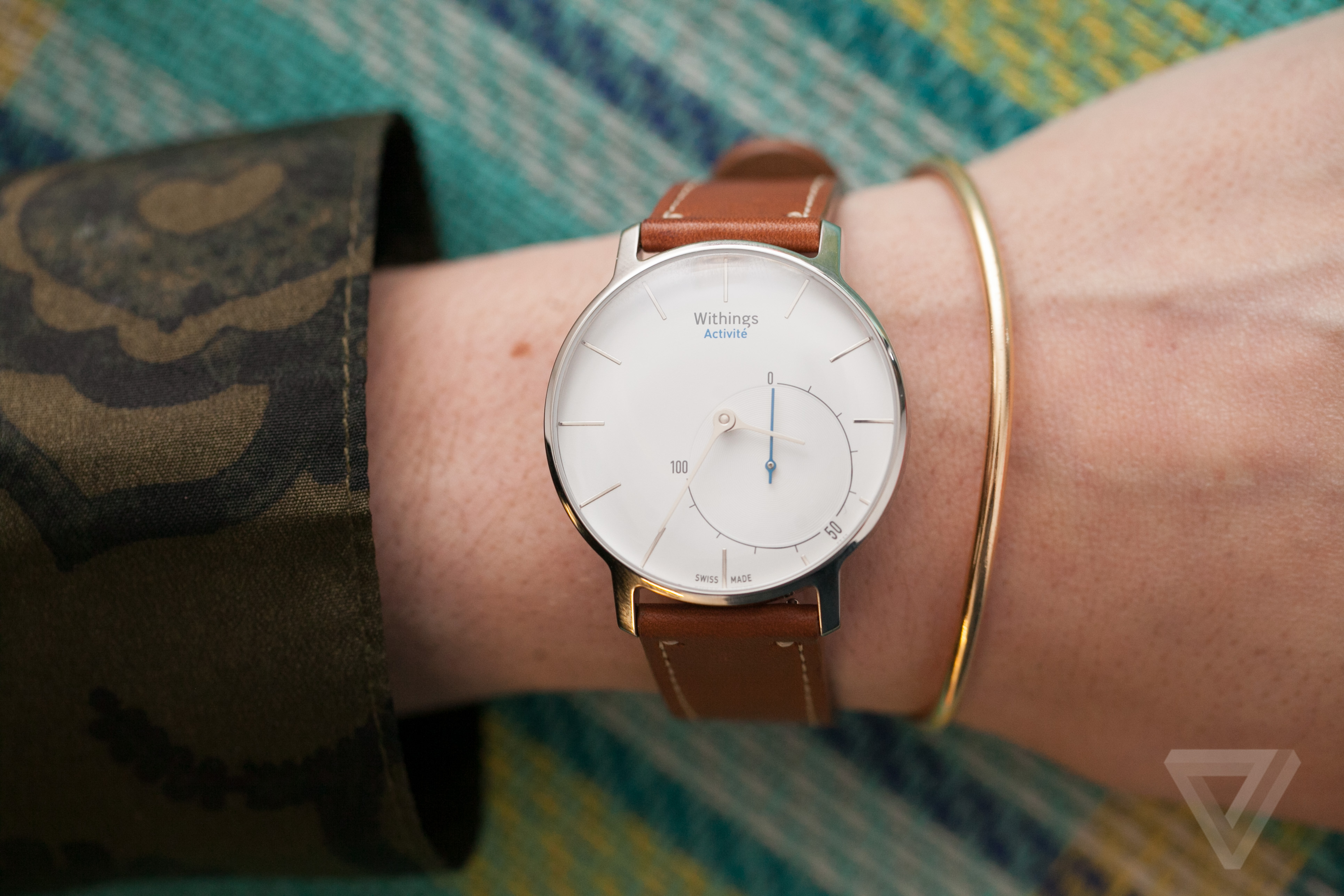 On the Activité’s round face, which comes in either black or white, are two dials. The first does that ticking thing a watch does and tells the time (but not the date, which I wish it did). It’s beautifully simple, 12 silver dashes around the side, a Withings logo under the 12 and the words "Swiss Made" surrounding the 6. (Did you forget it was Swiss Made? How dare you!) Down in the bottom right, there’s another dial. It counts from 0 to 100, with marks at intervals of ten. It’s the Activité’s one and only clue as to the technology that lies inside, and it’s there that this becomes more than just a timepiece.

If you have an iPhone, the Activité syncs its data via Bluetooth to Withings’ Health Mate app. (Android support is coming soon, I’m told.) That’s the highest-tech thing that it does. Then, whenever you’re wearing the watch, it tracks your activity: your steps, your sleep, your swimming. It’s not a particularly sophisticated workout device, just a simple activity tracker.

You'd never know there's anything unique going on inside the Activité, and that's the whole idea

It’s all but invisible as it works. The only indication is the hand on that second dial sweeping from 0 to 100, displaying the percentage of your step goal you’ve reached so far today. After a five-minute long set-up process — in which you use an included pin-like tool to turn the watch on, connect it to your phone, and set the time by spinning a dial on your phone — you never have to do anything on the watch itself again. Every setting, every feature exists only on your phone, and a lot of the Activité’s job happens automatically. Its algorithms figure out what you’re doing and track each activity differently. I actually wish there were more I could do on the timepiece itself, but I don't mind the way it works here.

The watch is meant never to come off your wrist. Its battery (which is just a watch battery) lasts eight months, and there’s even a second one in the box. It’s water-resistant enough to wear in the shower, as long as you switch to the included silicone strap instead of the very much not-water-resistant leather. Its silent alarm buzzes your wrist to wake you up at the appointed time, so you’re even meant to wear it to sleep. Sleeping was the only time I didn’t wear it; having anything on my wrist, especially something as coldly metallic as the Activité, makes it hard to fall asleep. The alarm itself is annoying, too: you can’t turn it off, you just have to wait the 30 seconds or so while it buzzes on your wrist. I literally flung it across the room while it was still buzzing, one particularly early morning. 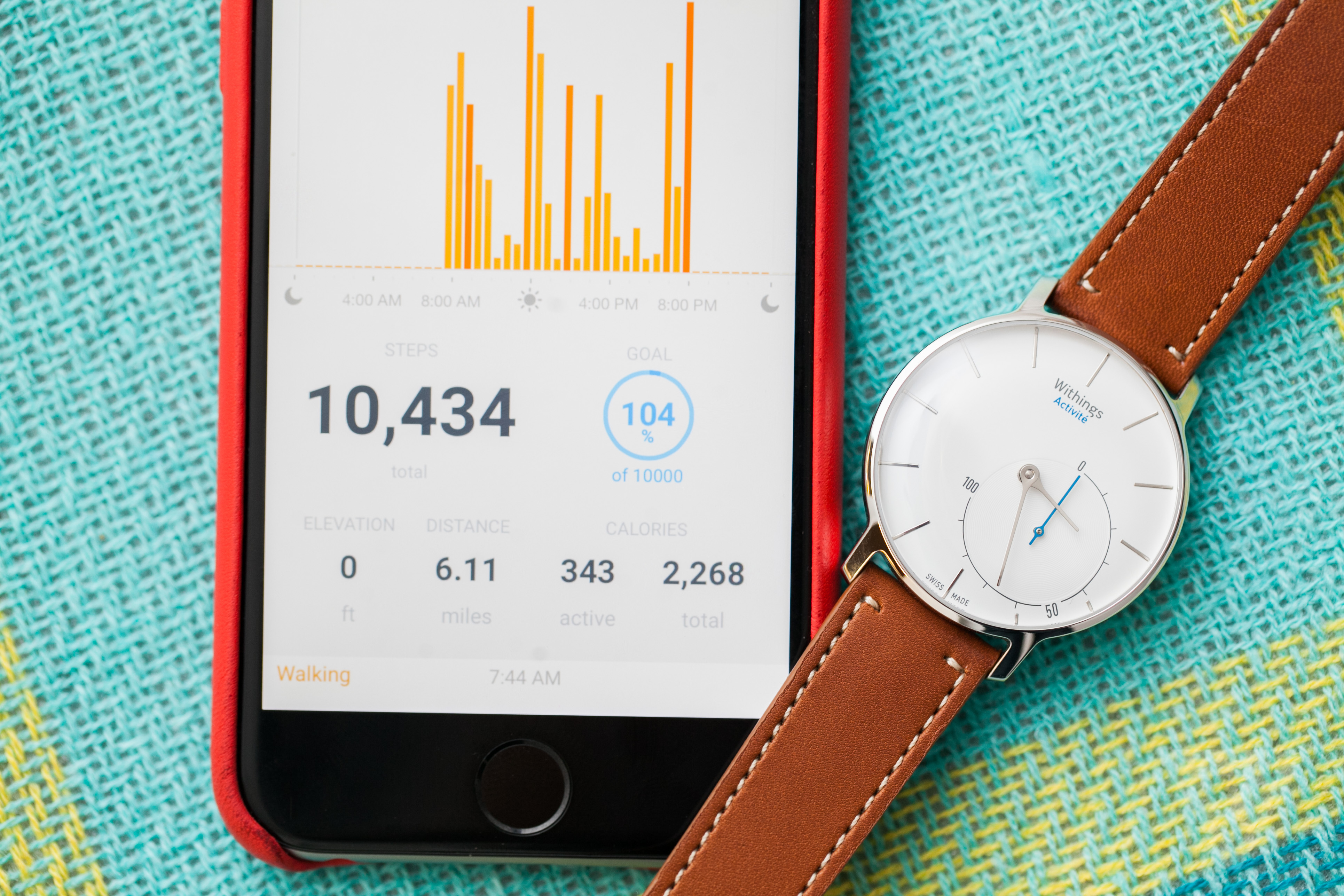 The Health Mate app is fairly standard activity-tracking fare. There are lovely graphs of your activity and sleep over time, and badges for when you do things like meet your step goal or sleep particularly well. You can have Withings friends who you challenge to take more steps or lose more weight. If you use a Withings scale, a Pulse fitness band, or the Aura sleep tracker, they all funnel more and better data into the same place. It also collects data from RunKeeper and similar apps, and can send it to Apple Health. The more data you collect, the more useful Health Mate becomes: it can tell you that you took fewer steps today than on an average Wednesday, or that you need to be more active in order to sleep better. The app can also programmatically remind you to, say, drink more water or get to bed early. The reminders amount to basically having your mother around yelling "Bedtime!" at 11:15 every night, which I loved. Health Mate isn’t a terribly beautiful or intuitive app, but it does everything it needs to, and it’s getting better all the time.

None of that, of course, has much to do with the Activité. All the watch does is feed data into that system. If you tap on the sapphire, the hands will quickly rearrange to show you what time your alarm will go off, but otherwise there’s no two-way interaction at all. In a way that’s frustrating, because you need your phone to do everything, including set the time, but it’s actually quite clever. Since the Activité is just a dumb data-collection device, you’ll never need to upgrade it to get new functionality. Withings can upgrade the Activité’s firmware to read more and more accurately, and it can update its app to do absolutely everything else. Most smartwatches, especially above a certain price, are going to run into an upgrade problem: why would I spend a thousand dollars on a watch I’m going to need to upgrade in a year? The Activité doesn’t have that problem, because it doesn’t try to do anything. You’ll upgrade your phone in a year, Withings will update its app far more frequently than that, and suddenly your watch will become even more useful. 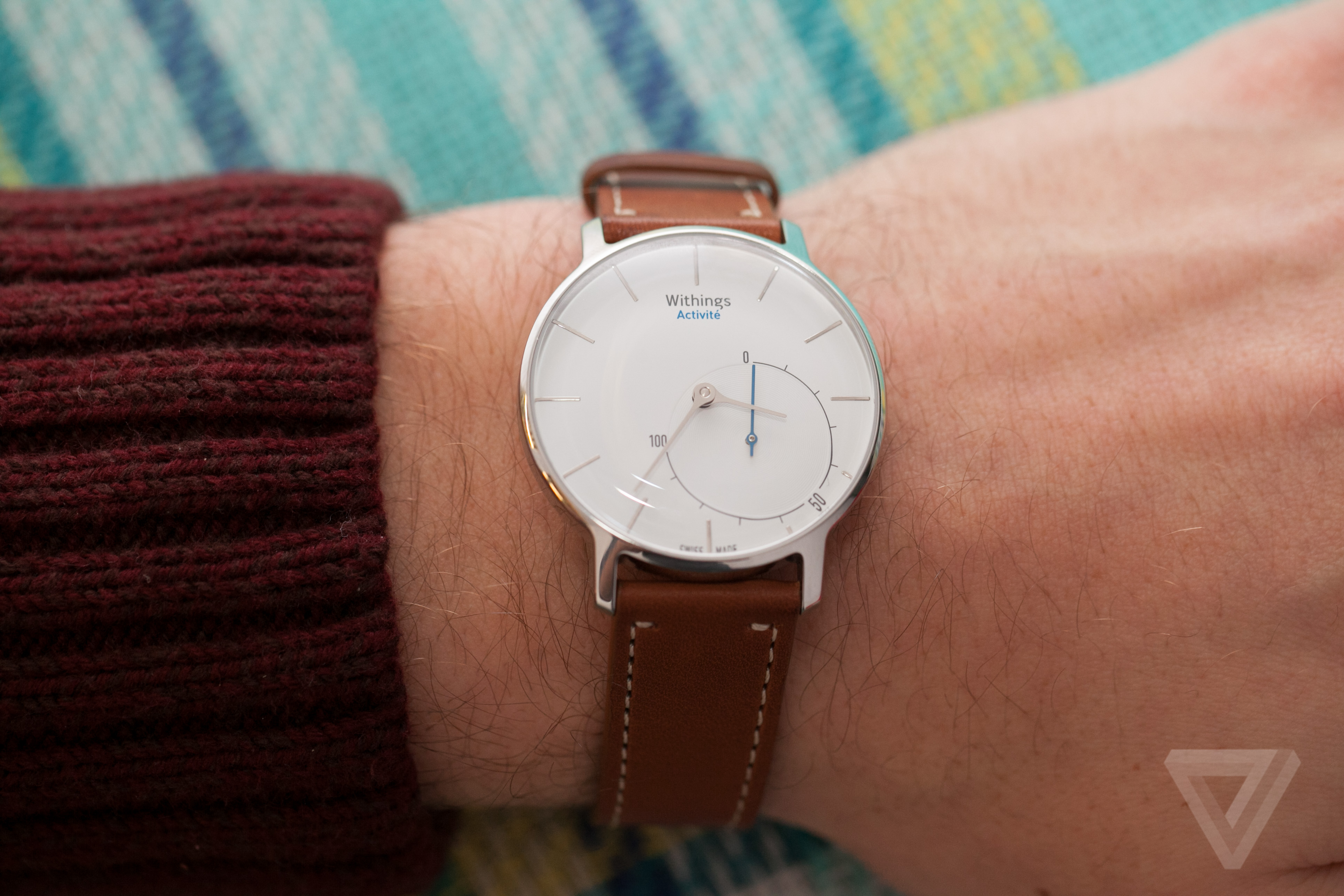 The lesson of the Activité is how trivially easy it is to add these data-collection tools to a wristwatch. Sure, it decreases the battery life, but certainly not enough to be an issue; it definitely doesn’t require any real design compromise. It’s an almost exclusively additive process, making the thing you wear on your wrist more than just a device for telling the time.

Why can't every watch become a slightly smarter watch?

If it’s a smartwatch, it’s the least capable smartwatch I’ve ever seen. What the Activité actually represents is the new table stakes for a watch, the new minimum for a device that looks like this and costs this much. Watches can already blare sound to wake you up in the morning, so why can’t they buzz quietly? Why can’t I swap bands before I get in the pool and have it track my splits? It’s all clearly possible, and I don’t think it’ll be long before those features are as commonplace as a sweeping second-hand. Rolex, Timex, and Bulgari have all already done the hard part: building a beautiful watch. So did Withings. And it proved that the other half, the technological half, doesn’t require sacrifice.

The price alone will turn off a lot of people, but if you’re willing to spend for a good watch this is certainly a real option. But don’t spend $450 on the Withings Activité because it’s the latest and greatest, or because it offers some new or remarkable functionality, or because it’ll be the envy of your friends. It’s none of those things, and that may be the best thing about the Withings Activité. It’s both deeply technical and not at all so. It feels like a watch you’ll keep and care for, not a gadget you’ll throw by the wayside in a year or two. The only people who notice it will tell you it’s a nice watch, not inquire about that crazy bracelet or computer on your wrist.

Smartwatches have a long way to go before they have mainstream appeal, but a slightly smarter watch? I’m in.