Good morning, and welcome back to The Weekender. Our weekend journey is just now starting, so thank you for choosing us for your travels. As you may recall, this was the 52nd and final full week of the year 2014 on the planet known colloquially as Earth, otherwise known as Terra in other inhabited star systems. It was not a quiet week, as you might imagine. Below you'll find your itinerary, carefully crafted for your pleasure; stories from the week passed and recommendations for the days ahead. Now. Please sit back and relax as we take you on a journey through time and space. You might hear a slight buzzing in your ears as we get started.

Korean-American artist Nam June Paik was considered the "father of video art," as he pioneered the use of video as a means of artistic expression. Paik used portable video recorders to capture and manipulate video for his work, and thought deeply about the relationship between humanity and technology up until his death in 2006. The Asia Society's Nam June Paik: Becoming a Robot is the first new NYC exhibition dedicated to the artist in a decade, and it presents important works from his oeuvre. It's open until January 4th, so see it sooner than later.

It's OK if you don't watch The Interview on Christmas, or ever

The Interview is a certainly important movie because of the circumstances surrounding its release, but the actual movie — the goofy joking between Seth Rogen and James Franco — isn't important at all. Here's why you shouldn't feel pressured to watch The Interview (unless, of course, you're into that kind of thing). 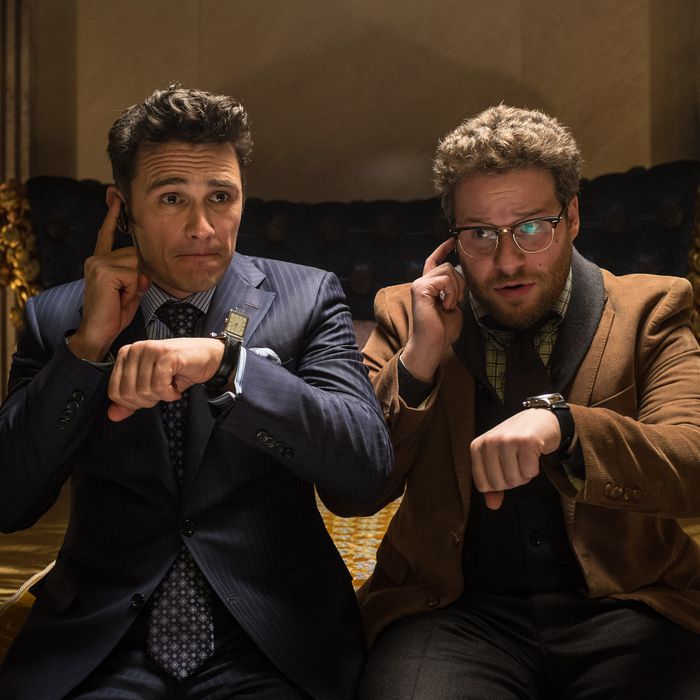 Meet the US Senate's most important anti-environmentalist

Senator James Inhofe (R-OK) believes climate change is a hoax. He's also in line to become the next head of the EPA, which is pretty bad news for anyone hoping that the US will do something to stop it. So just what does Inhofe believe about climate change, and what might that mean for his policies? We break it down based on his recent book about global warming. 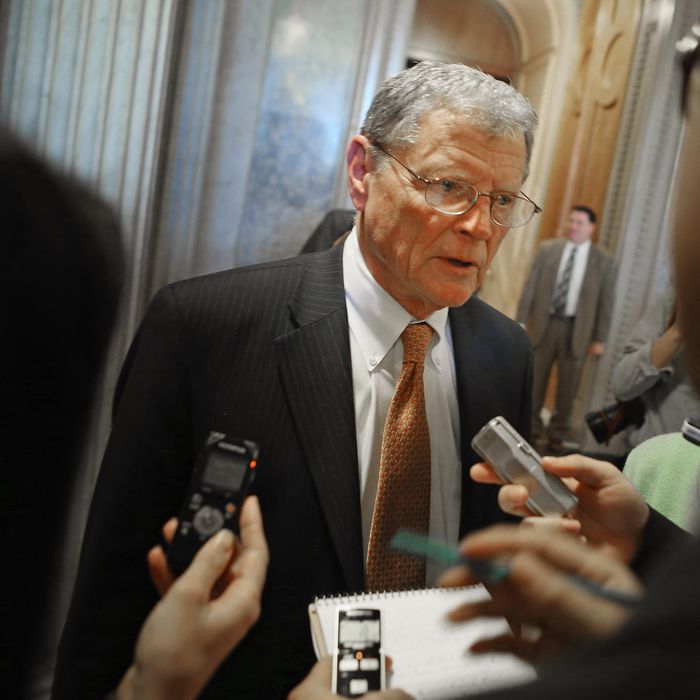 Can a podcast spark the dialogue police and black communities need?

Comedian W. Kamau Bell recorded a long, candid conversation with a retired LAPD officer and published it online last week as tensions around police relations hit yet another high. We spoke with Bell about how he hopes starting open conversations like this can help all communities reach an understanding. 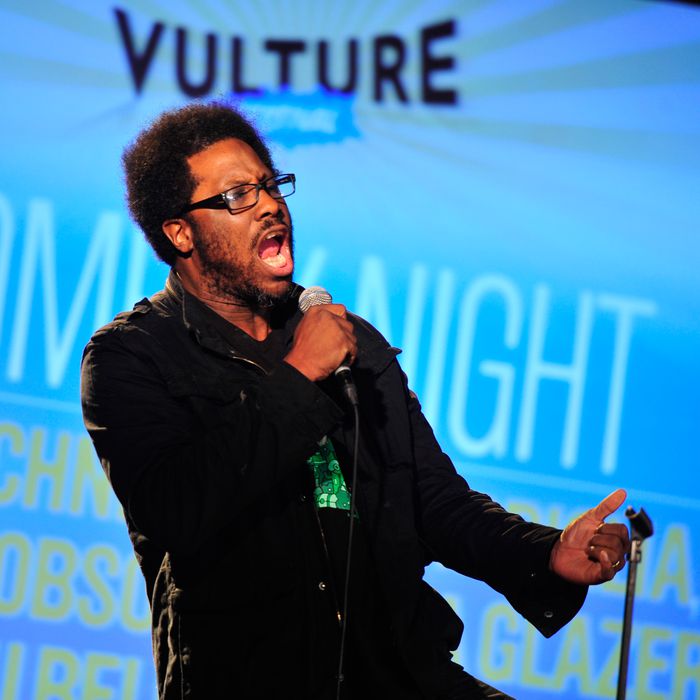 Here's why so many airports have rocking chairs

Airports — those high-stress, short-stay, temporary destinations — aren't an obvious place to put a rocking chair, but their appearance is a trend that's caught on and continued to grow over the past nearly two decades. This is the story of how it all got started. 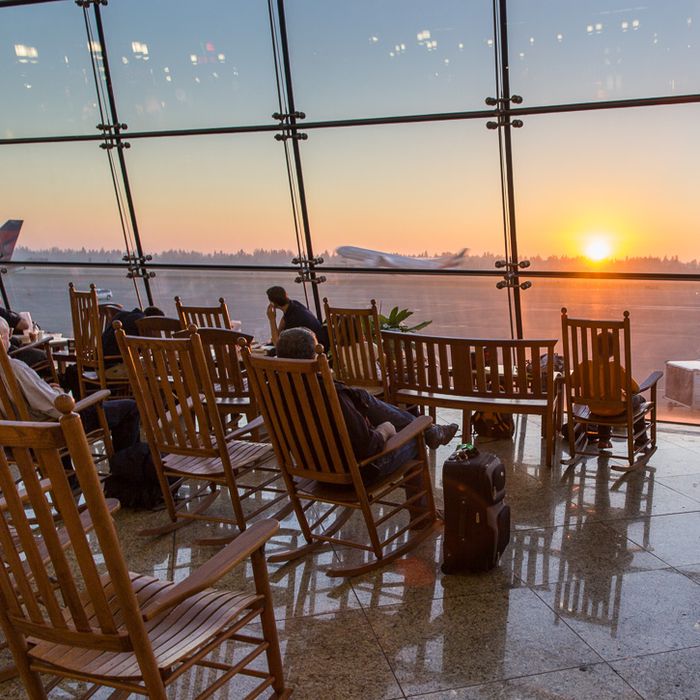 Does an actor have a copyright over their performances, even when they're only a few seconds long? Cindy Lee Garcia is trying to prove that actors do, arguing as much in what could become a monumental court case. But there's a big problem with her argument: granting that copyright could constrain free speech and create huge headaches for companies like Google. 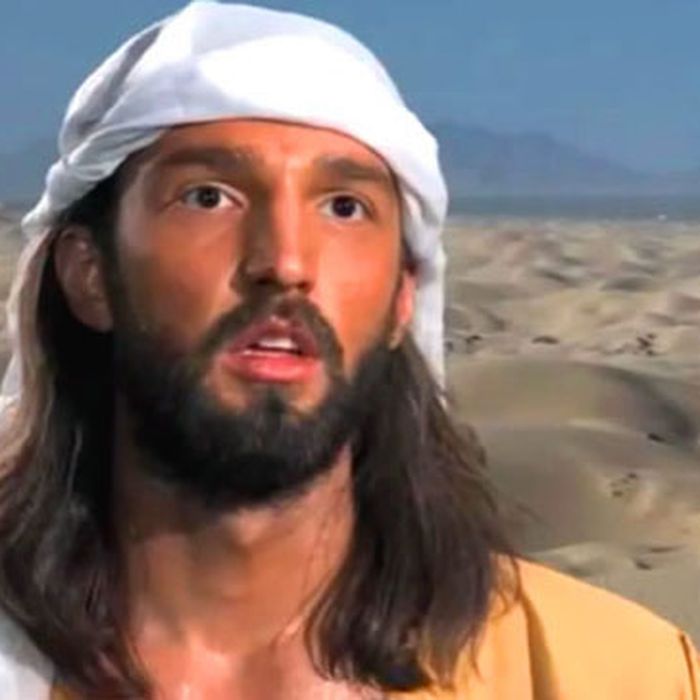 Grantland
Chris Ryan explains the art of the tracking shot and his love of Cary Fukunaga's single shot in True Detective.

The tracking shot is the most intense moment of the series. The most fascinating thing about the shot isn’t just that it’s long (it is), or that the shootout feels so convincingly unstaged (it does) — it’s the way Fukunaga’s camera functions as a kind of character in the house. It’s Cohle’s perspective, just heightened. The camera pauses to gaze, to wander, to linger on characters. 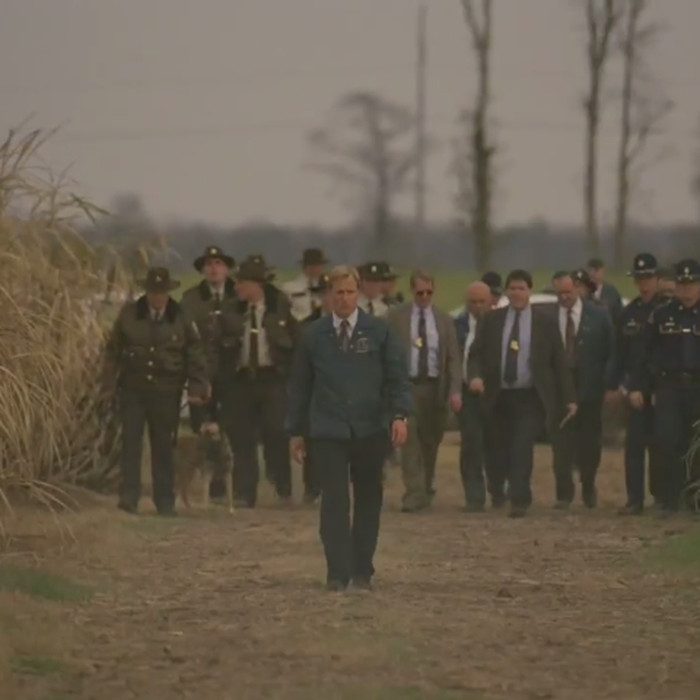 The Tampa Bay Times
Ben Montgomery is investigating the disappearances of young boys at the Florida School for Boys. There's still work to be done.

For more than a century, boys were sent to the Florida School for Boys reformatory in the northern Florida town of Marianna. Many were beaten brutally and bear the physical and psychological scars to this day. Many boys, though, never came home. They died, some under mysterious circumstances. They were buried in unmarked graves, and they were forgotten. Several years ago, a young anthropology professor from the University of South Florida decided she would try to answer the many questions about what happened to these boys and, if she could, return their remains to their families. To get to the truth she would have to fight. 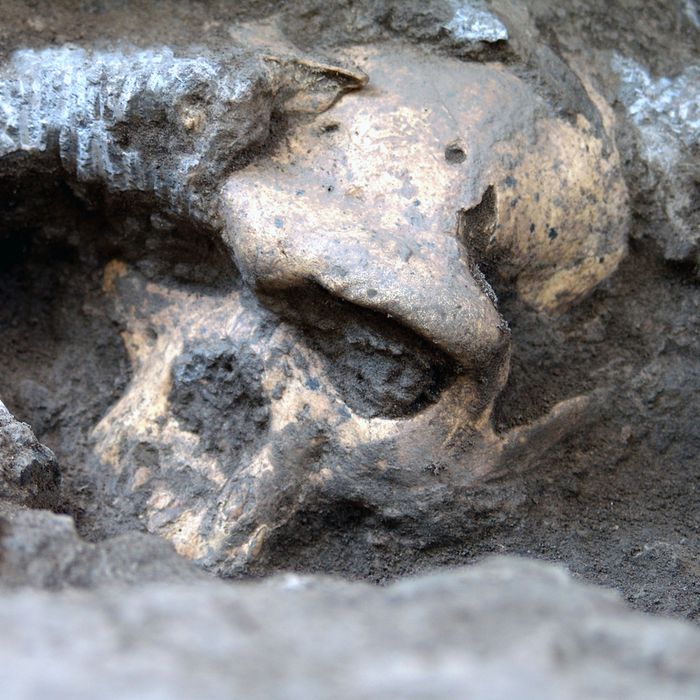 The Dark Side of the Moon

"So how was it? How was...the moon?" You have no further questions. Because he went to the moon. And now he's sitting here, at your table in a dark and crowded DC restaurant. It's disorienting. The moon! The crescent and the eclipse, the waxing and the waning, the cheese—the lunar glow hanging right there, night after night on the periphery of your busy coming and going. No matter what your age, gender, politics, nationality, social or financial standing, every single person inhabiting the planet Earth has the same reaction to him. Holy crap, Buzz Aldrin, you went to the moon! 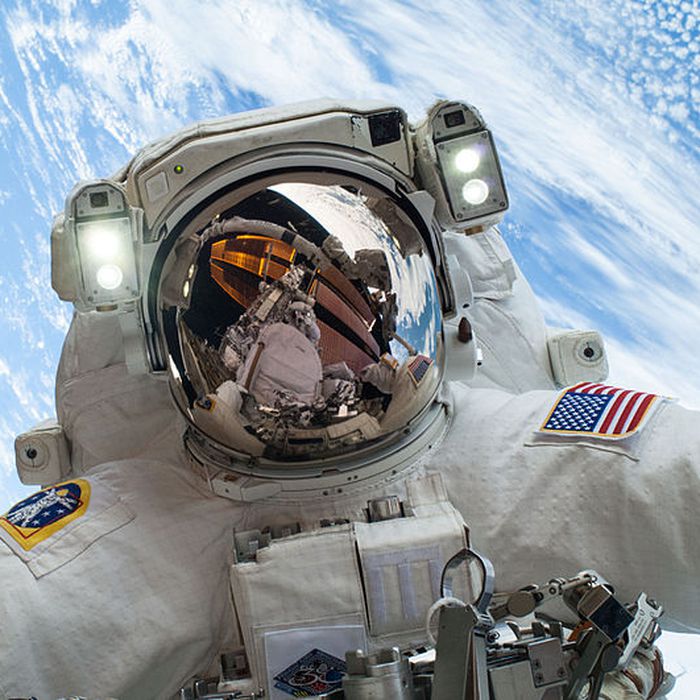 Monsters in the Museum

The Awl
Jacob Mikanowski looks back on the bizarre and grotesque curiosities in Peter the Great's collection.

Peter’s favorite supplier of curiosities was a man named Frederick Ruysch, a master embalmer and the greatest taxidermist of his age, who had mastered a secret technique for preserving dead bodies and making them look as if they were still alive. He injected their veins with a special mixture of talc, tallow, wax, cinnabar, and oil of lavender. One of his contemporaries observed, "All his injected carcasses glow with striking lustre and bloom of youth; they appear like so many persons fast asleep; and their pliant limbs pronounce them ready to walk." 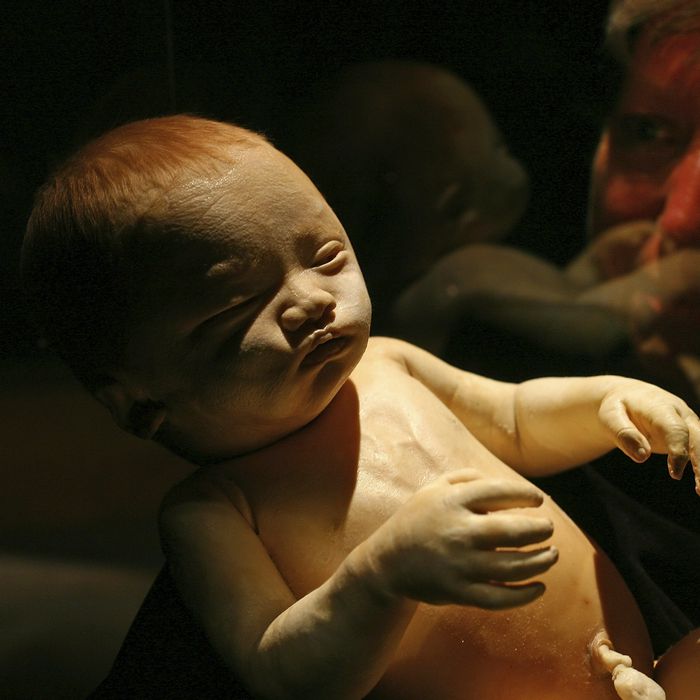 A Brand New World In Which Men Ruled

The New York Times
Jodi Kantor speaks with graduates of Stanford's pioneering class of 1994, who were on the cusp of the internet boom but helped put up walls for women in Silicon Valley.

Every reunion is a reckoning about merit, choice and luck, but as the members of the class of ’94 told their stories, that weekend and in months of interviews before, they were also grappling with the nature of the industry some had helped create. Had the Internet failed to fulfill its promise to democratize business, or had the women missed the moment? Why did Silicon Valley celebrate some kinds of outsiders but not others? 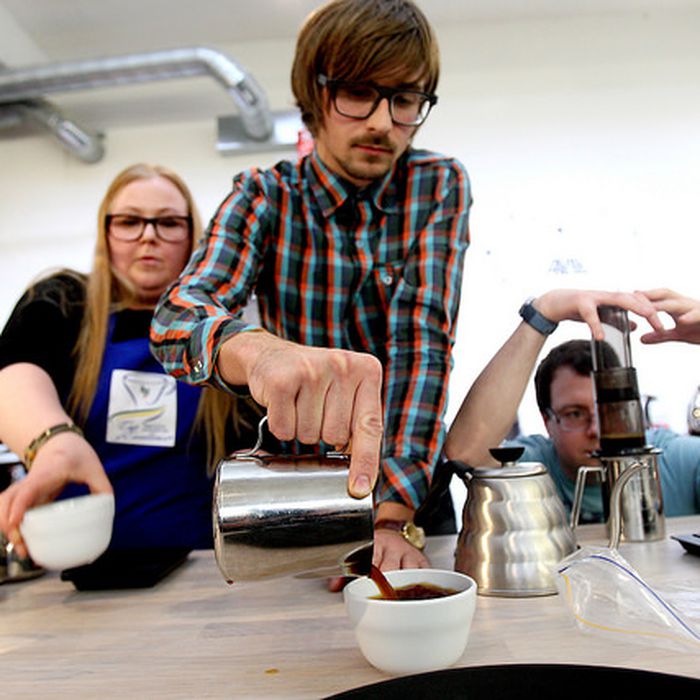 Beyoncé's new single "7/11" just got remixed by Skrillex and Diplo, and the resulting track is completely insane. Give it a listen.

Reply All #6 This Proves Everything

Here's a small change of pace. The episode of the Reply All podcast, which classifies itself as a show about the internet, is all about an online conspiracy among One Direction fans about what might be the greatest secret love affair in pop music. Don't miss this.

January 2nd is only days away, so you only have a few more days to take advantage of this sale. Triple-A titles like Shadow of Mordor are going for 40 percent off, while Thief has a 75 percent off discount. Go go go! 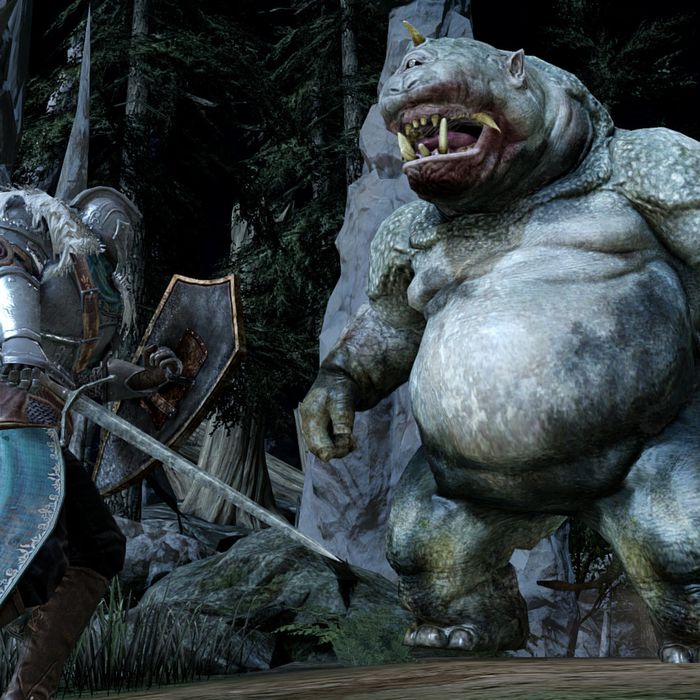 Here's your New Year's Eve movie. If you've never seen Kathryn Bigelow's Strange Days, you're seriously missing out because it just drips with mid-90s techno-paranoia. It's 1999. Ralph Fiennes plays Lenny Nero, an LAPD-cop-turned-black-market-dealer who sells a special disk that allows the user to replay others' most violent, sexual memories. Tech is the future, but the future has started to look like a nightmare as the millennium looms. It's completely batty and over-the-top, but it's fun if you're into turn-of-the-century, thinky sci-fi that isn't The Matrix. And hey, at least it isn't The Interview.