Sony A7 II review: the next great camera, someday

A step forward, but not a giant leap

The camera industry is the most interesting and exciting it’s been in the past 10 years. After capable smartphones decimated the point-and-shoot market, camera makers have focused their efforts on appealing to enthusiasts and professional photographers — those that need or want more than a smartphone can provide. We’ve gotten really great cameras from the likes of Fujifilm, Panasonic, Olympus, and Sony that prioritize manual controls and image quality, while still being more compact and approachable than the DSLRs that dominated the aughts.

In that vein, Sony recently released the A7 II, a compact mirrorless camera that could replace the big DSLR rigs many professionals still cling to. The A7 II is actually a successor to last year’s A7, which blew minds by being the first interchangeable lens mirrorless camera with a full-frame (read: very large) image sensor. The A7 appeared to be everything a lot of photographers wanted: it promised to provide full-frame image quality (namely, better images in low light and greater control over depth of field) in a package that was much more compact than a DSLR.

But for all of the promise and hope attached to the A7, it didn’t quite live up to that in the real world. Limited (and expensive) lens choices, sluggish autofocus, and image quality that was good but not stellar left many wanting for more. The A7 (and the high-resolution A7R and video-focused A7S that followed later) found a niche among owners of vintage manual lenses looking for a more modern body to adapt them to, but they didn’t do much to shake up the full-frame DSLR world.

The A7 II is designed to right many of the A7’s wrongs. (The original A7, A7R, and A7S are staying in the lineup, albeit with lower prices than before.) The $1,699 A7 II ($1,999 with a 28-70 lens, as tested) has the same 24-megapixel full-frame sensor and relatively compact frame as before. It’s a serious camera for serious photographers, just like last year’s model. But this time Sony has quickened the autofocus system, improved the ergonomics and controls, and added an all-new in-body image stabilization system that works with virtually any lens, modern or vintage.

All of those are welcome improvements and address many of the very real issues I had with last year’s camera. A year after the original A7 debut, Sony’s compact wonder has done little to topple the full-frame camera oligarchy ruled by Canon and Nikon. The A7 II is a welcome step forward, but after using it for the past few weeks, I don’t think Canon and Nikon have anything to worry about just yet. 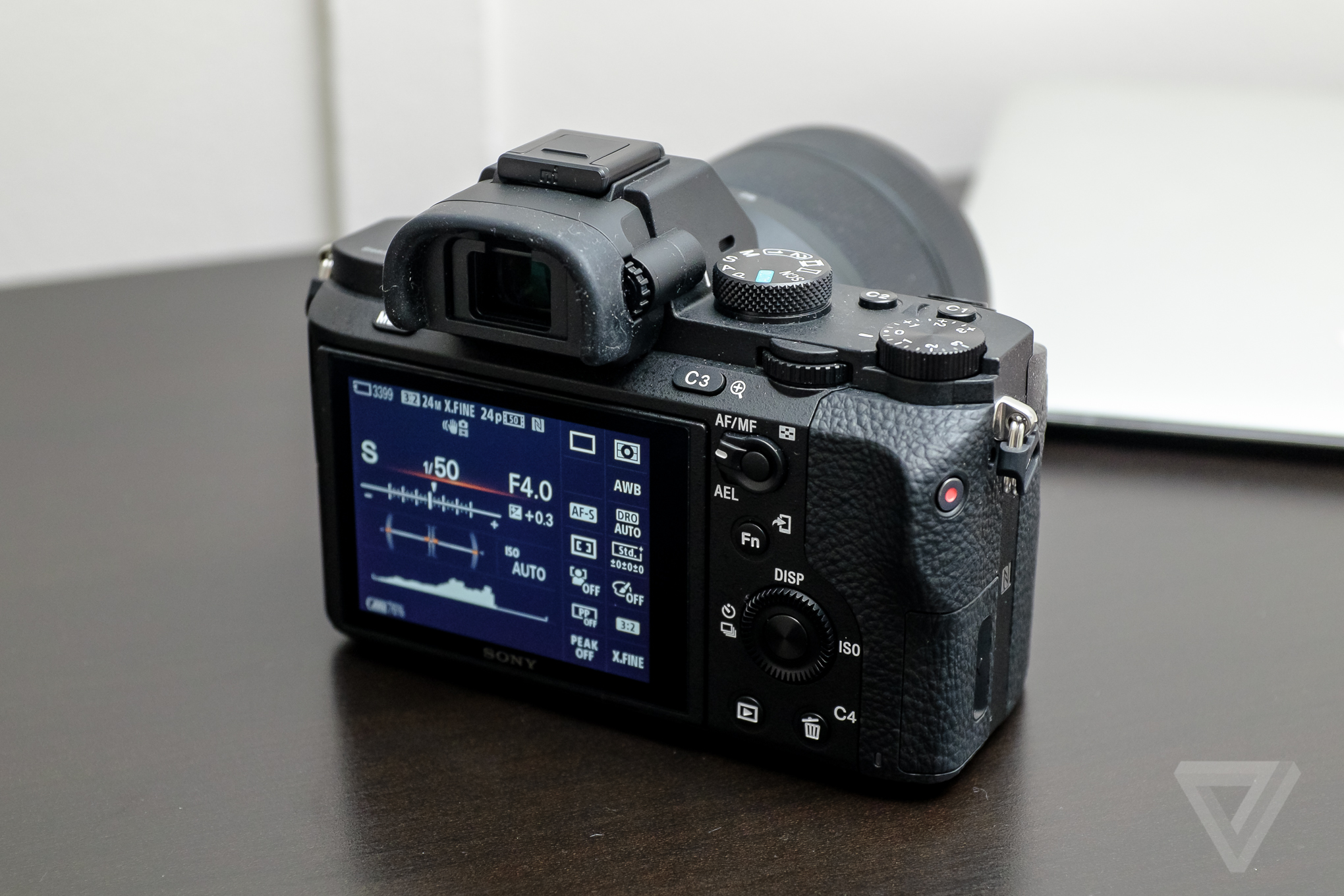 The changes that Sony has made to the A7’s design are fairly minor, but they do improve the camera’s handling and build. The lesser A7 made do with a plastic front plate, but the second iteration is completely metal, which is more befitting of its nearly $2,000 price tag. (It doesn’t make much of a difference in the feel of the camera, however.) The grip has been redesigned with a larger area for your fingers and a more traditional front dial that falls right under your index finger. The shutter button has moved down from the top plate to the grip itself, and there are now two custom buttons in its former location. 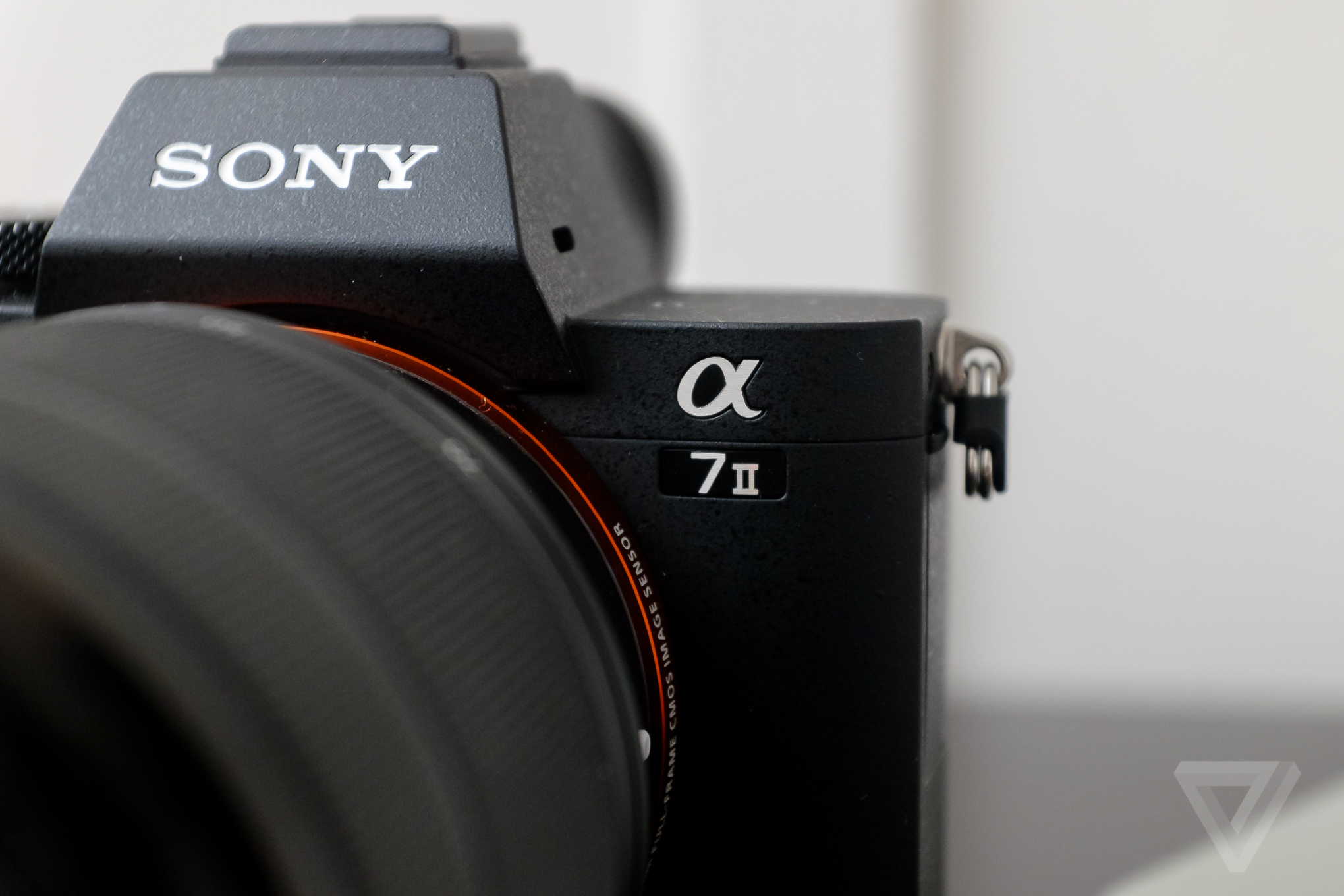 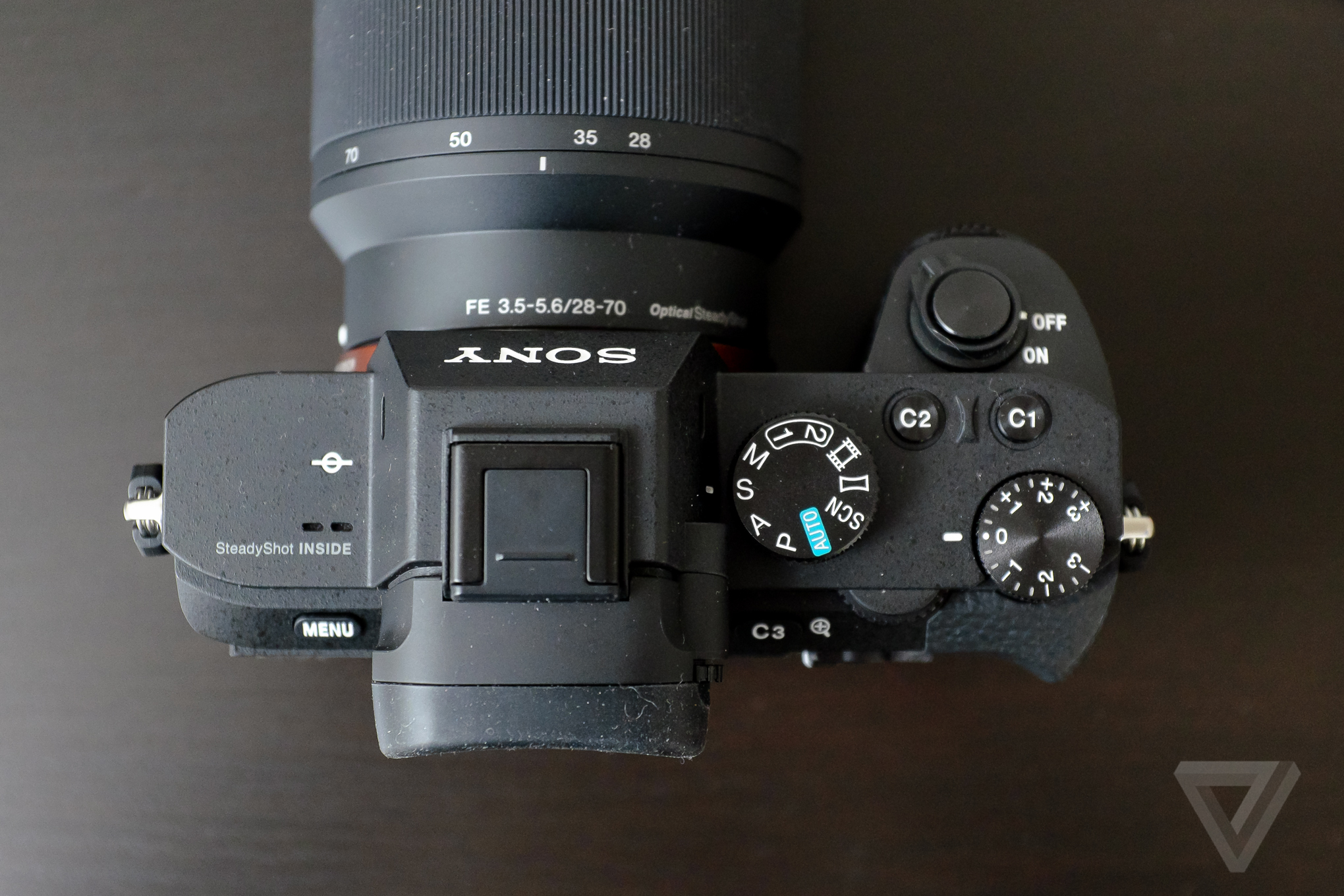 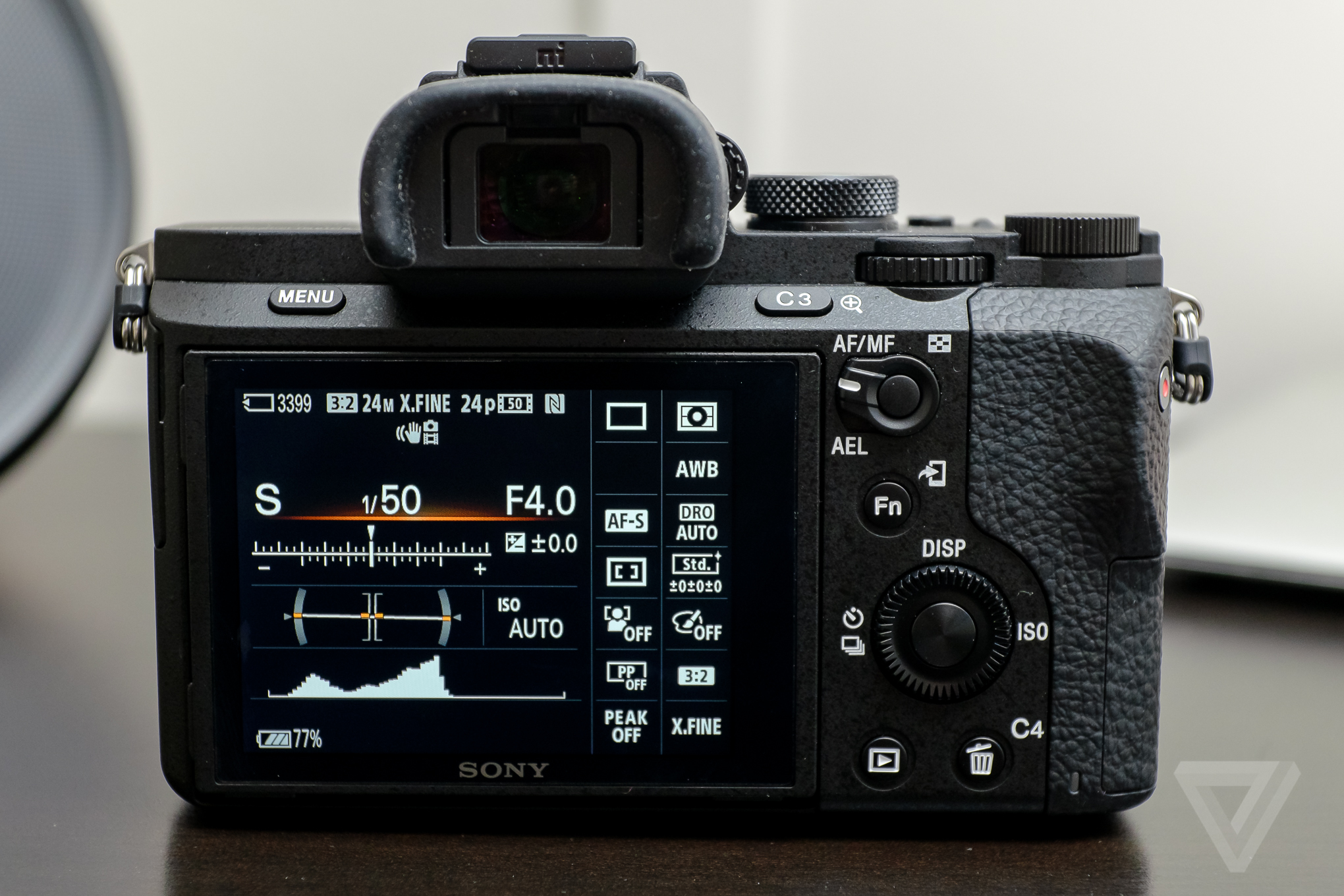 Overall, the camera is nicer and more comfortable to hold, but it’s not hugely different from the first A7. I didn’t really have any problems with the camera’s ergonomics before, and I still don’t now; there are a lot buttons and dials on this camera, and all of the controls I look for are at my fingertips. I can adjust almost any parameter without having to wade through byzantine menus. Most importantly, the A7 II doesn’t get in my way and lets me focus on capturing and composing pictures, instead of fiddling with menus and settings.

Otherwise, the A7 II is almost identical in design to the A7. It has the same throwback manual film SLR look as last year’s camera, complete with a viewfinder hump that proudly displays Sony’s logo. It wasn’t a bad design last year, and it’s still not a bad design — this looks like a camera should look.

The A7 II looks like how a camera should look

It’s worth noting that the A7 II is significantly heavier than virtually any other mirrorless camera, and it’s almost 30 percent heavier than last year’s A7. It’s also about 10mm thicker to accommodate the new image stabilization system. The A7 II is closer in weight to a full-frame DSLR than the average mirrorless camera. It’s a real camera for when you are going to "take pictures," not something that is easily carried around at all times to capture those spontaneous moments.

Aside from the new grip and metal front plate, the rest of A7 II is unchanged: the 3-inch LCD is bright and sharp and tilts when you need it to, the back has lots of buttons and controls, and the viewfinder is sharp and bright with a fast refresh rate. It’s not as good as Fujifilm’s X-T1 larger and sharper viewfinder, but it’s still very good and doesn’t make me long for a true optical viewfinder. Unfortunately the shutter is still very loud and clacky-sounding. It sounds like the camera is tearing apart from the inside out with every frame I snap. It’s not reassuring and means the A7 II isn’t very discreet in quiet environments, such as a baby’s nursery or a church. 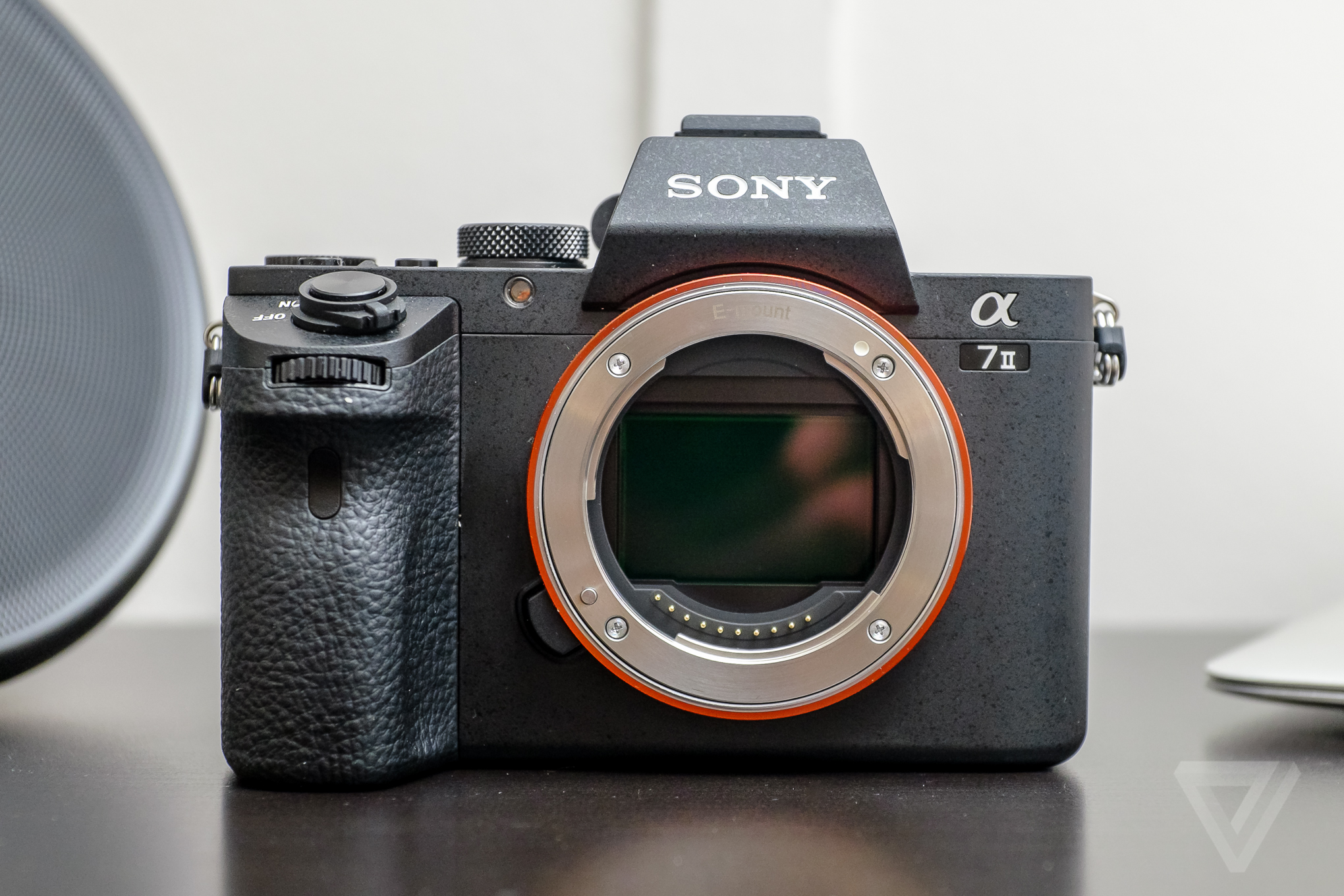 While Sony mostly kept the design and exterior of the A7 II the same as its predecessor, there are some notable enhancements to the camera’s performance. Perhaps most important is a faster autofocus system, which Sony says is 30 percent quicker than before. Autofocus on the first A7 models was sluggish and inconsistent, making them frustrating to use. This time around it is noticeably faster, but it’s still inconsistent, often missing focus. I often had to take multiple frames in a hope that one will be in focus and usable. Though improved, the A7 II’s autofocus is not nearly as fast as other mirrorless cameras, much less a full-frame DSLR. 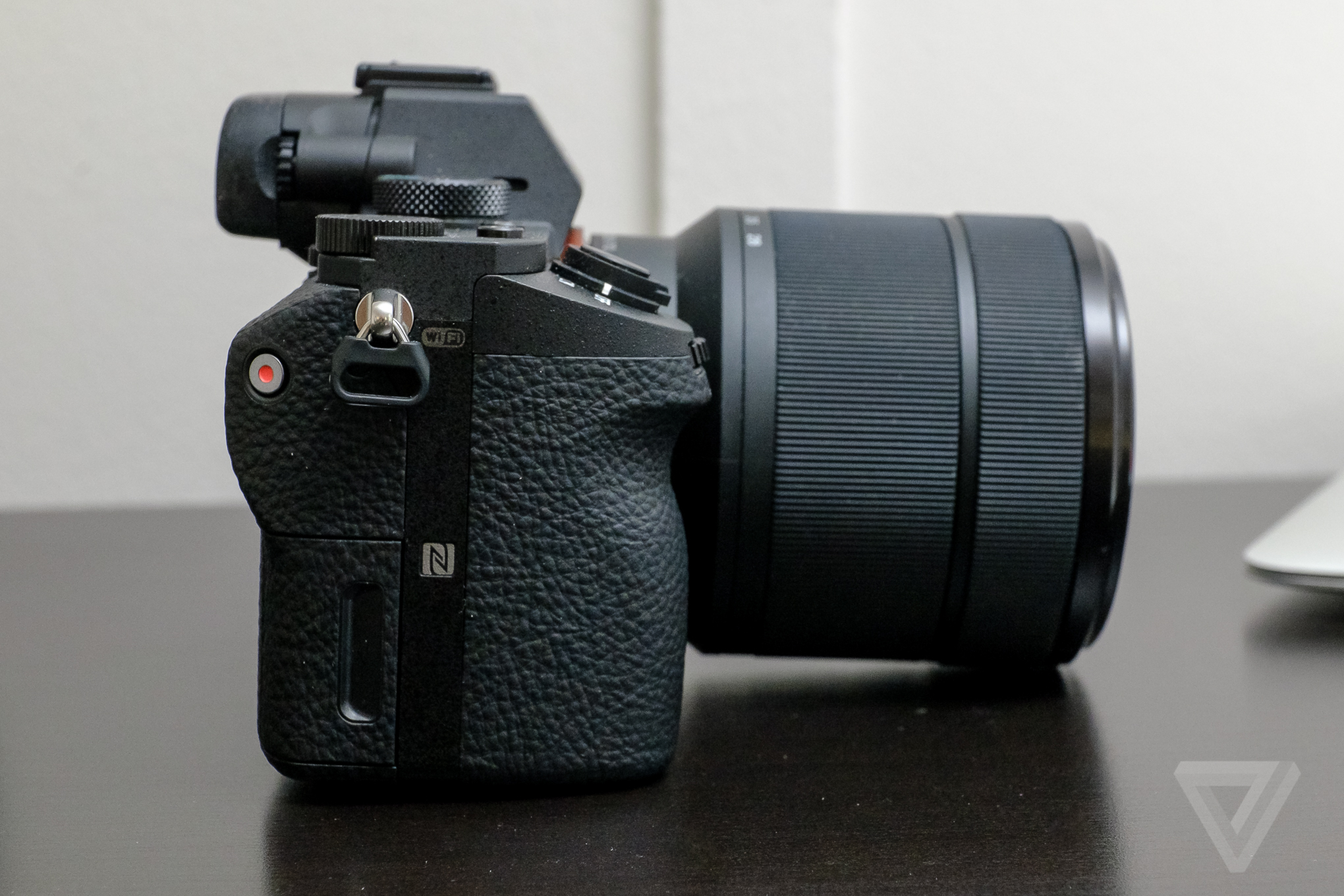 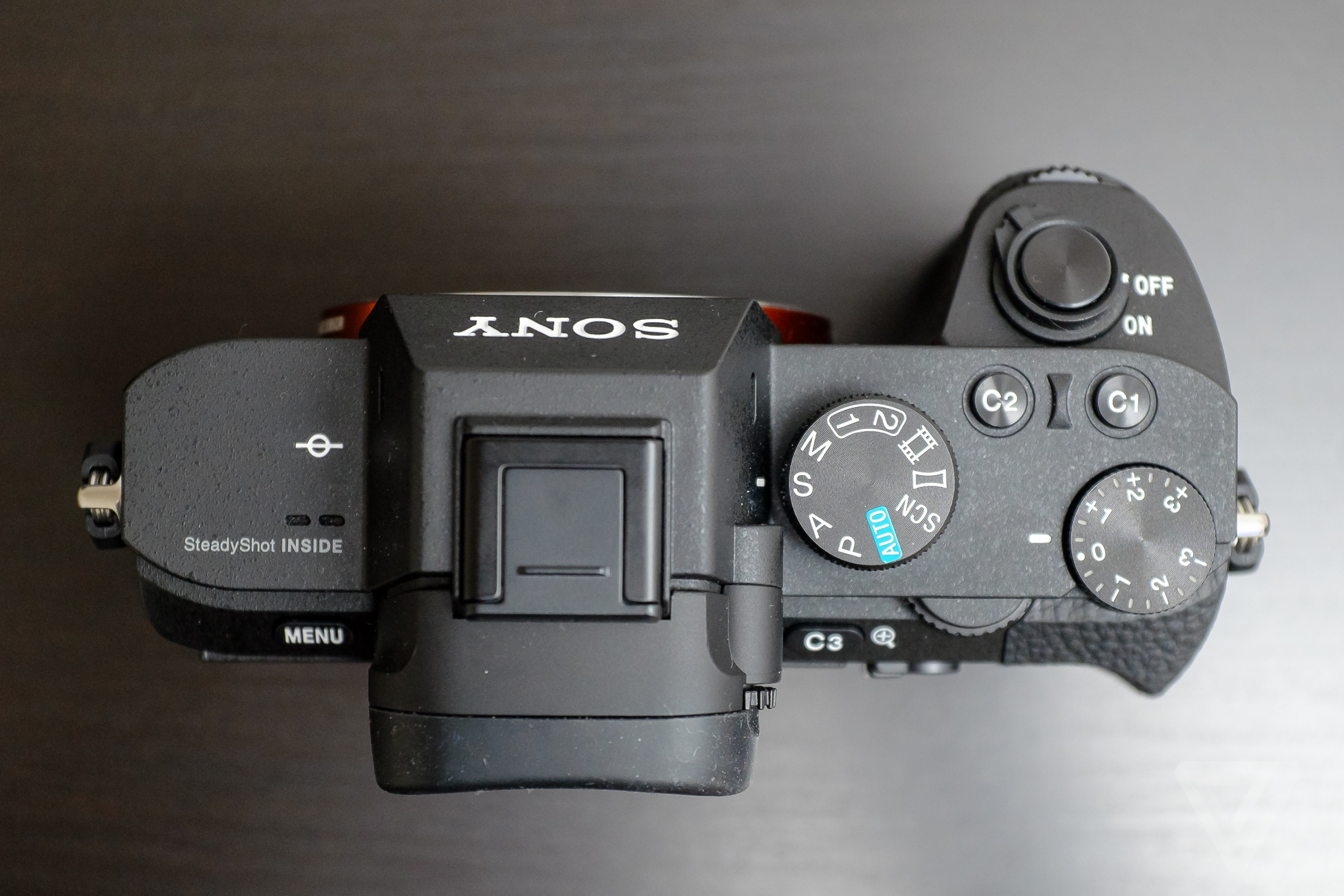 The other major upgrade is the new in-body image stabilization system, which can stabilize camera movement on up to five axes (pitch, yaw, up and down, left and right, and roll). It’s the first image stabilization system of its kind for full-frame cameras and can function with virtually any lens mounted to the camera, even vintage manual lenses used with adapters. If you happen to have a bunch of old Leica lenses sitting around, you can now get the benefits of modern image stabilization when they are mounted on the A7 II, which is pretty cool. Sony says the system provides up to 4.5 stops of compensation, which is comparable to lens-based image stabilization.

The image stabilization system will probably be most useful to those that use the A7 series with older manual lenses, as the lens I tested the camera with already had image stabilization built into it (the camera will prioritize a lens’ system if it is available). Image stabilization helps you take sharper images in low light and with longer lenses, but it doesn’t do anything if your subject doesn’t stay put, a common scenario when taking pictures of kids and pets. Still, it’s a welcome addition and should make shooting with old lenses on the A7 II an easier endeavor.

Even with these additions, the A7 II is rated about the same for battery life (350 shots between charges). It’s still not great — you’ll want a second battery for days where you’ll be using the camera a lot — but you can recharge the camera via Micro USB or an external battery charger, which is convenient.

Also unchanged from last year’s camera is the A7 II’s image and video quality. The 24-megapixel sensor takes exceptional images in good lighting conditions and at lower ISO settings, and the depth of field control you get with the full-frame chip can’t easily be matched by cameras with smaller sensors. Colors are vibrant and accurate, and the automatic white balance is reliable, if not quite as good as Fujifilm’s. Sony's metering system is fairly conservative too, often underexposing images unless I adjusted it manually. But more disappointingly, there is still a lot of watercolor-like smearing and artifacting in images taken at higher ISOs, even when you dial back the aggressive noise reduction. That isn’t much of a problem if you shoot RAW and process later on a computer, but if you want a quick JPEG image to send to your smartphone using the A7 II’s built-in Wi-Fi, you can’t really avoid it. The A7 II can shoot images at very high ISO settings, but whether you actually want to do that remains another matter.

The A7 II can record 1080p video at up to 60 frames per second and uses the new XAVC S codec for better compression and video quality. But it’s not as good as the A7S, which can shoot up to 4K video and with better quality at any resolution setting. Most people probably won’t have an issue with the A7 II’s video, but if you didn’t like the A7’s, you won’t like it here. Serious videographers looking at the A7 line will want to stick with the A7S. 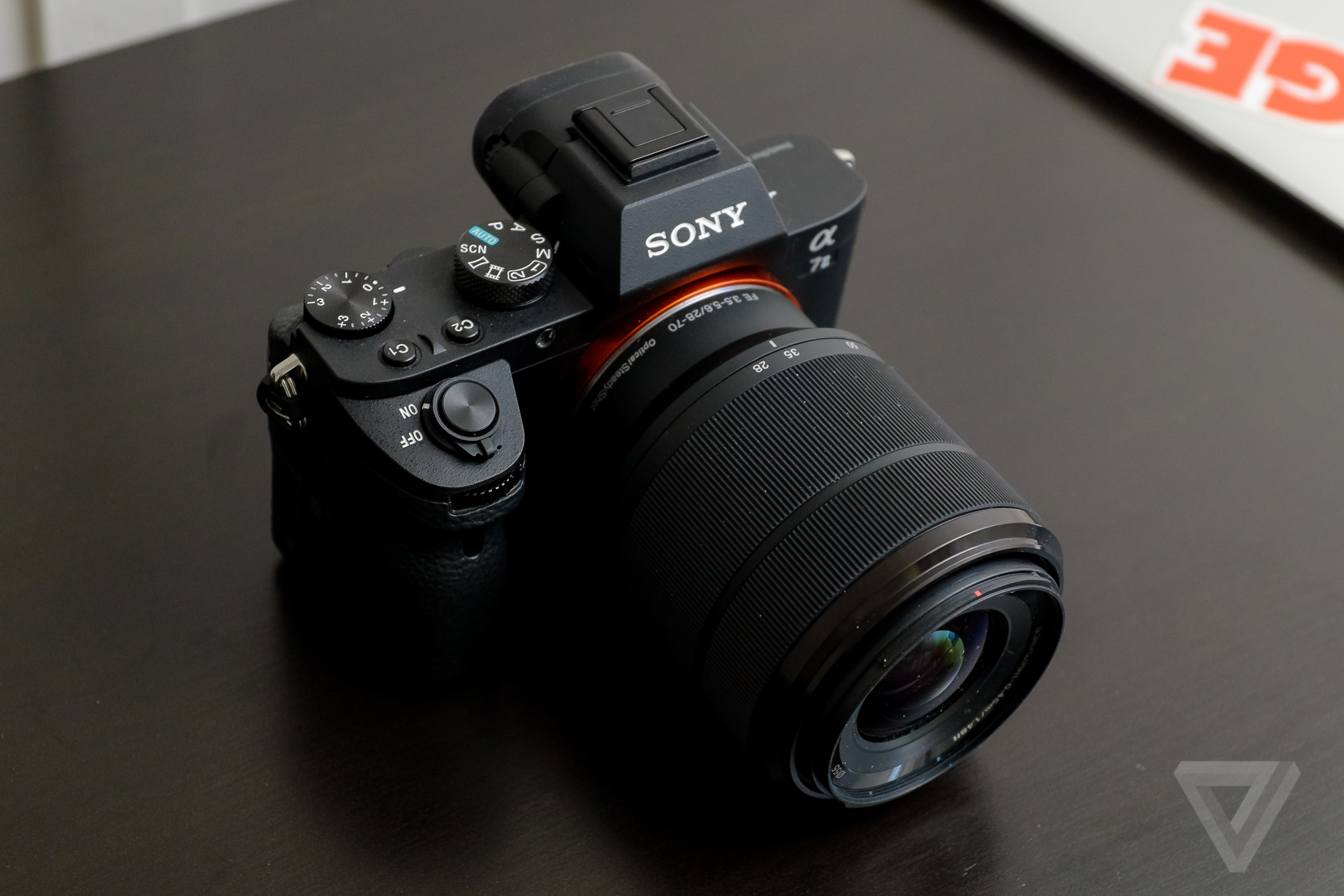 A year ago I compared the first A7 to monumental products such as the first iPhone and the original Ford Mustang. Like those, it was the first of its kind: a camera that could bring full-frame photography and all of its benefits into the hands of more people than large and expensive DSLR systems had before.

Those comparisons still apply to the A7 II: it’s a more compact full-frame camera than any other camera maker provides. It’s also a better camera than last year’s model in a number of ways: it’s faster to autofocus, more comfortable to hold, and works better with old lenses thanks to the new image stabilization system.

But many of the original A7’s faults remain: native lens options are still woefully limited and expensive (Sony offers a paltry seven, and a number of those overlap with each other), image quality at higher ISOs is not as good as other cameras, the autofocus system still lags behind, and battery life is still short. Though Sony improved many things with the A7 II, if you didn’t like last year’s camera, you’re not likely going to be satisfied with this year’s.

If you didn't like last year's A7, you're not likely to be satisfied with its successor

The A7 II will appeal to owners of old manual lenses looking for a modern digital camera to use them with even more so than before — the built-in image stabilization makes for a much better experience when shooting with them. But for those of us looking to build a modern camera rig, there are better options both above and below the A7 II, whether that’s with Fujifilm’s X-T1 and its excellent lens options and fast autofocus, or a full-frame setup from Canon or Nikon that will outperform the A7 II in almost every respect. Sports photographers, portrait photographers, studio photographers, or anyone that just wants a lot of lenses to choose from are still better served by a DSLR than Sony’s A7 lineup.

Last year’s A7 started the revolution, the path that will eventually put DSLR cameras in the rearview mirror. The A7 II moves us along. But that revolution is far from over.