In a world full of multitaskers, it's tough to cut yourself off

Virtual reality is a difficult thing to review. It’s hard not to be impressed when you look into a screen and see a world, magnified to surround you and responding to the motion of your head. It’s even harder when the basic technology is so simple: almost every VR headset on the market is a mobile phone screen with some gyroscopic sensors and a pair of lenses. But when something like Samsung and Oculus’ Gear VR comes out, you can’t simply judge and recommend it like a phone or laptop. It’s a $200 toy, plus an extra $700-800 for the phone it fits around, that promises to contain the embryo of a revolutionary new medium. So the real question isn’t just whether you should buy it right now (because you shouldn’t). It’s whether there’s a future in the ideas behind it.

It might be an early experiment, but the Gear VR successfully turns virtual reality into a plug-and-play affair, albeit one that involves a lot of hardware. The headset comes with a microSD card full of Oculus content that you’re supposed to pop into the back of your Galaxy Note 4, the only phone that’s compatible with the headset. Once that’s done, you slide the Note onto a Micro USB connector that’s set in a hinge on the headset, locking it into place. There’s a transparent plastic screen that fits on top of it, but it seems purely aesthetic, and I usually ended up leaving the phone bare. 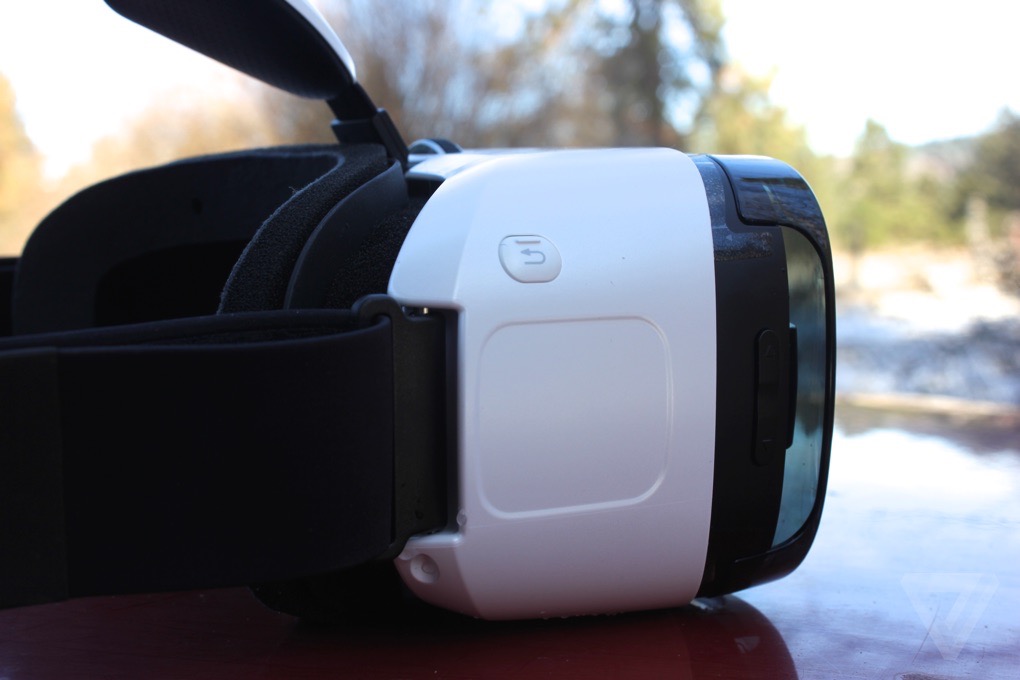 It’s only after you’ve connected that hardware that you’ll be able to launch the Gear VR app, which boots automatically, although I had to install a firmware update to get it running. You can’t actually set up the app in VR — you’ll have to create a user account manually — but once you do, you’re taken to Oculus’ first attempt at a virtual reality interface, which evokes Steam Big Picture Mode or any home console. There’s a library, a store, and a settings panel, where you can reorient the headset and turn on the Note’s camera to see what’s going on outside VR.

If you want, you can connect a Bluetooth controller; indeed, it’s highly recommended, and some games won’t work without it. The default method of interaction, though, is a trackpad on the right side of the headset, which can detect taps and swipes while you move your head to point. Using it makes you look like you’re lost deep in thought, constantly massaging your right temple, and it doesn’t always map intuitively to a game’s controls. But short of a perfect solution, it’s an ingenious substitute for moving a mouse or swiping a screen, at least until your arm starts getting tired.

The interface is smart, but you'll always look like you're thinking really hard

There are certainly enough hitches to remind you you’re in an expensive beta program. The Gear VR app will show you notifications when someone texts or emails you, but they’re just ugly gray boxes in the middle of the screen, and they’ll also appear for superfluous, annoying things like app updates. VR doesn’t usually seem to drain the Note’s battery more than a high-end mobile game, but I managed to accidentally overheat it once during a half-hour session. The interface doesn’t let you do anything much more sophisticated than select something and play it; there’s no typing, no searching, and no interaction with the rest of your phone.

More importantly, there’s not a lot to do in it. New content is added on a weekly basis (Temple Run came out for Gear VR last week, and Samsung’s Milk video service launched this week), but you still won’t find more than a couple dozen apps. Developers can’t charge for anything until 2015, so many have opted to include demos instead of full games. Apps like Oculus Cinema will let you play your own movie files in a VR environment, but for someone who’s largely switched to Netflix or other streaming services, that’s not much help. Samsung and Oculus explicitly discourage consumers from buying the Gear VR, and they’re right to do so.

Our September 2014 hands-on with the Gear VR.

Despite this, the Gear VR is dramatically more user-friendly than almost any other VR system out there. Primarily, of course, I’m referring to the Oculus Rift, which can be incredibly powerful and flexible but requires dedication and endless tinkering. But it’s also got a leg up on other simple mobile headsets. Nicely balanced and padded, it’s infinitely more ergonomic than Google Cardboard, with adjustable straps and a wheel you can turn to adjust the focus. While mobile headsets like the Zeiss VR One aren’t limited to one model of phone, Samsung and Oculus have put a lot of work into creating a seamless experience, from the trackpad interface to the fact that you can see exactly how motion-sick a given game will likely make you. Despite its relatively empty catalog, it’s far enough along to show us what using VR might look like in the future — for good or ill.

Oculus and Samsung have raved about the Gear VR’s convenience and portability, but honestly, the most obvious strike against it is its size. The foam-and-plastic headset fits in my messenger bag, and I managed to take it to lunch with a friend, as well as on my Christmas vacation. But it’s like toting around a large, ungainly pair of ski goggles with a fragile plastic cover. It doesn’t feel self-contained, or like something that’s meant to be carried by a normal human being. And unfortunately, it’s hard to imagine it getting much smaller in the near future. Oculus’ ultimate vision is to swap out goggles for something more like sunglasses, but any device like the Gear VR will have to support the weight of a fairly large phone, and all that padding takes up space. 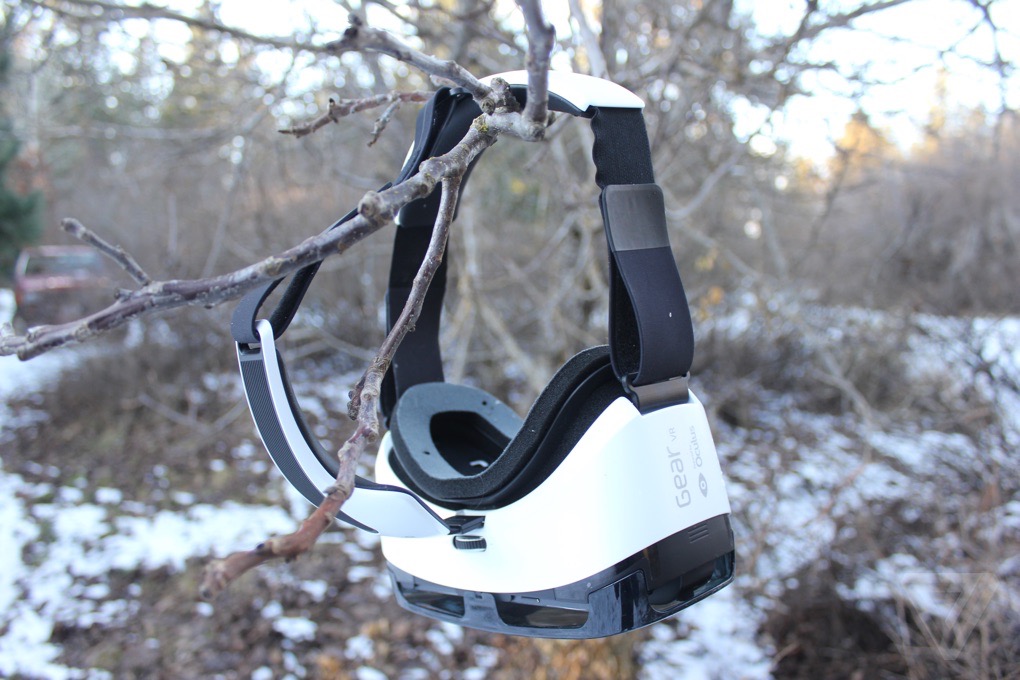 In fact, mobile headsets seem caught between being a casual diversion and a dedicated console. The Gear VR’s screen isn’t high-resolution enough to act as a substitute computer, the interface is still limited, and long gaming sessions can make you nauseous. So its catalog favors short video "experiences," arcade-style titles, and adaptations of mobile games, including Temple Run and castle defense title Romans from Mars. It’s the kind of content that’s great for killing time on a commute, except that this is nearly impossible to do with a super-immersive and relatively bulky headset. Blindfolding yourself on the New York subway system is an automatic non-starter. I thought motion sickness and simulator sickness might cancel themselves out if I tried it in a car, but it just gave me a headache. On a crowded plane, I felt like a freak and an idiot, shutting out the world with an oversized pair of goggles and rhythmically tapping the side of my head.

Just using a phone in front of someone can be considered a faux pas, and VR is so much more than that. Unlike most other headsets, the Gear VR will let you see through it — you can turn on the camera with a couple of button taps. But you’re still giving the impression of being totally walled off, oblivious, and rude. I’m surprised my brief forays outside haven’t prompted a woeful New York Times op-ed.

"casual vr games" are an oxymoron

Alone at home, though, I found myself gravitating towards other media, including longer and more complex games that the simple Gear VR interface couldn’t handle. More than anything, having a headset on hand made me realize how used I am to multitasking — and how entertaining I need something to be before I’ll devote my entire attention span to it. I’ll gladly spend hours playing puzzle games on my phone, but only if I can do it while watching TV or chatting with friends. Even with the pass-through camera option, it’d be hard to watch a VR movie while making and eating dinner. No matter how much it adds to the film, if I have to pick between being truly immersed in a personal screening of Interstellar or being able to see my boyfriend while we’re watching it together, I’ll pick the boyfriend every time.

While screen resolution and precise motion tracking is still an issue, we’re past the era where VR has obvious, horrendous drawbacks, like a tubelike field of view, extreme lag, or an astronomical price tag. We’re even starting to figure out what kind of experiences work for it — the Gear VR’s small catalog is full of good ideas, from tours of our solar system to third-person action games that look like tiny dioramas. Despite this, it’s still not clear how we’ll incorporate VR into the rest of our lives, or how Samsung and Oculus could make it a better fit. Price and size are obvious issues, but we’re also going to have to decide what makes immersion really worth it. Complex puzzle games that require intense focus have justified that tradeoff for me; so have the incredibly creative landscapes some developers have built. But in the end, maybe we’re just marking time until there’s something so great it’s unignorable. At least that way, if you’re wearing goggles, people will know there’s a good reason for it.
7Verge Score