Pop, pop pop pop… the bullets explode into the Chilean prisoners as I’m thrust into the line of fire. My body recoils, but I continue pushing forward until I’m just inches from their fractured faces, frozen with terror. I can't hide. I’m helpless. The feeling is real, even though the scene I’m witnessing is not.

This isn't a game, it's virtual reality storytelling at its best: the Oculus Rift disappears and becomes the medium through which the artist communicates an experience. At its worst, VR is a gimmick, a parlor trick that usurps the story being told. I saw examples of both at the International Documentary Film Festival Amsterdam (IDFA).

Back to back over the span of an hour, I wore an Oculus Rift DK2 to view what IDFA calls four of the "best and most engrossing virtual reality creations to date," none of which are games: Assent, Zero Point, Clouds, and Strangers with Patrick Watson. That's good for me, because I hate video games. Or rather, I love gaming but I hate how my obsessive gameplay disrupts all other aspects of my life. So I quit. Fortunately, the future of VR holds more promise than just immersive gaming.
You can't help but lose your shit

Using the Oculus Rift can easily overwhelm first time users. The experience is so different from anything before it that you can't help but lose your shit; mouth agape, bent into childlike wonder as you reach out to grasp at polygons that don't exist. This was not my first experience, having first tried a prototype back in January 2013. For me, the gee-whizziness of VR is gone, allowing me to focus on the story being told, not the means by which it is presented. For first-timers, however, the medium quite literally becomes the message.

The transition from radio to television was no different. Neighbors and friends would gather around the first TV on the block, amazed by the little man in the box with no care at all for the story he was telling. But then it became common and the television disappeared so that the stories could thrive. This will happen with VR, too. 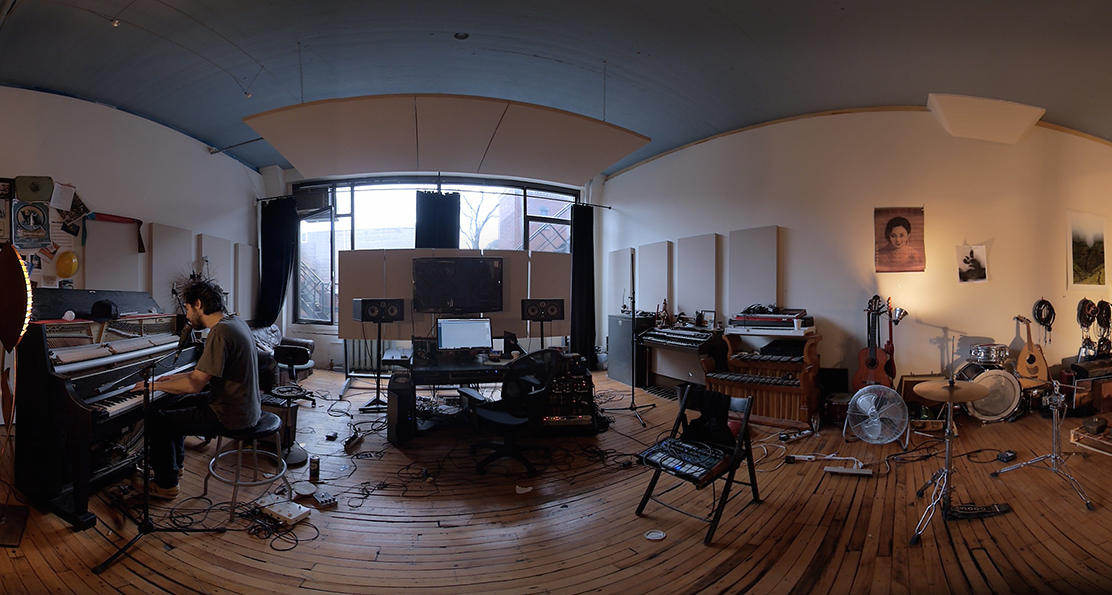 I began my VR marathon with Strangers, Felix & Paul Studio’s… thing. It’s hard to describe in traditional terms because it’s not like describing a film or documentary — there’s no story here. It’s an experience filmed with a 360-degree 3D camera. It’s akin to the genre of Slow TV in the 2D world, video coverage that documents the minutia of everyday life over several hours. Strangers only lasts five minutes, but it lingers in the psyche for much longer.

An assistant carefully, and awkwardly, fits the DK2 to my face while seated in the public screening room. How clean is this, I wonder, as my thoughts turn briefly to the threat of global pandemics. Unfolding an ear, I make a final adjustment to the ill-fitting headphones before the display flips on, transporting me to the center of a room.

I’m invisible, seated between a disheveled piano player — Canadian musician Patrick Watson — and an indolent dog stretched out on a wooden floor. I see pixels everywhere, like what you’d see when standing too close to those massive displays in Times Square. Am I supposed to do something? I think, spinning on my stool in the real world, searching for navigation clues back in the virtual one. After a few minutes I relax and just go with it as Watson lights a cigarette. He's a chain smoker, I think, watching the smoke billow towards me from the well-used pedestal ashtray standing to his right. Why can’t I smell it? The foolishness of the thought snaps the pixels back into focus as I laugh at myself for being tricked. 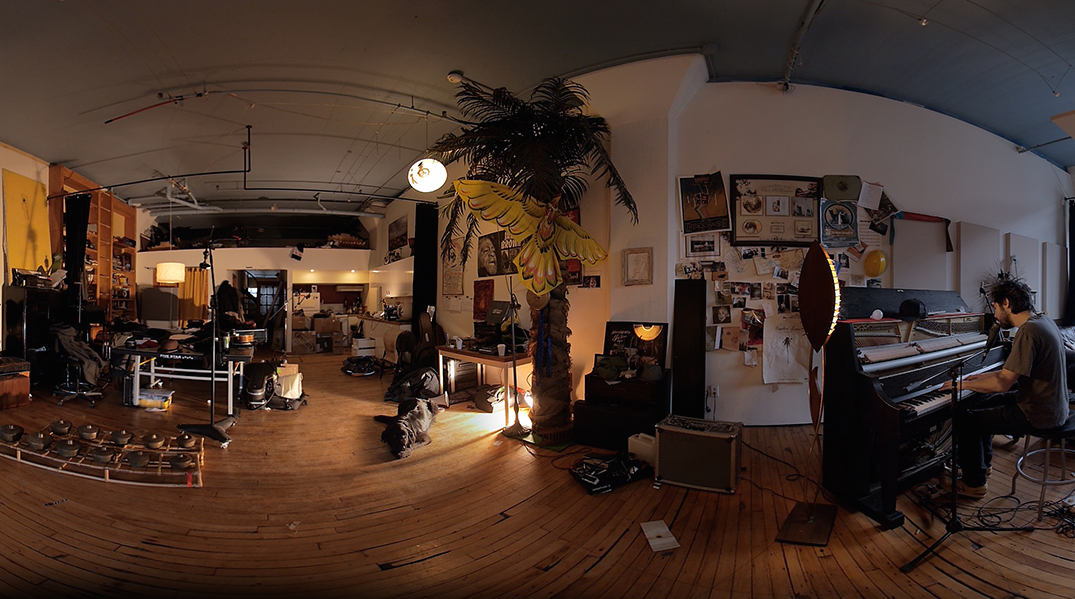 Now keenly aware of what’s real and what’s not, I look around at all the instruments, the furniture, the wall hangings and knick-knacks, as Watson hums into his mic. I begin building a profile of this person, this stranger in front of me. I look out the window, searching for an architectural clue as to what big city this is. Berlin, Seattle maybe, I think, casually deconstructing the silvery Montreal terrain beyond the windows. It’s when he stops playing and stands up that a sense of shame washes over me. Jesus, don’t make eye contact with me, I shudder. I feel guilty for having dared to spy on him for so long. It’s called Stranger, but the intimacy is real.

I was less impressed with Clouds and Zero Point, my experience mirroring that of my colleagues. Clouds now feels like a dated proof-of-concept for both the Oculus Rift and hybrid DSLR and Kinect video capture technique employed. It’s VR as a prop. Zero Point, as The Verge’s own Adi Robertson already pointed out, "isn't particularly revelatory or engrossing as a film." It’s a tech demo for Condition One’s 360-degree footage. Yeah, it was cute to be up close muzzle-to-muzzle with a snotty-nosed bison, but that’s just a gimmick, fun as it was.

For me, Oscar Raby’s Assent, a crudely rendered 10-minute documentary-short developed in the Unity game engine, is virtual reality storytelling at its finest. Instead of recounting Chile’s brutal 1973 coup d'état with facts and figures, Raby puts me in the shoes of his (then) 22-year-old father who was irrevocably changed upon witnessing a military execution — a military he was part of. Using the newfound tools and techniques of VR to focus on empathy, not statistical information, is what makes Assent so powerful.

The first thing I learn upon entering Assent’s virtual world is how to control my movements by staring at visual cues. And by controlling my movement I’m also in control of the story’s pace. Only at the end, at the grand climatic moment, do I lose control of both. As gunfire rings out, I frantically try extracting myself using the same mechanics that brought me here. But now there’s no escape, I’m pulled on a rail directly into the grotesquery of the victims stretched out in front of me and the soldiers firing shoulder to shoulder from behind. I’m forced to witness an historical atrocity from the very nucleus of death.

If this were a traditional documentary, the camera in the tracking shot (aka, dolly shot) would follow along with the moving subject. In VR though, where the camera becomes your eyes, it's something entirely different. "You're not in control," explains Raby, "You're being controlled and that changes the narrative capacity." And he’s right. I felt utterly helpless — the same thing Raby's father felt 41 years before me.

Even the glitchy limitations of the Unity game engine add a kind of abstract terror to the work, causing the convulsing bodies of the prisoners to appear splintered and shattered in eternal repose. But it’s the closeness at which I’m forced to observe them that’s so unsettling. "It's a passive threat," says Raby, "It's a visual trigger that's activating memories in you. Perhaps dead bodies, or gargoyles, or walking through a cemetery alone." Whatever it was from my own past, Raby's Assent exploited it brilliantly.

Our reaction to everything from art to crime is shaped by the complex history of our experiences. Raby tells of an elderly man that viewed his documentary at a film festival in London. "He took the mask off, he was sweaty," recalls Raby. "He looks at me and in a Chilean accent tells me 'you know what, I was friends with one of the prisoners, he was my best friend.’" Raby froze. "My natural reaction, the one that I've learned to expect over the years, is hate. I'm seeing the hate coming at me. I mean it's going to show up in some way: you were part of this, your family. And he looked at me and he hugged me." Raby spent the next hour talking with him about their lives, Raby’s father, and the things they all went through. "So, yeah," says Raby, "all sorts of reactions."

Not everyone comes away so deeply moved. 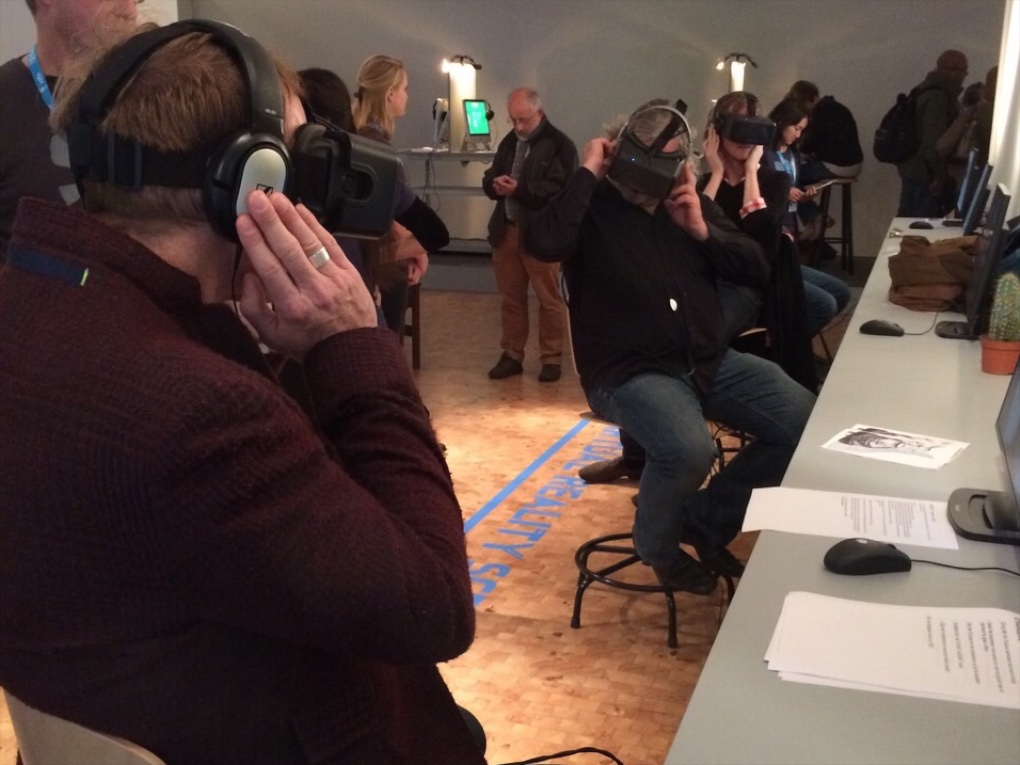 Adele Tulli, a 31-year-old documentarian thought the emotional connection with Oscar's father would have been better told through a traditional documentary format. "It was like playing," she told me, the pink circumference of the Oculus Rift still traced on her face. "Film can be more emotional, more powerful. But it’s an interesting beginning, these are pioneers of a new language." Thijme, an 18-year-old student at the Netherlands Film Academy, dismissed the artistic genre entirely. "VR is more for interactive gaming."

It’s important to note that for both Tulli and Thijme, this was the very first time that either had used an Oculus Rift.

Caspar Sonnen, founder and curator of the IDFA DocLab responsible for the virtual reality show, thinks that VR is inevitable as a medium for storytelling. The only question is the scale of mainstream adoption. "Maybe it'll be mainstream like poetry, where everyone knows what it is but not many people buy it, or like opera, where it's very expensive because the experience is unique and special," says Sonnen. "But it still has to be perfected."

VR in its current state is littered with distractions that can easily defeat the illusion of immersion. These range from the inadvertent tugs on the headset cable when turning too far (something already solved by Samsung's new Gear VR) and the giant pixels seen on media captured by 360-degree cameras to the bulky headset weighed down with over-the-ear headphones. And then there’s the nausea, which thankfully doesn’t affect me.

"striving for the maximum level of immersion is kind of like an inflatable doll."

That’s not to say that virtual reality needs to be a perfect representation of our physical reality. As Sonnen explains, "If we’re talking about telling stories, then striving for the maximum level of immersion is kind of like an inflatable doll." It’s a slippery slope, a kind of virtual uncanny valley that's unlikely to satisfy. "You start with an erotic story, then add a physical body, make it talk, move, and even add heat. But you get to a point of, wait a minute, what are we trying to do here? Wasn’t the book enough to mediate the experience?" In other words, VR doesn’t need to render reality perfectly for the user to get lost in the sense of immersion. Even unrefined representations can entertain and conjure real emotional responses.

Take Strangers with Patrick Watson, for example. "It took me a couple weeks and I realized the experience wasn't leaving me, it stuck with me," recounts Sonnen. "Later someone mentioned Patrick Watson to me and I almost said that I know him, that I met him. But I didn’t. I only met him in VR."

Besides, you've surely enjoyed watching films at home despite the living room windows reflecting on the television screen. Or, you’ve gotten lost in a film despite someone coughing during the meet-cute scene. VR's no different — the act of simply putting on the headset primes your expectations, just as entering a magnificent cathedral prepares you for the experience of a virtual deity.

The last time the consumer electronics industry tried coaxing me into wearing something on my face was with its massive push of 3D televisions. I never got 3D TV; I get VR.

My day immersed in the Oculus Rift has made one thing abundantly clear: virtual reality is a viable form of entertainment. Not someday. Right now. And not just for gaming. VR has made the leap from a fantastical tech demo of first-person shooters to an experiential platform that feels inevitable — a medium through which we’ll participate in new forms of entertainment that are only just now being explored.