Apple Maps has improved since its disastrous launch in 2012, but it's still missing a major feature: navigation options for people who prefer buses, trains, or subways to cars. While public transit directions were considered an obvious addition to Maps for iOS 8, they never appeared, allegedly because of personnel problems and confusion. A patent application filed yesterday, though, shows that Apple hasn't forgotten about the issue. "User Interface Tools for Commute Assistant," filed yesterday, details public transit software that, the patent suggests, could give users directions for traveling either within a city or between cities and regions.

Apple's acquisitions could finally be paying off

The "commute assistant" would share basic features with Google Maps or some of the transportation apps it's acquired over the past couple of years, including Hopstop and Embark, the latter of which offered directions for several major US public transit systems. The interface would allow people to select between a variety of routes to a destination, see estimated arrival times, give information about the status of individual stations or stops, and automatically update directions during travel. The patent also includes options for saving a route, and for selecting a second backup route for a trip, whether that includes the entire trip or just selected stations. Users could also check a specific stop and see all the routes that passed through it, regardless of time, mode of transport, and destination. Sample illustrations show a spot for "favorite" routes, a screen for route advisories, and even information about etiquette and internet access. 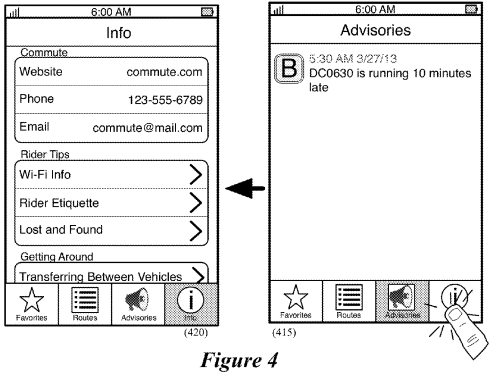 Patents aren't blueprints for a final design, or a promise to build anything — remember Google Glass' infrared ring interface? This patent also strictly details the user interface, not what transportation it might ultimately cover or whether it would be integrated into Apple Maps. But it means that Apple has come up with a reasonably comprehensive transportation interface that it thinks is important enough to protect with a patent, and we might be drawing closer to real public transit options that don't require going to a third-party app.