Finally, a device with two screens that makes good use of both

Hybrid devices are usually a recipe for disappointment. Like the spork, they try to combine the usefulness of two things into one, and, like the spork, they tend to compromise too much. The YotaPhone 2 is a happy exception to that rule. This 5-inch Android smartphone comes with a 4.7-inch e-paper display on its back, which seems like an obvious gimmick until you start using it. I approached the YotaPhone 2 from a position of skepticism, but have been quickly converted: the rear screen can be an effective e-reader, an always-on weather and notification display, a battery-saving gaming screen, and just a really attractive back cover for the phone. I didn’t expect to see any exciting new phones until CES in Las Vegas next month, but the YotaPhone has snuck up with perfect pre-Christmas timing and is now one of the most intriguing devices on the market.

Above all else, the YotaPhone 2 is cool. Within minutes of getting my hands on it, I was telling my colleagues about how I had just placed my first phone call where I dialed with the butt-side of the phone. Then I played a game of chess — rendered in a sharp and attractive monochrome — and I smiled at the ease of it all. I also set my own wallpaper for the electronic paper display and immediately sought someone to show it off to. The YotaPhone does everything you’d expect from a modern Android smartphone, but then goes beyond that with its thoughtfully designed and integrated e-paper functionality.

The chess I played on the rear screen is one of a number of bundled YotaApps — there’s also checkers, sudoku, and YotaRSS — that have been tailored to work specifically on the YotaPhone’s rear display. Company CEO Vlad Martynov announced Twitter integration during the phone’s launch event in London this week, so the app selection is growing, but the phone also comes with a YotaMirror mode that just puts the full Android experience on the back panel — meaning that any app can be a rear-screen app. The e-paper display is obviously much slower and this feels like a function to be used in battery emergencies only, but it’s still a neat addition for when you want to, for example, read an article in the browser without deploying the full-power display. 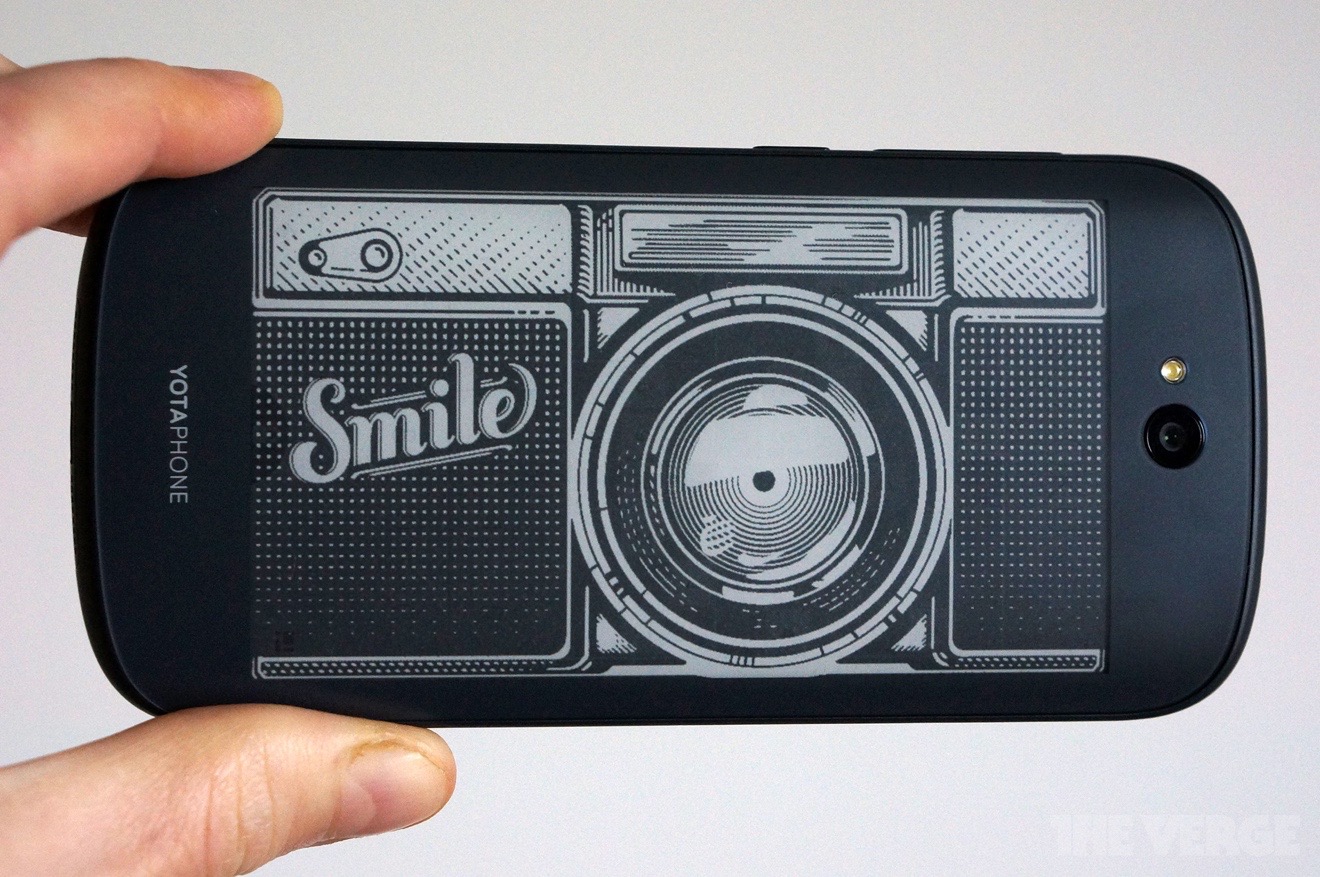 The e-paper display is just a ton of fun

Being able to outsource basic phone tasks to the electronic-paper display feels almost like cheating. I can check notifications and place or receive calls without activating the front AMOLED screen, which, over the course of a full day, should help extend the 2,500mAh battery’s usefulness.

Yota’s software is surprisingly well thought out, though it’s quite unintuitive at first. It took me a few tries before I was comfortable with what every swipe would do and how long I would have to wait for a response from the e-paper screen. It's a capacitive touchscreen, but its responsiveness is that of a typical e-reader and it exhibits some ghosting: faint traces of images and text linger on for a while after the picture has been refreshed. I also notice a few slowdowns and moments of lag when using the regular display, which may be owing to the slightly older Snapdragon 800 chip inside or just imperfect optimization of the software. The good news is that the YotaPhone 2 runs a pretty much stock version of Android 4.4 and will be upgraded to Android 5.0 in the future. 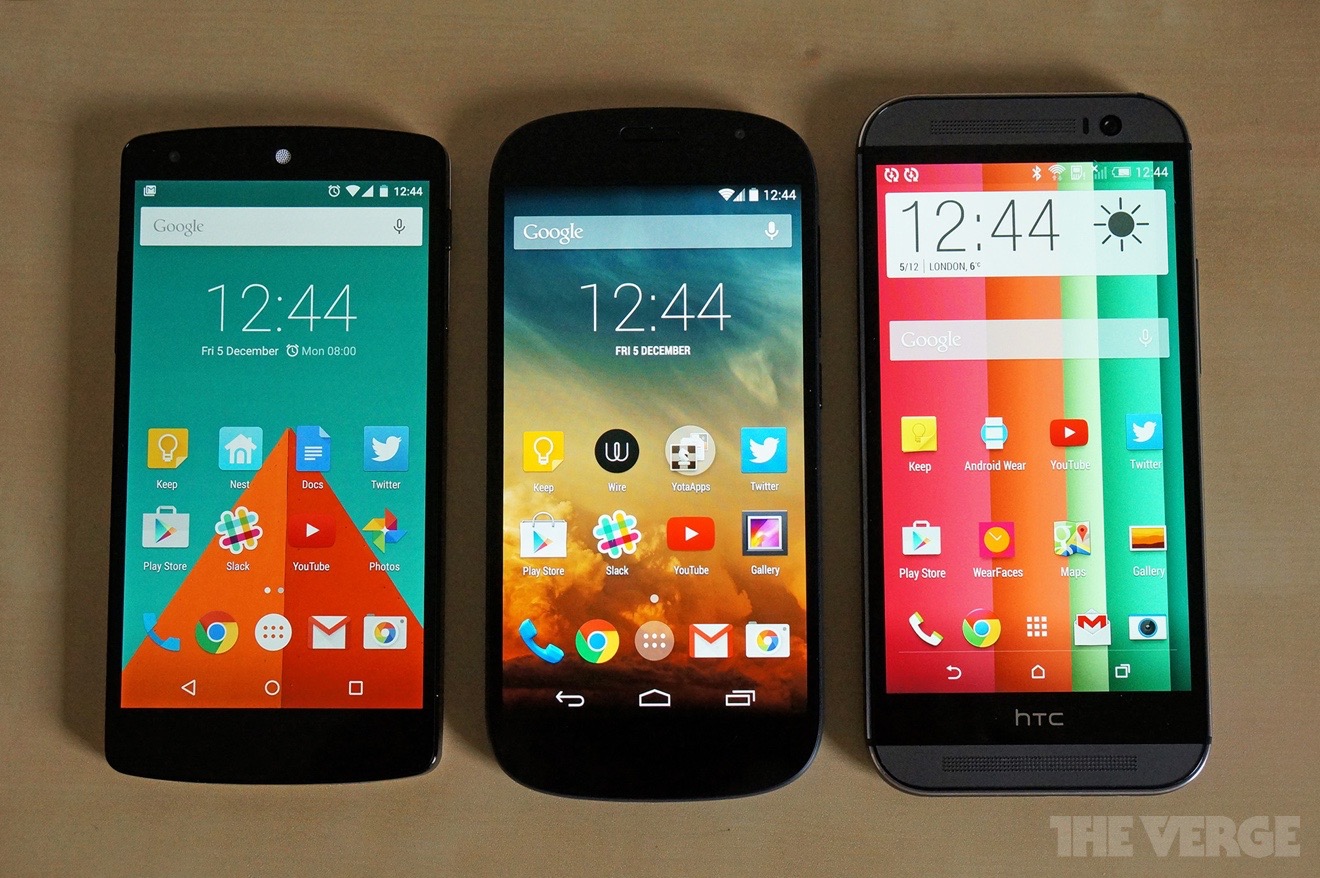 Physically, the YotaPhone 2 is like a slightly smaller HTC One M8 made out of plastic. It has the same sort of all-around curvature that makes it a pleasure to handle, and its grippier material means it doesn’t slip out of the hand as easily as the M8. Yota has used a magnesium chassis inside the phone and reinforced its exterior shell with glass fiber. The result is a rigid, durable device that feels and looks good. The YotaPhone 2’s AMOLED display and general dimensions also remind me of the 2014 Moto X, another well-designed device. Having spent the past month using the utilitarian Nexus 5, I found the YotaPhone 2 luxurious by comparison — it’s much sleeker in appearance and more comfortable in use. The one downside to the YotaPhone 2’s industrial design is the placement of the side-mounted power and volume buttons (the latter of which cleverly disguise the nano-SIM slot), which have little travel to them and feel unpleasantly spongy.

The YotaPhone 2 is expensive, but unique

Like all devices that try to do more than one thing, the YotaPhone 2 has its issues, but unlike the vast majority, those compromises are not enough to quell my enthusiasm. There’s something legitimately new here, and it’s done well enough to make me want to use it regularly. Android phones from smaller companies always give rise to concerns about software updates and future support — it’s not easy being a global distributor dealing with tens if not hundreds of network operators — but the YotaPhone 2 sticks to a stock Android experience that should simplify things and also comes preloaded with the Google Play Store and the full suite of Google services.

The one shortcoming that the YotaPhone 2 will struggle to overcome, though, is its affordability compared to its competitors. Its UK price of £555 is nearly £200 more than it would cost me to buy a Nexus 5 and an Amazon Kindle. In fact, it’s more expensive than an Xperia Z3 plus a Kindle or an Xperia Z3 Compact — the top phone that I’d currently recommend — together with the illuminated Kindle Paperwhite. And yet, none of those combinations give me both the phone and the e-reader in one curvy package that slides easily into my pocket. The YotaPhone 2 is expensive, but it’s also unique.