Gale Crater, the landing site of the Mars Curiosity rover, has long been hypothesized to have once held a large standing body of water. In a teleconference this afternoon, NASA announced new scientific findings which support that claim and also suggest that the lake existed for millions of years — potentially long enough for life to have formed.

Since they landed the rover on the red planet over two years ago, the team behind Curiosity has been able to determine that the base of the crater "had the right ingredients and environment to have been able to support microbial life," said lead scientist of the Mars Exploration Program Michael Meyer. What the team didn't yet know was for how long those conditions lasted. The details released today about the sediments at the base of Mount Sharp imply that the massive crater which surrounds it (Gale Crater measures over 96 miles in diameter) held a lake so large that the presence of water could not have been fleeting. 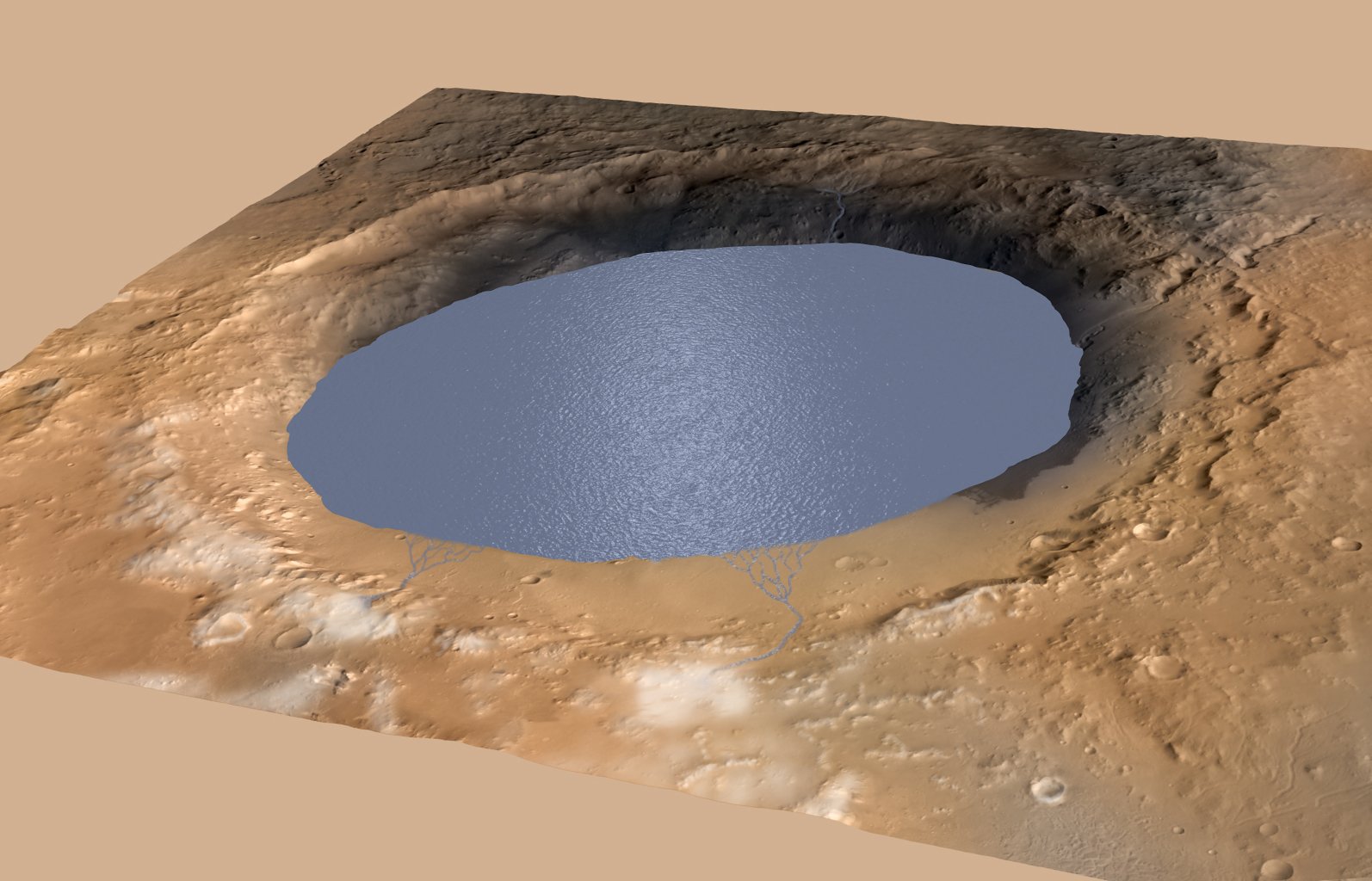 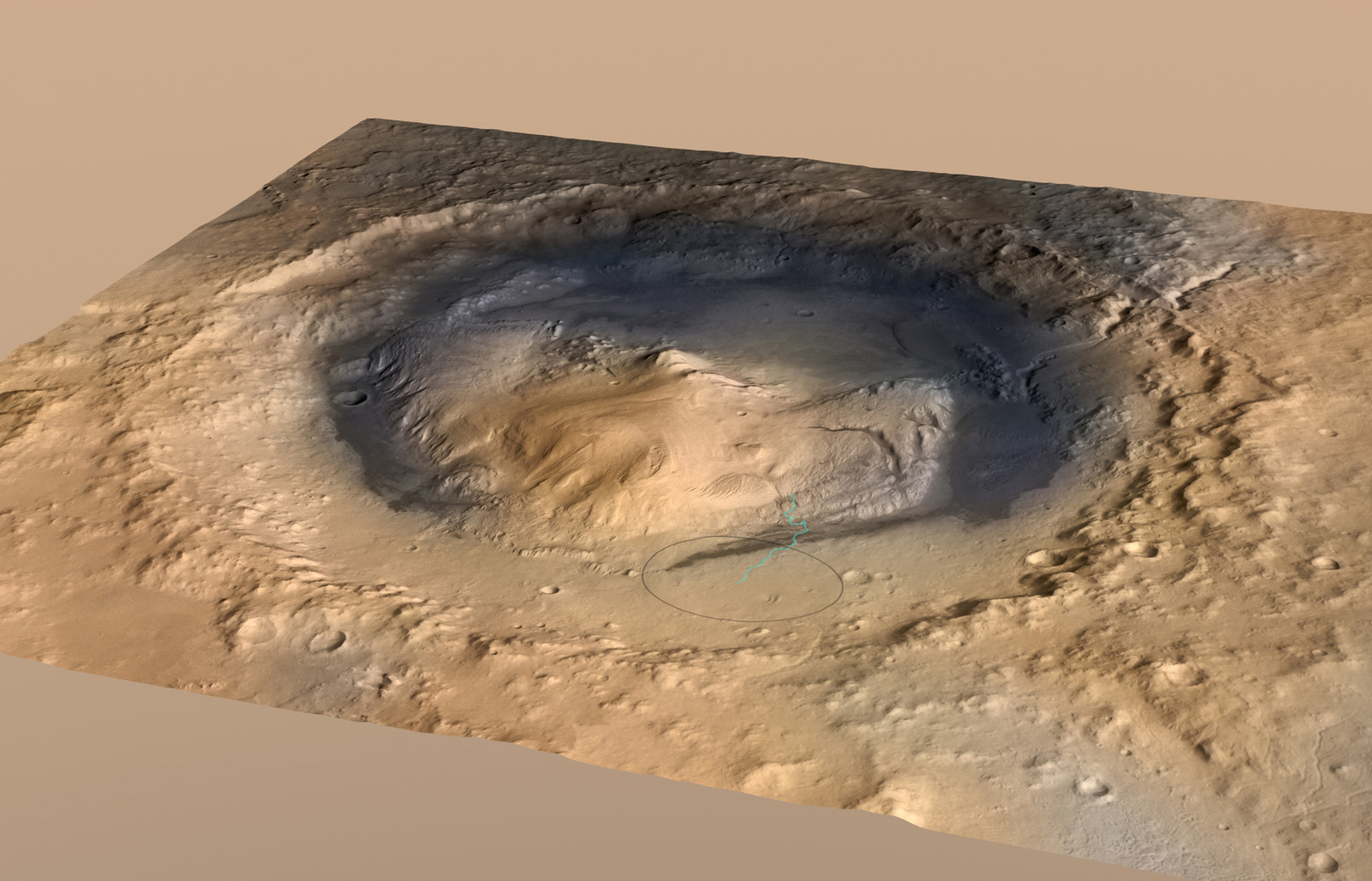 On the left: Gale Crater & Mount Sharp as seen today. On the right: what NASA scientists think it once looked like with water

By using Curiosity's cameras and on-board instruments, team scientists were able to analogize the size, type, and alignment of the sediment layers in the crater to the formation of lakes here on Earth. In doing that, they were able to determine that the ancient lake was around long enough to create multiple cycles of river and delta migrations, what team member Sanjeev Gupta called a "complex collage of ancient environments."

On top of these findings, the directional sediments seem to show that a combination of elements like water flows, wind, and alluvial fans is what helped form the 3-mile-tall Mount Sharp — something that Meyer jokingly called "bonus science." This means that the massive mountain in the center of the crater didn't exist when the crater was formed, which likely happened as a result of an asteroid impact more than four billion years ago.

Perhaps just as important as the evidence of a body of water is what the findings imply about what Mars' climate was once like. For the planet to have supported a body of water this large for millions of years the climate system "must have been loaded with water," according to deputy project scientist Ashwin Vasavada.

Mars "must have been loaded with water"

"To sustain a lake at Gale Crater for millions of years, Mars would need a vigorous hydrological cycle to keep the atmosphere humid," Vasavada said. "The humidity could be explained by expanses of warmer ice at lower latitudes, or even better — by expanses of liquid water, like an ocean." A humid system that lasted for millions of years would help connect the abundance of water scientists now believe might have existed with the polar ice caps which still exist, according to the team.

While the hypothesis that Gale Crater once was filled with liquid water is not new, it was one that NASA was never able to test from orbit — a big reason why this location was chosen as a landing site for Curiosity in the first place. And even though the team had gathered millions of data points from its chemical analyses, it was the rover's images which helped them contextualize the information. The team qualified their findings by saying that we still have trouble modeling our own past and present climates. And it's still difficult to identify the step-by-step process by which life forms.

Following these findings, the next step for the Curiosity team is to begin a new round of drilling in the next few weeks so that more focused chemical analyses can be done. Until then, the rover will continue driving while taking hundreds of images along its path — an equally important part of the process according to project scientist John Grotzinger. "All that driving we did really paid off for science. It didn't just get us to Mount Sharp, it gave us the context to appreciate Mount Sharp."