AT&T is making its shared-data family plans a lot more appealing starting tomorrow. The carrier is slashing the price of Mobile Share Value plans that come with 10GB or more of data; depending on your setup, you could be saving anywhere from $50 or $100 per month with the adjusted plans.

The carrier's Mobile Share plans have long operated the same way: you purchase a bucket of data (alongside unlimited talk and text) to share with everyone on your account, and then pay an additional fee per month to add devices. AT&T recently overhauled its pricing structure to give discounts to off-contract customers and those using the Next early upgrade plan, and now it's making a tweak to make large data plans less expensive. 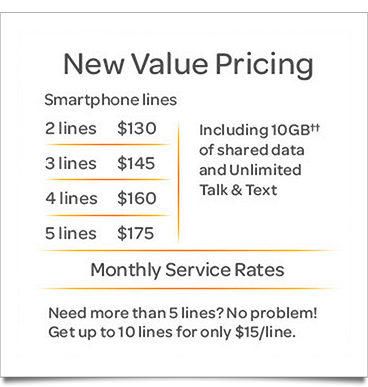 AT&T isn't changing the cost of its data buckets, however. Instead, you'll pay less per line if you have 10GB or more of shared data. With the new plan, you can add an off-contract or Next smartphone for just $15 per line, compared to $25 per line before. Those savings can really add up: four smartphones sharing 10GB of data will cost just $160 per month — that's $40 less than what AT&T charges now. To put things in perspective, under the old pricing structure four (off-contract) smartphones could share 4GB for $175 per month. Now those same phones could get a 10GB plan for $10 less per month.

Significantly, this new pricing scheme only gives a discount to customers who either pay for their phone outright ("no-commitment pricing" in AT&T parlance), bring their own unlocked device (say, a Nexus 5), or use the carrier's Next early upgrade plan. If you want to buy a phone on-contract, you'll still need to pay $40 per line to add a phone to your Mobile Share plan. Tablets, hotspots, and feature phones will continue to cost anywhere from $10 to $20 per month to join a Mobile Share plan.

Taking a look at AT&T's site, it's clear that the carrier is trying to move customers onto its Next plan. Paying $500 or more outright for a new smartphone isn't financially viable for many, and considering the savings AT&T is now offering for going contract-free, we imagine sales reps won't have much difficulty signing up new Next customers. That could be dangerous, as Next could end up costing you big unless you're certain that you need to upgrade to a new phone every year.

The most surprising part of today's announcement is that current customers with on-contract phones can switch to the new pricing structure. Starting tomorrow, you can simply call up AT&T and ask to switch to a Mobile Share Value plan with 10GB or more of data, and you'll drop from paying $40 per smartphone down to just $15. It's a huge savings, and if you're currently on a plan with multiple on-contract smartphones, you'd likely do very well by switching. AT&T says that current customers can keep the discounted pricing indefinitely, but once you decide to get a new phone you'll either need to get one off-contract or sign up for Next. If you decide to get another on-contract phone, the price will jump back up.

"This is about being competitive."

Speaking about the new pricing, AT&T Mobility CMO David Christopher told Bloomberg Businessweek that "This is about being competitive." Most of the major US mobile carriers have shaken up their pricing in the past few months, spurred on by a number of changes by T-Mobile, the fourth-largest carrier in the US. T-Mobile and its outspoken CEO have targeted AT&T particularly aggressively.

Today's move by AT&T brings its family plan pricing far more in line with T-Mobile, which is the only other major carrier in the US that offers a discount for using an off-contract device. T-Mobile is still less expensive than AT&T depending on which plan you need. For instance, on T-Mobile it costs $140 per month to get 2.5GB of data on four different lines (with unlimited talk and text) compared to the new $160 plan from AT&T that offers 10GB of shared data. Verizon and Sprint's plans cost far more per month in comparison, but they include a smartphone subsidy used to offset the purchase price of a new phone. Compared to AT&T's unchanged on-contract pricing, Verizon and Sprint remain competitive. If you're using an off-contract device, however, you'll be much better served by T-Mobile or AT&T.