Microsoft has already built Xbox Music and Xbox Video apps for Windows 8, but the next target is books. A recent Microsoft job listing, discovered by Chinese Microsoft blog LiveSino, notes that the software giant is looking to hire a software design engineer to build "a groundbreaking interactive reading app on Windows, which incorporates books, magazines, and comics." Potential candidates would join the same Music, Video, and Reading (MVR) team that has already shipped two built-in Xbox branded apps for Windows 8.

It’s not immediately clear why Microsoft is building another reading application, but The Verge has confirmed with one source familiar with the company's plans that Microsoft is planning to build the new app. Microsoft already ships a separate "Reader" app for Windows 8, so it’s possible that the company is planning to redesign and rebuild it with Xbox branding. The existing Reader app is a fairly basic viewer with support for PDF, XPS, and TIFF files. Xbox Music and Xbox Video apps run across Windows 8, Windows Phone, Xbox 360, and Xbox One, but it's not clear from the job posting whether Microsoft is also porting the new reading app to its Xbox consoles.

The promise of books, magazines, and comics integration suggests this upcoming Xbox-branded reading app could be the first full example of Microsoft’s Nook investment. The software-maker partnered with Barnes & Noble for a $300 million investment in late 2012, but Microsoft has not yet integrated the Nook services into its own apps in any meaningful way. Aside from a Nook Windows 8 app, the promise of accelerated "e-reading innovation across a broad range of Windows devices" has not yet come to fruition.

Update: enConnected reports that a Microsoft video from November appears to show an early version of the Xbox Reading app, with access to magazines: 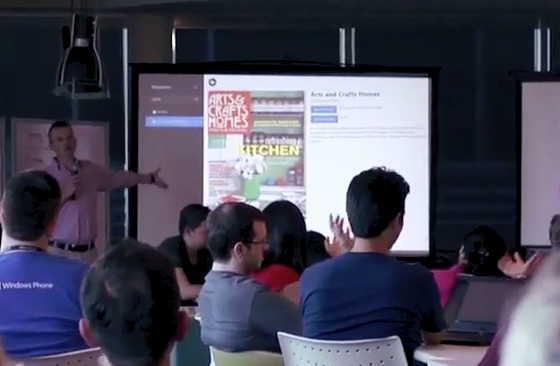