Beyond QWERTY: how Palette's knobs and dials change the way you work and play

Share All sharing options for: Beyond QWERTY: how Palette's knobs and dials change the way you work and play

Most people interact with their computers in the same way, with a mouse and a keyboard. And that's generally true for a wide range of professions and hobbies: photographers, video editors, even gamers. "They all do very specific jobs on the computer, but the main way they interact with the software is through the generic, one-size-fits-all keyboard," explains Palette co-founder Calvin Chu. "I think there's a lot of a value in having something that's customizable, rearrangeable to make a tool that fits the way you work." So he and partner Ashish Bidadi set out to create a solution — a modular, "freeform" control system that snaps together like pieces of Lego.

"This is a cooler way of playing a game than with arrow keys and a spacebar."

The controller, which is available to preorder now, is essentially a series of modules that you can connect together in different ways. There are buttons, dials, and sliders, and they can all snap together to create a completely customized control system. Each module can then be mapped to a specific function: during a hands-on demo with a near-final prototype I was able to zoom in and out in Photoshop by moving a slider up and down, and adjust the tempo of a song in Traktor by twisting a dial. Perhaps the best demonstration came in the form of the space sim Kerbal Space Program — you could use a dial to increase the throttle, and then smack a big round button to launch your ship.

It felt surprisingly good, and much more engaging than just tapping away at a keyboard. "This is a cooler way of playing a game than with arrow keys and a spacebar," says Chu.

Because the modules can be swapped around in a variety of configurations, you can customize them in a way that feels most comfortable. I set Palette up in an L shape, for example, so it fit snuggly with a laptop. But it wasn't always so flexible. In its early days, when it was still just a design project from a couple of students from the University of Waterloo, it resembled something like a tray covered with plugs. Instead of plugging into each other, the modules would snap into the tray. It was a similar idea to the Palette I tried, but much more rigid. "We didn't want to restrict people to a four-by-four grid," explains Chu.

Palette raised more than $150,000 in funding through Kickstarter earlier this year, and the team is preparing to kick off production in the next few months. Whether it's Pebble or Ouya, crowdfunded hardware projects have run into problems when it comes to actually launching on time, but Palette is hoping to avoid some of those production pitfalls with a little preparation. Last year the project was accepted into a hardware accelerator program called HAXLR8R, and that summer Chu and Bidadi spent a few weeks in Shenzhen, China, meeting vendors and learning a bit more about the process. "That was a pretty crazy adventure," says Chu. They've already made a few changes based on the experience, including switching over to a different kind of button that was more readily available. 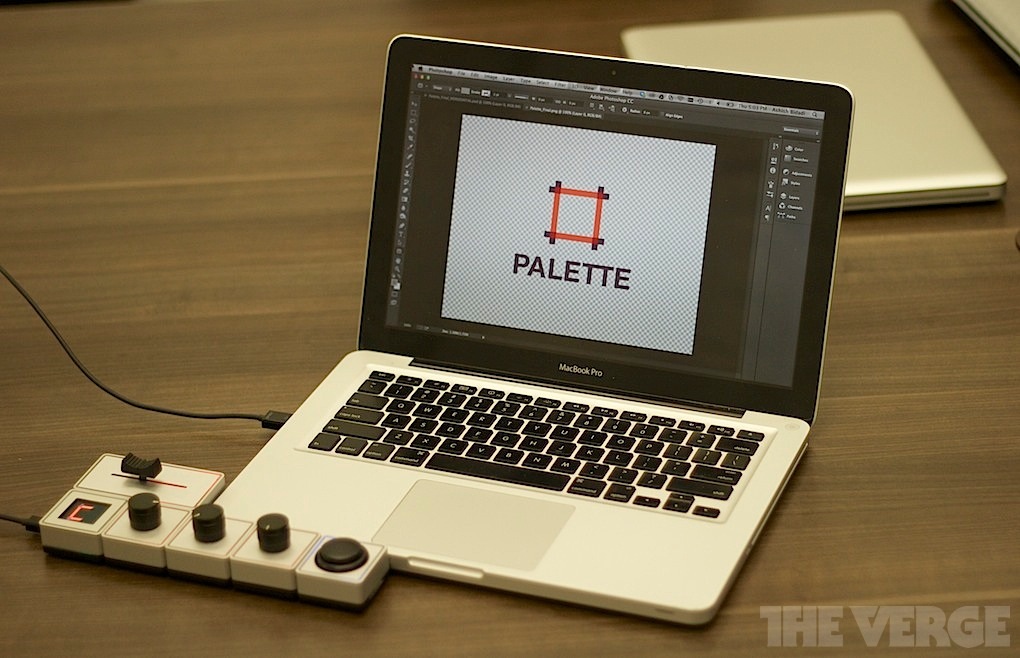 "We didn't expect gaming to be so popular."

Aside from money, the Kickstarter campaign also helped the small company realize just how how many use cases there were for the fledgling controller. "We didn't expect gaming to be so popular," explains Chu. A surprising number of backers were excited about the idea of using the buttons and dials for flight-simulator games, while others thought a customized setup could give them an advantage in Starcraft matches. Even some physicists reached out, inquiring about the idea of using Palette to control sensitive lab equipment. "That was kind of the most exciting part of the Kickstarter," Chu says, "just hearing all of these different, sometimes crazy applications of how people might want to use this." The team is also considering adding new modules in the future, like trackballs and joysticks.

But for now the focus is on finalizing the software and making sure the production goes smoothly for the more than 900 Kickstarter backers, as well as those who have since preordered a kit. (Palette comes in a few different configurations, ranging from a $99 starter kit to a $599 set for pros.) Units for non-backers are expected to ship this fall. With its plug-and-play nature, Palette is intuitive enough that it could be a useful tool for a wide range of people, from wedding photographers to budding DJs. But, at least initially, the team is building with power users in mind.

"We think that the pros are going to like it the most," says Chu.