Microsoft announced its OneDrive rebranding of SkyDrive recently, and it appears the service will soon debut with some new additions. LiveSide reports that OneDrive will offer up to 8GB of additional cloud storage, similar to how Dropbox entices users to share referral links with friends. Microsoft is said to be planning a referral bonus of up to 5GB, which is made up of 500MB for each friend you refer to OneDrive, up to a maximum of 10 friends. OneDrive users will receive the free storage for referrals, and friends who sign up to the service will also get 500MB each. 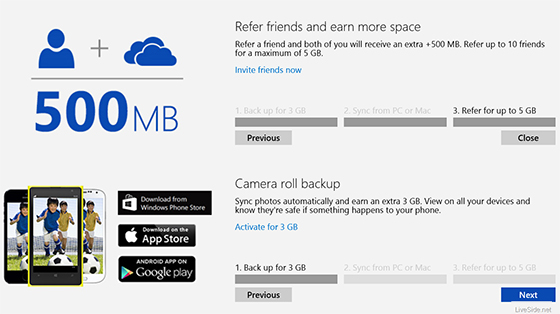 A second "bonus offer" involves extra storage for using the camera roll feature of the iOS, Android, or Windows apps to backup photos to the service. 3GB of extra storage will be applied to any accounts using the camera roll feature, and LiveSide claims both offers will boost additional free storage to 8GB for the lifetime of the account. Alongside the storage offers, Microsoft is also said to be preparing a co-owner folder feature for OneDrive, allowing users to share and edit folders with the cloud storage service. Dropbox also offers a similar feature, and Microsoft has existing share folder support in SkyDrive, but the OneDrive version will sync any shared folders across multiple users as if they're part of an individual's list of personal folders. The co-owner feature also allows any shared owner to add new owners to the folder.

Microsoft simply says the new OneDrive service is "coming soon," but we’ve reached out to the company to comment on these rumors. We’ll update you accordingly.