Bolt for Android offers free calling without messing up your routine

Could this be the iMessage of calling?

Share All sharing options for: Bolt for Android offers free calling without messing up your routine

Free calling apps, such as Viber, Skype, and others, are quite common, but they all suffer from the same fatal flaw: they require you to remember to use their special apps when you’re calling someone on their networks and use the standard phone app when you’re calling everyone else. Plenty of companies have tried to integrate calling into their existing apps, like Facebook and Apple with FaceTime Audio, but those features have generally been difficult to access and have seen little adoption among users. Bolt, a new calling app available for Android today, is looking to fix that problem by combining its free calling service with a full-fledged phone dialer app that can replace your phone’s standard dialer.

The premise of Bolt (which has no relation to the mobile browser of the same name from a few years ago) is simple: you install the app and use it to place all of your calls. It functions very similarly to how iMessage works on iOS devices for messaging. If you are calling another Bolt user, the app will intelligently route the call over VoIP and it will not count against your wireless plan’s minutes. If you call any other number, the app will fall back to your standard wireless carrier and use minutes from your plan. 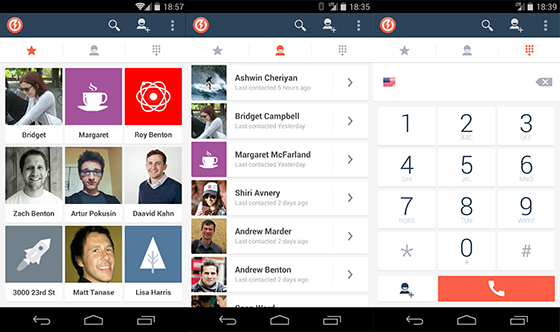 Like other VoIP services, Bolt to Bolt calls promise better voice quality than standard cellular voice calls without consuming great amounts of data. Bolt’s CEO and founder, Andrew Benton, says the average Bolt call only uses about 60KB of data per minute, which would give users almost 35,000 talking minutes on a typical 2GB smartphone data plan.

The app itself is clean and simple, with a three-tabbed design for favorites (which Bolt automatically figures out based on who you talk to the most), call log, and dialer. Other Bolt users will show up with a special icon within the app, making it easy to see who you’re calling for free.

Free calling is just the start for Bolt

Bolt’s promise of free calling may not be all that appealing in today’s world of unlimited calling and texting plans, but Benton says that it’s just the first step for the company. Eventually, Bolt wants to be able to replace both your voice and messaging plans, so you wouldn’t need anything more than a data plan on your phone. Future versions of the service could offer the option of porting your phone number entirely to Bolt and then paying a low, Netflix-style monthly subscription fee for unlimited calling and texting instead of paying the exorbitant fees that wireless carriers charge for the same services.

For now, the app is available worldwide for Android 4.0 and higher and Bolt is working to bring its app to iOS devices next. Many other free calling apps also offer free messaging services and apps across a variety of platforms, including the desktop, which Bolt has yet to implement. It remains to be seen if Bolt takes off in the same ways that Viber and Skype have, but given its goals of being the one phone app you’ll ever need, it has plenty of promise.