The Day We Fight Back: can an internet protest stop the NSA?*

The Day We Fight Back: can an internet protest stop the NSA?*

* Probably not, but it might get a bill passed

On January 18th, 2012, the world’s free encyclopedia went dark. "Imagine a world without free knowledge," said a black splash page, warning users of a bill that could "fatally damage the free and open internet" and urging them to contact Congress. The bill was SOPA, a widely reviled piece of anti-piracy legislation, and Wikipedia wasn’t alone: Reddit, Google, and other huge sites either disabled access or hosted banners in protest. What happened next has become a touchstone for internet activists. Bill sponsor Lamar Smith (R-TX), who a few days earlier had implied that SOPA’s opponents must be profiting from piracy, tabled his proposal almost immediately. Chris Dodd, head of the MPAA, compared the public outcry to the Arab Spring.

It’s been over two years since the death of SOPA. But as attention has turned instead to NSA surveillance, the 2012 protests have provided assurance that online action can create real results. This is the idea behind The Day We Fight Back, an anti-surveillance web protest being held Tuesday, February 11th, in memory of hacktivist and anti-SOPA organizer Aaron Swartz. "In January 2012 we defeated the SOPA and PIPA censorship legislation with the largest Internet protest in history," says the site. "Today we face another critical threat." If anything, though, the reference doesn’t inspire confidence so much as it underscores just how much more complex — and difficult to confront — that new threat really is.

The goal of the 2012 blackout was simple: spur people to call their representatives and express opposition to a new bill. The Day We Fight Back, though, is an attempt to dismantle a system that’s been in place for years. Inside the US, participants are urged to put a banner on their website and call or email their legislators in support of Representative Jim Sensenbrenner (R-WI) and Senator Patrick Leahy’s (D-VT) USA Freedom Act, which would reform the NSA’s metadata database. But they’re also urged to oppose Dianne Feinstein’s (D-CA) FISA Improvements Act, a bill that sounds just as pleasant but has been sharply criticized for enshrining the database program in law. And even these are just baby steps in the long run.

"It's even worse than 'support this bill, resist this one.'"

"It's even worse than 'support this bill, resist this one,’" says Matt Simons of ThoughtWorks, the software company where Swartz worked before his death. "It's 'support this one as a first step, and then do these other things later — more reform — and make sure we block this one." The USA Freedom Act, he says, could "break the logjam" and get reform efforts going, but it’s only a start. "[The bill] really focuses reforms on a couple of narrow pieces, and we've since learned a lot more." The protest is also meant to involve people outside the US, whose concerns about privacy have gotten much less attention than those of American citizens, and to address the NSA’s attempts to weaken encryption standards, an important problem that’s nonetheless fairly abstract to most people.

Beyond the issues, there’s the question of where to actually look for change. "I think we may have gotten the best we're going to get out of Obama at this point," says EFF's activism director Rainey Reitman, "which is why this is the moment to turn the energy and focus it directly on Congress." Where Obama has affirmed basic privacy principles, Congress will have to give them teeth, and reformers must take the intelligence community’s promise of action in some measure of good faith. "The day we fight back" is a perhaps wishfully triumphant name for an attempt to make legislators change something they sometimes seem to barely understand, let alone control.

Simons and others have been part of this effort for months. The Day We Fight Back follows Stop Watching Us, an anti-surveillance project that culminated in an October march on the Capitol. Stop Watching Us, meanwhile, was preceded by Restore the Fourth, which held a series of local rallies in the summer of 2013. But Reitman says the Day We Fight Back is "much more of a digital protest," focused on people whose work and relationships depend on the internet. The protest's shareable web banner is much more prominent than the directory of real-world events, which doesn't list anything in Washington, DC. "The real hope ... is that we can engage that politically aware, slightly more technical community in getting involved in the legislative battle." In other words, exactly the kind of people who killed SOPA, right? Well, not quite. 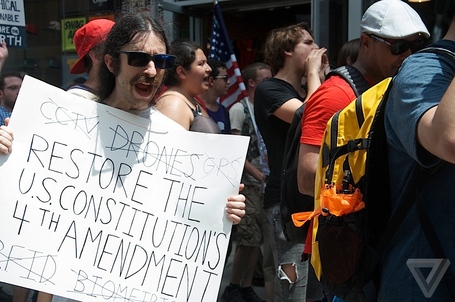 Reddit is one of the over 5,000 sites coming out in support of The Day We Fight Back. So are Upworthy and Tumblr. But so far, the protest hasn’t won the support of huge companies like Google and Microsoft, who helped turn the SOPA battle into a fight between Hollywood and Silicon Valley. (Update: The Reform Government Surveillance coalition, which includes Google, Microsoft, and others, has joined the day of protest.) "SOPA and PIPA presented a pretty clear and pretty dramatic direct threat to day-to-day, business-as-usual operations on the internet," says Simons, while the threat of surveillance is abstract. More than that, "there's something that rings a little bit hollow" about their participation, especially given the information they’ve passed on to the NSA — whether it was done unwillingly or not. "Their initial reaction when the revelations started coming out was, 'Hey, we need the US government to allow us to be more transparent,’" he says. "They never really said anything until very recently that indicated that they opposed the surveillance state."

Reitman thinks that the situations aren’t so different. While Google started its opposition to SOPA months before the blackout, the fight against it and previous bills had already been going on for over a year. Within a few months of the Snowden leaks, though, Facebook, Google, Microsoft, and others had all backed the USA Freedom Act, and they later launched Reform Government Surveillance, which proactively calls for an end to mass data collection. "It's true that they're not necessarily activating their whole networks in the same way, but in other ways, they've actually been pretty engaged on this issue," says Reitman.

The clear-cut and highly successful opposition effort of 2012 can be a difficult bar to top, leading people to dismiss lower-profile protests. "Over the last couple years, every organizing effort has been compared to that," says ACLU counsel Michelle Richardson. "‘Is this like SOPA / PIPA? Are you getting as many people as SOPA / PIPA?'" It’s easier to oppose a specific piece of bad legislation than to take on a broad security apparatus, especially when there’s still significant ambiguity about how agencies like the NSA operate.

Even if the circumstances are different, though, Reitman thinks the SOPA protests laid the groundwork for the Day We Fight Back. "SOPA and PIPA were really a coming of age for the internet as a political body, as a body that was really willing to fight hard for legislative change," she says. "The NSA spying issue is really kind of touching that same community in the same way, because it is that same sense of the government trampling on this very important and valuable resource." If protesters turn out, it will be Congress’ turn to try to address the thorny questions about surveillance and privacy. It won’t be as simple to address as SOPA and PIPA, but ultimately it will be much more important.