Counting sleep: seven nights in bed with the Basis band

Share All sharing options for: Counting sleep: seven nights in bed with the Basis band

I love sleep. I love a comfortable bed and my pillow that cradles my head just right. Sometimes, going to bed is the thing I look forward to most out of my day. Studies have shown that sleep is vital to development, learning, memory retention, and organ health — not only is it healthy, getting a good night’s sleep just makes me feel better. But even though I try to go to bed at a reasonable time each night, I frequently find that I’m tired throughout the day. Am I actually getting the sleep I need?

A whole industry of fitness trackers has cropped up in an effort to answer this question. Fitbit tracks your sleep with the Flex and Force, Jawbone does it with the UP band, and Basis just expanded the functionality of its B1 band to include even more data about your different sleep cycles. Ultimately, the goal of sleep tracking in all of these fitness trackers is to help you get a better night’s sleep and therefore improve your health. But is that even possible? Will tracking my sleep actually give me the information I need to improve my night’s rest?

I spent a week wearing the $199 Basis 2014 Carbon Steel Edition to sleep every night to find out. 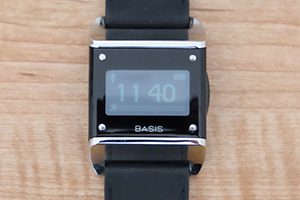 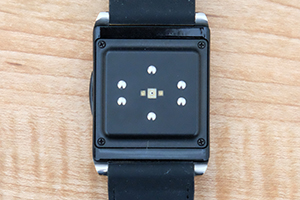 The Basis band is primarily a fitness-tracking device: it looks like a retro digital watch and can track your steps, estimate your calories burned, and even track your heart rate (something many other fitness trackers can’t). It’s a pretty chunky black and chrome thing to wear on your wrist — it’s much thicker than a Pebble smartwatch and dwarfs the Fitbit Force or Jawbone Up. The Basis syncs with Basis’ mobile apps for Android and iOS, as well as a desktop site, so you can see all of your stats and monitor your progress. None of that — except for the heart-rate tracking — is really unique; there are at least a half-dozen devices and services on the market that do similar things.

Many fitness trackers also monitor your sleep, but most don’t do it very well. The Basis has a big advantage over the other solutions, however, as it can automatically determine when you fall asleep and when you wake up, so you don’t have to manually input the data or tell the device you’re going to sleep.

And shockingly enough, it works! In the time that I wore the Basis on my wrist as a slept, it was able to reliably determine when I went to sleep and when I finally obeyed my alarm clock and dragged myself out of bed in the morning. (Oddly, the Basis doesn’t have a built-in vibrating alarm function, which is pretty common among other wrist-worn fitness trackers.) There were a couple of times where the Basis thought I had gone to sleep earlier than I did because I was quietly reading or watching TV while in bed, but most of the time the app intelligently sussed out what was actual sleep and what was watching An Idiot Abroad on Netflix when I synced the band the next morning. 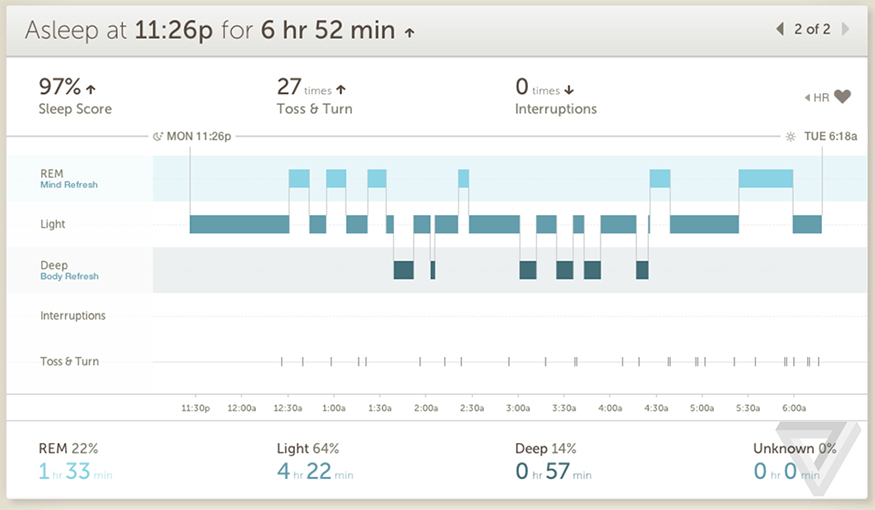 Basis is able to do this by monitoring your skin temperature, perspiration, and blood flow in addition to your movement. The band is smart enough to know when you’re wearing it and when you’ve left it on your dresser, and it won’t mistakenly count idle time as sleep. Unlike other fitness trackers, which primarily use accelerometers to measure your movement, the extra data that the Basis band collects can be analyzed to automatically discover a variety of situations. It can tell not only the point you drifted off and woke up, but how many times you turned over in the night, how often — if at all — you got out of bed, and how long you were in light, deep, and REM sleep throughout the night. The app then takes all this data, crunches it, and spits out a score for how well you’ve slept each night. Naturally, the higher the score, the better you’ve slept and in theory, the more beneficial it was to your body’s overall health.

The Basis apps are equally attractive and informative 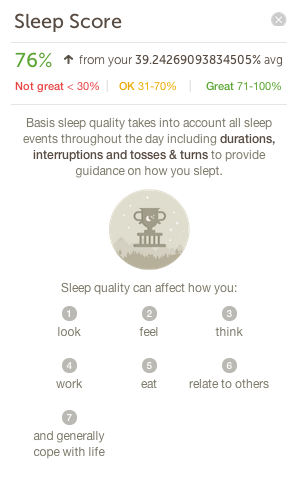 Basis offers apps for iOS and Android, and they are equally attractive and informative, distilling your progress and achievements ("Habits" in Basis-speak) into four different tabs. The sleep tracking is given its own tab within the app, where you can see all of your stats and your sleep score. The Android app offers automatic syncing with the band, while the iOS app will only sync on command. Sleep-related Habits include going to bed at the same time each night or waking up at the same time each morning, both of which are said to contribute to better rest overnight.

I consume a lot of caffeine during the day and still feel perpetually tired, so I was sure that the Basis would tell me I’m not getting the quality sleep I should be even though I’m pretty responsible about going to bed before midnight. As it turns out, the Basis told me the exact opposite. According to the band, I averaged 7 to 8 hours of sleep each night and frequently had a sleep score well into the 90s on a 100 point scale (my lowest score was 76, which is still ranked as "Great" by Basis’ metrics). I tossed and turned about two dozen times each night, and the only times that Basis said my sleep was truly interrupted was when the alarm clock went off and I fumbled around for the snooze button.

The B1 gives me a lot of data, but not a lot of answers

But if I’m getting plenty of good, restful sleep each night, why do I feel so tired during the day? Unfortunately, that’s a question that the Basis band can’t answer, despite all of its sensors and data crunching. The Basis can tell me how I slept each night, but it can’t tell me how to improve my sleep if my score is low, nor can it tell me why I feel tired when my score is high. It also can’t tell me that it was probably the burrito supreme dinner from Taco Bell that kept me tossing and turning, or that my toddler’s crying at 2AM was what woke me up. I can infer those types of things based on my knowledge of my activities and environment, but I don’t need a $200 gadget strapped to my wrist to tell me that. 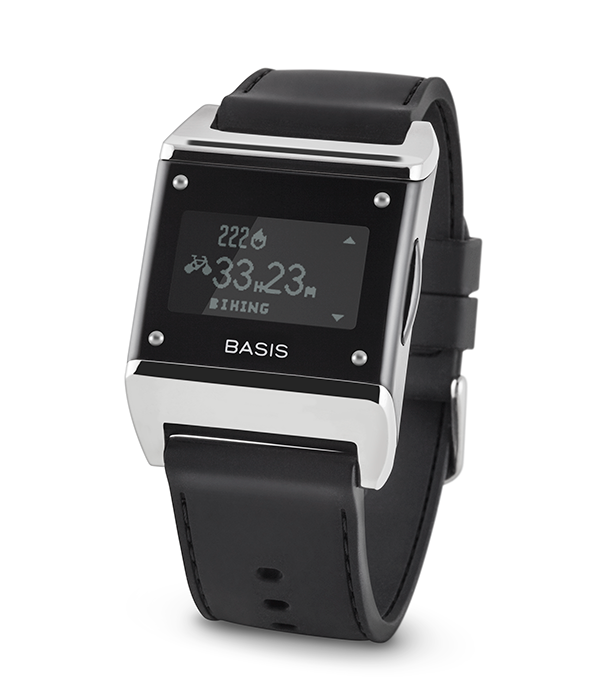 The Basis provides a lot of interesting data for those obsessed with tracking everything about their bodies (and it’s far more data than competing services offer), but the practical benefit for me is actually very little. And for those with sleep apnea and other diagnosable disorders, the Basis doesn’t replace a proper sleep study test in a hospital (for its part, Basis does not claim that its sleep tracking replaces proper medical tests for sleep disorders).

As part of a total fitness tracking program, the Basis system has lots of features and is nice to use, as we found out in our initial review of the device last year (and one of our biggest complaints, lack of a mobile app, has been addressed). The enhanced sleep-tracking features strengthen the device’s pitch, but they still lack the context we were looking for last year. It’s just more data but without the why or the how that makes that data so important and useful.

Lack of context is the biggest thing missing from all of the fitness trackers on the market, not just the Basis band, and it’s clearly the hardest thing to crack. But it’s the most important part of your daily life, otherwise you just have a bunch of pretty charts and numbers without much guidance. The Basis band does a great job of capturing all of the data related to my activity while I sleep, and it’s way ahead of competitors when it comes to amount of data captured. But until it can answer why I’m sleeping well or sleeping poorly, it’s just another data point in my quantified life. I’d love to have a truly intelligent fitness and sleep tracker that can provide me the context I need, but for now, that’s just the stuff dreams are made of.