Is this Microsoft's next Halo?

Titanfall could be the most important game in years. It’s Microsoft’s first Xbox One exclusive stab at the first-person shooter, the best-selling game genre there is. On March 11th, it could become the next Halo, the next Gears of War, at a time when neither of those beloved Microsoft franchises have stepped up. The title has the potential to be the killer app, the system-seller; this one game could potentially give Microsoft the lead in the latest console war.

That’s not just hype. After three hours of playing the Titanfall multiplayer beta, I believe the game might actually have a shot. That’s because, much like Halo when it first came out, Titanfall subtly reboots the first-person shooter genre.

Titanfall features a sci-fi story about powerful corporations and militia forces battling over border worlds, but what you really need to know is this: you’ll be playing an incredibly athletic soldier equipped with a jetpack who can leap high into the air and run on walls while taking down foes, then jump into a giant mechanized battle suit that falls like a meteor from the sky. You feel like an incredible badass whether on foot or encased in an armored shell thanks to powerful weaponry like a "smart pistol" that can lock onto several enemy pilots at once and a giant 30mm chaingun that helps the titular Titans make mincemeat of normal foes.

Titanfall is always a multiplayer experience

Titanfall is always a multiplayer online experience, even in campaign mode, which simply adds narrative and set pieces to the game’s six-on-six multiplayer battles. Those missions don’t feel like tiny skirmishes with just 12 players, though, because each and every match is filled with AI friends and foes — which brings me back to Halo.

In 2001, Halo changed the way first-person shooters were played. Games like Half-Life gave players a finite amount of health, encouraging them to cautiously peek their weapons around corners instead of acting with bravado. Halo’s innovation was a regenerating shield so you could charge into battle, then retreat before you took permanent harm. You felt like a supersoldier, particularly in single-player mode where AI allies would praise your skills and foes would flee from your onslaught. Regenerating health has since become standard for shooters, but there’s one problem: it can quickly devolve into a glorified game of tag, until one player gets lucky enough to escape or penetrate the other’s defenses long enough to fire a kill shot. 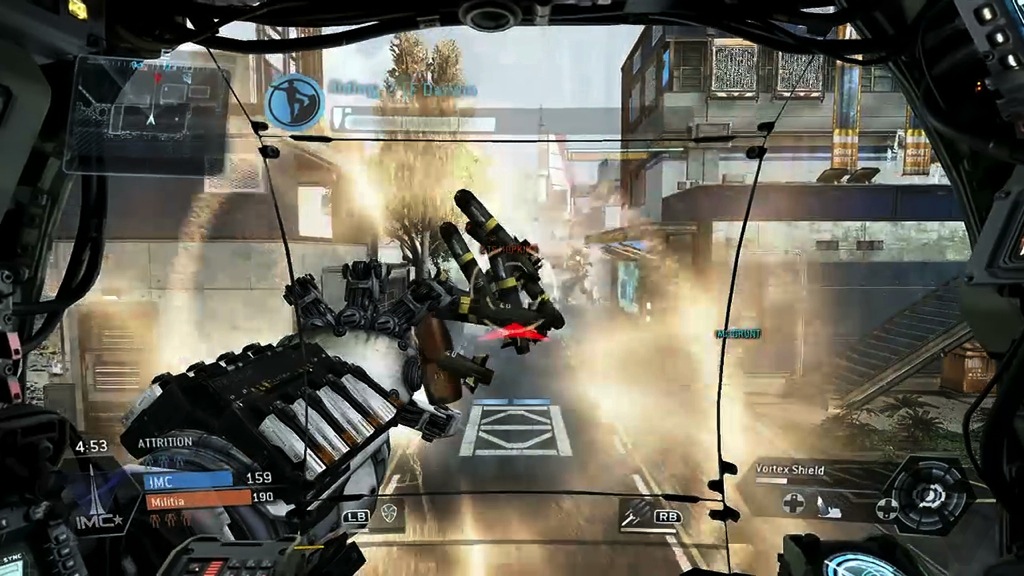 Titanfall is easier. It may only take one well-placed shot to take down a pilot, and it’s not particularly hard to do. Even the standard assault rifle and shotgun feel devastatingly powerful, and a glancing hit from a Titan weapon can kill you immediately. Jump into a Titan, however, and things change drastically: you can soak up serious damage and wreak havoc with missiles and cannons.

And yet facing an enemy Titan isn’t an exercise in frustration, like trying to take down a tank with your bare hands. The incredibly nimble pilots can dart through buildings where Titans can’t follow, use cloaking devices to avoid detection, attack from any angle with their jetpacks, even land on a Titan’s head and fire straight into its robotic cranium. Each pilot is also equipped with an anti-Titan weapon like a missile launcher, so you’ll always be able to defend yourself. It’s a breath of fresh air compared to games like Battlefield where you have to choose a particular class of soldier in order to have anti-armor weaponry.

Titans and pilots each have distinct advantages

Amazingly, the variety of ways you can kill a Titan doesn’t make them any less of a blast to play, in large part because they aren’t walking death traps when they go boom. Not only do the Titans give you enhanced situational awareness, audibly telling you when you’re outnumbered or about to take massive damage, but they also protect you from death by prompting you to eject before they explode. By ejecting, you fly into the sky high above the battlefield and fall right back into the fight again. By stringing together a few kills after landing, perhaps bounding off some walls and blasting foes as you do, you can quickly summon a new Titan and repeat your robotic rampage. "You ride this wave," relates game director Steve Fukuda.

But even if you’re not particularly skilled at the game, Titanfall is designed to keep you having fun, thanks in part to your AI friends and foes. They show new players where to go by establishing a visible battlefront, and provide relatively easy kills compared to going toe-to-toe with an actual player. They don’t feel incredibly intelligent, but they serve the same role as the grunts in Halo by making you feel like a rockstar. "They help newer players feel good about themselves, and they help great players feel like badasses," lead designer Justin Hendry tells me. They also help rack up Call of Duty-like experience points to earn new levels, weapons, and help reduce the delay before you can call down your next Titan from the sky.

Unlike Call of Duty, though, you don’t necessarily need a kill streak to unlock such a powerful machine. You get a new Titan every few minutes no matter what, a design decision that keeps games from feeling one-sided. There’s also a feature called Burn Cards that lets you take revenge on enemy players with powerful weapons and abilities you can only use for a single life. Some of the game modes even let you "win" even if your team is about to lose, by making it back to your dropship unharmed.

Over and over, I noticed game-design decisions intended to curb the pain points that typically frustrate players of these shooting games (particularly inexperienced ones), replacing unnecessary complexity with experiences that make sure gamers always have options in battle. From weapons that never seem to run out of ammo to the shoulder-mounted missiles and the projectile-reversing Vortex Shield that kept my Titan defensible even when I stopped to reload my quadruple rocket launcher, I never felt like I was unfairly outgunned. 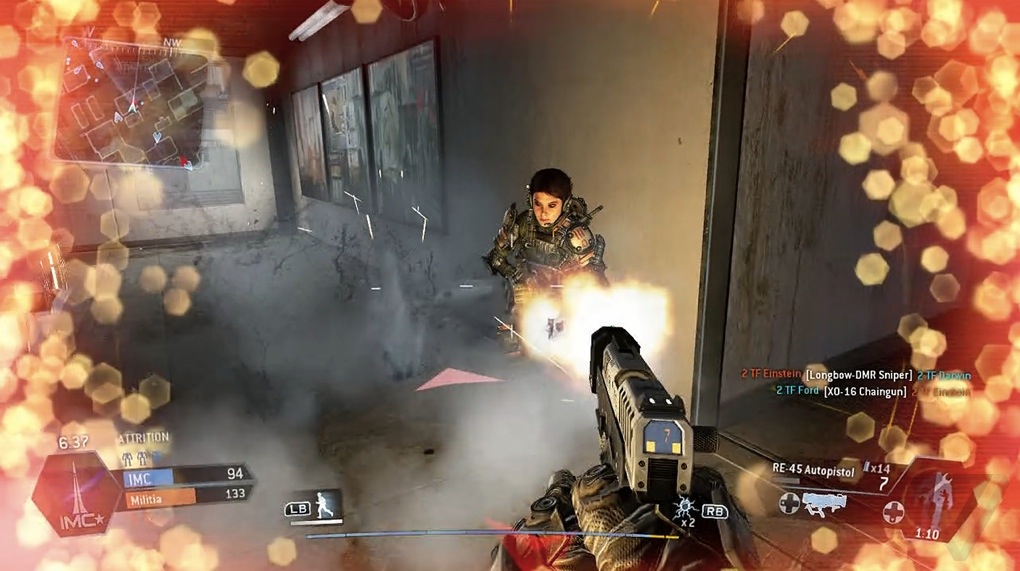 The question now is whether gamers will truly have enough options to stay engaged with Titanfall for the long haul, to get their friends to play, and — through word of mouth — become the killer app that justifies a $499 Xbox One purchase. Though what I’ve seen of the game’s multiplayer beta is incredible, it consisted of the same levels and weaponry that the company showed off at previous game conventions, and developers politely refused to speak about content not shown in the beta. They suggested that rather than build loads of guns and maps, they preferred to carefully craft a limited number of experiences. "Each weapon is built and designed to support a particular playing style," Hendry explains, and his words ring true. I just have to wonder whether the secrecy masks a potential lack of staying power.

For now, I’m thoroughly enjoying the game in front of me.

Blasted off the back of an enemy Titan by a puny pilot with a fully automatic pistol, I swore my revenge. I decided it was high time I tried the single-use rapid-fire grenade launcher I earned two levels ago, and sacrificed the Burn Card that would let me wield the powerful weapon. Respawning, two enemy Titans converged on my location, blasting my allied pilots into dust… but I was already up and away, dashing towards a wall. I leapt once, twice, bounded from wall to wall, and up to a rooftop vantage point where I could introduce both enemies to my little friend. I let ‘er rip.

Amidst the strewn fragments of my foes, I found my own pristine Titan waiting for me, encased in a beautiful bubble shield. I jumped in.