Of Microsoft’s many challenges in mobile, none loom larger than the app deficit: it only takes a popular new title like Flappy Bird to highlight what the company is missing out on. Windows 8 apps are also few and far between, and Microsoft is stuck in a position where it’s struggling to generate developer interest in its latest style of apps across phones and tablets. Some argue Microsoft should dump Windows Phone and create its own "forked" version of Android — not unlike what Amazon has done with its Kindle Fire tablets — while others claim that’s an unreasonably difficult task. With a new, mobile- and cloud-focused CEO in place, Nokia's decision to build an Android phone, and rumors of Android apps coming to Windows, could we finally see Microsoft experimenting with Google’s forbidden fruit?

Sources familiar with Microsoft’s plans tell The Verge that the company is seriously considering allowing Android apps to run on both Windows and Windows Phone. While planning is ongoing and it's still early, we’re told that some inside Microsoft favor the idea of simply enabling Android apps inside its Windows and Windows Phone Stores, while others believe it could lead to the death of the Windows platform altogether. The mixed (and strong) feelings internally highlight that Microsoft will need to be careful with any radical move.

Android is the mobile equivalent of Windows

Android is the mobile equivalent of Windows on desktop PCs — it’s everywhere. That growth shows no signs of stopping, and it represents a huge blockade for Microsoft’s mobile efforts across multiple market segments. iOS might still dominate developer interest for new apps, but Android has successfully bridged the gap on the smartphone side, something Windows Phone is still far from achieving. Android apps usually debut alongside their iOS equivalents, or shortly afterwards, and developers are clearly investing time and money on both platforms. For Microsoft, meanwhile, it’s a challenge of growing Windows Phone shipments and apps. Running Android apps on Windows Phone and Windows could serve as a Band-Aid.

Of course, this is a refrain we’ve heard before — the specter of BlackBerry’s failed effort to boost the relevance of its BlackBerry 10 platform by supporting Android apps looms large. Still, Microsoft is a different beast: it has the large backing of its enterprise, server, and cloud software sales to provide it with the cushion required to make radical moves. Nokia also ships considerably more smartphones than BlackBerry does. That doesn’t mean the prospects of running Android apps across Windows and Windows Phone are a guaranteed success story for Microsoft, but it may have the momentum to successfully co-opt Android that BlackBerry lacked.

While the latest rumors suggest that Nokia is significantly forking Android to push its own apps and Microsoft’s services to the masses with a low-cost handset, sources say that Microsoft’s plans could be far less involved. The company wants to enable Android apps on Windows and control the store that consumers download them from, but it’s unlikely that it will want to handle the complex job of supporting an additional platform. Instead, if such a plan goes ahead, it will likely involve a third-party "enabler."

Where might Microsoft go for assistance? Android on Windows is a muddled mess right now, but Intel and software firm BlueStacks might be good places to start. Intel is pushing its own Dual OS concept to let PC makers create hardware that runs both Android and Windows. Meanwhile, AMD has sided with BlueStacks — a company that Intel has even invested in itself — to allow users to run Android apps inside Windows with the help of an ARM processor embedded in some of its chips. BlueStacks has been enabling Android apps to run on Windows for a few years now, and it has signed deals with Lenovo and Asus to ship its software on their PCs. 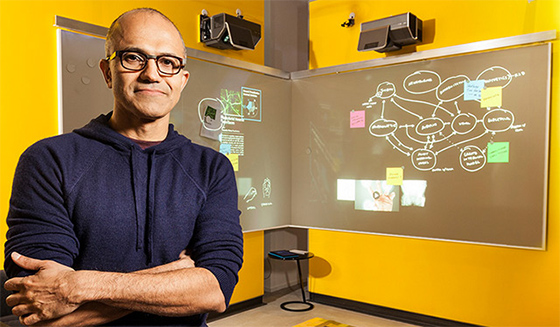 The Android decision will ultimately fall on the shoulders of Microsoft CEO Satya Nadella.

It’s remains unknown whether Intel or BlueStacks are in active partnership discussions with Microsoft. A BlueStacks representative refused to provide comment to The Verge, but sources familiar with Intel's plans have indicated that the chipmaker has been pushing Microsoft to provide Android apps in its Windows Store.

Regardless of who is involved, any official method for running Android apps on Windows and Windows Phone would need to be extraordinarily simple for consumers to understand and use. While the reality of virtualizing Android apps on Windows is far from simple, if apps were packaged up in a painless install method within the Windows Store and approved by Microsoft, consumers would be more likely to get on board. Then again, BlackBerry hasn’t had much luck winning anyone over, and Amazon’s Appstore is filled with out-of-date apps ferried over from Google Play.

Such an approach would also raise questions over how developers could tweak and manage their applications for Microsoft’s implementation and process, and it could confuse and alienate native Windows developers even further. There’s also a risk of developers giving up on Microsoft’s "Metro" apps entirely, settling for the easier option of app porting over building something entirely new. Microsoft would have to weigh up the technical aspects, partner considerations, and the effect on business models before any decision is made either way.

Why would Microsoft want to do any of this? The answer is simple: "embrace, extend, and extinguish." It’s a phrase Microsoft used internally to describe its own strategy for disrupting standards and competitors in the 1990s. While Microsoft has been trying every trick to convince developers to build for Windows Phone and Windows, it has to answer the mobile reality the company faces. Embracing Android and extending it to the Windows and Windows Phone app stores could help Microsoft temporarily in the app race, but it might also stem the flow of consumers choosing Android- and iOS-based smartphones and tablets.

Consumers sign in to Android devices with their Google accounts, and in to iOS with their iCloud accounts. By comparison, relatively few are using Windows 8 machines or Windows Phones to sign in to Microsoft’s own cloud services. Microsoft is making moves with OneDrive and other apps across Windows, iOS, and Android, but the overall app shortage on Windows and Windows Phone is the larger concern. If Android apps or even Office, OneDrive, and other services on rival operating systems help pull people over to Microsoft’s devices and platforms, then it might not matter if consumers are opting to use Android or "Metro" apps on Windows or Windows Phone, as long as they’re using a Microsoft account to sign in to their device and utilizing Microsoft’s services. Nokia’s upcoming "Normandy" Android handset will also push consumers towards Microsoft’s services, alongside having the benefits of being a low-cost handset running some popular Android apps.

Microsoft now has to decide on a big mobile bet

For Microsoft, the idea of Android apps running on Windows is as much about preventing more consumers moving to Android as it is building up consumer use of its cloud services. If Microsoft can convince more consumers to purchase its own Windows-powered devices because they now have access to key Android apps, then that might just help its own tablet and smartphone prospects. While any realistic implementation of Android apps on Windows will not likely be ready until Microsoft’s Windows 9 work is ready in 2015 at the earliest, if at all, Microsoft faces an ongoing battle over the cloud and the long, slow decline of the PC in consumer markets. The software giant is also considering free versions of Windows Phone and Windows RT to entice OEMs to produce devices, but embracing Android and enabling it could be the next step. Microsoft is never going to "extinguish" Android, but its long-term success requires that consumers look at its hardware and services seriously. Windows 8 was enough of a big risk on the PC side, but Microsoft now has to decide whether it wants to make an equally big — and unorthodox — bet on mobile.