Sunday night, San Francisco’s tech elite gathered downtown for the first night of the annual Crunchies, a conference and award show celebrating all things startup. A long line extended down the block leading to the Davies Symphony Hall, and private security guards checked tickets at the door. But a block away, a different kind of crowd was gathering. "Ellis Act out, rent control in," chanted Erin McElroy, leader of the Anti-Eviction Mapping Project. "Killing our elders is a damn sin." Protesters held signs that reworked the Crunchies into the "Crappies," a parody award show.

"We're protesting here because we don't think there's anything to be awarded," said Patricia Kerman, who was evicted by her landlord after living in San Francisco for more than 40 years. "They should be ashamed."

Rents have skyrocketed, evictions have risen

Over the last five years, rents in San Francisco have climbed an average of 12.3 percent a year, more than four times the national average. Many longtime residents have been displaced by rising costs, or simply evicted by landlords who can use California’s Ellis Act to remove tenants if they plan to convert the building or put it up for sale. Much of the blame for this economic displacement has fallen on the tech industry, which has been booming thanks to a strong IPO market. Kerman, who is retired, has been living in the city since 1970 and got her Ellis eviction notice this August. "They’re having an impact and doing nothing about it," she says of the tech companies. "It's an attitude of entitlement, of arrogance that's coming in, and that's just not San Francisco."

The backlash against tech companies has taken many forms. The most visible has been the battle over private buses, which companies like Google and Apple use to shuttle their workers from the city out to offices in the distant suburbs of Mountain View and Cupertino. The luxury vehicles, which have long used city bus stops to pick up and drop off workers, symbolized an elite that couldn’t be bothered to deal with the city’s underfunded and often strained municipal transit systems, the Muni and the Caltrain. Protesters in recent weeks prevented buses from parking, broke windows, and even began picketing tech employees at their homes. Google and Apple recently agreed to begin paying for their shuttles to use the public bus stops, but will only be shelling out $1 for each stop they make. "A dollar?" shouted activist Tommi Avicolli Mecca, the protest’s master of ceremonies. "Why don't they charge the tech companies millions a year and make Muni free?"

Perhaps because this event involved startups, not established tech giants, the tone was more satirical and less vitriolic. On the street at the Crappies, a protester headed towards the stage to accept a golden toilet brush. "The tax evader award goes to... oh my god... Twitter!" proclaimed the MC, who wore a sparkly top hat for the occasion. Subsidies for firms like Twitter, which recently unleashed a new flood of millionaires into San Francisco's streets thanks to its IPO, have angered longtime residents who feel the companies don’t give enough back. The award winner, waving his golden toilet brush, was dressed up to look like Twitter CEO Dick Costolo. "It's our town! We paid for it, we own it," he jeered. "I don't care if there are people here, that's progress, gramps. That's progress."

While rich techies no doubt drive up rents to some degree, another big part of the problem is that the housing supply simply hasn’t kept up with demand. Over the last decade San Francisco has added more than 75,000 new residents, but only 15,000 new housing units have been built. The city’s mayor, Ed Lee, has said he plans to add 30,000 new units in the next six years by increasing construction and repair. That will no doubt help, but unless there is a dramatic downturn in the Silicon Valley tech economy akin to the bursting of the dot-com bubble in 2000, the rising rents and influx of new residents are likely to continue. 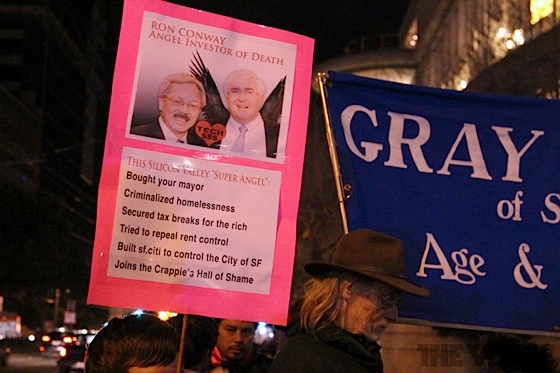 The tech industry, which for a long time resisted letting itself become the scapegoat, has begun accepting some responsibility. Ron Conway, the hyperconnected investor often referred to as the "Godfather of Silicon Valley," took the stage to tell attendees that their companies have a responsibility to improve life in their neighborhoods. "I want to bring another, different challenge to the tech industry, and that's to make sure every person in our region has the opportunity to be a part of the new economy," Conway said. "We may not agree with everything the protesters outside have to say, but they do represent an anxiety over a widening income gap. My message tonight is that we — that means all of us — must be leaders in tackling the challenges in housing, transportation, and education. We are in this together."

"An anxiety over a widening income gap."

After Conway, Theresa Preston-Werner, founder and CEO of the Omakase Charity, took the stage and announced what she called the Tech Cares movement. She called on attendees to commit to donating at least $10 a month to Omakase, which benefits a different charity each month. "There's been a lot of criticism lobbied at the tech industry recently," she said. "People are saying tech is really closed off, that we're insulated. Maybe that's exactly what's happening here right now ... But I don't think that's really our real story."

It was an olive branch, to be sure, but the protesters weren’t around to receive it. Last night, at least, the two sides seemed to be talking past one another. The protest crowd, which numbered around 60, barely interacted with the Crunchies crowd, and certainly didn’t get to hear any of the solutions offered up to the audience filling the seats at the symphony. "It's not focusing on tech workers as scapegoats, but tech CEOs," said SF district supervisor Eric Mar, as the demonstration broke up. "I wish some of the progressive tech leadership would come out and show support."