Senator Rand Paul (R-KY) has launched a class action lawsuit against the the Obama administration for its bulk collection of American phone records. In a press release, Paul said Obama has refused to stop a "clear and continuing violation of the Fourth Amendment," leading him to file suit on behalf of American citizens. The suit is also backed by Matt Kibbe, president of major conservative advocacy group FreedomWorks. "If you use a phone, you should care about this case," says Kibbe. Paul is a longtime critic of NSA surveillance and the Obama administration's covert military program in general, holding a 13-hour filibuster in early 2013 to protest American drone strike policies.

Paul, Kibbe, and lead council Ken Cuccinelli (also the former attorney general of Virginia) have published an op-ed at CNN explaining their position. With this lawsuit, they say, they are requesting confirmation "that the blanket collection of Americans' telephone metadata without reasonable cause violates the Fourth Amendment of the US Constitution" and assurance "that these programs be halted immediately and that all previously collected data be purged from government databases." The case would presumably include any American whose information have been collected as part of the NSA's metadata-gathering program, a number that's currently very nebulous.

Paul says he expects the case to quickly rise to the Supreme Court and that "the American people will win." Unfortunately for the American people, he's almost certainly wrong. So far, damages and injury from NSA data-gathering have been hard to establish even on an individual basis. Several groups have brought lawsuits against the administration by saying a particular individual organization or person has suffered because of surveillance. But even for Verizon customers, who have a leaked court order to back them up, there's no definitive way to tell whether the NSA actually collected metadata from them, and the claim is too hypothetical for many judges. If Paul wants to go forward with the suit, he'll need to calculate and prove similar damages for every single member of his class.

None of which, of course, have stopped Paul from trying to recruit 10 million people to "join the class action lawsuit" by sending their name, email address, and zip code. In theory, this shows that a large number of people have suffered similar harm and lets people opt into the suit, although nobody joining will be able to provide any information on whether they've been spied upon (and therefore qualify.) In practice, the charitable interpretation is that it's essentially a petition of protest. The uncharitable interpretation is that it's a fundraising and campaigning effort. Here's what you see after you sign up through Rand Paul's PAC. 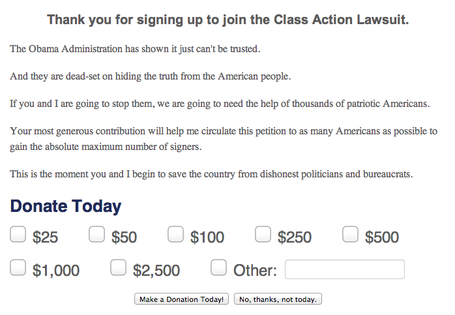 A more promising court case is Klayman v. Obama, in which a judge found the NSA's metadata-collection program likely unconstitutional. A similar lawsuit was dismissed not long after, but this conflict is much more likely to set up a Supreme Court battle than Paul's attempt at a class action case.